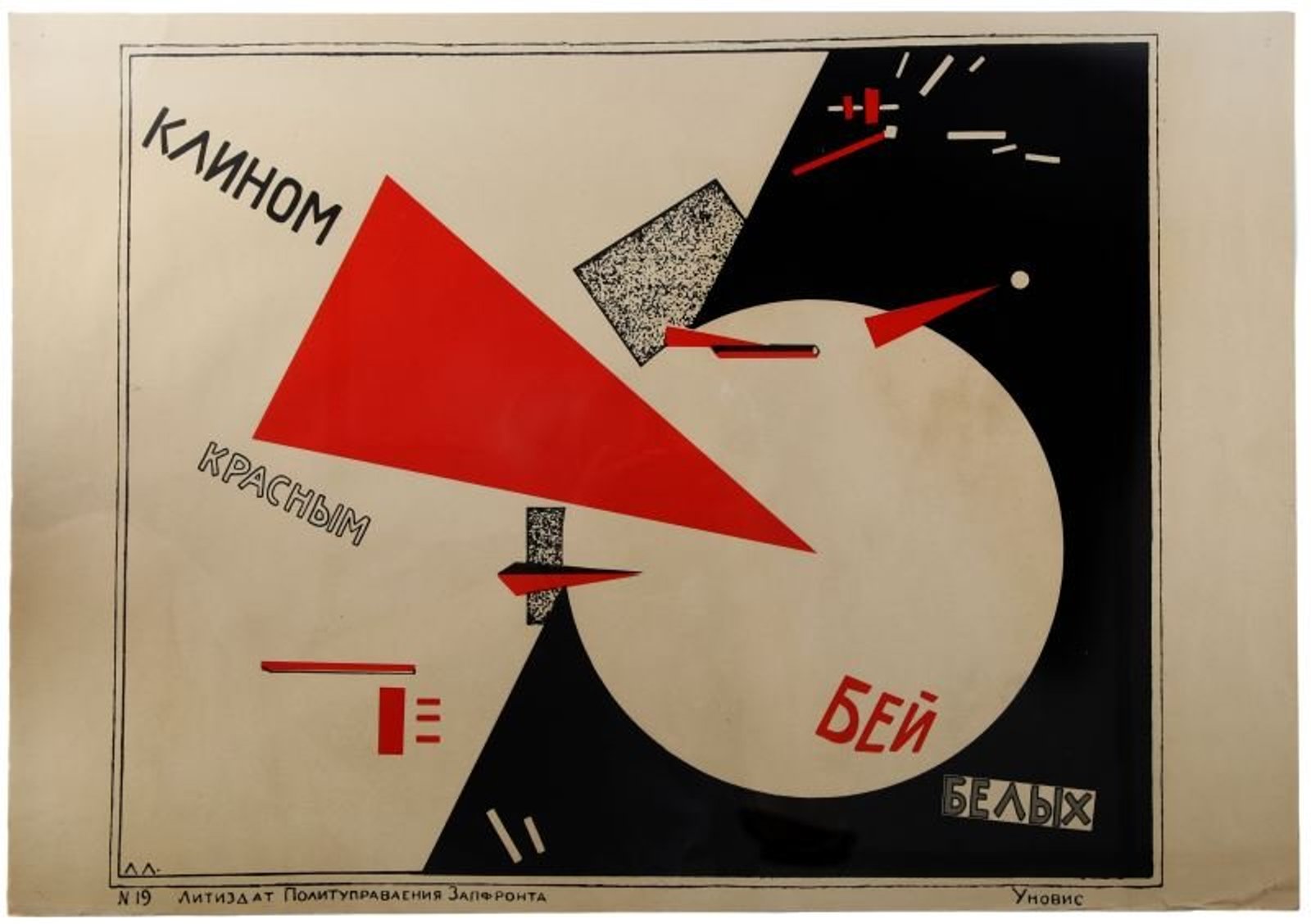 The Russian Revolution seems longer ago than a hundred years. Since that time, there was a second World War, the Holocaust, a massive, postwar reconstruction and de-colonization, successive U.S. wars against Korea and Vietnam, and dozens of smaller wars, each of a ferocity and destructiveness out of proportion to their geographic extent. (The war currently waged by Saudi Arabia—supported by the United States—against tiny Yemen has killed around 15,000 and made three million homeless.)

Since 1917, the center of world political power has shifted from the United Kingdom to the United States and now, increasingly, to China. (U.S. military hegemony remains intact.) Whereas the global class struggle was formerly fought within the Western metropole, it is now largely waged between the northern and southern hemispheres. Climate change has exacerbated existing interethnic conflicts in the southern hemisphere and along the periphery of north and south, and created multiple insurgencies, giving rise to sporadic terrorist outrages against civilians almost everywhere. 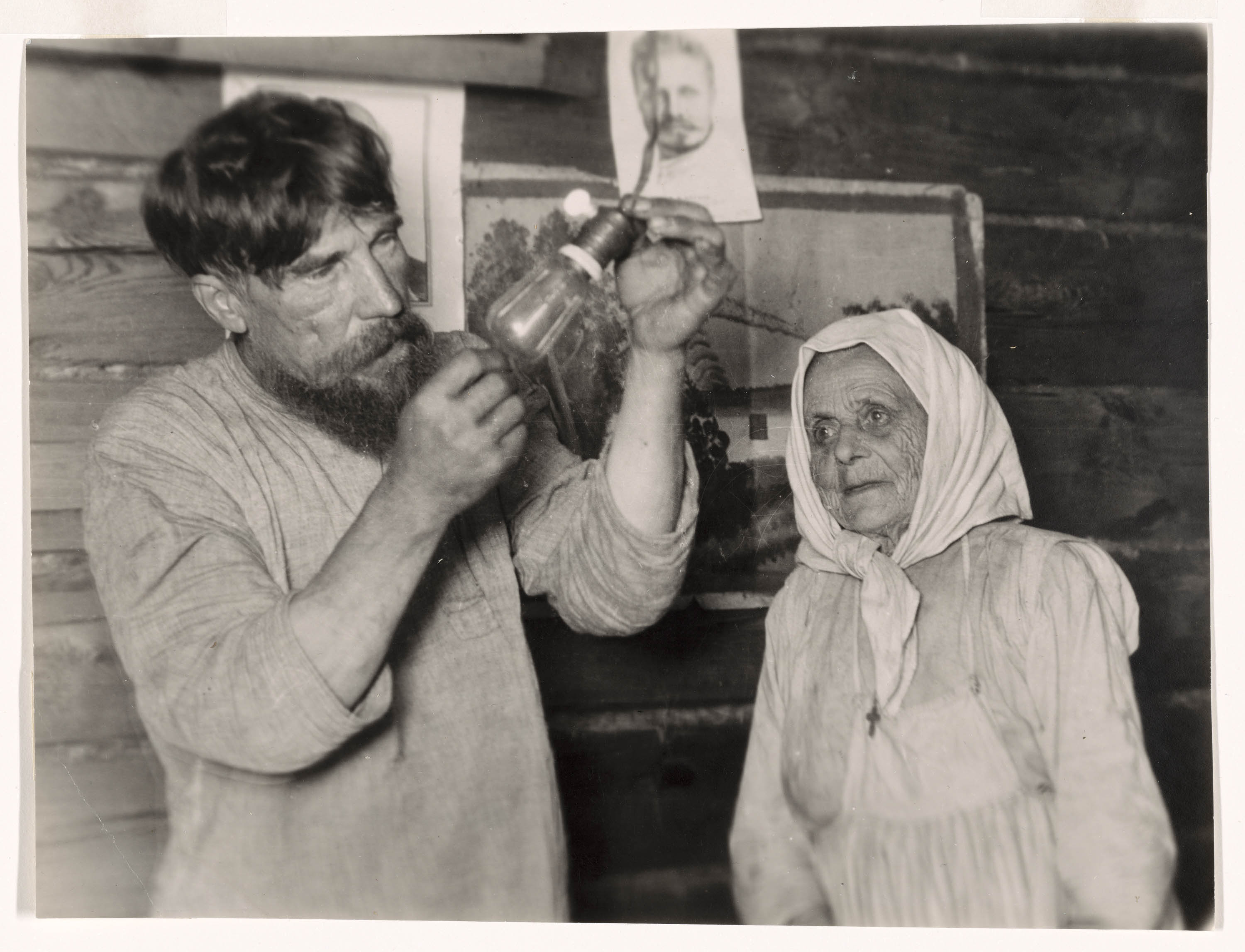 In the domain of economics since that fateful October, it’s la plus ça change. For a brief interlude, coincident with the Great Depression and post-WWII reconstruction, global wage inequality declined. But since the recession of 1973 and the neoliberal onslaught of the Reagan and Thatcher regimes, income inequality in the United States and other capitalist democracies (plus Russia), has risen to, or even exceeded the level of the Gilded Age that preceded the Russian Revolution. The world’s richest eight people, according to an extensively-researched 2016 Oxfam paper, possess as much wealth as the 3.8 billion who comprise the poorest half of the entire global population. A revolution has never been more needed but never been more remote a prospect.

And yet the exhibition at the Art Institute, “Revoliustiia! Demonstratsiia! Soviet Art Put to the Test” conveys a heady contemporaneity. It proposes revolution as a vital and viable prospect and the future as an open question. Holding in abeyance the debacle that followed the rise of Stalin—forced collectivization, famine and the purges—it addresses two questions: What does it mean to reconstruct a society and economy from the ground up; and is it possible, under conditions of modernity, to renounce the bounded, bourgeois individual of the European Enlightenment and create a new, collective identity? (This post-revolutionary person would not be a feudal subject subordinated to God and Tsar, but a corporate subject responsible to fellow workers and peasants, with the state functioning as facilitator.) “Revoliustiia!” highlights the art and visual culture that addressed those questions in the immediate aftermath of the Russian Revolution, and in so doing, invites us to ask how we would conduct an equally ambitious reconstruction in the future.

Eschewing a chronological installation, the exhibition is constructed like an orrery, with nine planets in orbit around a sun. The satellites are named Battleground, School, Press, Theatre, Home/Storefront, Factory, Festival, Exhibition and Demonstration, with the celestial body in the center taking the form of a speaker’s tribune and a small film theater representing agitation and propaganda. The reason for this spatial configuration is provided both in the exemplary catalogue and the installation itself: far from being isolated organisms, people are always “interpellated” (a phrase used by Marxist philosopher Louis Althusser) through numerous social institutions such as the nine cited above. The life of an individual and the progress of a revolution, in other words, cannot be conveyed by a simple narrative; they must instead be seen as a force field of attraction and repulsion, affinity and resistance. 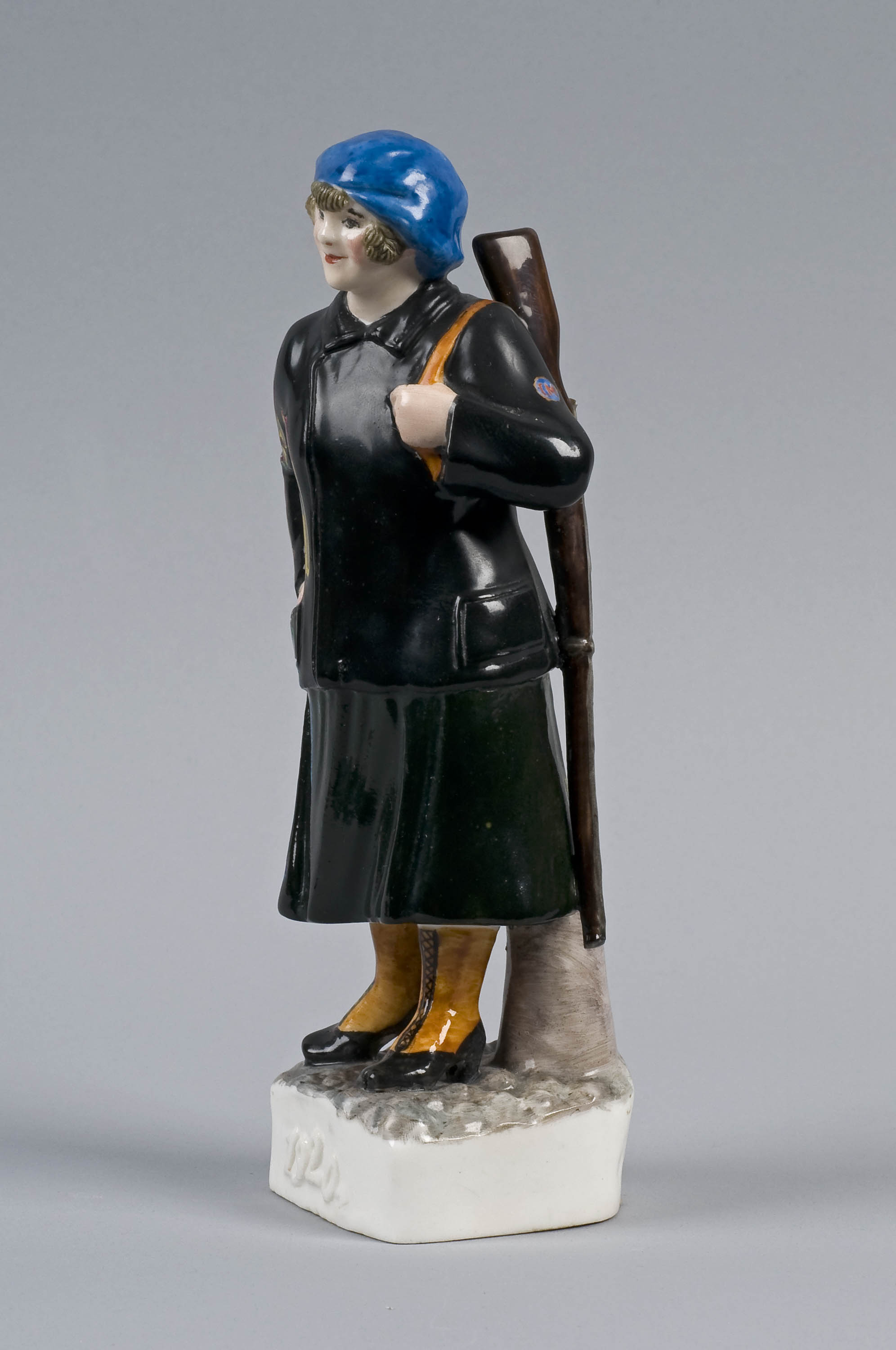 For example, in the section called “Battle,” we see photographs, posters, broadsides and flyers that exhort Russian workers and peasants (the vast majority of the population), to rise up and defeat the enemies of the October 1917 Bolshevik coup. (A liberal revolution in February led to the Tsar’s abdication in March.) The fact that resistance against enemies both domestic and foreign (including the United States) lasted until 1922 meant that war and its rhetoric—unity, violence, self-defense, homeland and sacrifice—infiltrated all aspects of daily life and consciousness. El Lissitzky’s famous broadside lithograph titled “Beat the Whites with the Red Wedge” (1920) was therefore not the purist “Suprematist” composition it is sometimes taken for in textbooks. Far from extolling the supremacy of feeling, it promoted action. The mass of the nation is represented by a solid red triangle, the most acute angle of which pierces, and thereby divides and destroys the white (counter-revolutionary) circle. Gustav Klutsis’ photomontage “Electrification of the Entire Country” (1920) is similarly geometrical. It shows Lenin—in plain clothes and a flat cap—like a colossus bestride the globe. He endorses the new, modern art and architecture beneath him—there is no classicism or academicism in evidence—that was endorsed by the Soviet government and its State Free Art Workshops in 1919. That national stance would enable some of the greatest achievements of visual art of the last century, including works by Tatlin, El Lissitzky, Popova and Rodchenko, many of which are included here.

The role of agitation and propaganda in the revolution is made explicit in “Battle” (discussed by Kathleen Tahk in her fine catalogue essay), but also in the “Press,” “Factory” and “Festival” sections of “Revoliustiia!” The word propaganda today conveys a sinister meaning. It was, of course, the specific brief of Nazi Minister of Propaganda Joseph Goebbels from 1933-1945. It is also sometimes invoked in discussions of Russian efforts to affect the outcome of the 2016 U.S. presidential elections, as well as daily lies told by the current U.S. president, his press secretary and cabinet members, for example, the “middle-class” tax cut and “failed Obamacare.” However, in the early Soviet context, the term propaganda, like its sibling “agitation,” meant recognition of the situated nature of truth and the dissemination of useful knowledge. While bourgeois (or capitalist) education taught universals, Bolshevik education instructed workers and peasants about historical particulars: the struggle against the Tsarist Whites and their international, capitalist abettors; the necessary solidarity between workers and soldiers; the value of literacy; and the need to produce food and materiel for the Soviet military.

In the domain of propaganda and agitation, Klutsis, Rodchenko, El Lissitzky and the filmmaker Dziga Vertov were the masters, though there were many others almost equally accomplished. (The greatest of all Soviet filmmakers, Sergei Eisenstein, is inexplicably absent from the exhibition.) Klutsis’ designs for “agitational stands,” “radio-orators” and “tribune kiosks” from 1922, one of which is reconstructed at the center of the exhibition space, are crazy concatenations of red, black and white beams, platforms and wires that would at once diminish the individuality and accentuate the authority of the speaker. Amplified through a large trumpet or megaphone, the orator would disappear and the message of proletarian unity prevail. Vertov’s films, including “Kino-Week” (1919-20), “Kino-Eye” (1924), “Kino Pravda” (1923) and “Man with a Movie Camera” (1929) were alternately romantic and mechanomorphic. They turned viewers into peasants wielding scythes, factory workers maintaining an assembly line, and film directors aiming the camera lens at the dynamism of revolutionary life.

“Revoliustiia! Demonstratsiia! Soviet Art Put to the Test” asks a lot of its visitors: that they temporarily forget the mostly tragic denouement of the Russian Revolution; that they forgo the comforting uni-directionality of most museum exhibitions; and that they read many explanatory texts while still attending to the main attractions: the exhibited paintings, drawings, posters, sculptures, prints, films, photographs and models. But the reward is great. Most of all it consists of the image of one society changing itself—almost overnight—into another, and the dream that a similarly profound revolution (with a happier ending) might occur here in the future.

“Revoliutsiia! Demonstratsiia! Soviet Art Put to the Test” is at the Art Institute until January 15, 2018.