41
Shea Couleé
Fashion Designer and Filmmaker, Miss Shea Couleé
Jaren Merrell attended Columbia College to study costume design. “Drawing inspiration from theatrical productions like ‘Aida’ and supermodels of the nineties like Naomi Campbell,” and immersing himself in the contemporary dance world combining his two passions: performance and fashion design, Shea Couleé was born. Since then, as one of Chicago’s hardest-working drag queens, the ingenious performer, social media influencer and RuPaul’s Drag Race contender has explored creative paths between performance and filmmaking, such as “Lipstick City,” a short film she wrote, co-produced, directed and starred in, and her latest venture, Couleé-D, a visual EP in collaboration with VAM Studio. 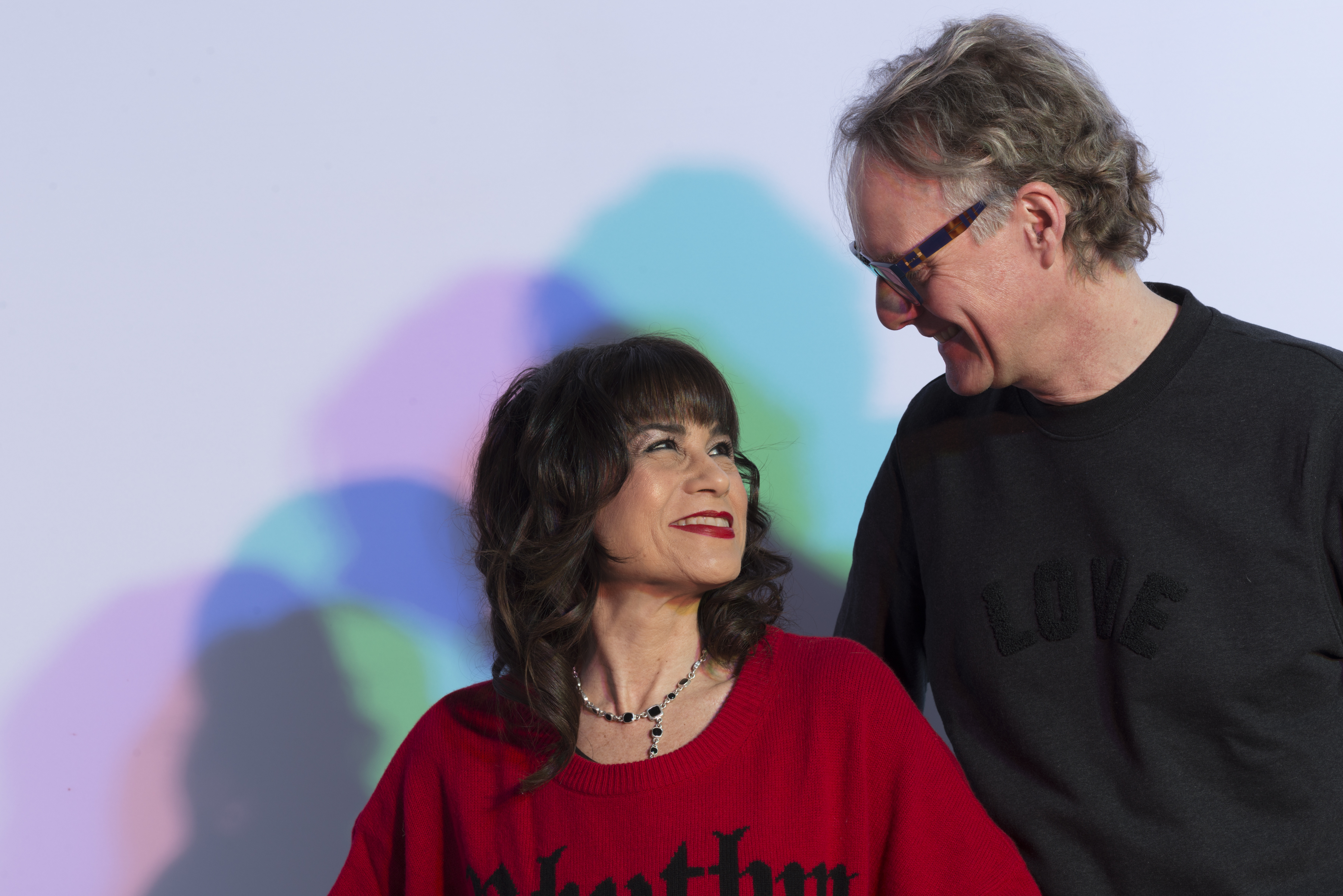 42
Peter and Sharon Exley
Co-Founders, Architecture Is Fun
More than anyone in Chicago, Peter and Sharon Exley show that not only can good architecture be made while wearing shiny pants, it should be made while wearing shiny pants. The recent accolades—AIA Chicago’s 2017 Firm of the Year—and a slew of finished projects demonstrate that their unconventional approach to practice is paying off. Beyond this, Sharon and Peter are educators, selfless resources, and friends to architects across the city and beyond. 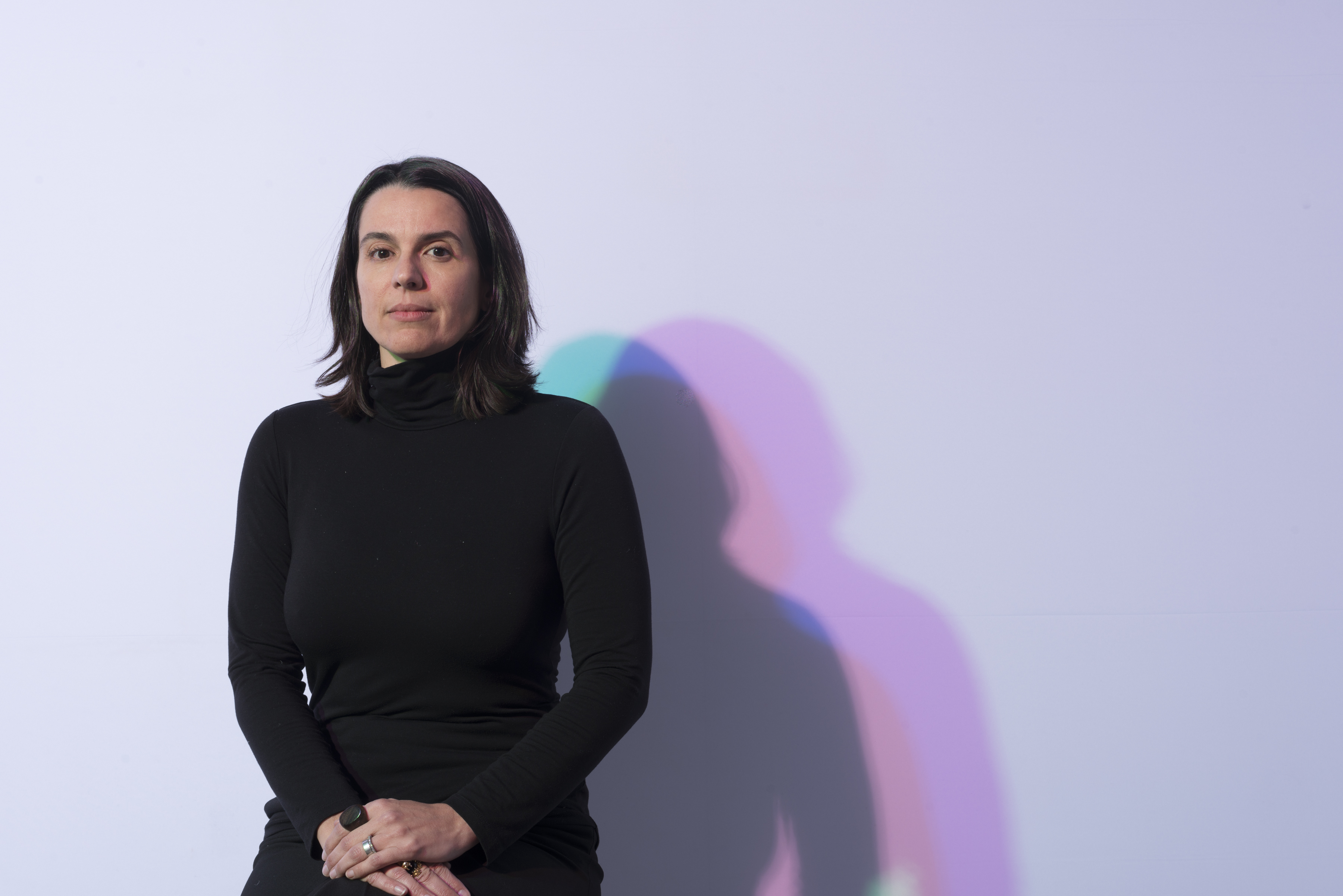 43
Renata Graw
Graphic Designer and Founder, The Normal Studio
Working with partner Jeremiah Chiu under the umbrella of Plural, the team worked with clients including WBEZ’s Curious City and the University of Chicago’s Arts + Public Life, among other gallery and visual art clients. Today, under the flag of The Normal Studio, former Plural partner Renata Graw thinks of her work as “pretty normal, but I believe sometimes normal is important.” Rooted in a desire for design to become more available, and for its users to consider the social possibilities of the discipline, Graw, part of the interdisciplinary team that spearheads the exhibition design for the Obama Foundation Center—a campus for active citizenship, inspiration and empowerment in Chicago’s South Side— sees similar shifts in its future of the field. “Design is both a reflection of the present and a desire to create something new. I see a democratization of design, we all have access to the same tools, so designers should focus on ideas that move culture and society forward.” 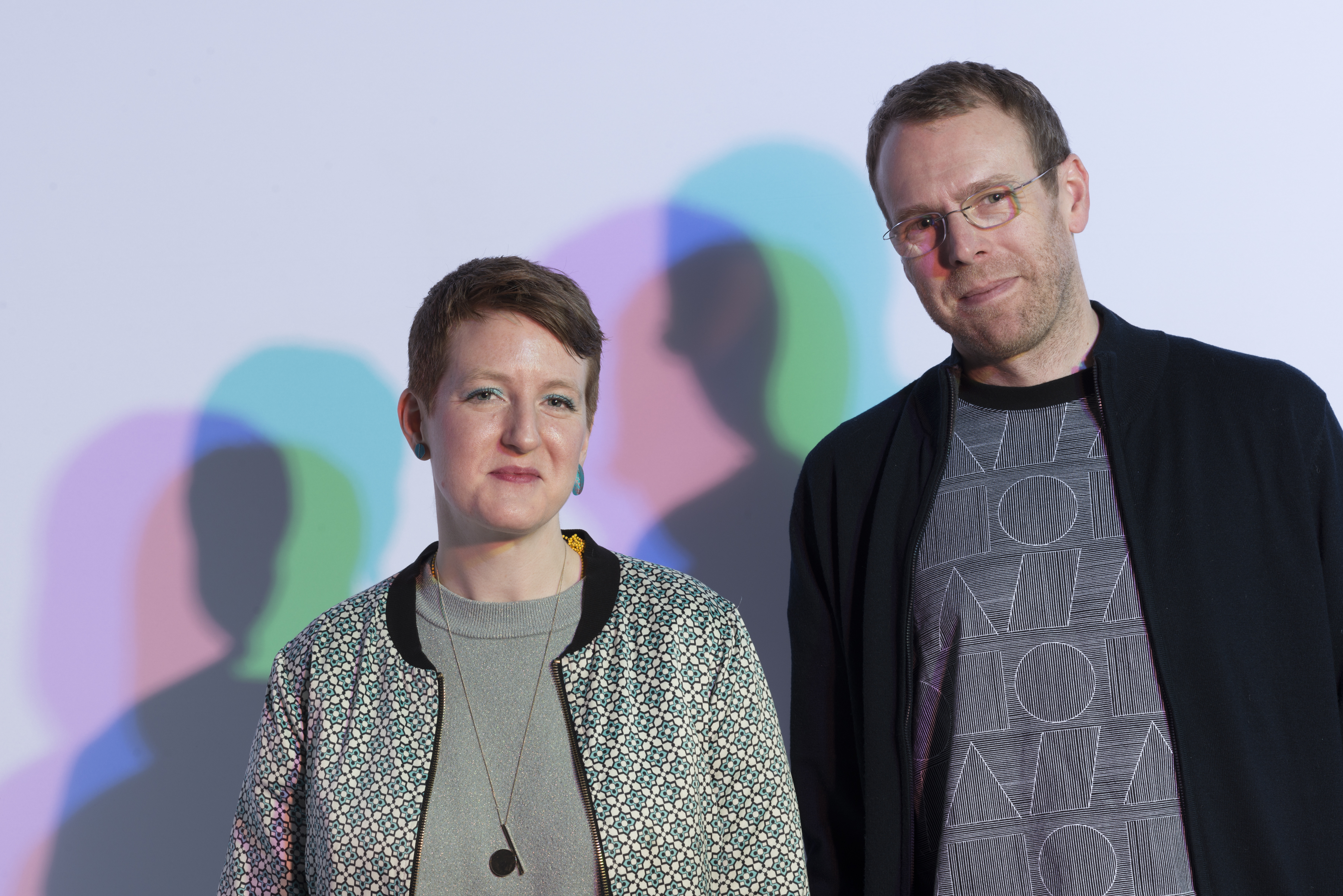 44
Tim Parsons and Jessica Charlesworth
Object Designers and Partners, Parsons & Charlesworth
That Tim Parsons and Jessica Charlesworth connected their lives and their practices with an ampersand is a reflection of a dry variety of social commentary that, in their native England, used to be called droll. The designers, who were featured in a solo exhibition at the Chicago Cultural Center that opened at the end of 2016,  teach at the School of the Art Institute of Chicago, where that kind of post-irony—literate, a little arch—informs broader curricular concerns of cultural relevance, the environment, decay. It isn’t gallows humor but it comes close in oddly gleeful objects designed to greet an imaginary apocalypse. Or consider the heaviness—physical and metaphorical—of an object that was an audience favorite at the CHGO DSGN exhibition: an archetypal patio grill sealed up with a marble top, a symbol of suburban banality upcycled into existential absurdity. 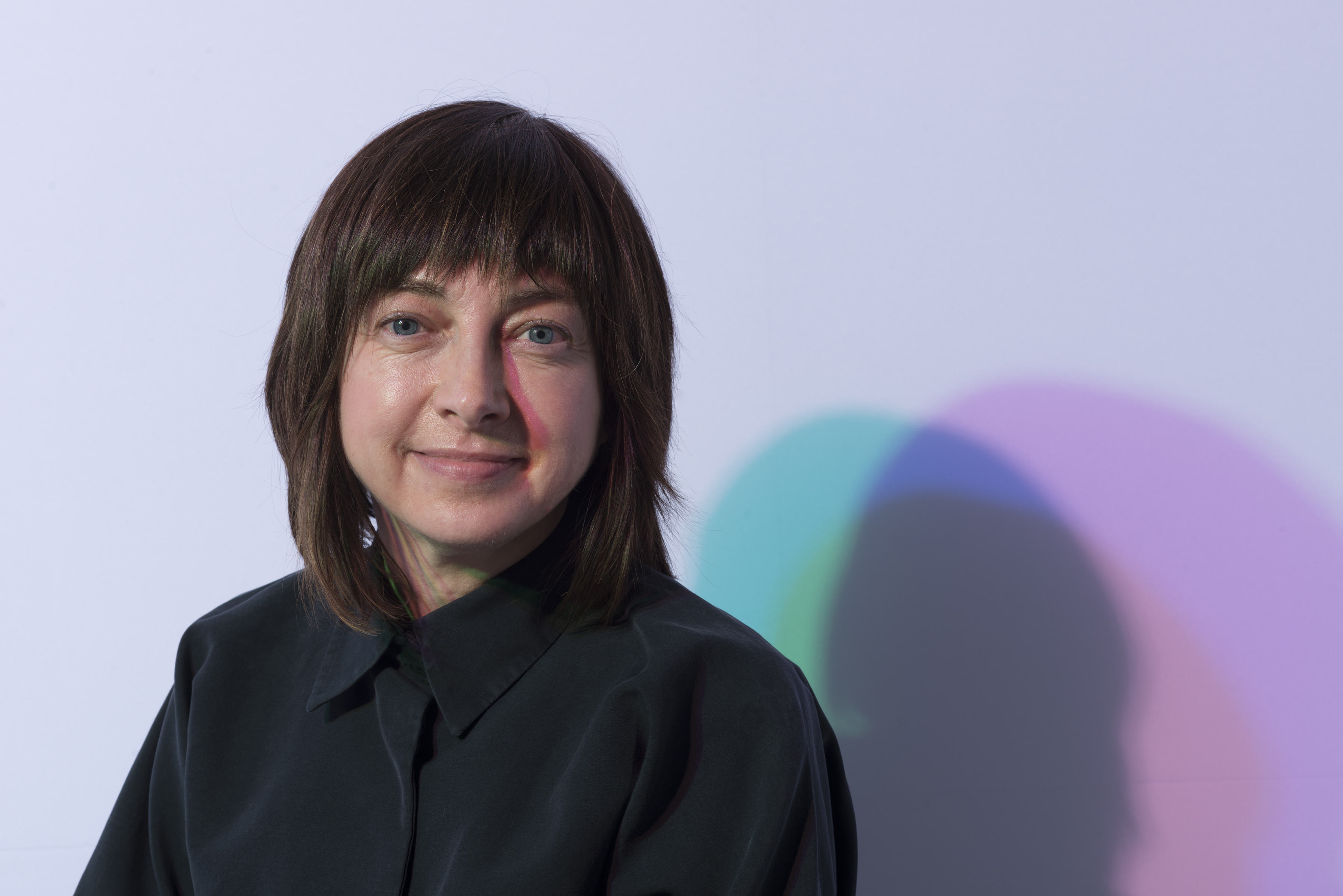 45
Cheryl Towler Weese
Design Director and Founder, Studio Blue
Studio Blue’s civic-minded practice has come to shape the public’s perception of innumerable museums, universities and non-profits. Recently, this included the Chicago Public Art Plan, which proposes a new vision for public art. But it’s not just Chicago’s prestigious institutions that have taken notice, as clients from around the country import Studio Blue’s unique abilities to translate an institution’s needs into visual language. Studio Blue’s founder and director of design Cheryl Towler Weese’s dissemination of ideas and mentorship don’t stop at the studio: she’s also an associate professor and director of graduate studies in graphic design at UIC. 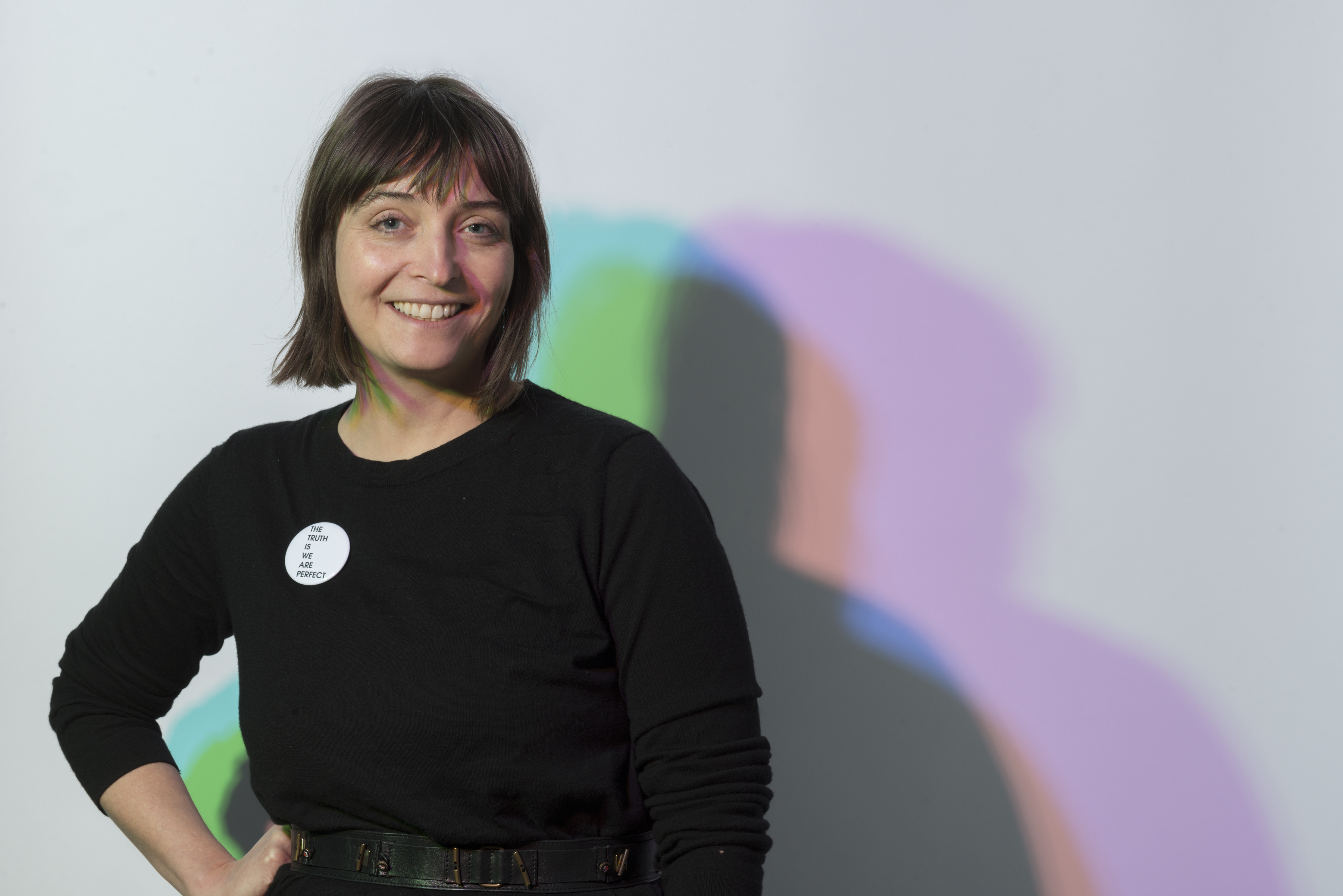 46
Christen Carter
Founder and President, Busy Beaver Button Co.
Begun as a one-woman operation in Christen Carter’s college apartment more than twenty years ago, the Busy Beaver Button Co. stays busy. The custom button business and its now-twenty-five-plus employees brings together artists, designers and makers, and creates millions of buttons annually in collaboration with bands and record labels, breweries, museums, small businesses, and creative individuals. Carter, still a maker at heart, believes in the power of collaboration. “One of the things I love about Chicago is how people seem willing to help each other out,” she says. “Collectively, we share information and resources as well as collaborate with one another and just inspire.” As for her own source of inspiration? “People together working to make positive differences and beatboxing,” she says. 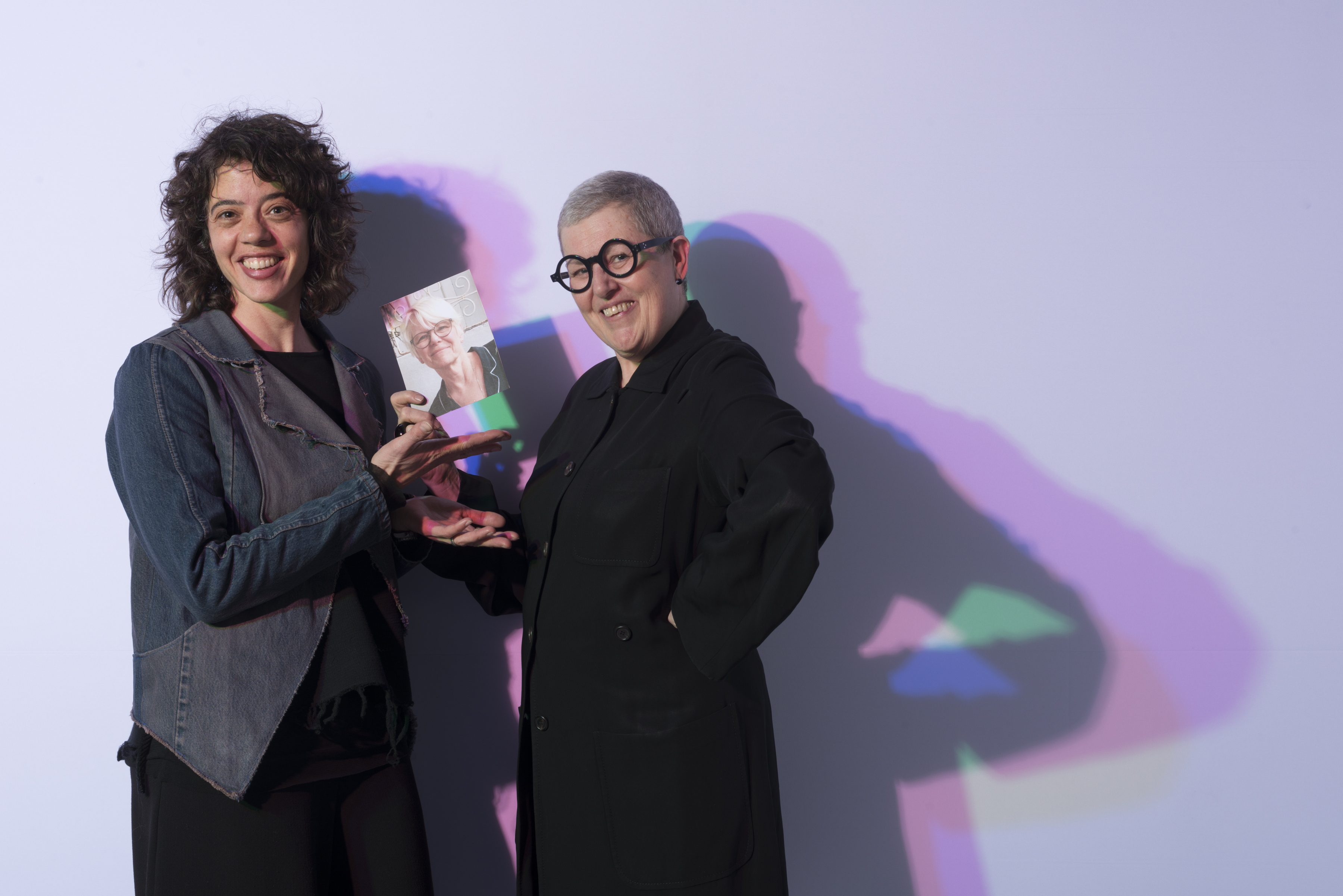 47
Andrea Reynders, Gillion Carrara, Anna Brown
Partners, we are MATERIAL
Individually, they are remarkable professionals in their field: fashion designer Anna Brown is a stellar alum from the Chicago Fashion Incubator at Macy’s; Andrea Reynders is the design director at the Incubator and professor emeritus of the School of the Art Institute of Chicago’s Fashion Department; metalsmith Gillion Carrara is the founding director of the school’s Fashion Resource Center and faculty member. United by mutual admiration and commitment to an artisanal approach to clothing and accessory design, they created we are MATERIAL in 2017, a design collective which endeavors to create gatherings that address aspects of the design practice, such as ideation, collection design and material sourcing. “Our intent is to connect designers and artisans who manufacture locally with current and new supporters to rekindle the designer-patron relationship in a more meaningful way,” says Brown. 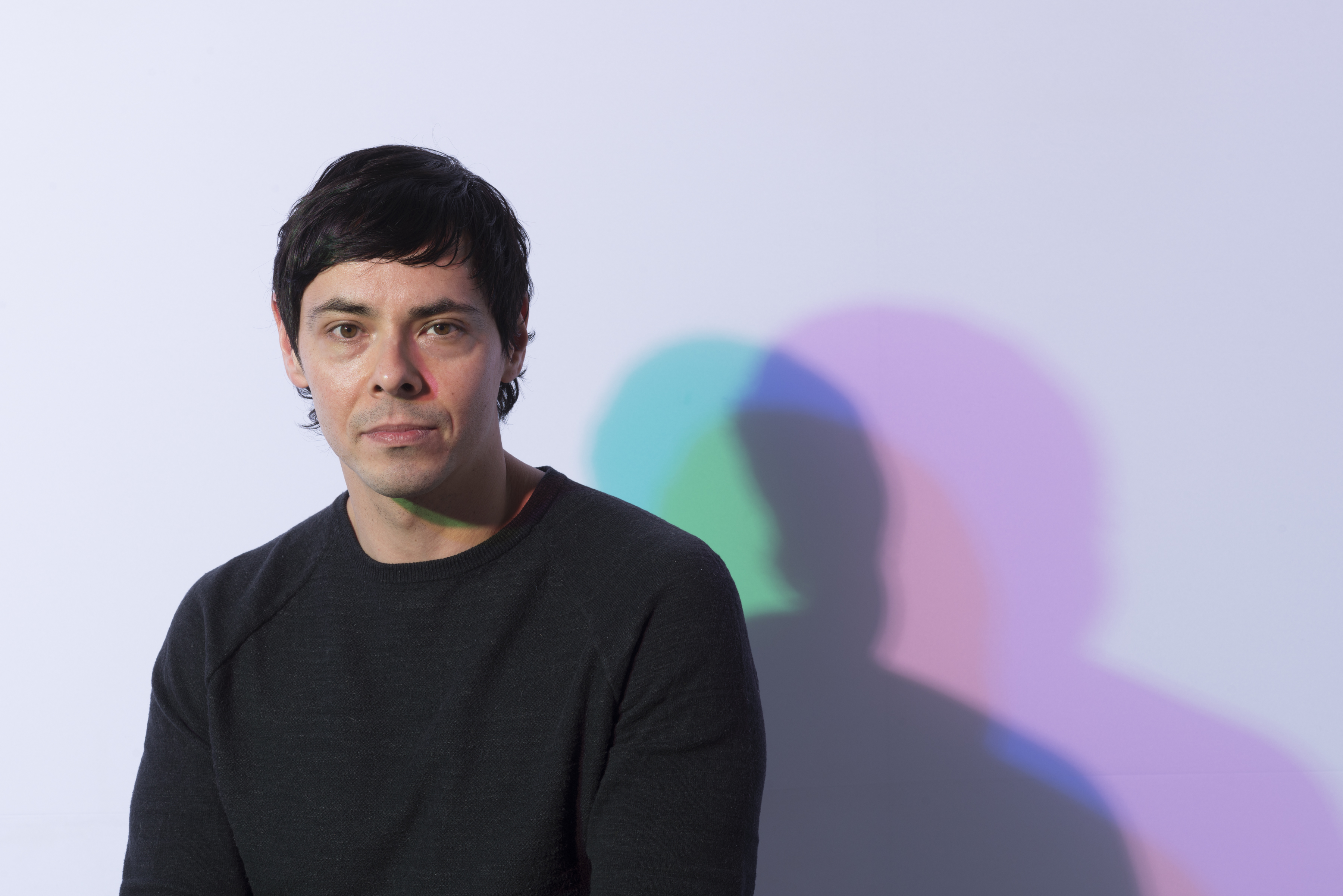 48
Fred Sasaki
Artistic Director, Poetry
As the artistic director of 105-year-old Poetry magazine, Sasaki has formulated a fresh visual identity for the publication, such as introducing the likes of now-Paris-based cartoonist Laura Park to the coveted cover spot. Known throughout the Chicago scene as a “connector,” he sees design as one small element within his repertoire: “I’m a design midwife. A lot of my work is spent nurturing art and human relationships, and I’m particularly interested in crowning Chicago art and literature,” Sasaki says. “My role is to support, care for and advise. I help create many distinct things like books and magazines, live events and parties, festivals, exhibitions, educational classes, product marketing and startup non-profit organizations. Every project demands that vital decisions be made, and my hope is to help without making it about myself.” 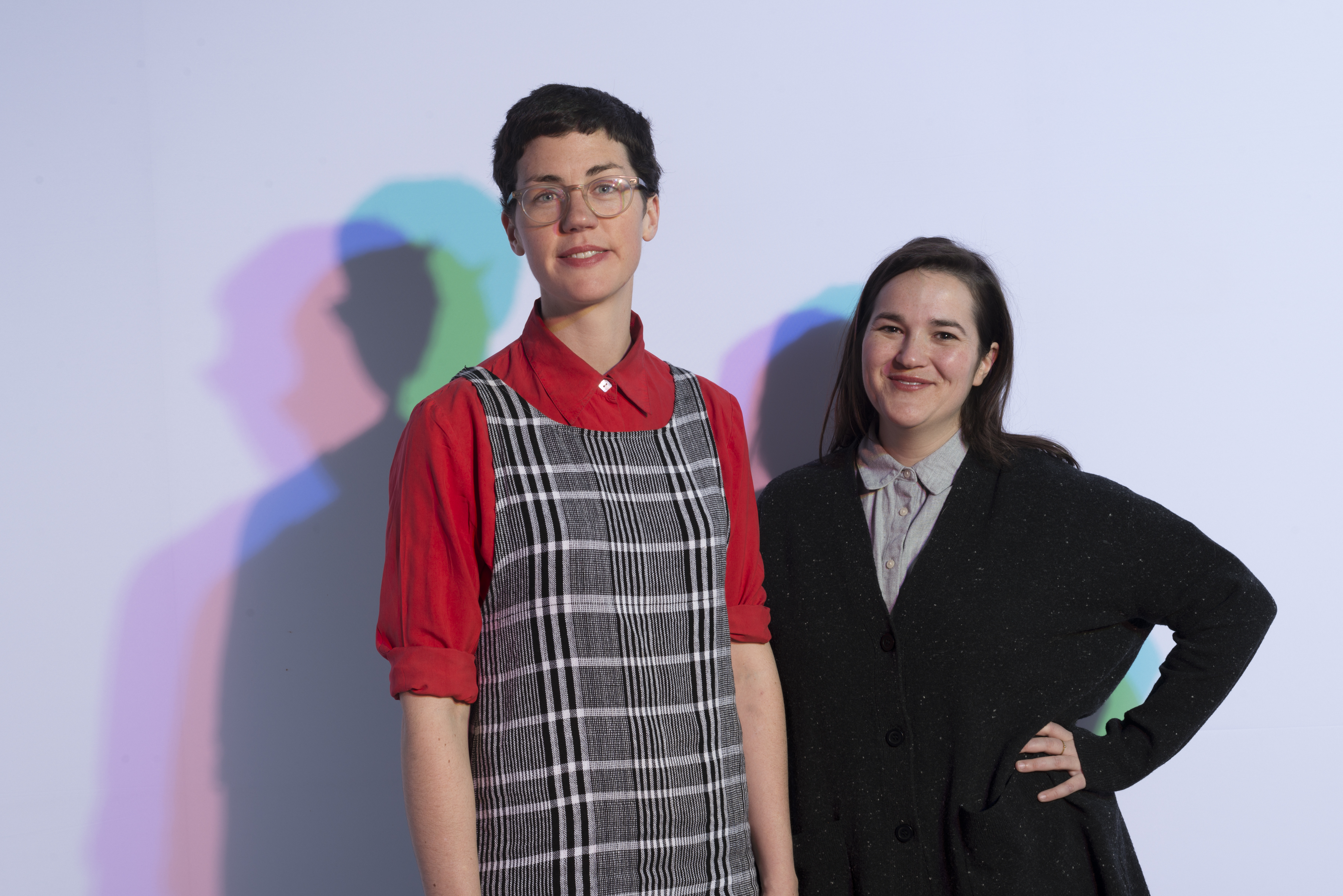 49
Emily Winter and Matti Sloman
Artists and Founders, The Weaving Mill
After getting MFAs in textiles at Rhode Island School of Design, Emily Winter and Matti Sloman wanted a space to continue to experiment with the medium. In the summer of 2015, they moved into an existing textile shop in West Town, previously run by Envision Unlimited, a nonprofit organization catering to individuals with intellectual and developmental disabilities. Besides offering an open studio and handweaving classes to Envision clients, the pair also run an annual artist residency program, collaborate on projects with visiting artists, create limited runs of textile objects, and design and produce textiles for companies such as Rejuvenation, Unison, Rebecca Atwood and Ace Hotel. 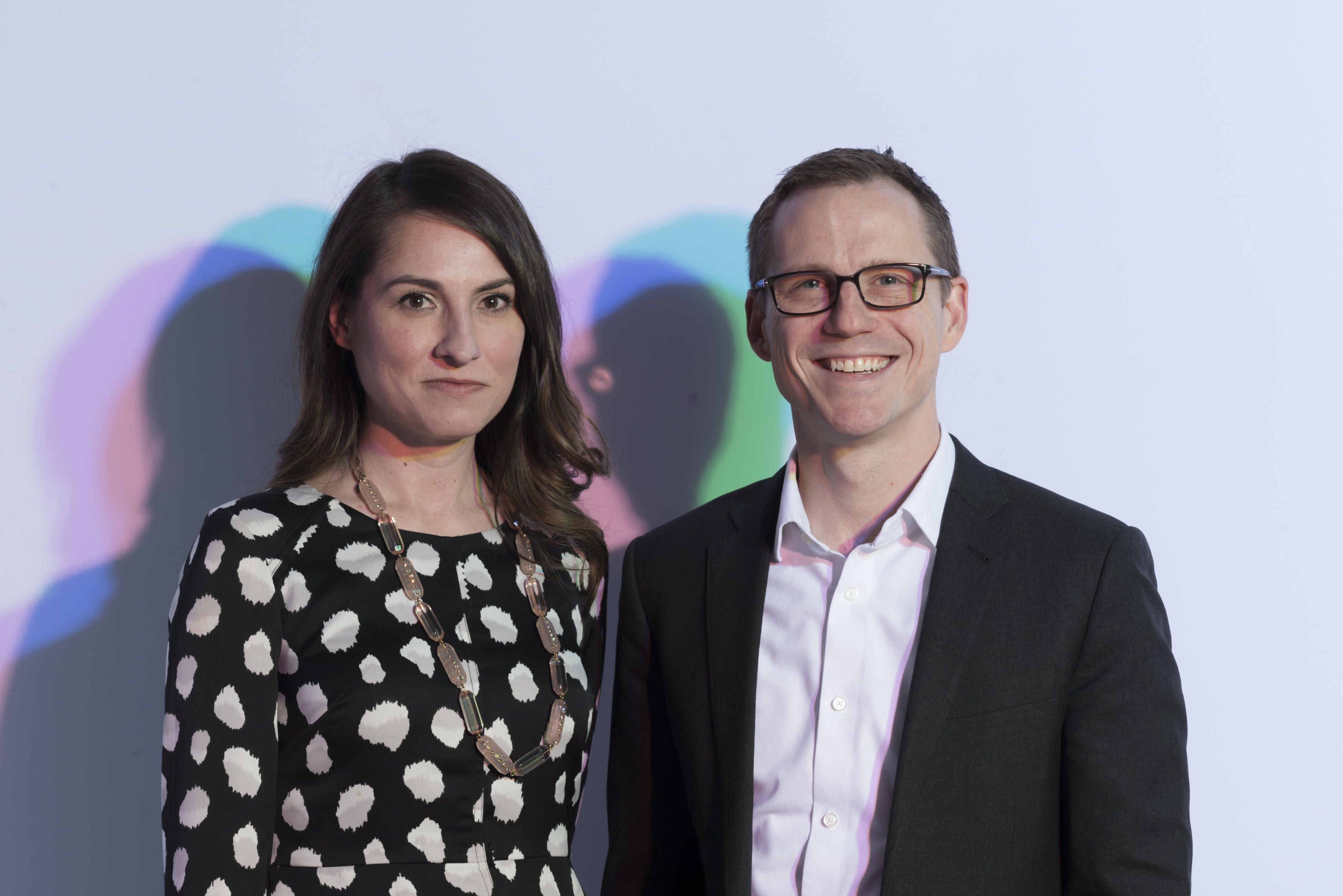 50
Stewart Hicks and Allison Newmeyer
Co-Founders, Design with Company
Among the many recent accomplishments of Stewart Hicks and Allison Newmeyer, their work exploring the Chicago Steel Frame building technology for the 2017 Chicago Architecture Biennial stands out. Their assault on traditional architecture with social media as battleground has abated, although they continue explorations through their teaching work at University of Illinois Chicago as well as curatorial work.