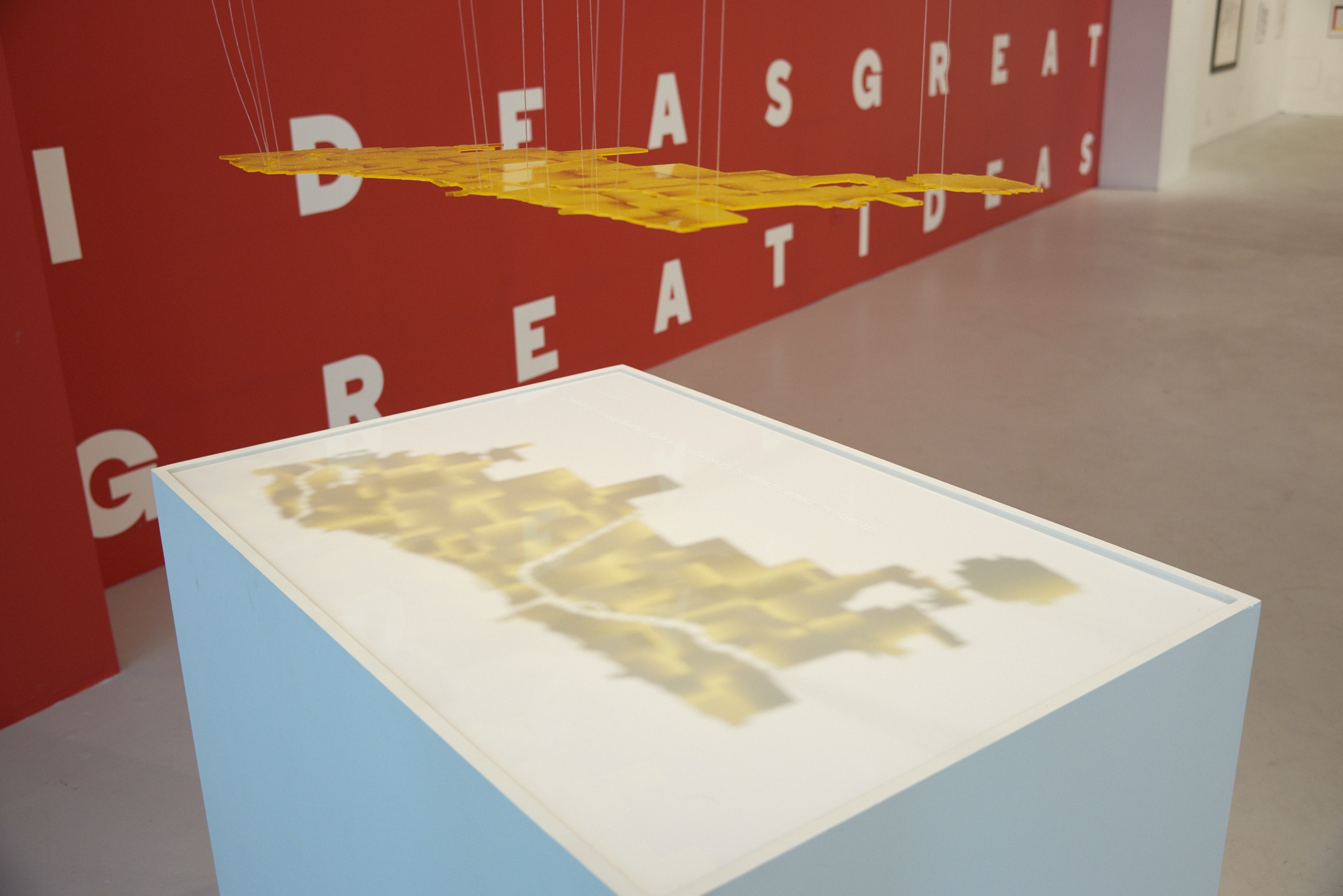 While it’s generally accepted that Chicagoans care and know about the city’s treasure trove of architecture, recognition for its leadership in the other design disciplines—environmental, industrial, communications—lags behind. Where, you might ask, is the love for its role in the printing arts or furniture manufacturing and so many other non-architectural design arenas? Part of the mission of the Chicago Design Museum (CDM) is to correct this. “It’s about promoting a greater awareness of design in general but also about its role in building community: design changing the world for the better.” says Lauren Boegen, museum director of exhibitions and collections. Certainly “Great Ideas of Humanity: Out of the Container” speaks to this mission, cleverly mining one of the many all-but-forgotten remnants of Chicago’s design legacy for its relevance today.

Following World War II, paperboard manufacturer Container Corporation of America (CCA) established itself as a progressive voice in American industry, adopting cutting-edge attitudes toward design and social responsibility years before the mainstream. Its founder, Walter Paepcke and his wife, Elizabeth, the unfortunately nicknamed “Pussy,” were important tastemakers and patrons of the arts responsible for, among other things, the Aspen Institute and its progeny. CCA’s advertising series “Great Ideas In Western Man” ran in the leading business magazines from the 1950s through the 1970s under the auspices of Herbert Bayer, who Paepcke brought to CCA from the Bauhaus school. Never mentioning the company’s product, the ads instead paired pithy wisdom of western philosophers with imagery from important contemporary artists and designers, resulting in what was, conceptually, America’s first sophisticated image advertising campaign. 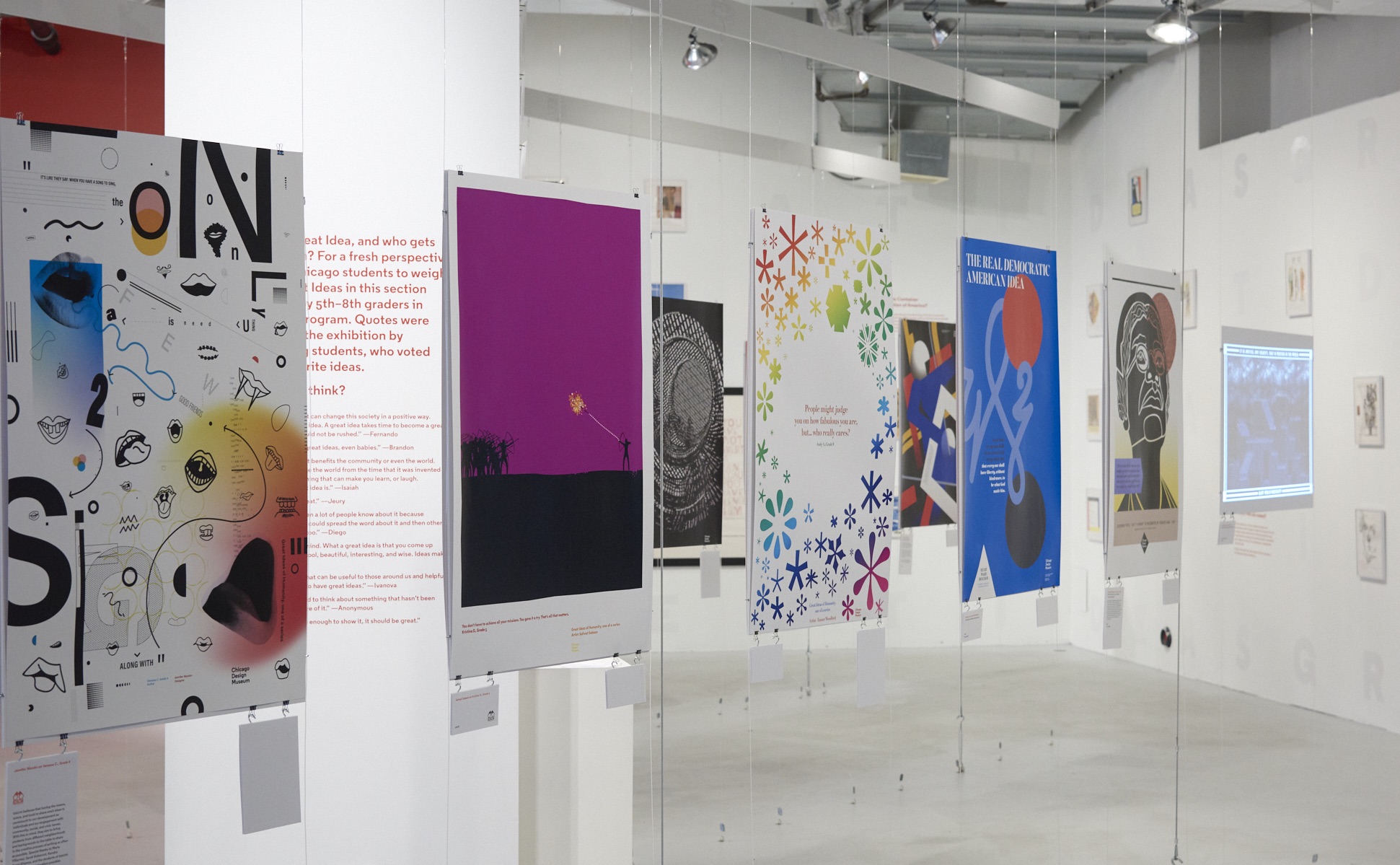 When John Massey, former CCA head of design, encouraged the Chicago Design Museum to reimagine the “Great Ideas of Western Man” campaign, Tanner Woodford, the Design Museum’s founder and executive director, began the reboot of an updated “Great Ideas” series in 2014, but wanted to widen its horizons to reflect a broader range of voices and experiences. Opening and diversifying the scope led to the new title, acknowledging that great ideas could come from sources who were not necessarily men or from the Western world. Substantially more of the ideas here belong to women, and an entire section of the show uses ideas provided by Chicago Public Schools’ students involved in the 826CHI literacy enrichment program, a nonprofit organization dedicated to supporting students from six to eighteen years old with their creative and expository writing skills, and to helping teachers inspire their students to write. It is unclear what kind of lasting impact the original “Great Ideas” series had on American values, but it’s earned a distinguished place in the advertising pantheon. So it’s not surprising that Woodford and the Design Museum staff had no trouble assembling a lot of design talent happy to contribute to this effort.

One of the most salient points about the exhibition is that all the material is digitally represented in an online version of the show (found at www.greatideasofhumanity.com) and although no one is discouraging you from going over to Block 37 and visiting the show, the virtual experience is not markedly inferior to the real one, mostly because of changes in technology. This would be more of an issue if the entries were three-dimensional installations or paintings on canvas or even screened prints, but the majority of the works are computer-generated graphic images printed on 18×24 inch sheets of paper, suspended from the ceiling in an ensemble that makes excellent use of the museum’s exhibition space and combines new works with an informative display with materials from the initial “Great Ideas” series, including some original artwork—a design archive that follows CCA’s merging into the Smurfit-Stone Container Corporation that found its way to the Smithsonian. 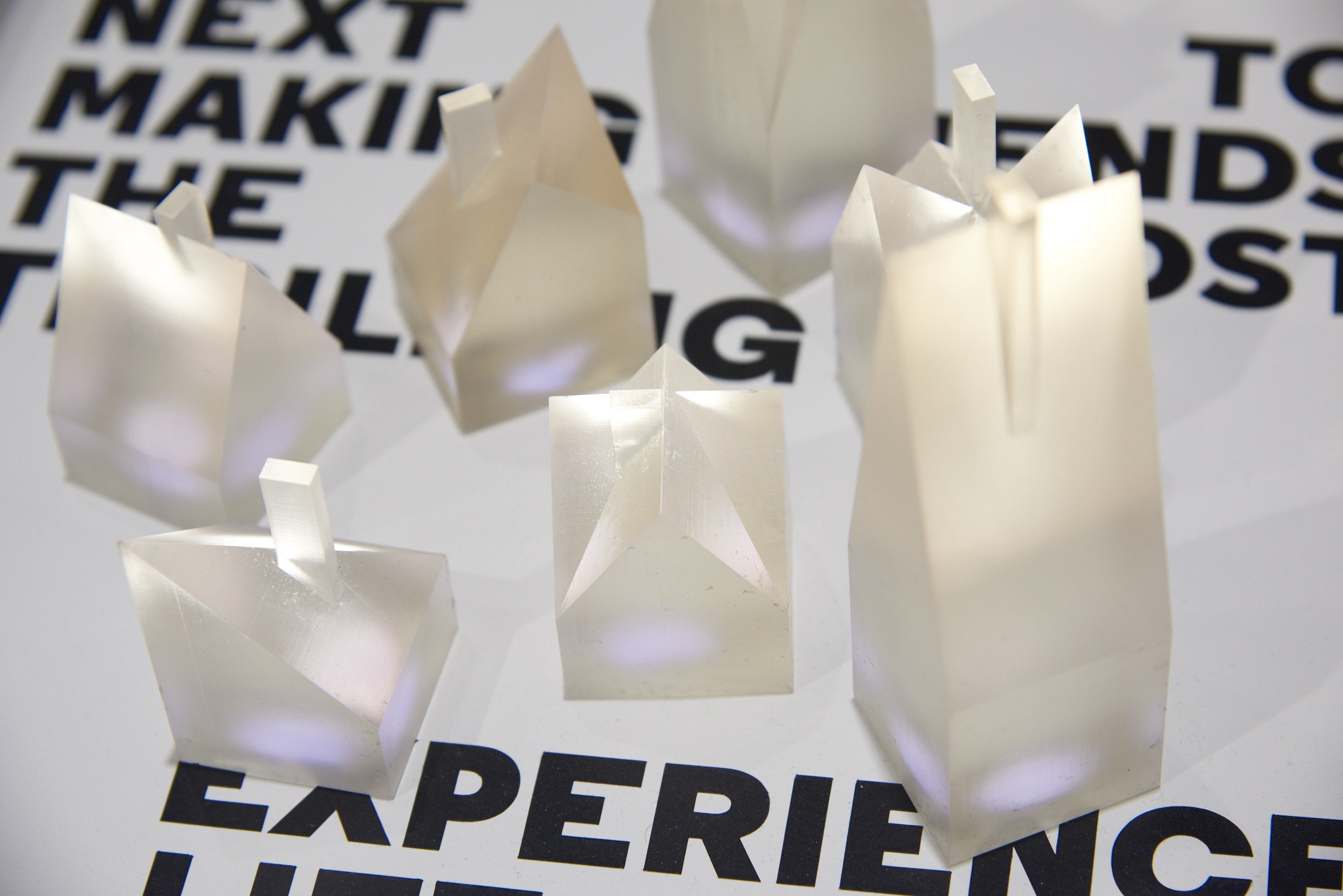 If there’s anything awkward about the show within the museum space, it’s the identifying signage, the so-called “wall cards:” Since there’s no actual wall, most of the cards are attached to the bottom of each piece and most easily viewable by crouching. Those didactic materials—especially the text that provides the idea itself, which is often difficult to decipher in the artistic presentation—would probably be far more accessible if experienced on a desktop or other device.

An intriguing aspect of the exhibition is that it’s easiest to describe it as a show of posters, which provides an interesting forum to discuss what a “poster” is. To some designers, the term refers to something very specific in its format and usage; others apply a much looser interpretation. In this case, the majority of entries are standard 18×24 inch sheets of paper (although some deviate) and in general, they can be described as agitprop—taking a point of view and projecting a position.

An impressive stable of designers offered their contributions to the effort, from the internationally prominent, like Ivan Chermayeff—who reproduced his original entry to the series, the only difference between the two iterations being that he made his original by hand and the current one digitally—and Paula Scher, to newly emerging talent. And while not exclusively focusing on Chicago, it’s the hometown connection that often makes the Design Museum’s mission most compelling. This may or may not explain why many of the more accessible entries are part of the “Chicago Voices” section, featuring work by Chicago artists commenting on Chicago ideas—a special component to the exhibition in conjunction with Art Design Chicago, an initiative of the Terra Foundation for American Art that explores Chicago’s art and design legacy. 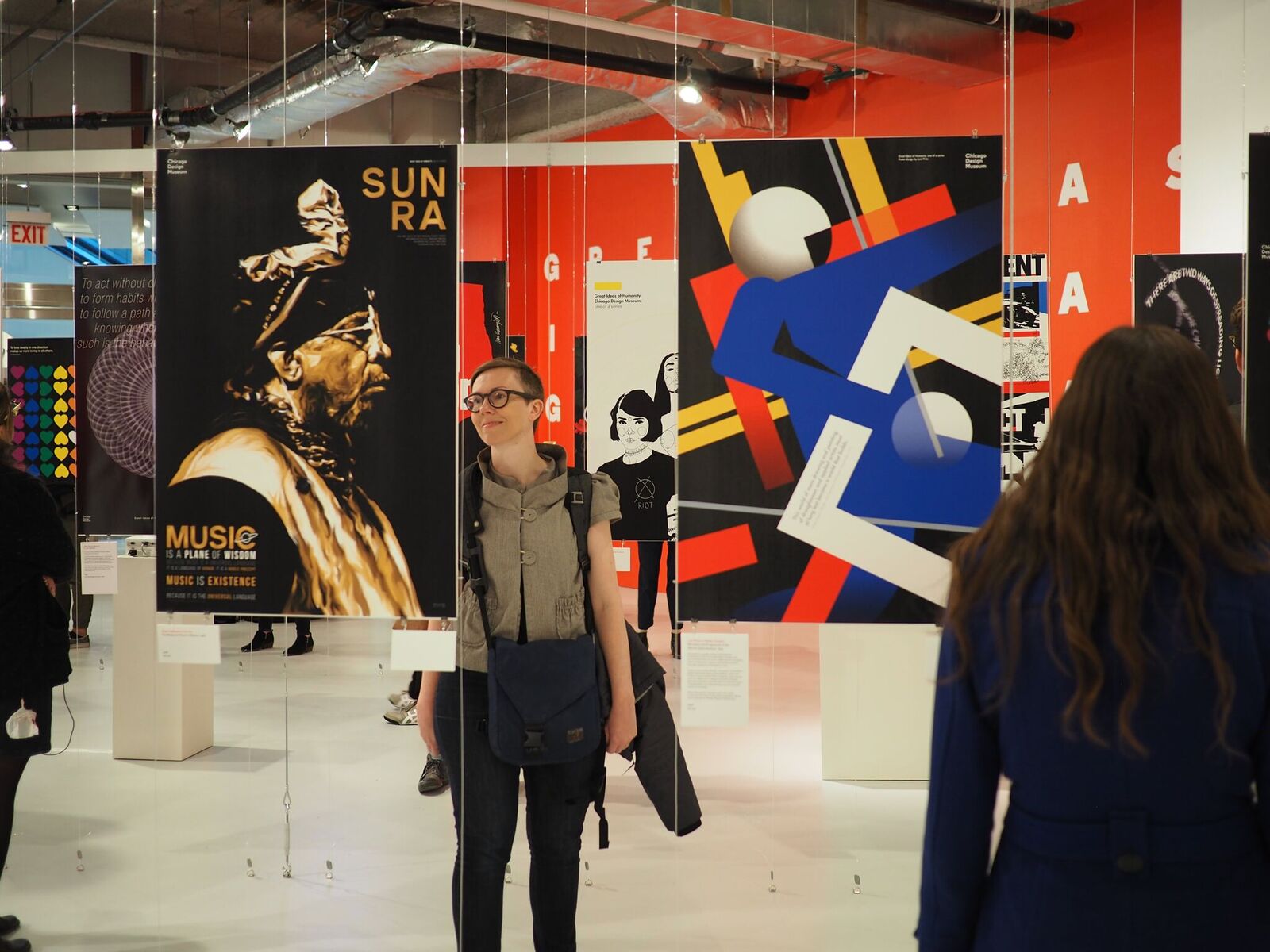 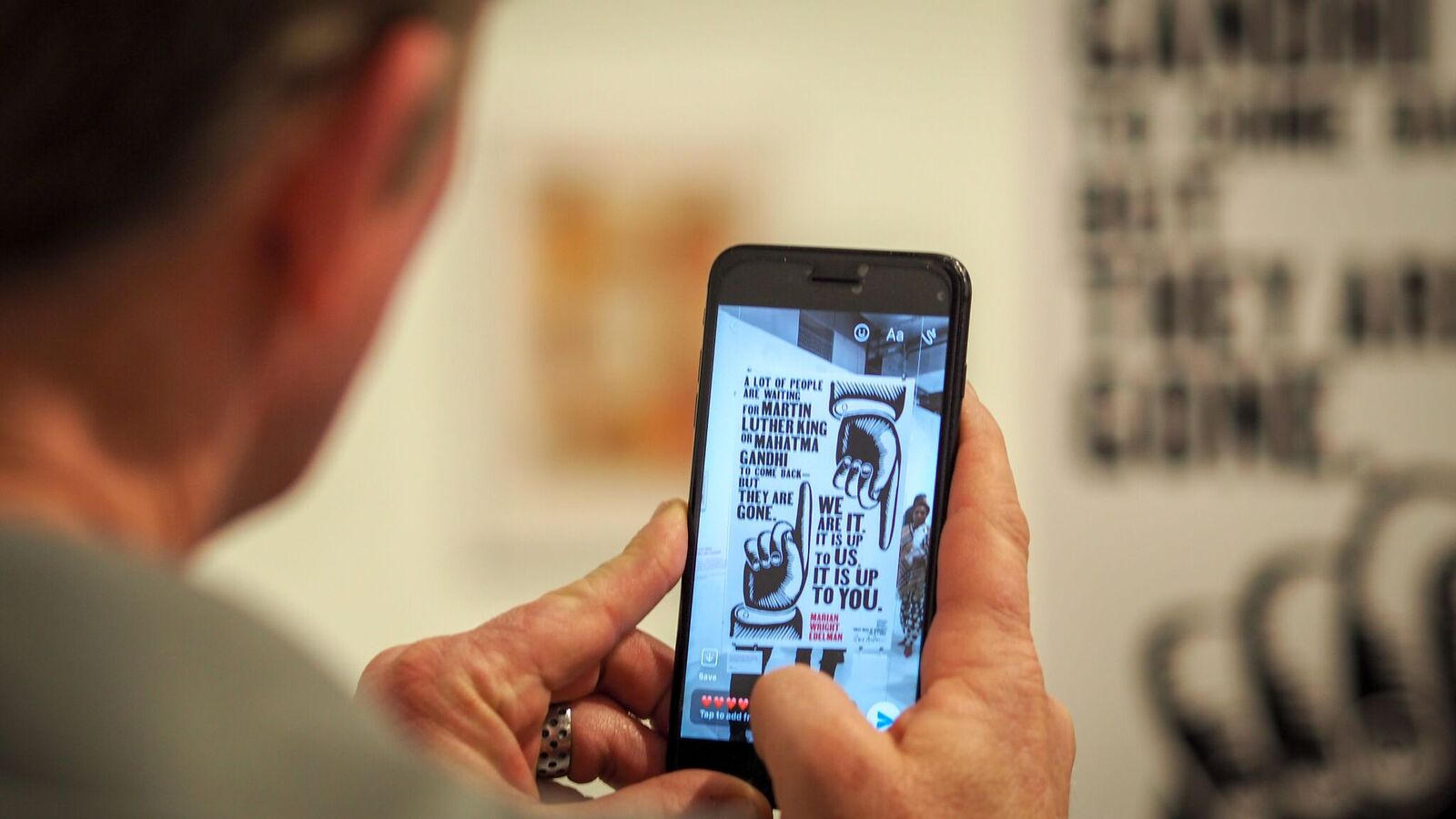 My Chicago-centrism may account for the fact that two of my personal favorites are from the “Chicago Voices” section, and despite the comments about viewing the work on the exhibition website, they really should be viewed IRL: both are three-dimensional pieces, and are from artists trained as architects, for which photography does not convey their impact. Jonathan D. Solomon, director of architecture, interior architecture and designed objects at the School of the Art Institute of Chicago, chose a quote from Harriet Monroe, founder of Poetry Magazine and opted not to make a traditional poster at all but an “object,” an option that the project’s rules permitted.: A group of 3D-printed acrylic objects that resemble large, abstracted Monopoly houses, arranged on a surface bearing Monroe’s suggestion that “next to making friends, the most thrilling experience of life is to make enemies.” Via email, Solomon offered that he intended his piece as “an easily readable metaphor for agonism: or positive, permanent conflict,” adding, “I want to remind people that ongoing conflict, confronting differences, is a necessary part of democratic society.” Carol Ross Barney’s entry channels commentary from a foreign visitor, the painter Fernand Léger, who visited Chicago and presents a “great idea” that is directly connected to the city’s history of architectural innovation. In her piece “Plans, 1932; ‘Chicago Seen through the Eyes of a Visiting French Cubist,’” she suspends an outlined Plexiglas map of the city to suggest the role the city’s suspended bridges have played in its development.

The exhibit offers a tremendous amount to digest. Some entries are instantly comprehensible as one-liners; many others offer more complex, nuanced presentations. Still others are so impenetrable as to defy interpretation, which is why a visit in real life merits further contemplation and pondering, both online and off. Great ideas are timeless, but they take time to absorb.

“Great Ideas of Humanity: Out of the Container” at the Chicago Design Museum, Block Thirty Seven, 108 North State, Third floor. Through August 18, free and open to the public. 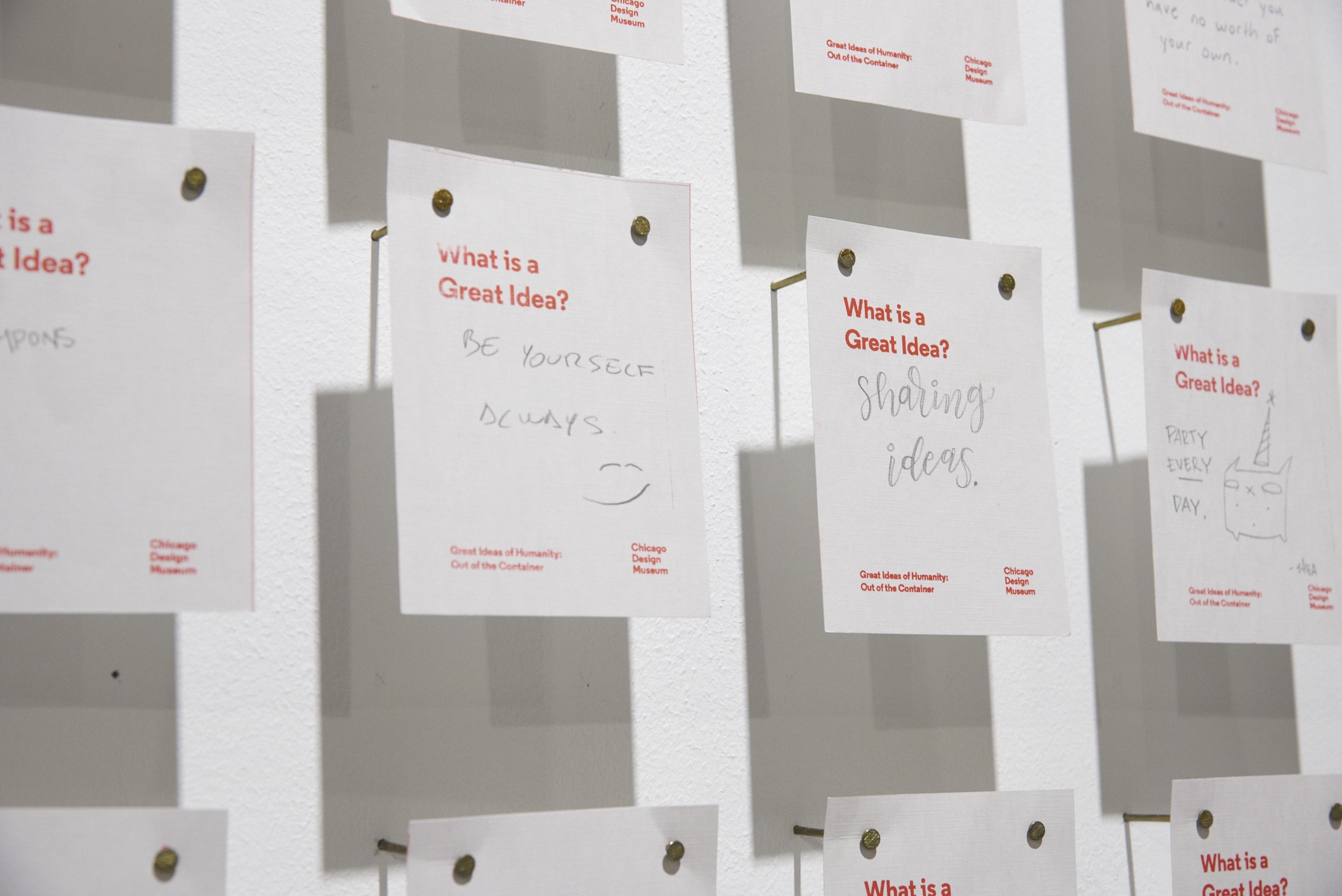