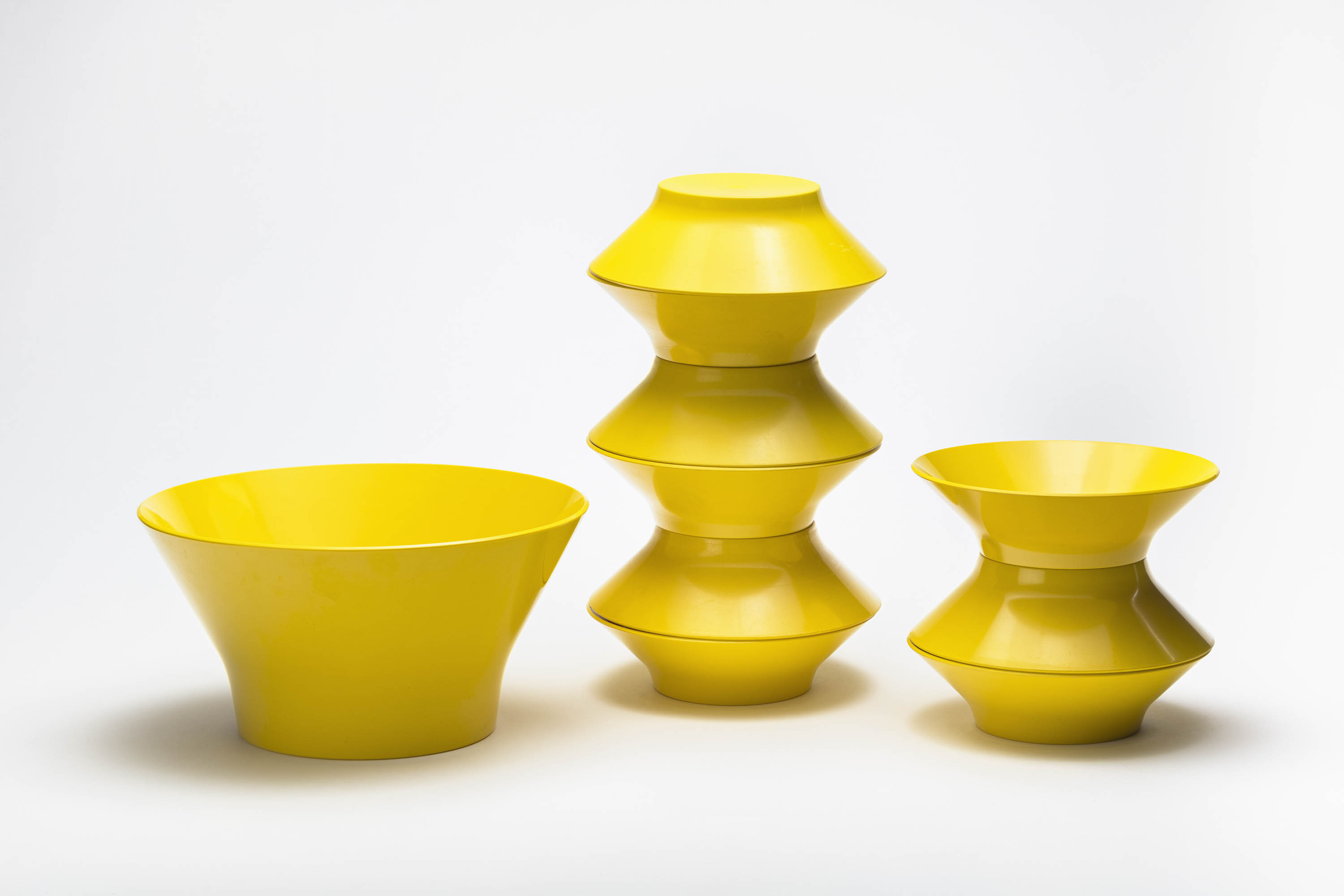 Given the fervid popularity of mid-twentieth century architecture and design—and the astonishing collector market in furniture and accessories it has spawned—it’s difficult to believe that there actually was a period when the style was considered passé. “Whatever happened to Danish Modern?” the esteemed critic Ada Louise Huxtable asked in the New York Times in December 1980. “Where has all the furniture gone that was such a tidal wave of good taste and good design in the 1950s?” Clearly that time of disfavor was brief. Just peruse leading online marketplace 1stdibs.com or the catalogs for the Wright or LA Modern auction houses or even your local Craigslist postings: Few acronyms produce the kind of results that MCM does. Prevailing taste today vividly embodies Huxtable’s assertion in the same article that “the best Danish modern is beyond style in its unassertive timelessness,” which is at the core of the message in Georg Jensen: Scandinavian Design for Living, through September 9 at the Art Institute.

The exhibit tells a compelling story of the influence the Jensen company exerted on the Scandinavian aesthetic from the early twentieth century and especially its central role in shaping the overall course of post-World War II contemporary design. Other European design talent—and even some Americans—played significant roles, but much of what we think of today as “Mid-Century Modern” has its roots in Denmark. The show (or really, the essays in the accompanying catalog) makes the argument that it was in large part Jensen’s retail presence in the high-end tabletop market that popularized what came to be known as “Danish Modern,” as an alternative contemporary expression of the more hard-edged, techno-industrial International style of the Bauhaus and beyond. Special events and exhibits in its U.S. stores exposed Scandinavian design of all types—furniture, textiles and other accessories —to American audiences for the first time. 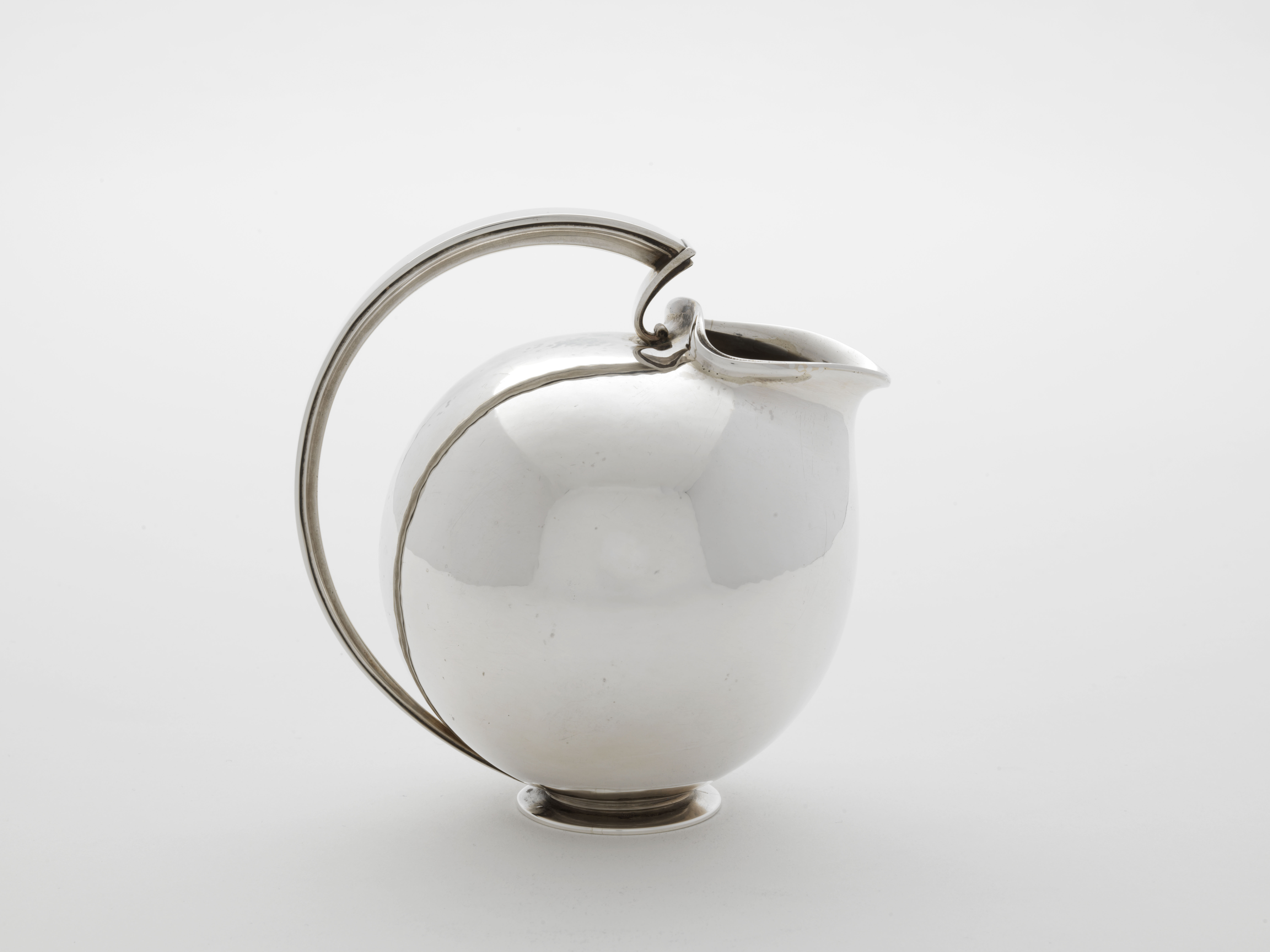 The catalog essays, by AIC curator of architecture and design Alison Fisher, and by art historians Maggie Taft and Thomas C. Thulstrup, offer a wealth of detail about the Georg Jensen company, which its eponymous founder established as a jewelry workshop in 1914 but eventually expanded to include offerings of silver flatware and holloware, and later a wide range of housewares. The materials focus on how the company and its designers (there were many, including Jensen himself, who died in 1934) channeled craftsman traditions into a sleekly streamlined aesthetic and disseminated it worldwide. But we also glean fascinating details: That the overall predilection for teak furniture and accessories stemmed from Denmark’s longstanding trade relationship with Thailand, and that Finn Juhl, who designed many of Jensen’s retail stores, enjoyed great acclaim from consumers for his furniture, was scorned by his design peers who thought his work was too sculptural (he was apparently obsessed with British sculptors Barbara Hepworth and Henry Moore) and not sufficiently functional.

While the exhibit offers spectacular examples of the silversmithing arts, it’s hard to display silver pieces in a manner that doesn’t present them as unattainable objects in an airless environment. Maybe it’s the nature of silver or the choice of gray flannel paint for the walls of the Rice Wing galleries or the simple stillness of shiny objects in glass cases, but there’s something inert and airless about the exhibition overall. There is nothing soft or inviting about anything in the show, which may well speak to the lack of warmth in modern design—even in its Danish Modern iteration. 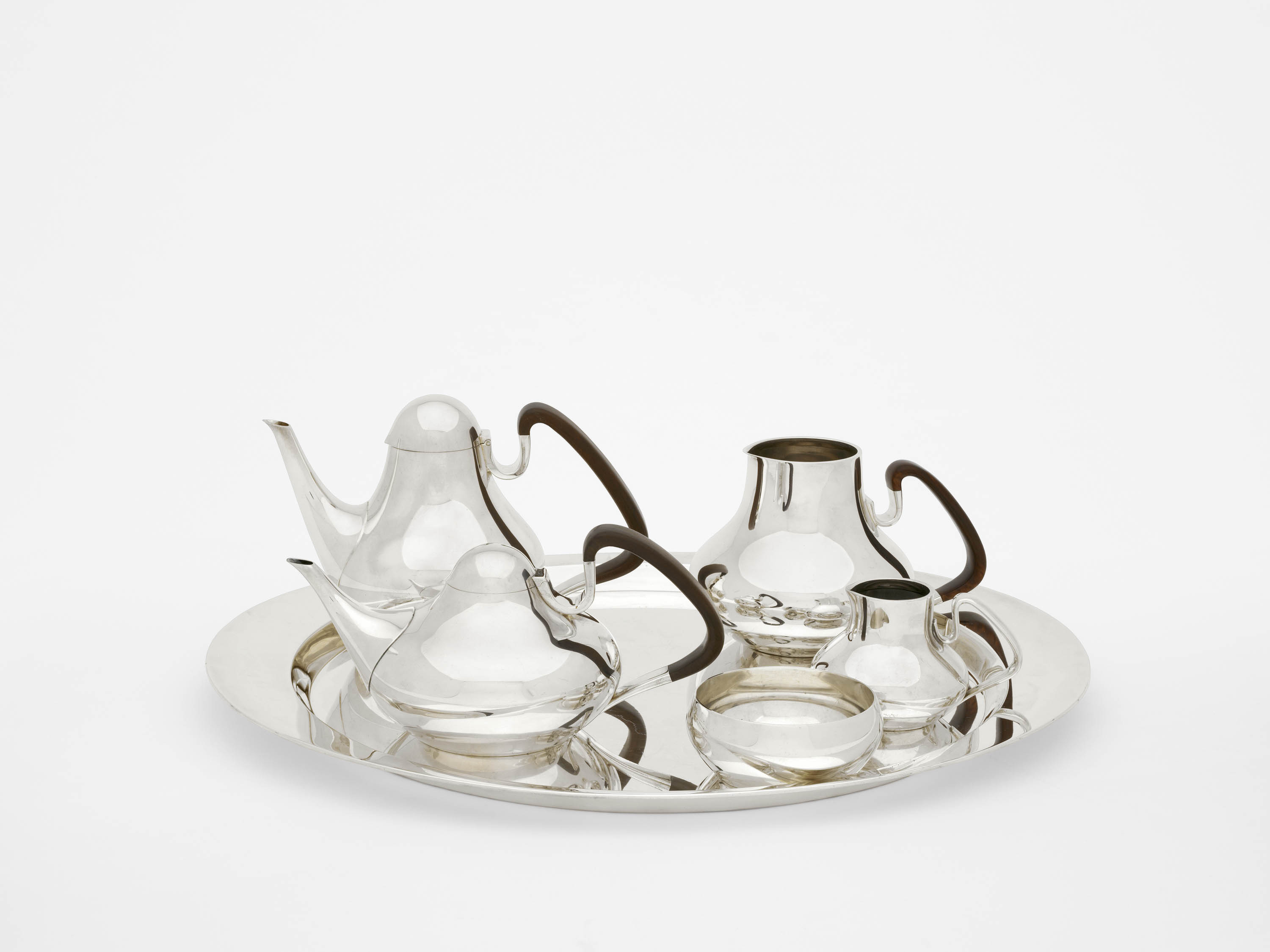 One of the toughest things about exhibiting utilitarian objects is the inability to gauge their utility. When you go to a store to look at tabletop items, you want to pick them up and experience how they feel. Obviously this flies in the face of everything a museum is about, so there’s a built-in level of frustration in viewing a show of this type. But at the same time there are certain objects in the show—Allan Scharff’s Ibis pitcher or Henning Koppel’s covered fish platter—that are such exquisite forms you can hardly even conceive of using them for their avowed purposes.

Intriguingly, two people I spoke to at the show—both, perhaps not coincidentally, women of a certain age— each expressed disappointment that the show didn’t display any jewelry. There are probably two reasons for this: the Bard Graduate Center mounted a large, well-received show of Jensen jewelry in 2015. But also, this show is about the house’s influence on popularizing the modern design aesthetic—with an emphasis on functionalism and simple utility; jewelry by its very nature, is largely non-utilitarian. It’s unclear whether this was a curatorial choice or an oversight, but it certainly jibes with the show’s emphasis on domestic lifestyle rather than fashion or fine art.

It’s no coincidence that the lead patrons of the show are Carole and Gordon Segal, the founders of Crate & Barrel, and not simply because they have an extensive collection of vintage Jensen items. Probably more than any (retailer) in America, Crate & Barrel was responsible for the mainstreaming of Scandinavian design sensibilities across the spectrum of home furnishings.

And while there is a passing reference to the store (and a great picture of the original Wells Street store facade) in the catalog, the curator’s essay doesn’t connect those dots. While you understand she’s overcompensating to avoid the appearance of patronization, it would be fully justified. After its expansion beyond Chicago in the late 1970s, Crate & Barrel came to exemplify accessible good taste with increasingly sophisticated consumers. While the goods it sold may have come from all over the world, its brand—marrying minimalism with warmth and comfort—is directly descended from “Danish modern.” So for their contribution not simply to making this exhibition happen, but for the company’s role in supporting good taste in America, they deserve to be patronized. 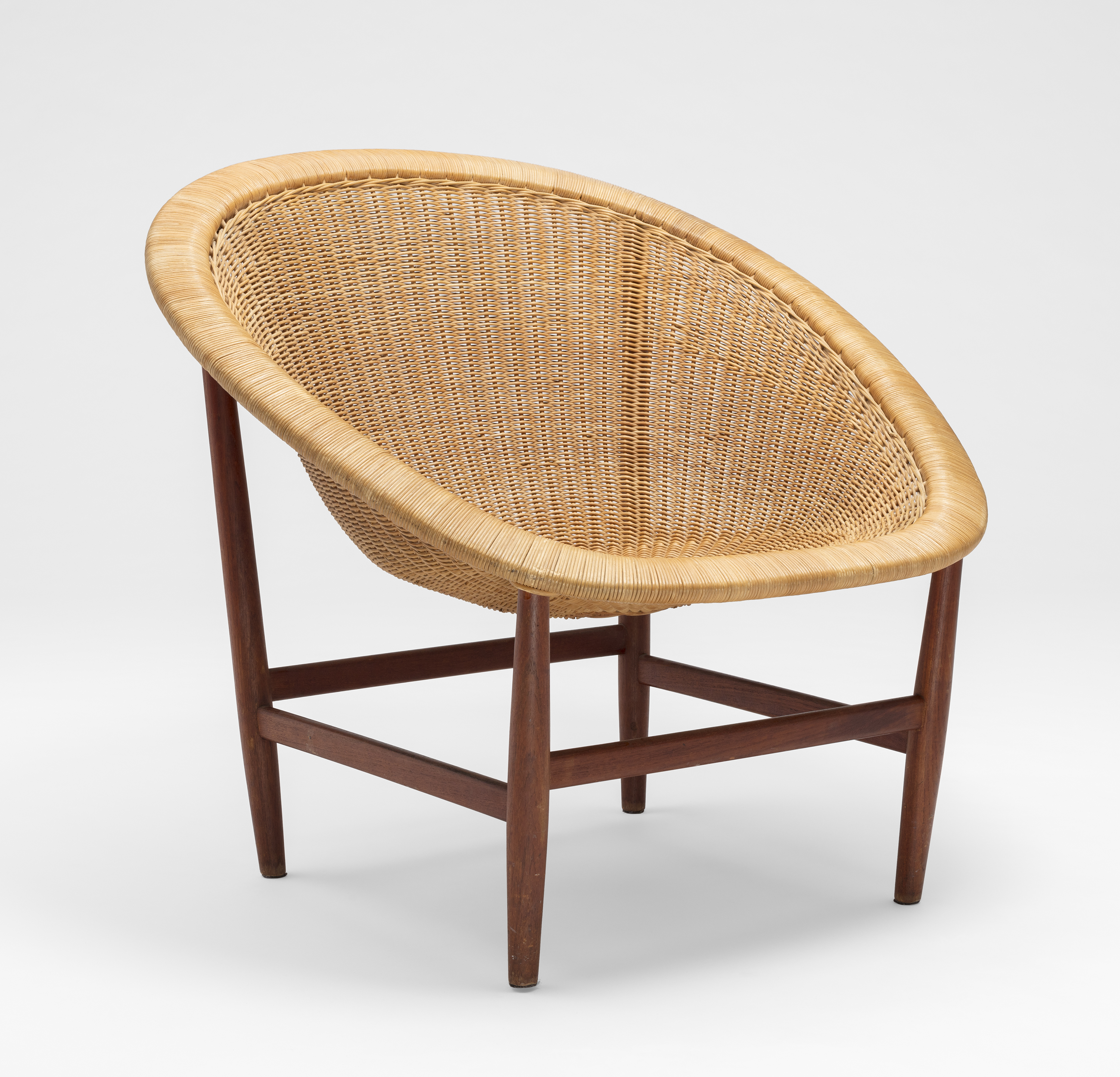