It’s early afternoon on a Thursday. The sky has become clear after hours of pouring rain that made the drive to the western Chicago suburb extremely bothersome—the switches between insane heat and heavy downpour have that effect this time of year. Despite high levels of humidity, a small crowd is gathered at the Elmhurst Art Museum’s patio for their biggest event in years—namely, nearly twenty-five: Mies van der Rohe’s McCormick House open house.

Considering the highly anticipated occasion of restorations to its original façade that would reveal the building’s full exterior for the first time in such a long time, the crowd patiently awaits the ribbon-cutting ceremony—a few quiet hellos and air kisses with eyes staring at the house’s closed door. It’s been several hours since the storm passed but the air still feels thick, accompanying the distinctive scent of soggy soil after a rain shower and bringing to attention the re-landscaping of the historic house’s front yard, carefully designed to reclaim much of its original feel. The eye rests in the green space—trees, plants, flowers and grass surrounding the museum space, concealing the parking lot, give a secluded feel, almost reminiscent of a day in the countryside. 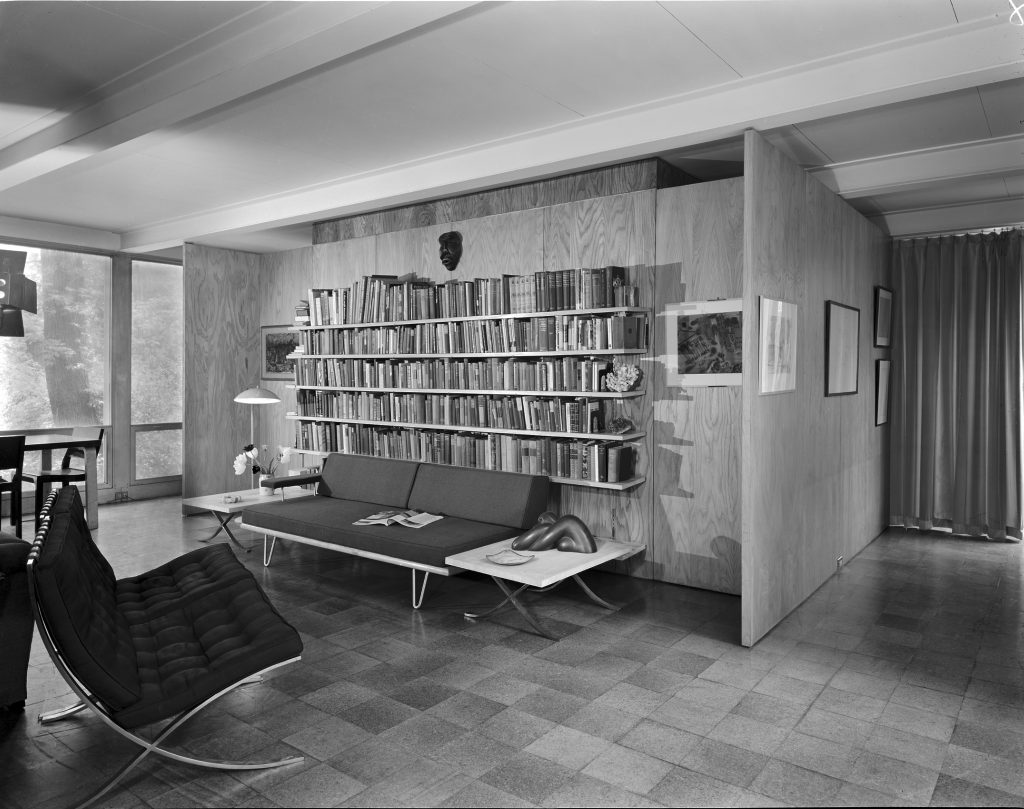 The one-story McCormick House sits peacefully, completing the picture—a sanctuary of sorts. Red ribbon draws a gentle line between the house and the visitors—a physical barrier: we look at art; we do not touch it. At least not yet. Composed of glass and steel, and set upon a concrete slab foundation, the McCormick House is one of only three single-family homes in the United States designed by famed architect and leading twentieth-century modernist Ludwig Mies van der Rohe. A very rare example of him working on a smaller, residential scale, among his more elaborate, best-known projects—the Chicago Federal Center, Crown Hall at the Illinois Institute of Technology, Manhattan’s Seagram Building and high-rises along the Chicago lakefront, including the historic 860-880 Lake Shore Drive—this one was built for American property manager and developer Robert McCormick Jr. and his wife, poet Isabella Gardner.

More than a prestigious suburban residence for the McCormick family the property was to serve as a prototype for prefabricated middle-class homes—a real-estate project for the future that Mies envisioned and one that McCormick Jr. himself was planning to develop. It was completed in 1952. After years of social gatherings of Chicago’s most prominent families, socialites, artists, architects, and writers alike, including figures such as Mies van der Rohe, Marcel Breuer, T. S. Eliot, Robert Frost, Karl Shapiro and others that Gardner met as associate editor of Poetry magazine, the house was sold by its last occupants, mayor of Elmhurst from 1973 to 1977, Ray Fick and his and Mary Ann Fick, to the Elmhurst Fine Arts and Civic Center Foundation, in 1991, making it the museum’s most prized possession. 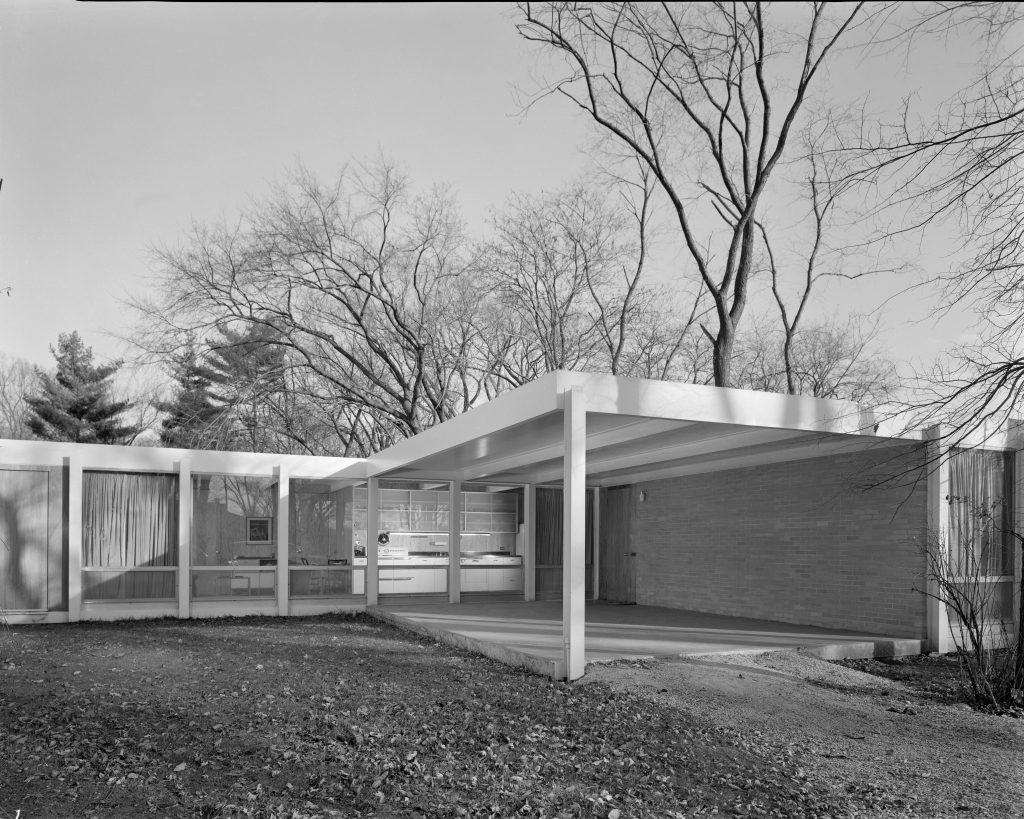 It wasn’t long until it was moved from its original location and attached to the Elmhurst Art Museum via a fifteen-foot-long corridor three years later—a project that won a 1998 design excellence award from the Chicago chapter of the American Institute of Architects. But over the years two major issues arose: first, as the house was mainly used for administrative offices, parts of it were inaccessible to anyone without official museum business. Second, as the house was seamlessly connected with the museum building, it was often overlooked to the point of making visitors wonder where the house was, even when they were standing right inside of it.

This was what the museum tried to rectify by bringing the McCormick House back to its original mid-century appearance. Which, in this case, meant tearing down the corridor between the two buildings and restoring the carport at the house’s entrance. “One of the biggest challenges was helping people visualize what the building would look like after the separation,” says John McKinnon, the museum’s executive director, as the ten-week restoration work has just ended. “As a standalone building, one can better appreciate the original design of the McCormick House, which is the cornerstone of the museum’s permanent collection.”

Eager to explore the architect’s important relationship with the city, McKinnon says, “Chicago is filled with buildings by Mies but many are not public, whether private apartments or federal buildings. The suburban residence of the McCormick House provides a differently sized structure and living conditions set by the architect. It is also a mass reproduction model, which many have not associated with Mies in the past. Providing access and interpretation to this home will provide a more complex view of the famous architect because it is not one of his known masterpieces.”

But that’s just the beginning of a multi-phase restoration project that also includes the “Mies’s McCormick House Revealed: New Views” exhibition, organized by Barry Bergdoll, architecture and design curator at the Museum of Modern Art in New York and Columbia University professor. Spanning three galleries and years of Mies’ design philosophy and innovation from the 1950s onwards, it includes historical drawings and artifacts (gallery one), a traveling show curated by Renato Anelli of the University of São Paulo, that provides a deeper look into glass houses across the world (gallery two), and a group exhibition of contemporary photographic works that explore Mies’ use of glass as a material and as a concept. “The in-depth exhibition provides historical information, context and new information about the McCormick House, from Mies’ prefab proposals to its relationship to other glass structures and responses by contemporary photographers to his famous curtain walls,” McKinnon says.

As for Bergdoll, “I have studied Mies van der Rohe’s career for many years, ever since the late 1990s,” he says, “but his relationship to pre-fabrication in the great experimental decade that followed the Second World War in the United States was unknown to me. It was a short-lived episode but one that is fascinating in shedding new light on Mies’ relationship to housing,” he adds. “The McCormick House indeed deserves to be put into a group of experiments that includes one of Mies’ most successful projects, Lafayette Park in Detroit, as a design with great potential for the development of housing types even in the future, even if the material and aesthetic choices would no doubt be different. Mies was interested in creating flexible prototypes, a system, a language of architecture and not simply one-off designs,” he says.

“The McCormick House is at once modest in scale and yet ambitious in its aesthetic goals,” Bergdoll adds. “The commitment of the museum to have the house live again as a very significant piece of American architecture and as a site for creativity by contemporary artists opens a whole new chapter in the life of this building.” He’s right. 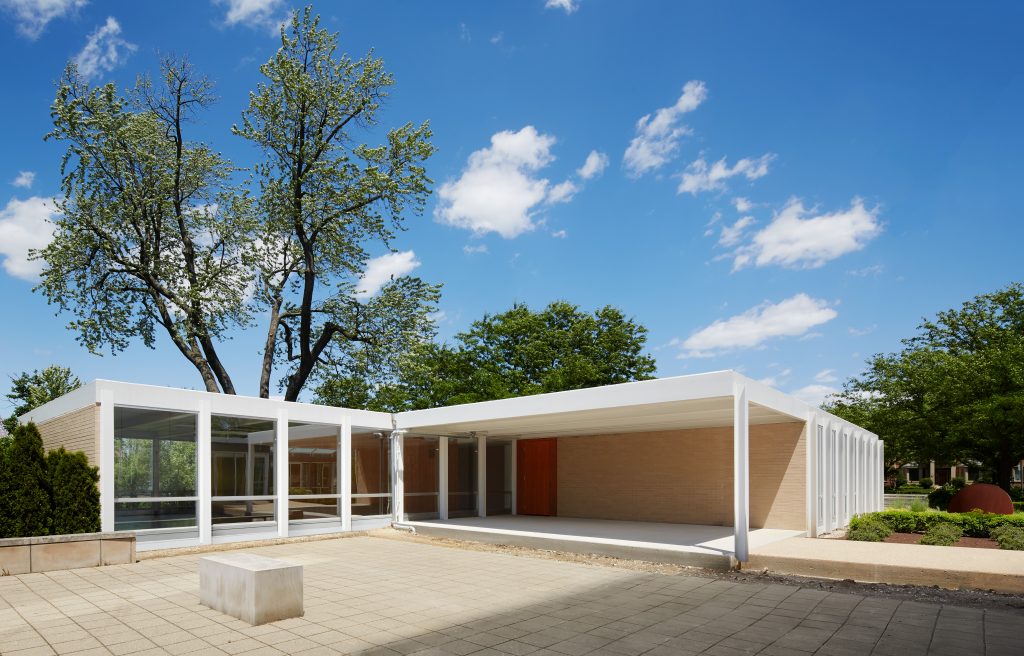 Back to the newly renovated McCormick House’s front yard, numerous gold-plated scissors are passed around on a tray as a group of people crucial to the realization of the project are called out by name: the ceremony begins and at once the red ribbon turns into fat confetti that spins in the wind as it falls to the freshly watered ground enhancing the earthly smell. The door opens. And it all becomes red.

As the crowd curiously steps in, the eye gets used to the red glare the same way it adjusts to low lighting. Iñigo Manglano-Ovalle’s architectural installation is in full swing. In “Untitled Film (Red),” the multi-disciplinary conceptual artist has a bold vision for the newly renovated McCormick House—one that builds on the idea of the original developers (Robert Hall McCormick and Herbert S. Greenwald) to make glass windows of “almost any shade of the rainbow.” The Spanish-born, Chicago-based artist has colored film placed over every single floor-to-ceiling window breathing new life into the famous house—after all it hasn’t been lived in for decades. 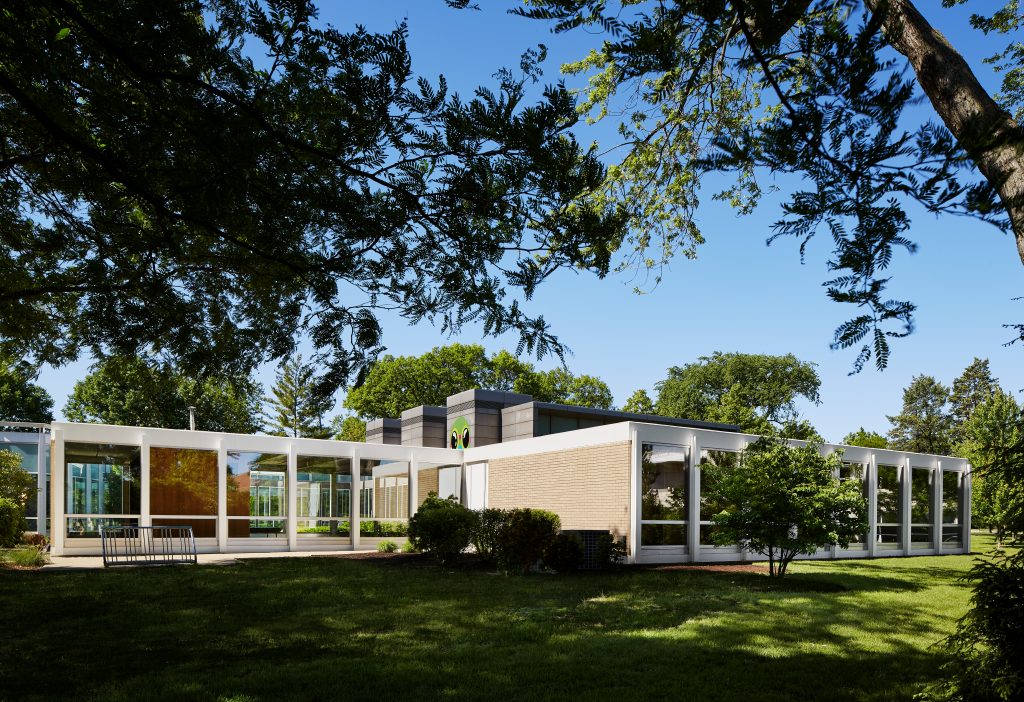 Manglano-Ovalle is no stranger to Mies’ legacy. Over the past two decades his wide body of work between the social, the political and the cultural, spans a variety of media: sculpture, video, installation. It includes projects at Mies’ Farnsworth House, Barcelona Pavilion, S.R. Crown Hall at the Illinois Institute of Technology (IIT), and Neue Nationalgalerie, Berlin, as well as a project based upon the architect’s uncompleted project, the House with Four Columns (1951). “An intervention such as this one is more tactical than aesthetic since it seeks to create a situation and generate an experience,” Manglano-Ovalle says. “It is also, strictly speaking, an intervention on a historical subject so all parameters must be considered, including the performative aspect of the public,” he adds. “The work is titled ‘Untitled Film (Red),’ as such it claims to be a film, a sequence of events that reveal themselves by virtue of light and color, so it is a film but it is also a work of celluloid and color on architecture, a red film or a film in red. In this work light and color are not so much something to see, as something to experience, to be enveloped in. Red permeates the whole of the environment, including ourselves and the our view of the exterior. Red, a color with optical, emotive, psychological, social, as well as political connotations, its meaning filtered not by the hue but by individual as well as cultural assignations or responses to red.” 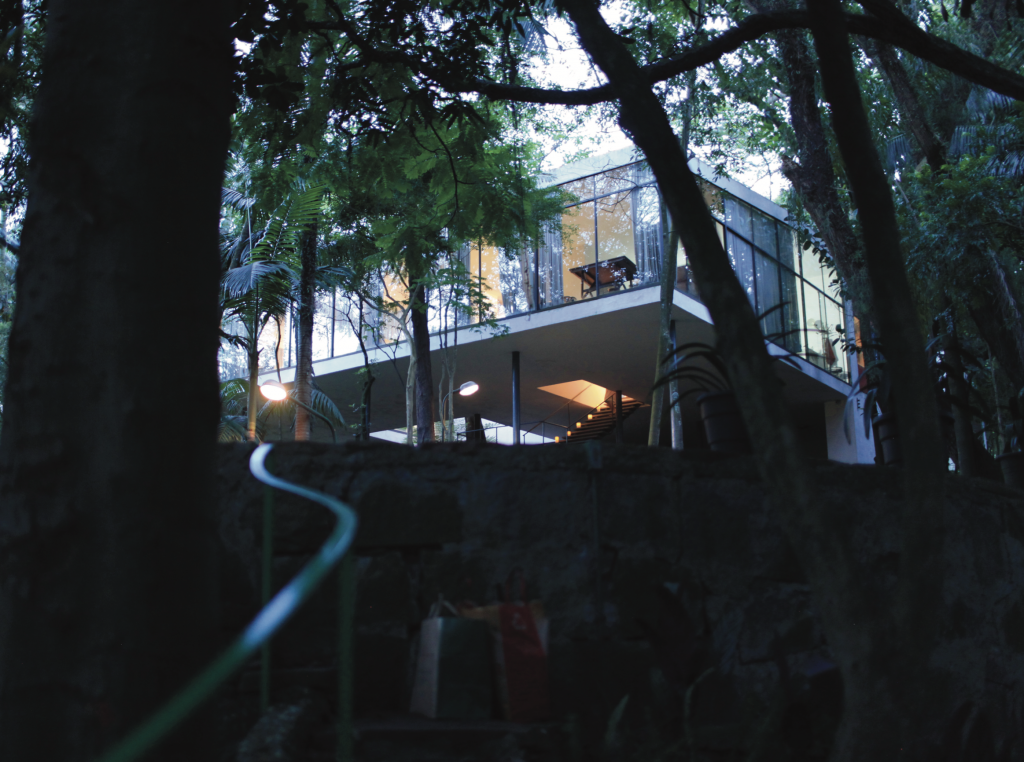 McKinnon agrees. “I think this exhibition may provide a more literal point/counterpoint of past and present than the three-part show and I will elaborate a bit further: There is an interesting past-contemporary relationship made more apparent with our new restorations—and made quite strikingly with ‘Untitled Film (Red),’” he says. “As people walk across the restored carport and doorway, they can see the newly unveiled work we have done to bring the building back to a 1952 state. Walking across the threshold of the doorway, they then encounter Manglano-Ovalle’s architectural intervention—giving audiences something new to see outside and in. The red film he adhered to the windows provides a stunning immersive experience.”

Between the old and the new, whether an ode to Modernism and to Mies’ legacy, an opportunity to ignite relevant conversations about building and housing today to educate and inspire future generations or simply a renovation long overdue, the Elmhurst Art Museum’s trifold exhibition is best captured in McKinnon’s words: “There isn’t just one story to tell about the McCormick House, rather there are many.”