The Alphawood Foundation, like its benefactor Fred Eychaner, has assiduously maintained a low, almost invisible profile. But Wrightwood 659, with its dazzling new exhibition venue, will threaten its near-anonymity. Flying under the radar is not, of course, an unusual strategy for a grant-making institution. But the building is such a remarkable architectural achievement that it, alone, should assure an elevation of the organization’s place in the arts community. And if its inaugural exhibits are an example of offerings to come, its role as a leading light in the visual arts environment should be locked in.


For the building’s designer, Tadao Ando, it’s another triumph in a distinguished (if limited) American portfolio. Ando, possibly Japan’s most important living architect, has an important connection to the city of Chicago: His first U.S. project, in 1992, was his design for the Art Institute of Chicago’s Asian art gallery. Additionally, his first freestanding building in the United States, also designed in 1992, was a concrete, steel and glass house for Eychaner that was completed in 1997 and resembles an impenetrable loading dock from the Wrightwood Avenue side, but from behind its blank facade hides a dynamic interior featuring walls of glass, wrapped around a central reflecting pool.

Ando, who originally planned to become a prizefighter, never attended architecture school. Some accounts describe him as self-taught, but it’s unclear how he ever obtained the credentials necessary to obtain a license to practice. Still, his remarkable output of consistently brilliant, minimal designs has brought him acclaim, adulation, and the Pritzker Prize—the profession’s highest honor—in 2005.

In conjunction with the inaugural exhibits at Wrightwood 659, Ando came to Chicago and offered an overflow crowd at the Art Institute his musings on his work, insights into his personal life and an astonishingly upbeat perspective on the world. It’s astonishing because, as he revealed in his comments, he has survived bouts of cancer over the past decade-and-a-half, and lacks many of his internal organs. He maintains a positive outlook and radiates confidence in the possibility of living to be one hundred, encouraging everyone in the audience to set that as a goal. While Ando is clearly outgoing, gregarious and funny, his talk was made by his translator, a Canadian named Yuko Yasutake—an infectiously charming giggler—whose reactions to Ando’s observations were as engaging as the reflections, adding extra flavor to the already-engaging commentary.

The secretive nature of Alphawood Foundation—which according to information on its website supports primarily progressive causes—is an apt metaphor for its most recent accomplishment. The gallery is hidden away behind what amounts to a mere facade.

Although Ando is, from most viewpoints, the quintessential modern minimalist, Wrightwood 659 also reflects his approach as architectural preservationist, which comports with one of the Alphawood Foundation’s primary stated missions of supporting architectural preservation activities. (It was a major donor to the recent restoration of Wright’s Unity Temple in Oak Park.) While he is most known for spare, imposing and often abstract concrete masses, many of Ando’s most interesting projects of recent vintage feature discrete, functioning structures dropped within existing, often historic shells.

Wrightwood 659 is a fine exemplar of this building type. Like all of Ando’s work, there is nothing big and splashy here. It’s quiet, still and meditative. Instead of demolishing the existing building that was on the site—an unremarkable four-story apartment building built in the mid-1920s—he retained its exterior red-brick envelope and built his minimalist structure inside. It’s a singular construct placed cleverly and seamlessly inside a shell of another, and thus emblematic of the Alphawood Foundation’s stealthy impact on the cultural scene. In his AIC talk, Ando explained that upon viewing the existing building, he was enormously impressed with the quality of the brickwork—acknowledging the skill of local tradespeople during the boom era when it was built. If the original masonry was so impressive, it’s unclear why (according to the press materials) the interior brick walls were dismantled, the bricks reconditioned, and reassembled. Whatever the reason for the process, their impact in the soaring three-story space at the front of the building is spectacularly raw and dramatic. Indeed, it’s the materials in the project—the polished concrete walls so smooth they beg to be touched, a stone floor that sparkles in the light, the unembellished oak benches—that equal the space planning for astonishing impact. They are rich, textured and powerful in their simplicity.

To fully appreciate Wrightwood 659, you have to consider its context, both conceptually and locationally, which necessarily includes its next-door neighbor—the house Ando designed for Eychaner twenty-six years ago. Long a curiosity in the neighborhood and among architecture aficionados worldwide, it’s unclear whether Eychaner did or does actually live there, but it has reportedly served as a frequent venue for high-end political fundraisers. Eychaner is among the most prolific Democratic Party donors in the country, and reportedly the top donor in Illinois. One of the most significant aspects of the Wrightwood 659 design is its western wall of glass on the top floor that permits a tantalizing glimpse into the remarkable house next door and its serene, lush atmosphere that  the passerby would never envision beyond its concrete bunker facade.

It makes you understand how important it was for the compulsively private Eychaner to control not simply physical access, but visual access to the house. Some time after building it, Eychaner appears to have acquired the buildings to the east and to the west. The building to the east—a three-story apartment building, completely undistinguished in style—has been repurposed as Wrightwood 659. Eychaner even purchased the property on Deming Place that was across the alley, directly to the south of 667, and razed the house there. The property remains undeveloped.

When you visit the Wrightwood 659 space for the first time you should be warned that you may be so absorbed by the surroundings that it will be hard to focus on the artwork.  I was sufficiently distracted by the architecture that I had to go back a second time to look at the exhibits, of which there are actually two: A sprawling, expressionistic display of some of Ando’s greatest hits, and a compact but rich retrospective of the work of Le Corbusier, who Ando has always acknowledged as one of his heroes. It’s easy to understand why.

What’s great about the two inaugural exhibits in conjunction is how they suggest the wide range of approaches to exhibiting architecture. The Le Corbusier show is a splendid example of “conventional” architecture exhibitions featuring outstanding scholarship, brilliantly sourced pieces and informative didactic materials. The Ando exhibit is looser, more freeform, visually explorational and innovative, with explanatory material as minimal as the architecture itself. 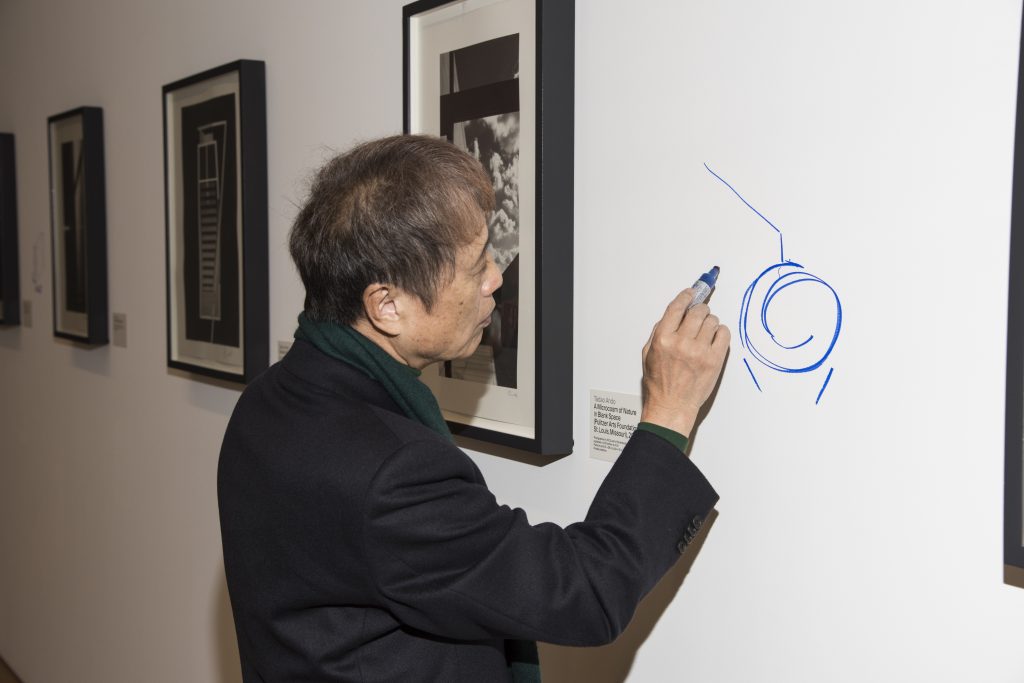 The Le Corbusier show, curated by Eric Mumford, who teaches at Washington University’s Sam Fox school of architecture, offers a straightforward look at the enormity of the Swiss-born architect’s spectacular achievements, succinctly suggesting why we consider Le Corbusier (born Charles-Édouard Jeanneret), along with his contemporaries Mies van der Rohe and Walter Gropius, more or less the inventors of what we consider modern architecture.

The comprehensive nature and illuminating quality of the explanatory materials in the show suggest that the accompanying catalog will make a major contribution to the body of Le Corbusier scholarship. But the real reason to visit the show is the abundance of primary materials on loan from Le Fondation Corbusier. We expect great drawings and period photographs in a show of this kind. But here there are exciting surprises. First, a series of astonishing models created, essentially as sales tools at the time the projects were designed—one of Le Corbusier’s masterpieces, the Notre Dame du Haut chapel at Ronchamp, and another of the government site at Chandigarh, India, carved out of a rich strain of mahogany-like wood. Another wonderful item is a drawing on loan from the Art Institute that Le Corbusier created spontaneously in 1935 on the occasion of a visit to Chicago during an address he made on his idea of the Radiant City (Ville radieuse). And there’s a fascinating display of tiny, scale models of Le Corbusier’s oeuvre, created as class projects by Ando’s architecture students.

The Ando exhibition, curated by Illinois Institute of Technology (IIT) Architectural History Ph.D., Dan Whittaker, takes a markedly different approach—speaking to the visitor in almost purely visual terms, with little elaborative text. It features an installation representing the monumental “art island” created for the Japanese media mogul Soichiro Fukutake, including a site model and video loops. This creates an enveloping, immersive experience, and there’s an exquisite model of his “Church of Light”—a design that is conceptually nothing more than a concrete box pierced by a simple cross of light. The visuals are meant to speak for themselves.

Sketches drawn directly on the walls in blue marker accompany some of the Ando items. They are unexplained, although if you examine them you realize they are meant to offer additional views of the buildings shown primarily in scale models. I would have had little idea what they were if I hadn’t read Blair Kamin’s story about the show and seen the photo he posted on Twitter. It doesn’t matter. Although a little interpretation wouldn’t hurt, the intensity of the images and the experiences—the sweeping models and the use of video—are sufficient to convey the reflective, zen-like power of Ando’s aesthetic.

Although there are rumblings that the shows will travel to other sites, it’s hard to imagine a better place than Wrightwood 659 to appreciate the work of these two master designers.