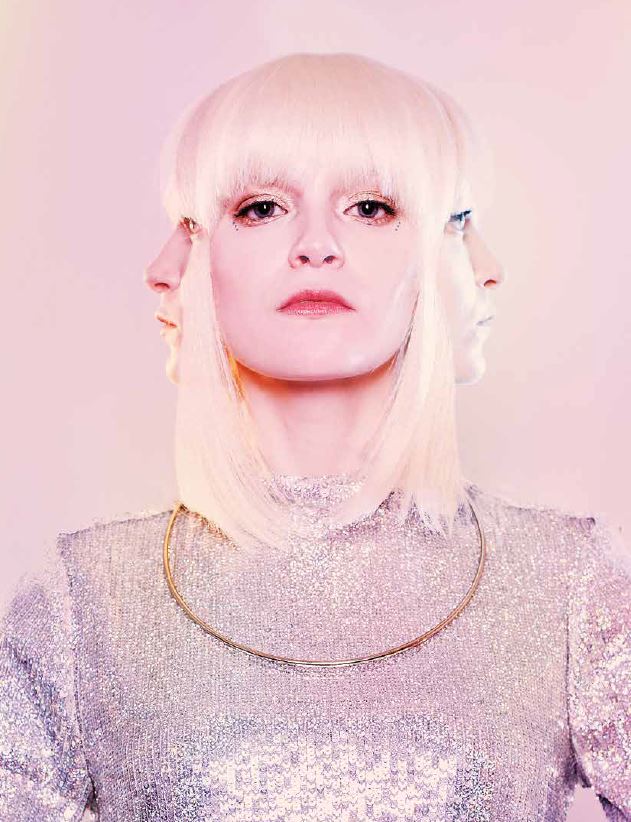 “Someoddpilot was a song title from a punk band my best friends were in thirty or so years ago, in high school,” says Chris Eichenseer, founder of the Wicker Park design studio and visual communication agency Someoddpilot. “Everything for me starts with the bands I was in or my friends were in. When you’re sixteen and you just discovered how fucked up the world seems to be and how amazing it is at the same time, you wonder: who is in control of everything? There are so many odd facets to reality, to time, to the universe—there must be some odd pilot flying the plane and taking us all on this ride. I guess I was asking that question then, and now with ‘Space Becomes You,’ I’m still asking it.”

“Space Becomes You,” Someoddpilot’s debut capsule collection and immersive art exhibition opened in November in collaboration with Public Works gallery, in an attempt “to construct its own unifying mythology both as a commentary on and as an answer to today’s political and cultural tribalism,” as they put it, and exists in three forms: a photography book, a gender-neutral apparel line and a short film. The immersive experience culminated with a dance party directly following the exhibition’s opening night and featured DJ Fee Lion (multi-instrumentalist, vocalist and founder, Justina Kairyte), who spun her signature pop new wave electronica, while a computer-vision-powered camera would detect, track and provide a real-time image projection of the partygoers on the venue wall—a futuristic reflection of themselves amid neon colors and laser beams. 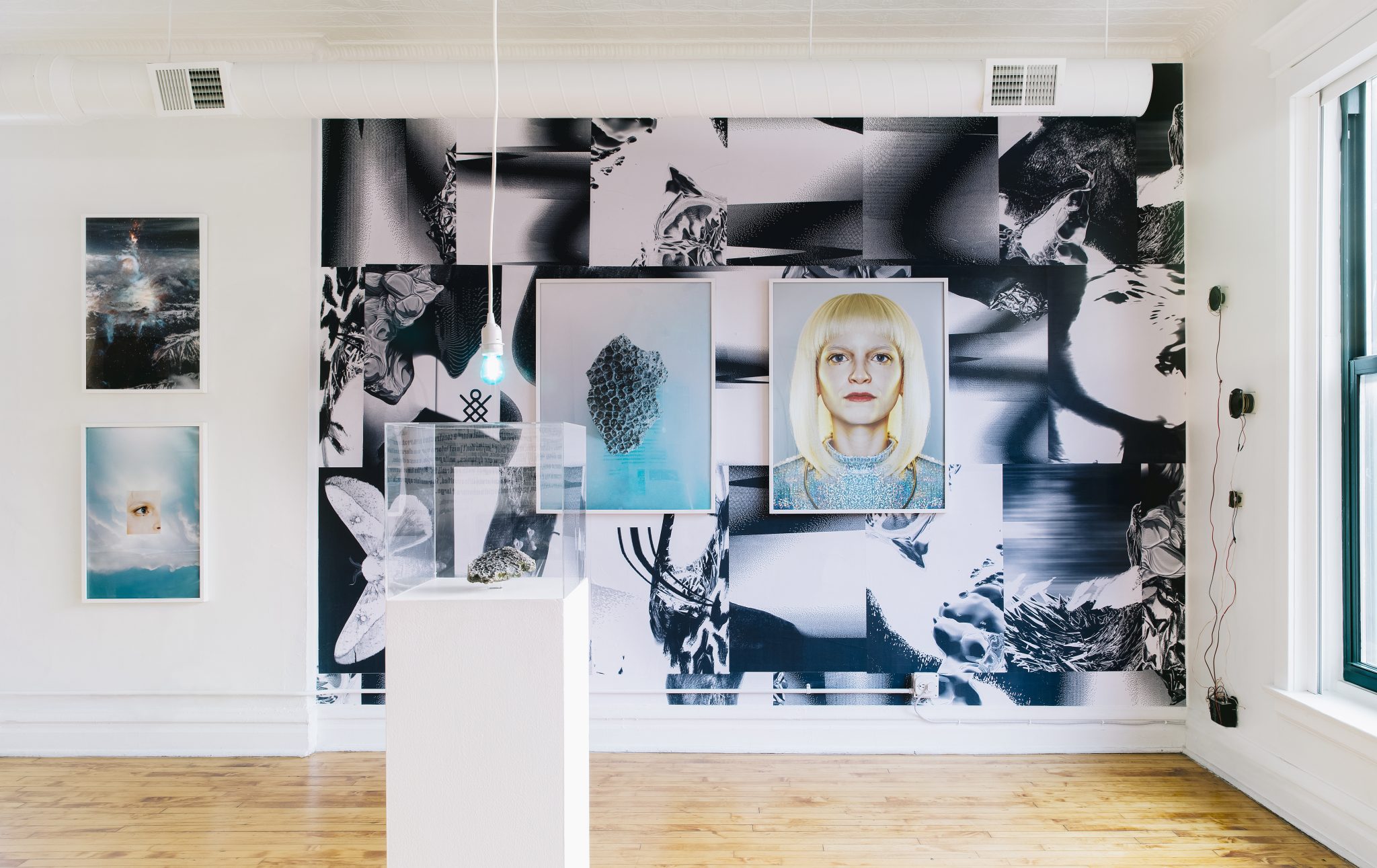 But before this space-oriented experience came to its fitting end, one could wander around the space and become a part of the interactive multimedia exhibition theme—a futuristic landscape of “space colored” imagery (pale, iridescent pinks, blue-greens and off-whites) on the walls, complete with bright-blue painted potted plants, upside-down smiley faces and in-your-face messages spelled out in neon text, such as YOU CANNOT BE DELETED.

Viewers are bombarded by what feels like a million questions: questions prompted by the exhibition visuals, questions asked during the intense short film, “YOU ARE FALLING THROUGH THE UNIVERSE RIGHT NOW,” questions projected in a small, makeshift theater in the gallery’s back room, questions coming out of an old-school television set hooked up with headphones that invite you to answer a printout questionnaire after you “sit and listen,” as a small sign at the left  bottom corner of a small desk indicates, and questions from within—the type you never knew you’d ever be asked. “Who are you? Why are you here? Draw a line to indicate your position on the following concepts: love, friendship, work, children, parents, humanity, future, past.” On one side of that line lies “Freedom;” on the other “Fear.” 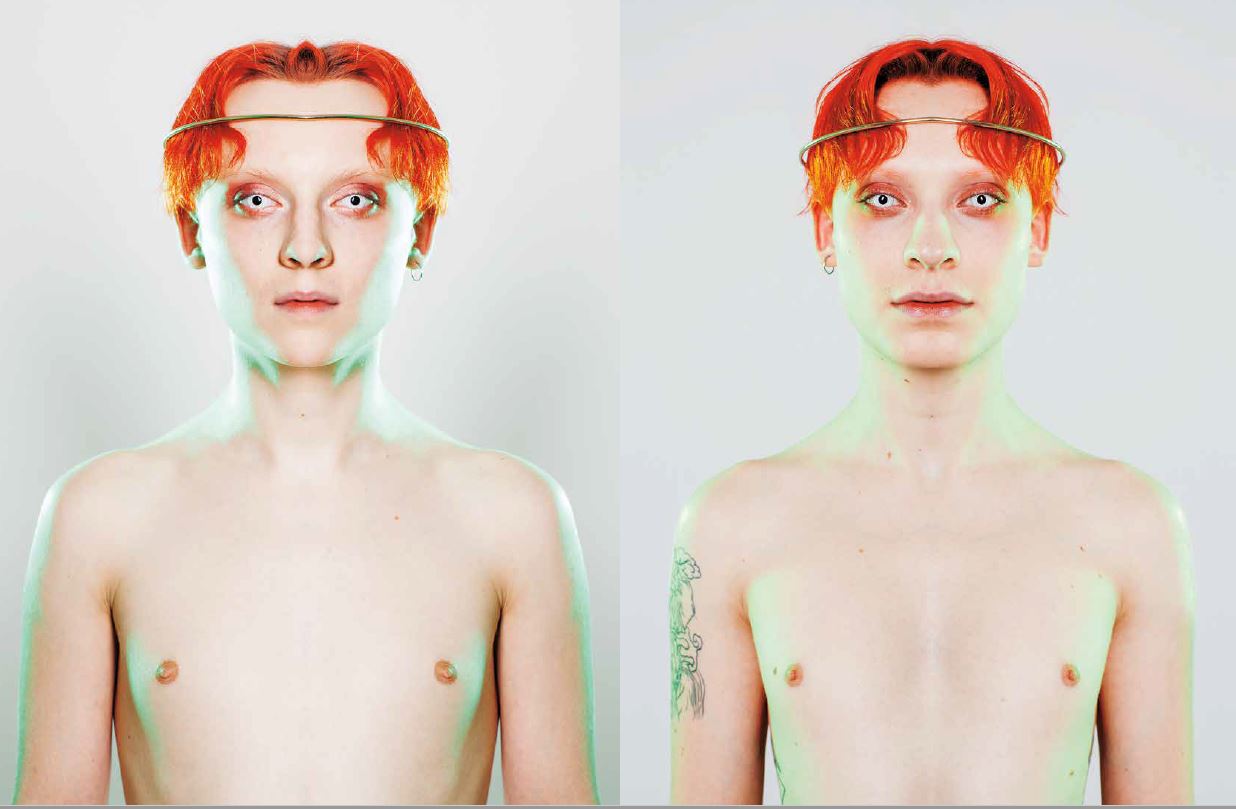 “My dad passed away two years ago, and in his last months I was trying to give him a perspective to frame life generally, something beyond culture, religion, tribes,” says Eichenseer. “The only way I know how to start to answer ‘Who are you and why are you here?’ is at the level of the cosmos,” he adds. “As we began exploring this project in our photography studio, it was completely open to play—there was no agenda, just playing with objects, images, models and wardrobes to build a world. Then we gave it a voice, and I wrote–with the help of a European UFO cult—what this world we were building believes in, and a year later when it was finished I looked at what we had done and thought: this is exactly the book I would have given my dad, to try to explain it all, before he died. ‘Space Becomes You’ is that—the belief system for nonbelievers. It’s how to make sense of your place in the universe. That’s why space is so important. It’s everything.” 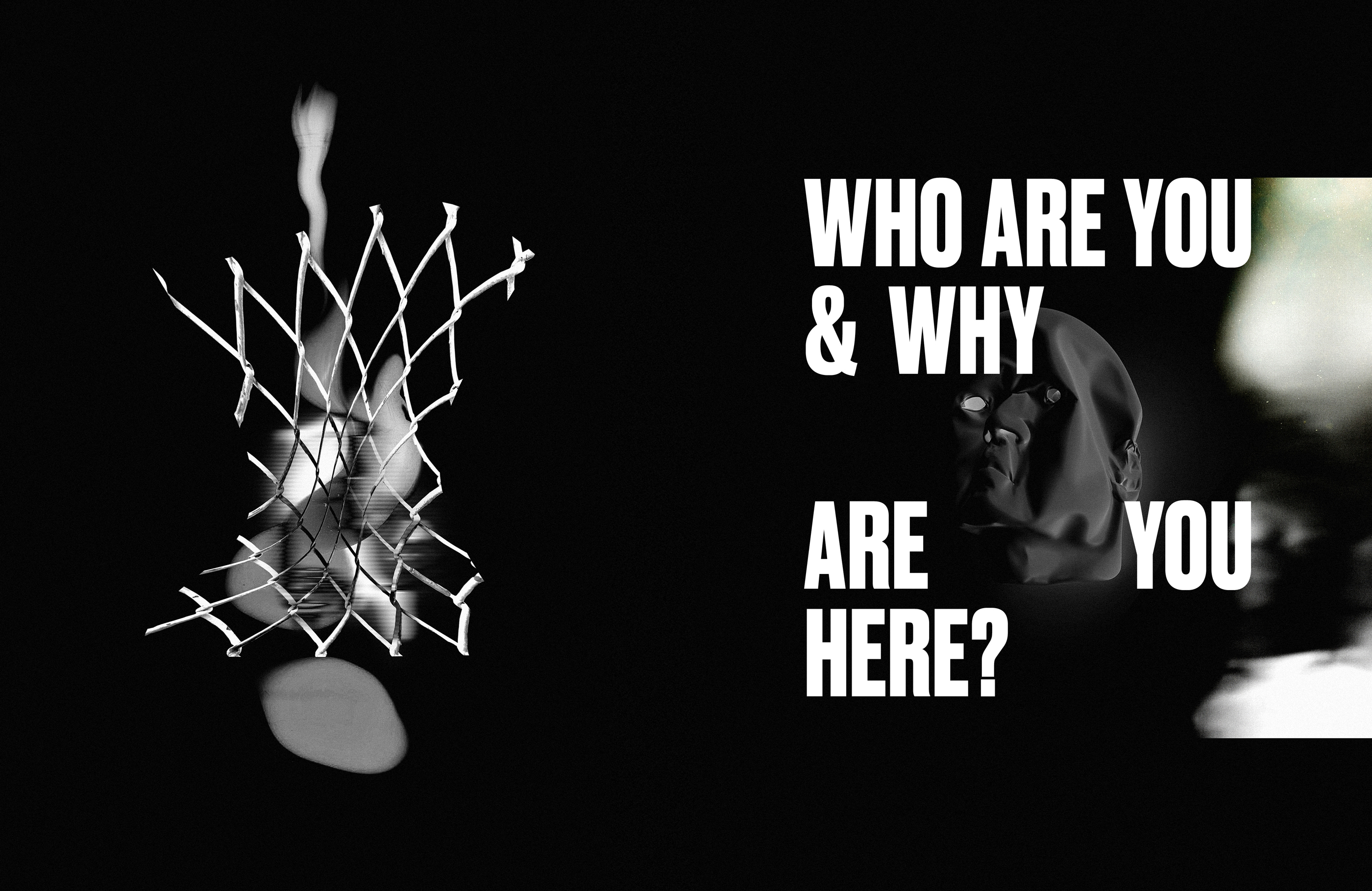 Eichenseer attributes their success to the studio’s nature—he calls it ”a hyper-collaborative, multi-faceted creative workshop.” And he’s right. Someoddpilot started as a record  label. “The way Someoddpilot has changed and grown… I didn’t see it coming. When I started, I just wanted to make album covers. I saw album covers—and liner notes and all the great pieces that come with a record—as art, one of the only types of art that regular people buy and own and touch and experience,” he says. “Our work for our label—covers, posters, sites, flyers—led to working with other indie labels, then venues, then a burgeoning editorial called Pitchfork. Branding them exposed us to global brands in a way I never saw coming. They were like ‘If you can speak to the festival kids, could you do it for us?’ The opportunity to brand and build worlds for large companies with a passionate following, like Patagonia, is exciting. The shift has given us an extraordinary perspective other agencies don’t have—we never meant to be an agency, and we approach it from an audience obsessed perspective: if you don’t mean something to someone, in spades, and you aren’t creating something unique and mind-blowing, no one is going to show up. No one needs you,” Eichenseer says. “Start there. And that’s mythology–who are you and why are you here? True for people, companies, bands, even political parties.” 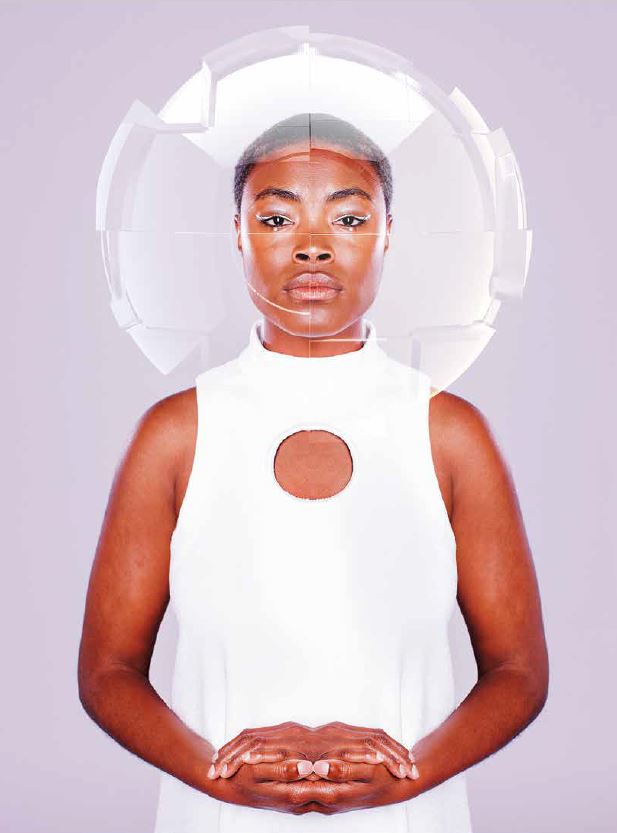 Soon thereafter, “Space Becomes You” was born. “With ‘Space Becomes You,’ we built the ultimate mythology—not to sell anything to anyone, but to unify humanity. No small task! Especially at this moment, when we’ve been divided by the rise of cultural and political tribalism. We waste a lot of time debating the minutia, but from the planet’s perspective, we’re all one. That’s what ‘Our Open Hearts Shall Change The World And Us’ is all about. Space Becomes You, You Are Space. That’s it.”

Striving to tell a story born out of the brands that we consume, the gods we create, and the shared languages that mediate these forces, as the extraordinarily designed coffee-table book reads, is a psychedelic trip that examines the big questions myths are based on. That’s what “Space Becomes You” is  all about. At the intersection of Chicago’s design, music and visual arts scene for twenty years, the Someoddpilot team contemplates valid questions. 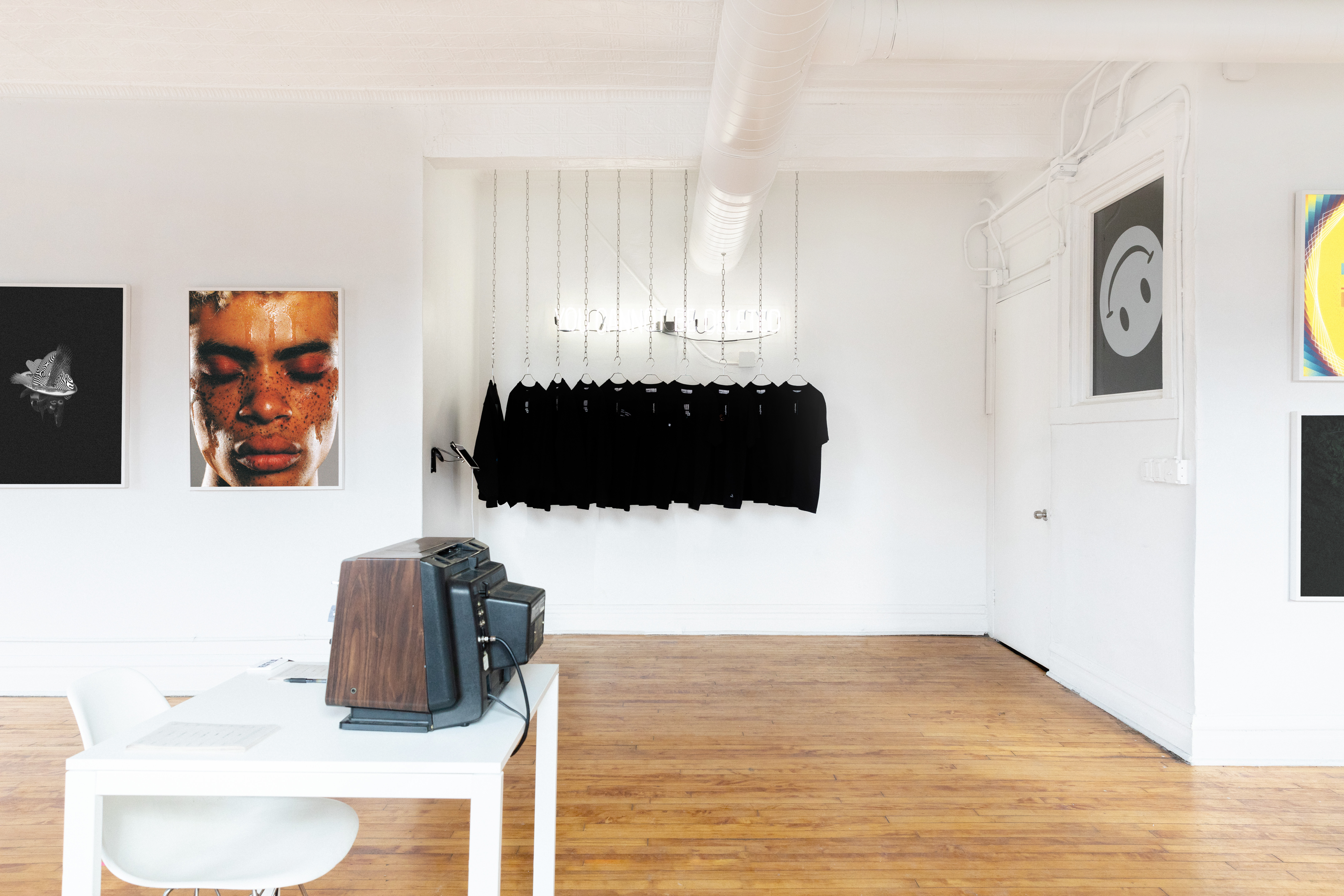 “I’ve always thought: where’s the mythology for the rest of us? For the progressive, liberal, adventurous; for the new and uninitiated, for the non-joiners, the nonbelievers? What do we believe in besides ‘Star Wars,’ Obama, La Croix, a free press, and Whole Foods? Mythology is a powerful force in our culture, so powerful that it IS our culture. We all subscribe to several mythologies at once, we are influenced beyond our understanding by them all. If we were to create the ultimate one, on the scale of the universe itself, with nothing but science and art and playfulness and no unnecessary supernatural anything, what would that look like?” 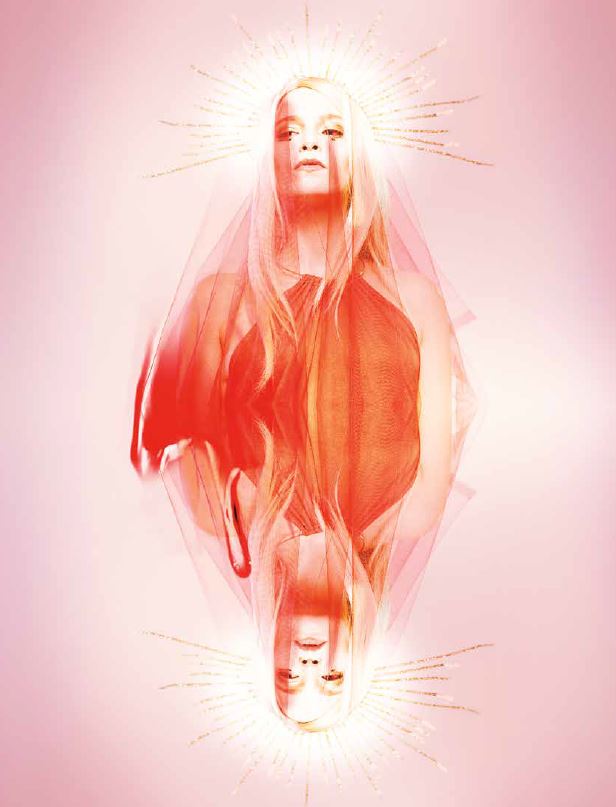 This may be too odd or uncomfortable to face or think about but Eichenseer is unstoppable—and for good reason. ”Joseph Campbell said ‘The only myth worth thinking about involves the planet, not this city or this people, but the planet and everybody on it.’ Despite the discord, we are much closer to acting as a planet than we ever have been before. This is the future. Well beyond genders, races and species even—total inclusion and unity. If stardust made you, it also made that fern and that rhino. Stop thinking you’re special, or that you have the answer. The only answer is the universe, and whatever the hell it wants to do. Your job is to just enjoy the ride. Reject fear, embrace the freedom you have! Open your heart, there’s room for everyone, even the people you don’t agree with it. Forget all that other shit. It’s just noise. ‘Our open hearts shall change the world and us.’ That’s it,” he says. Short answer: “This is like a radical new cult I didn’t think I needed.”