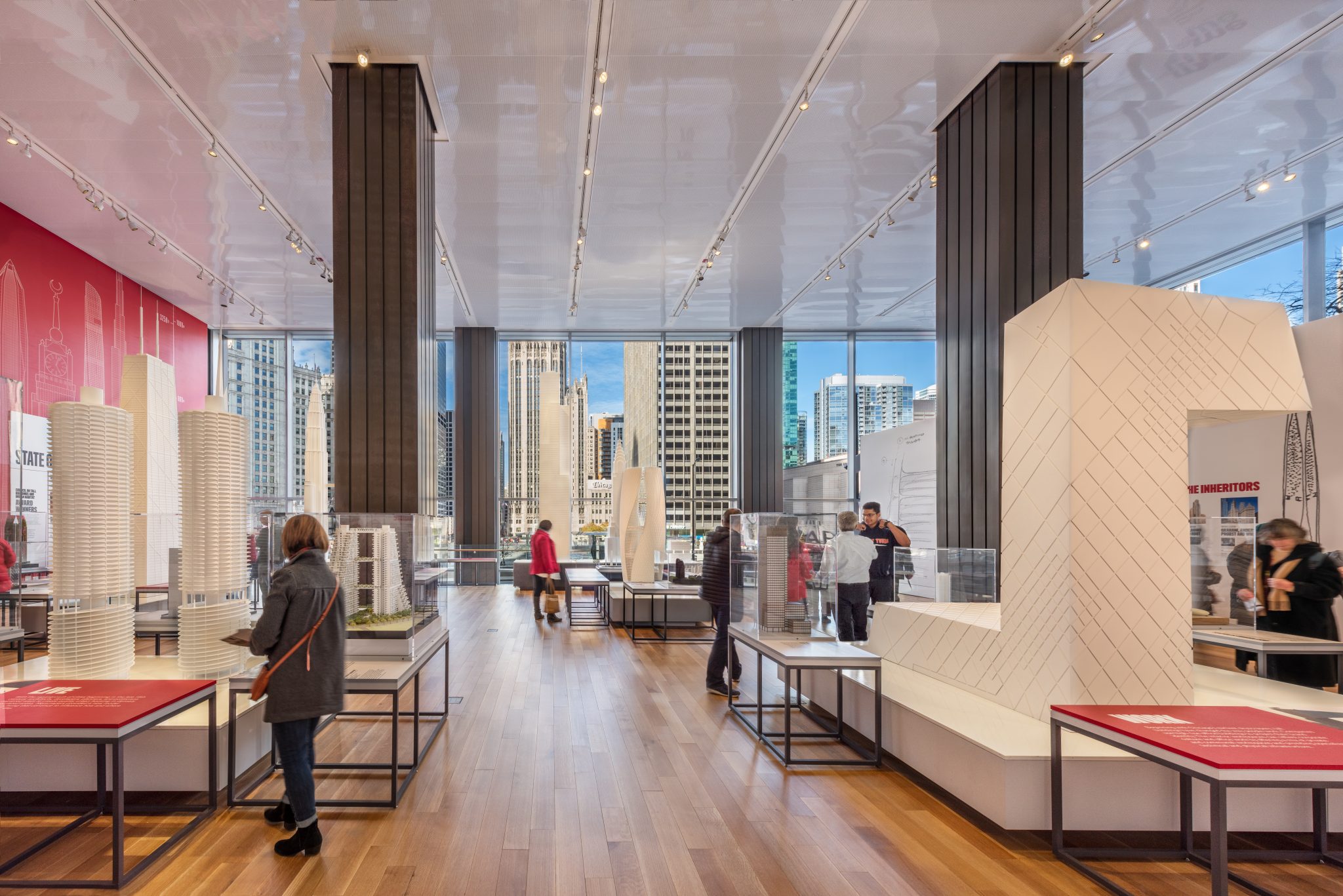 If you live in a big city long enough, you get desensitized. World-famous buildings turn into little more than the phases of a commute. The city becomes a featureless mosaic, a backdrop for internal struggle.

By bringing dozens of the world’s most famous buildings into the same room, the Chicago Architecture Center’s “Building Tall” restores the thrill of architectural accomplishment. Glimpsing scale models of Chicago’s Marina City and the Willis Tower alongside Beijing’s Leeza SOHO and Singapore’s pink-walled, ivy-covered Oasia Hotel Downtown evokes their embedded splendor—the thrill of grand-scale achievement it’s so easy to forget.

Chicago is well-represented at the show in scale models of numerous iconic buildings, and in native firms responsible for global feats like Dubai’s Burj Khalifa (Skidmore, Owings & Merrill), the tallest building on earth. Early in the exhibit, the city is cast as a bedrock of architectural innovation, credited with the world’s first skyscraper: the Home Insurance Building, erected 1884-1885. Rising ten stories high (138 feet), it was, as architect William Le Baron Jenney put it, the first “stratosphere-scraper,” and the tallest non-cathedral building in the world.

Writ large, the show is targeted at the non-expert, who’s likely never seen such detailed models, and who doesn’t know about mechanisms like wind-tunnel testing or tuned mass dampers. It presents statistics in a highly digestible way, like that the total weight of concrete used in the Burj Khalifa equals 110,000 elephants, or that the building took twenty-two-million human hours to complete. In the same minute, a child can call their parents over to see an eccentric structure in miniature, and their parents can explain what twenty-two-million human hours means. 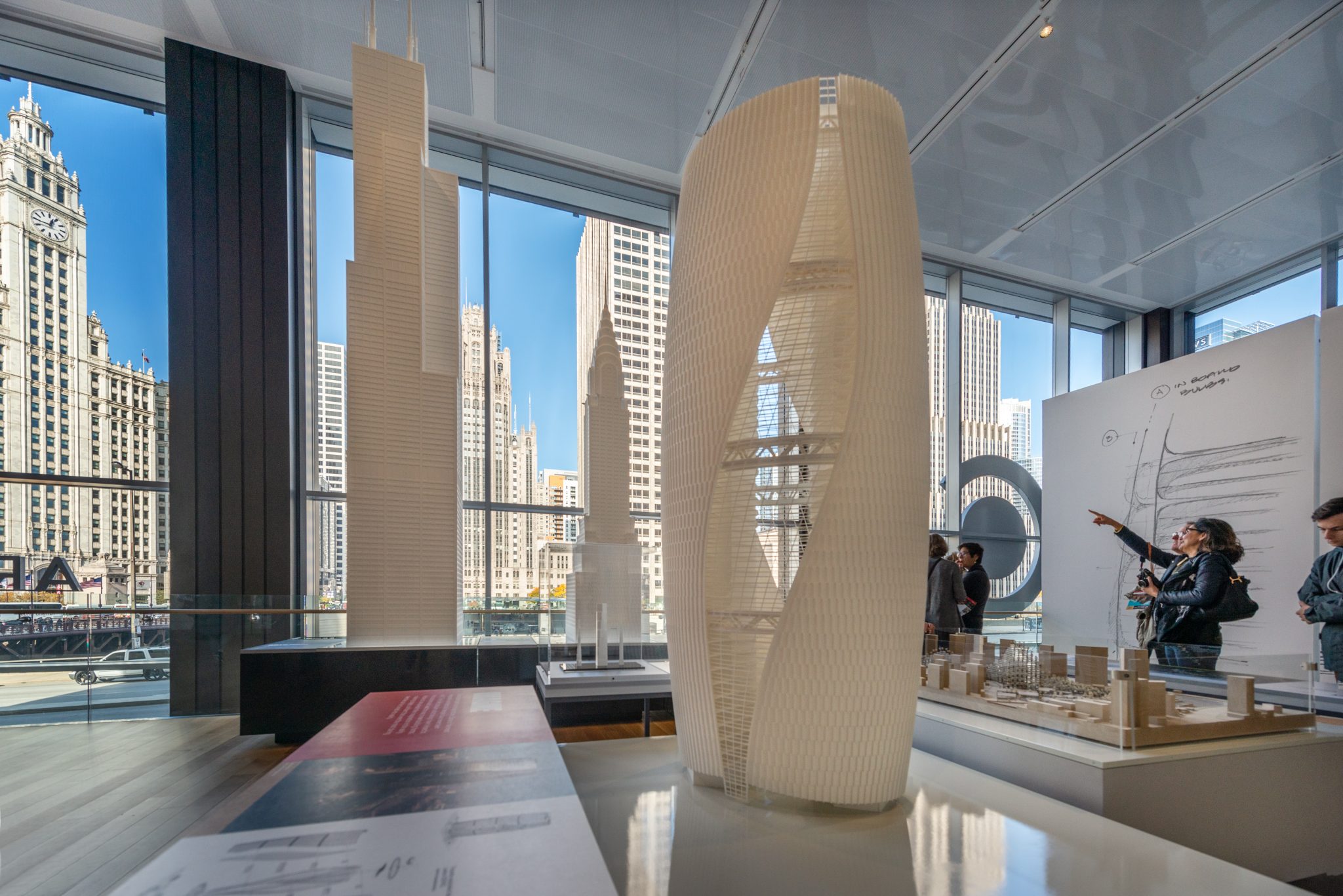 If there’s a conflict in the exhibit, it’s the lionization of upward progress: growth for the sake of growth, a principle at the core of colonial and environmental misdeeds. It’s a tough call. One easily gets wrapped up in the adrenal, consequences-be-damned thrill of it all, and it does engender childlike eagerness. But with the specter of Trump Tower looming directly across the street, it’s hard to forget about the damning consequences brought on by this mindset.

However, the exhibit does present environmental sustainability as a sure—if recently evolved—component of effective architecture. A scale model of Shanghai’s twisting, 2,073-foot Shanghai Tower, completed 2015, is accompanied by text explaining how its transparent second skin works with the environment to regulate internal temperatures.

Perhaps the most charming aspect of the show is its interactive portion, which challenges participants to turn a single sheet of eight-inch-by-11.5-inch printer paper into a support device for ten novel-sized books. One thirteen-year-old, Wesley, took the task especially seriously, working through several drafts before coming to a well-balanced final product. Upon finishing, Wesley drew applause from a small crowd of spectators.

It was a prime example of construction projects’ universal appeal. We like a challenge, and we like to beat the odds. In the presence of dozens of the world’s architectural marvels, it felt like we were all part of the same human project, inseparable from the firms and workers who imagine, design and execute it.

“Building Tall” is on view on the Chicago Architecture Center’s second floor through March 2019. Museum admission is $12.