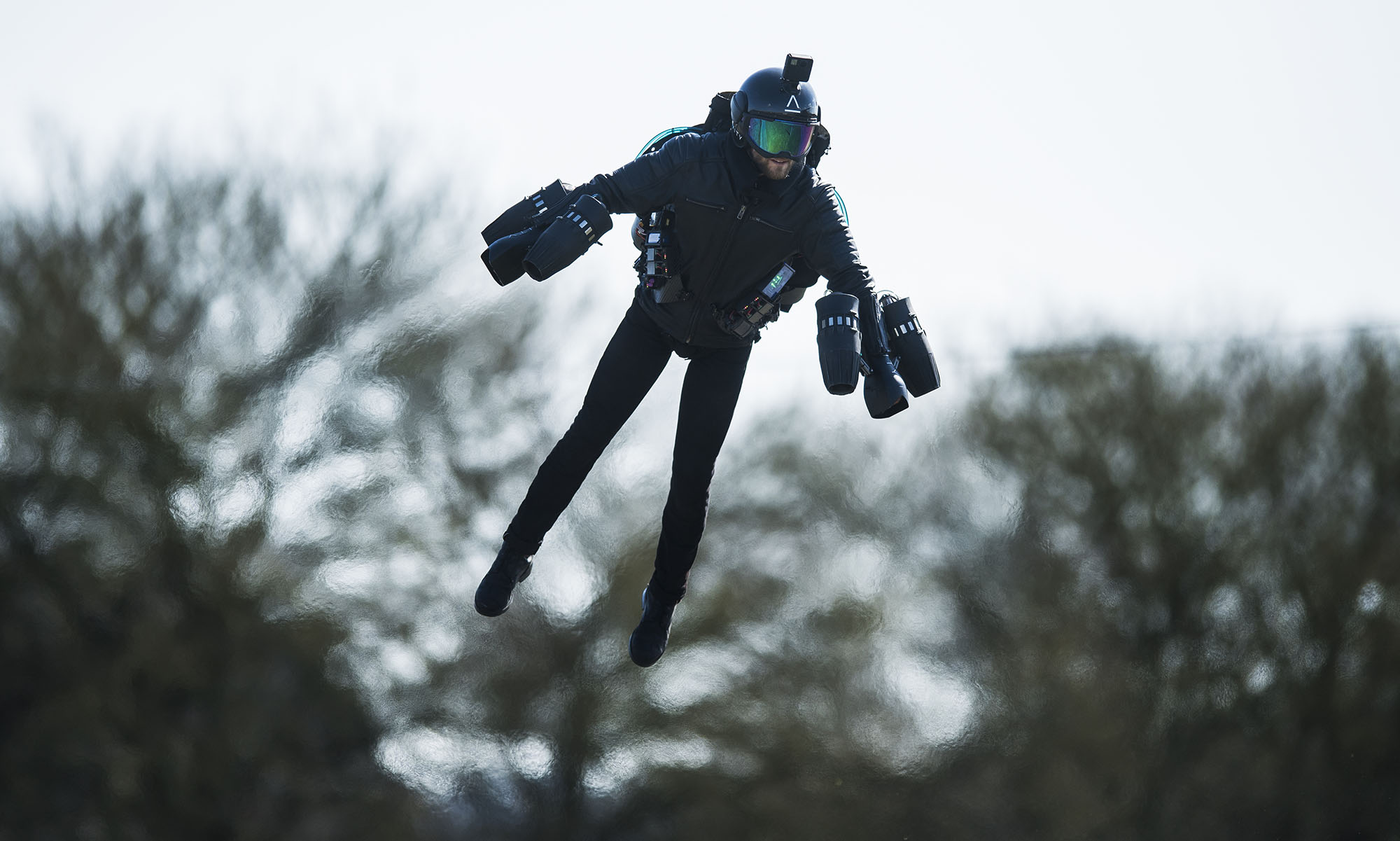 If I were to own one thing in “Wired to Wear,” an exhibit of wearable technology at the Museum of Science and Industry, it wouldn’t be the functional turbo jetpack suit that allows the wearer to fly. I don’t need to fly—I like the anonymity of taking the train. It wouldn’t be the headband that tracks brainwaves while the wearer sleeps, then plays audio frequencies to make sleep deeper. I could use a hint of insomnia to offset my perpetual sleepiness. And it definitely wouldn’t be Microsoft’s “smart” tattoos, temporary patches affixed to the skin that can control phones remotely. I don’t want to email anyone from my forearm. The phone I clutch in my hand is already close enough.

“Wired to Wear” showcases gadgets that put “Q” to shame and make Björk look like she walked out of a J. Crew ad. It’s fun to play around with backpacks with programmable pixel maps of rabbits leaping after bouncing carrots to the tune of the low-key club music that pipes through the exhibition. Just don’t think too much about what it means to embrace constant data collection more than we already have.

“Wearable” is a term used to encompass clothing, accessories and the growing field of objects that are neither-nor. Some of these are recognizable as garments, like a lacy pink evening gown with buds of LED-lit Swarovski crystals glowing softly. Others, like an elegant, torso-sized cage that administers electrical shocks when the wearer lies, or a trench coat that starts barking when motion sensors pick up on people moving in too close, are more speculative. One collar, inspired by the iridescence of male hummingbirds and the drama of Elizabethan collars, is encrusted in concentric rows of petals that move in response to the person facing them. They’re cued by a hidden facial-recognition camera. I smiled at the iridescent discs and they rippled pleasantly. I frowned and they began shaking violently. 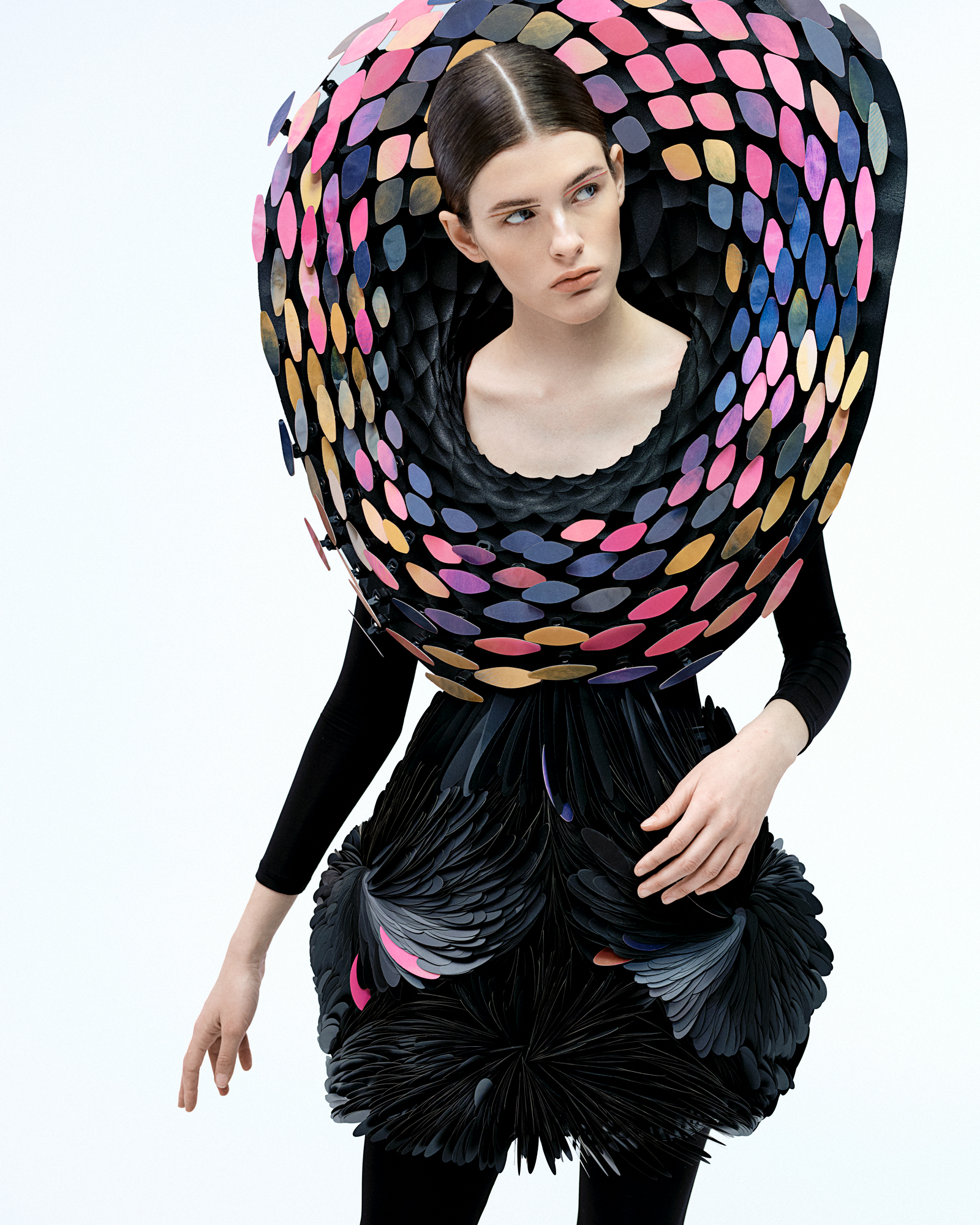 The most inventive creations were developed by people with disabilities and limb differences to be used in their own lives. One wristband steadies the hand of one with muscular dystrophy, making it possible for the wearer to write and draw. A rhinestone-encrusted leg prosthetic was custom-built for a musician: it also has built-in speakers. There’s even a prosthetic arm that looks like a lavender-colored unicorn tusk, designed by thirteen-year-old Jordan Reeves, that shoots biodegradable glitter. Many of these approaches are as playful as they are functional. They also show how technology can help us stop treating limb differences and disabilities as deficiencies, and start treating them as superpowers.

But other wearables’ slick design and technological sophistication disguise their fundamental purposelessness. “Embr Wave,” for example, is a sleek silver wristband that applies heat or cold to the inside of the wrist, where there is a high density of nerve endings. This slightly alters how the wearer perceives their body temperature, although it doesn’t change body temperature itself. (The company’s tagline is “Hack the way you feel.”) It’s nifty, but is it necessary? 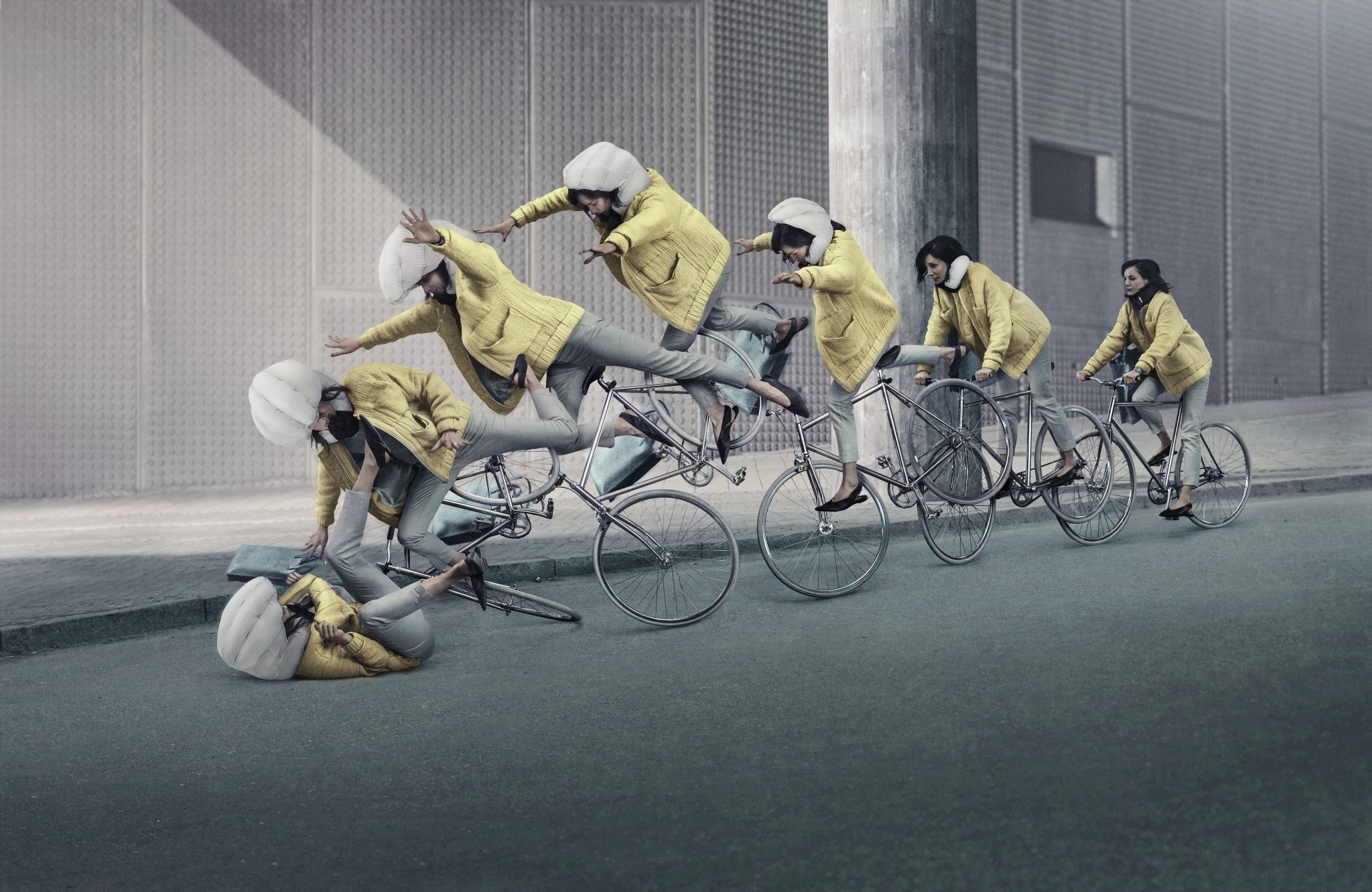 These gaps in logic were particularly poignant in sports-related gear designed to reduce injury while perpetuating the risky behavior that does the damage in the first place. A motorcycle racing suit with built-in airbags, designed by Lino Dainese, monitors its wearer one thousand times a second, sending the data to an internal computer. When it detects impact, the airbags automatically inflate. The concept is similar to an undershirt meant to minimize traumatic brain injuries and whiplash among football players: the gel-like substance in the collar stiffens upon impact.

If “Wired to Wear” is a glimpse into the future, then it promises further reliance on wearables for basic information on our own bodies, and further reliance on technology corporations to supply what we consider necessities—a future where even haute couture collars are equipped with facial recognition technology. But the underlying assumption of the exhibition is that technology always makes our lives better: that wearables will make us safer, stronger, better-rested, less stressed-out, healthier, and more entertained. In a word, happier.

“Wired to Wear” is on view at the Museum of Science and Industry through May 2020. Museum admission including ticketed experiences is $31.95.