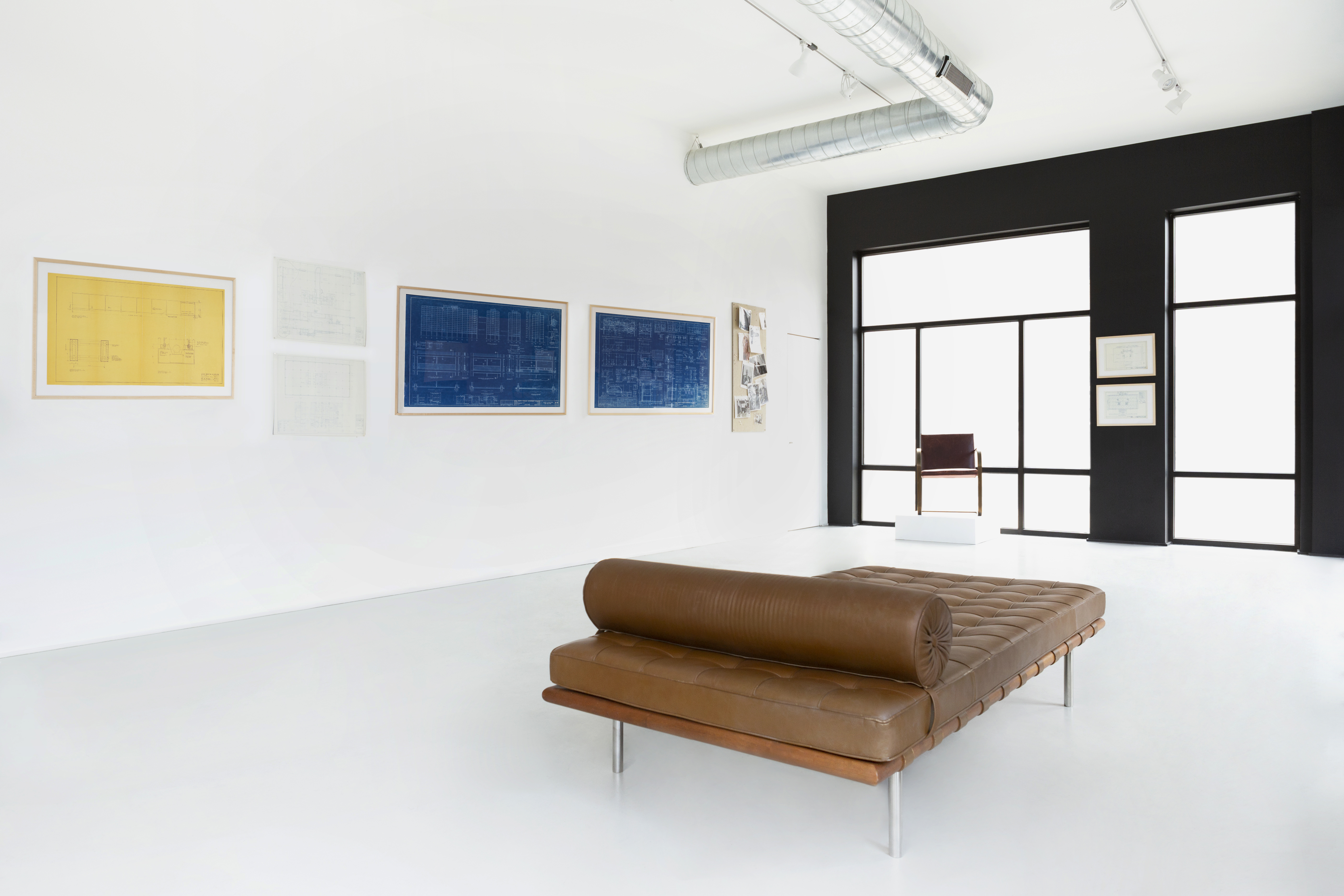 There is probably only one person living in America who knew Ludwig Mies van der Rohe before he moved to Chicago and ultimately became one of the most influential figures in Modernism. Dirk Lohan was born the year his grandfather Mies emigrated, meaning even he did not know Mies before he was Mies.

Dirk and I met at Matthew Rachman Gallery for a conversation set in a collection of his grandfather’s original blueprints, artifacts and furniture. “Mies became famous for his ideas,” Dirk tells me. In Berlin, his work that had the most impact was a series of drawings and models for buildings that were never built. His concept work for the Friedrichstrasse Skyscraper Project suggests a supporting steel skeleton, which frees the building’s exterior walls from a load-bearing function. This allows for centralized access and control points, which opens space and offers floor-to-ceiling windows. Although common today, these ideas were revolutionary in 1921. He went on to direct the Bauhaus for two years until it was shut down by the Nazi regime in 1932, then became head of architecture at the Illinois Institute of Technology. “He lived in Berlin and Chicago for exactly thirty years each, and it is so interesting to compare what he did in the two cities. It shows that he was ahead of his time.” Most of his built work was made after he moved to Chicago, including S. R. Crown Hall, the Kluczynski Federal Building and the Farnsworth House. 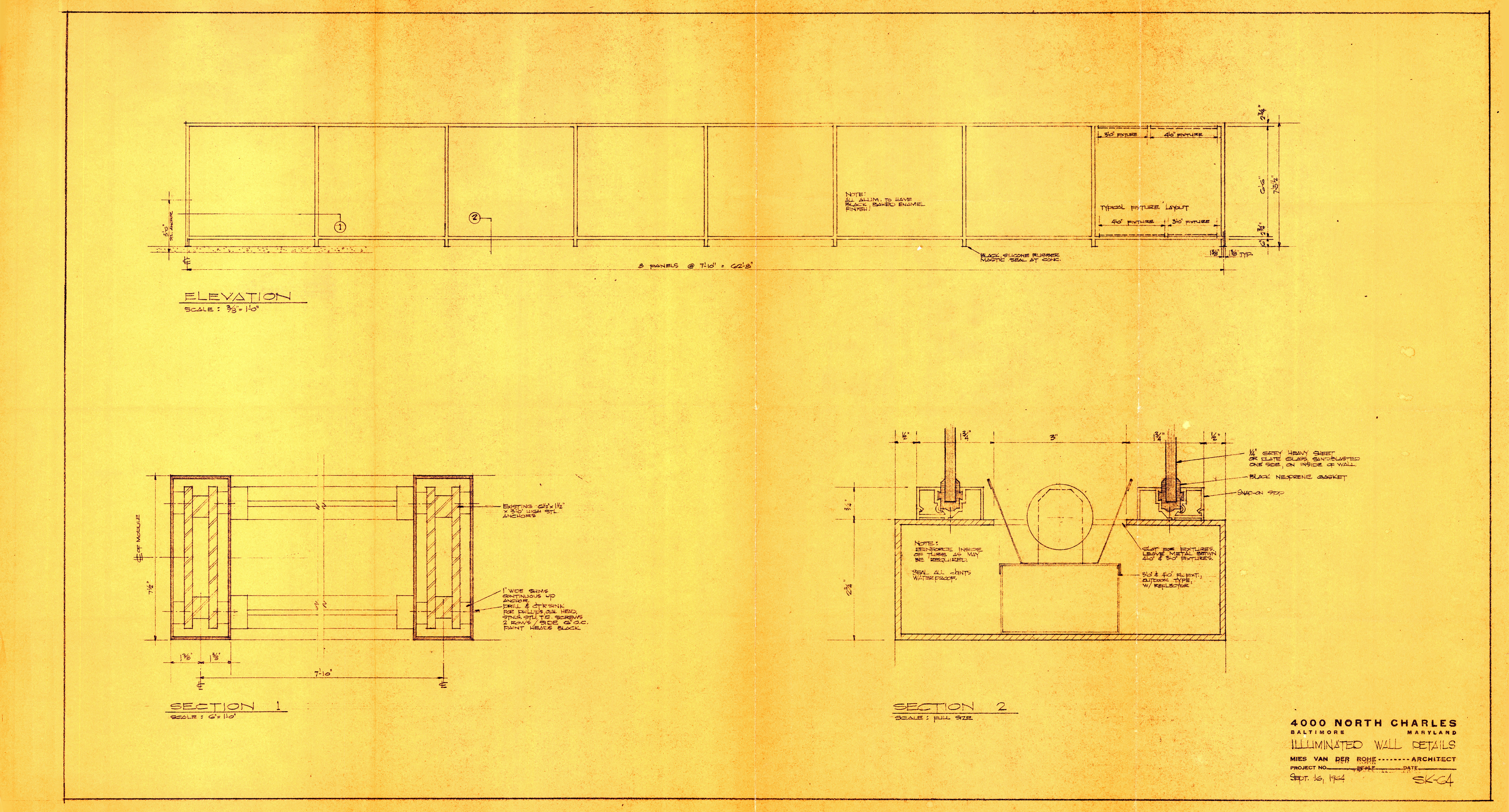 The best place to get to know Mies is in the process. The “Mies van der Rohe: Chicago Blues and Beyond” exhibition presents his process carefully. Each object focuses and articulates his work in a way I had not seen previously. In this way, his work is quite literally exposed, celebrated and unfurled—well, except for one particular corner. One highlight of many is an original, well-worn prototype chair made for the lobby of 860-880 Lake Shore Drive. It has developed a heavy and rich patina over the years, and rests below a blueprint of its cushions that was referenced in the model’s production process through 1953. The series of blueprints on display in the gallery does a good job of highlighting the intense and intricate planning that went into a Mies project. His ability to design holistically, and consider every detail with technical rigor, is obvious in his complete drawings for buildings. It is much more powerful when put in context. His furniture blends into its surroundings, reveals an emphasis on form and line, and nods toward his minimalist and rationalist architecture. 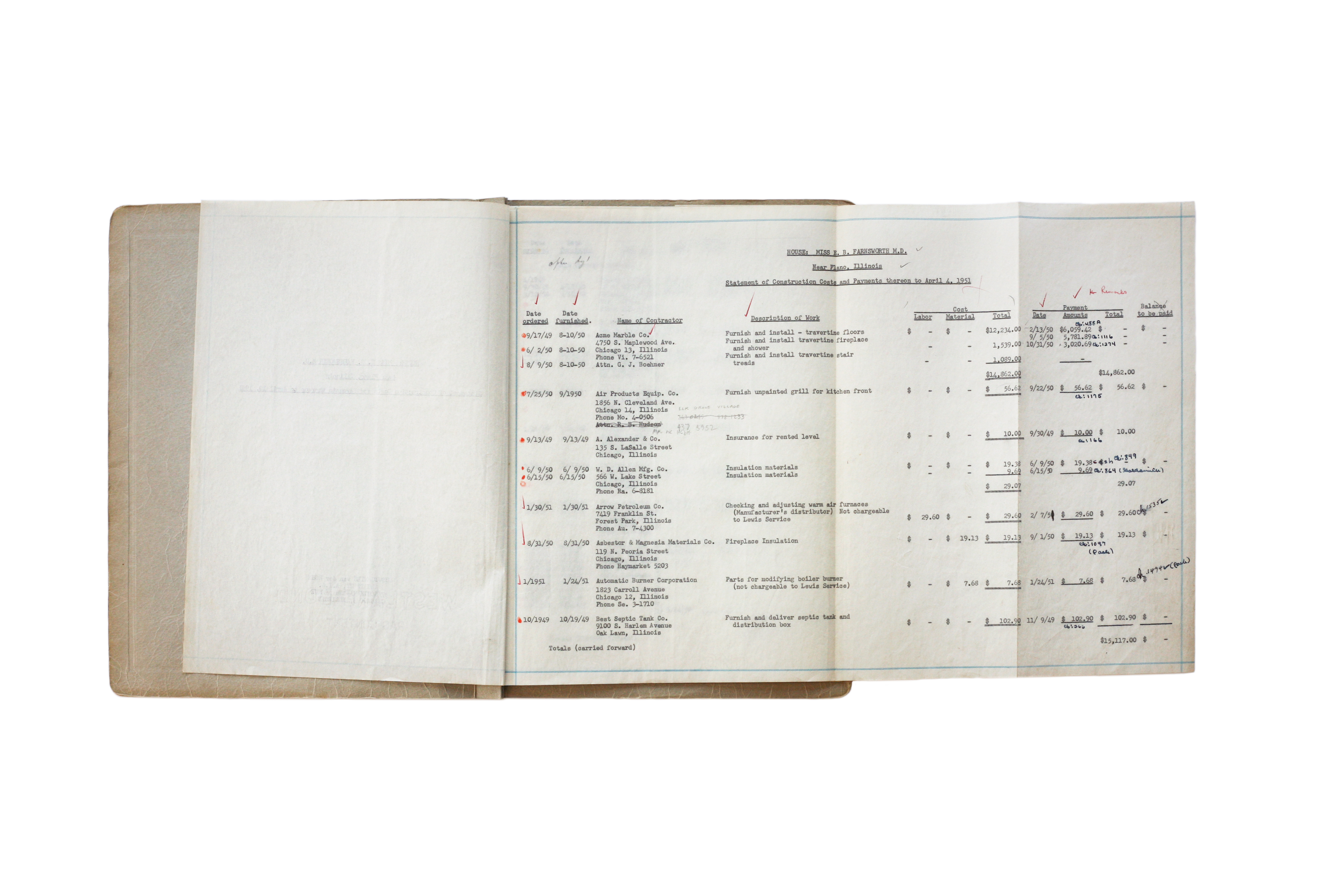 As a child, Dirk would receive 8×10 black-and-white photographs in the mail from his grandfather. He grew up with pictures of buildings like 860-880 hanging in his bedroom, captured by the incomparable architectural photography firm Hedrich-Blessing. “I’m sure that subconsciously added to my wanting to be an architect,” he recognizes. A nearby set of plans made for 111 East Wacker Drive in 1968 features handmade notations from the construction process. It makes me feel feelings, so I ask Dirk how he sees the work. “Well, it brings back memories—particularly the blueprints.” In 1957, Mies invited Dirk to Chicago to study architecture under his tutelage. Eventually, Dirk, too, emigrated, working closely with his grandfather on several important projects. 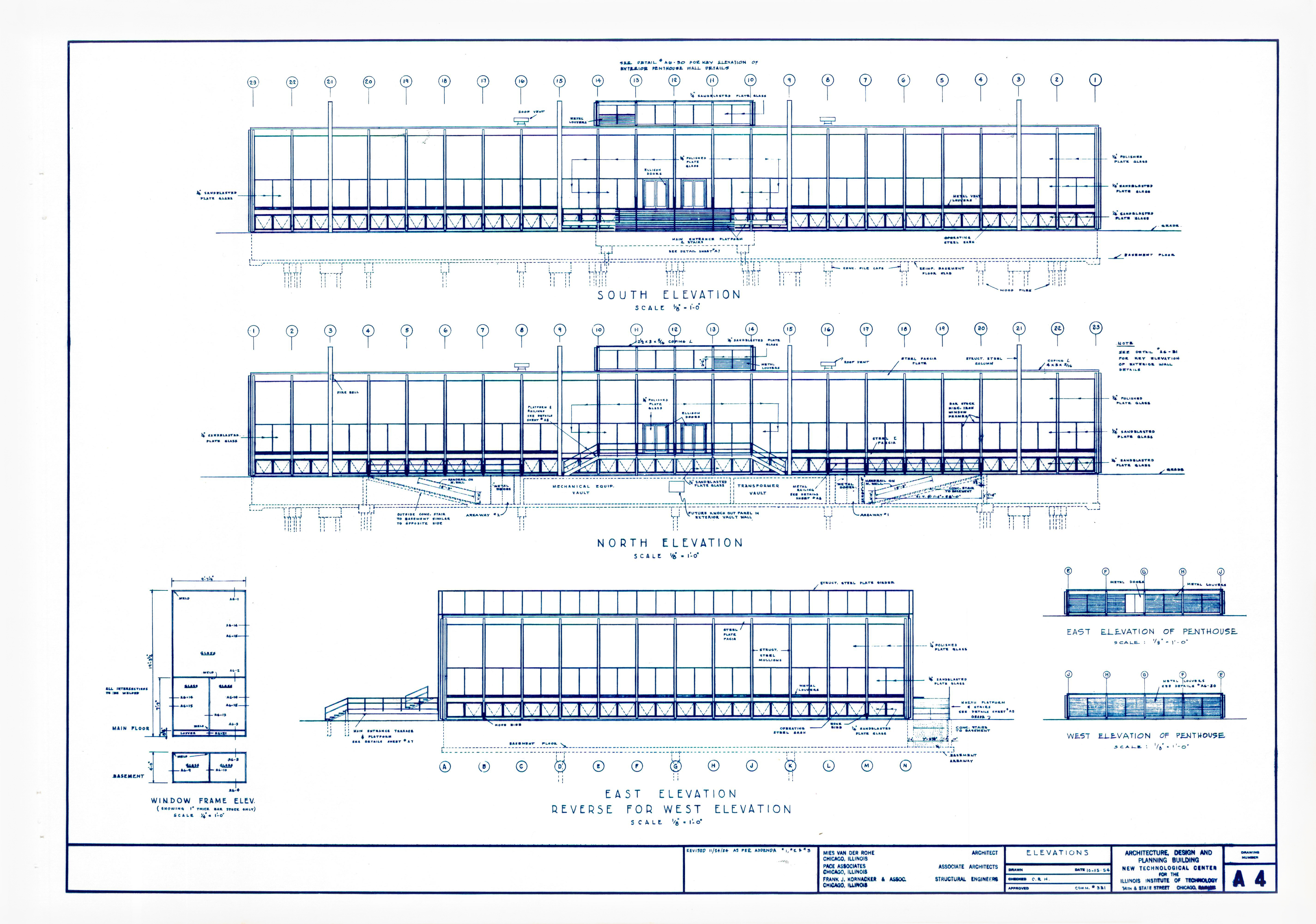 Looking back makes me want to look forward. I ask Dirk to speculate on what his grandfather might think walking through Chicago today. “I think he would notice all the changes, new developments, and the scheme of the next generation of buildings,” he says. “I don’t think he would be surprised. He had also experienced the strength and industrious ability of the city of Chicago in his time.” It feels clear that a gallery show like this is not possible without the strength of its city. Many of the historic objects are on temporary loan from T. Paul Young at the Bauhaus Chicago Foundation. In addition, a portion of proceeds from sales will benefit the Farnsworth House. The home needs about $5 million in restoration. 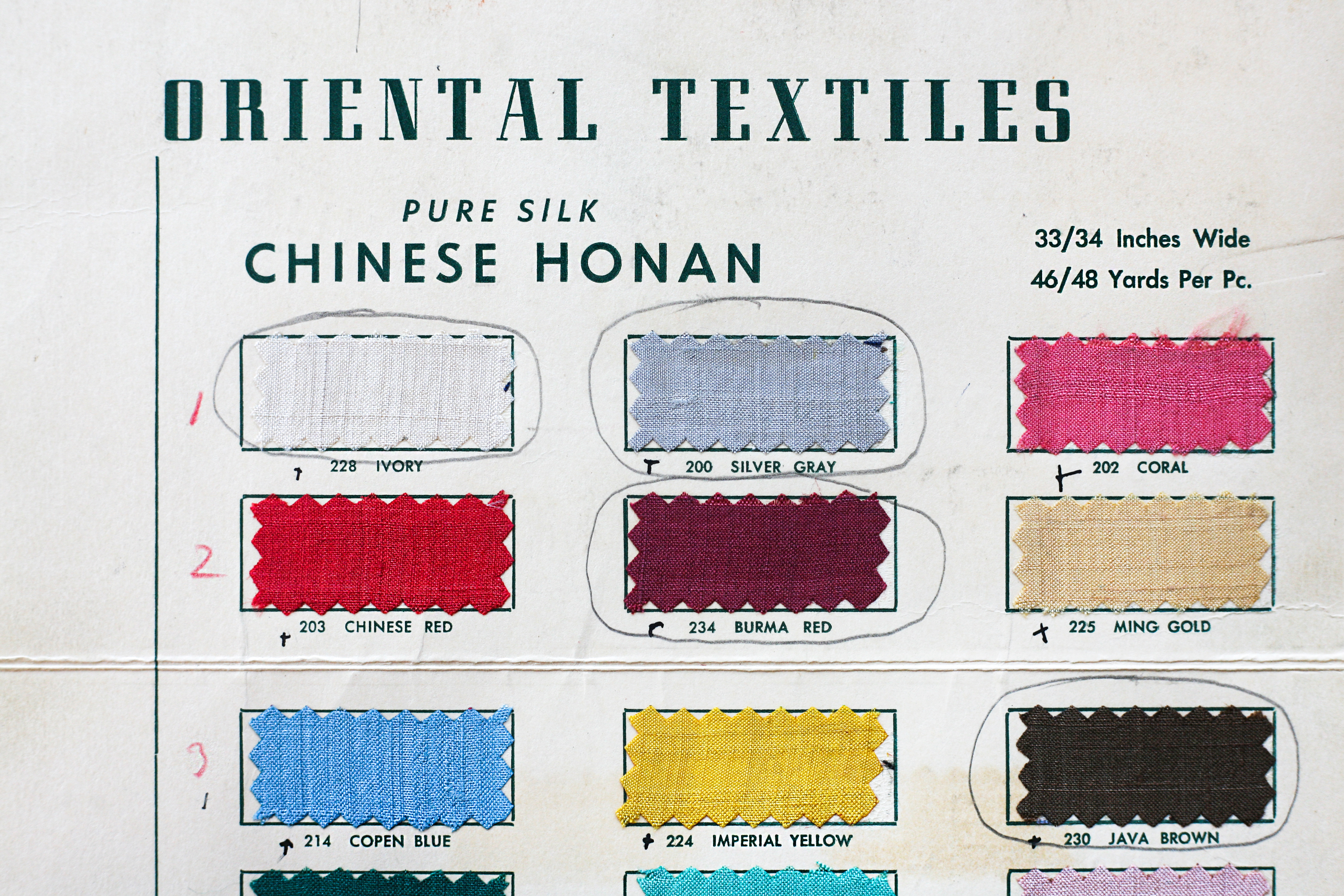 Beyond affecting the way we live our lives, Mies’ work begets greater significance and beauty among its residents and viewers. Yet, he always finds a way to bring me back to the details. While inspecting the MR Chaise lounge chair, reupholstered in Brazilian cowhide, Dirk recalls that Mies didn’t have much leather furniture in his apartment. Minutes later, we find a matching example of his preferred textile in a collection of samples from the design process of the Arts Club of Chicago. These materials sit beside a sample of original drapery from the Farnsworth House and a statement of its construction costs. The stories and connections here are palpable. 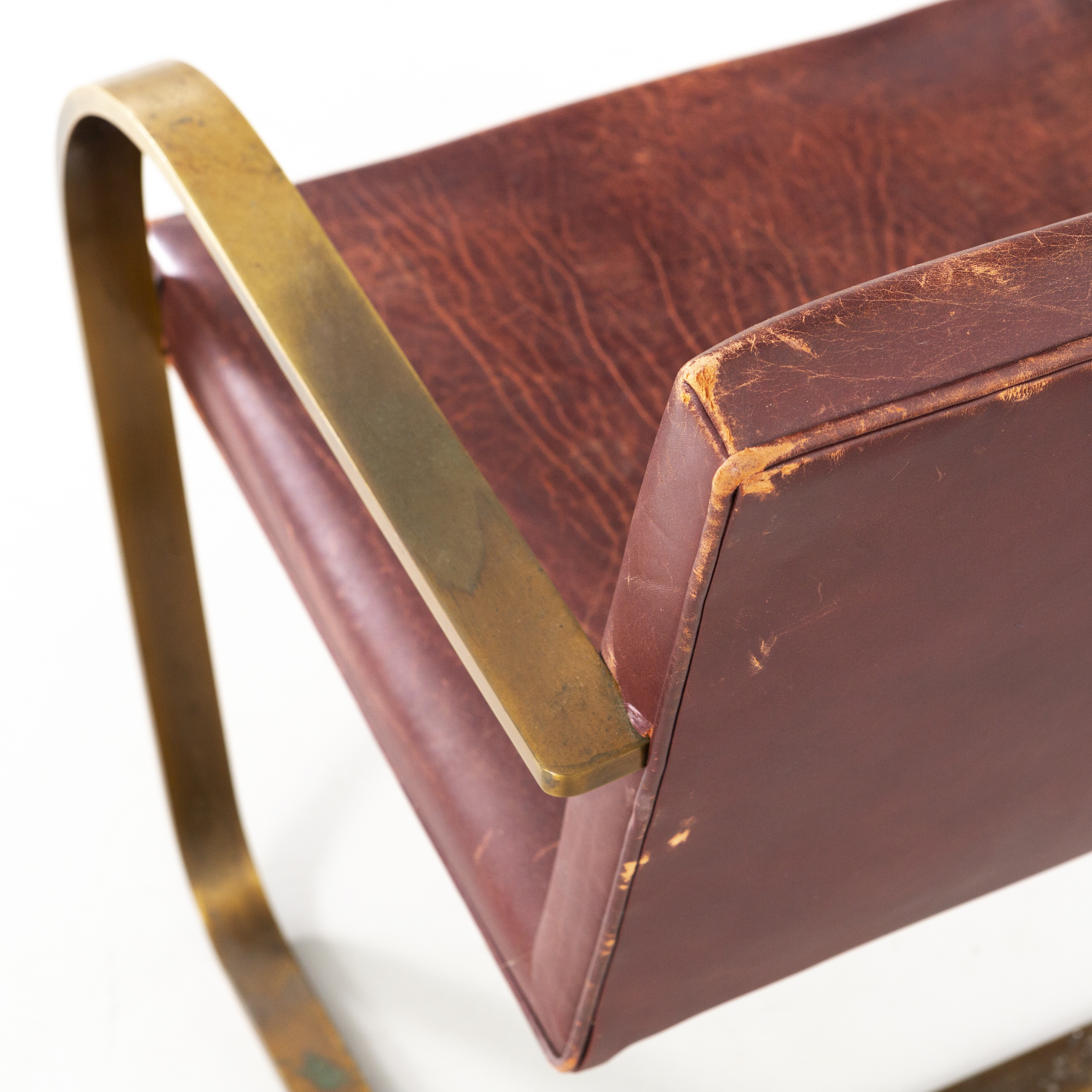