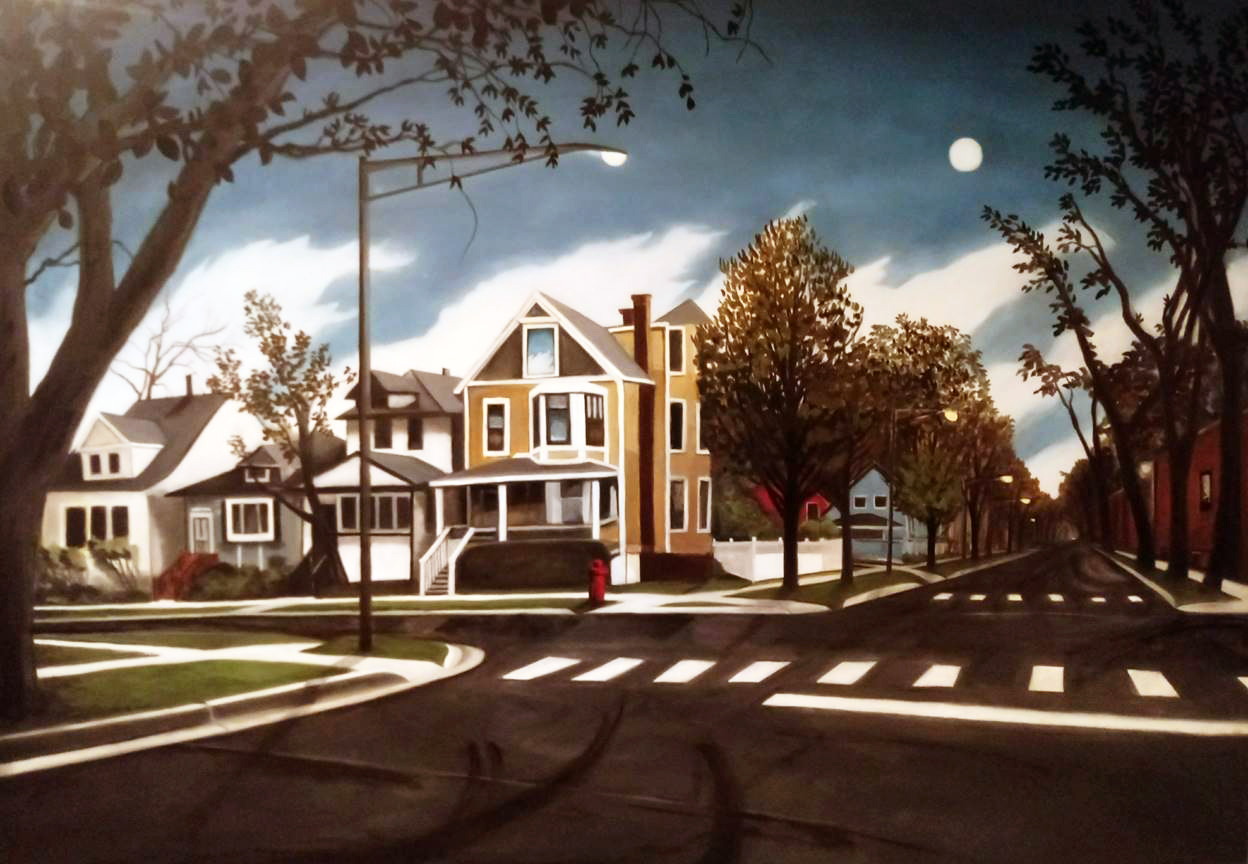 The first warm evening in May, artists and designers gather at The Golden Triangle to honor the emporium’s thirtieth anniversary. To commemorate the date, ten Chicago-based artists were invited by The Golden Triangle owners Douglas Van Tress and Chauwarin Tuntisak to create and contribute what they felt would be their best work—the Global Best. The 18,000-square-foot store space is like a rugged museum, each room featuring work from the celebrated artists, flanked by vintage artifacts from across Europe and Asia. 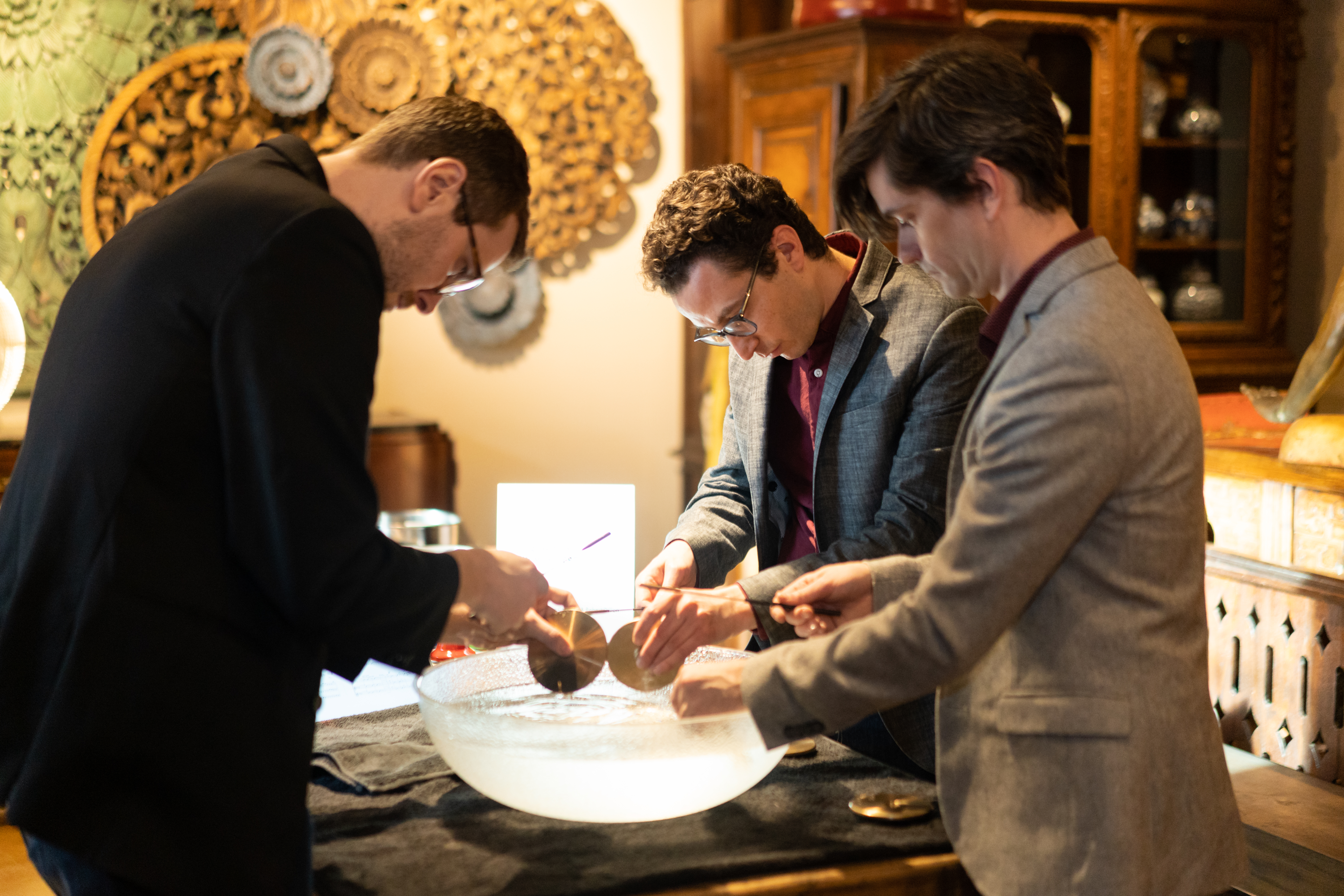 Guests are welcomed with the sounds of Fulcrum Point, an experimental music group. Three players position themselves around ceramic bowls of water and bells. They play the bells by drumming on the dishware, generating a clear, crisp and exuberant melody that has most of the room grooving along. Near the dessert station, where Thai specialties are made fresh in front of guests, is Mark Yee, a Chinese American whose abstract painting was inspired by his son’s school photo. The piece took months to complete, as Yee worked through shifts in perceived and performed forms of Chinese identity. At first glance, muted terra cotta red drips own the surface as it weaves over and under gold leaf, ink and house paint, beneath which is the silhouette of a horse. 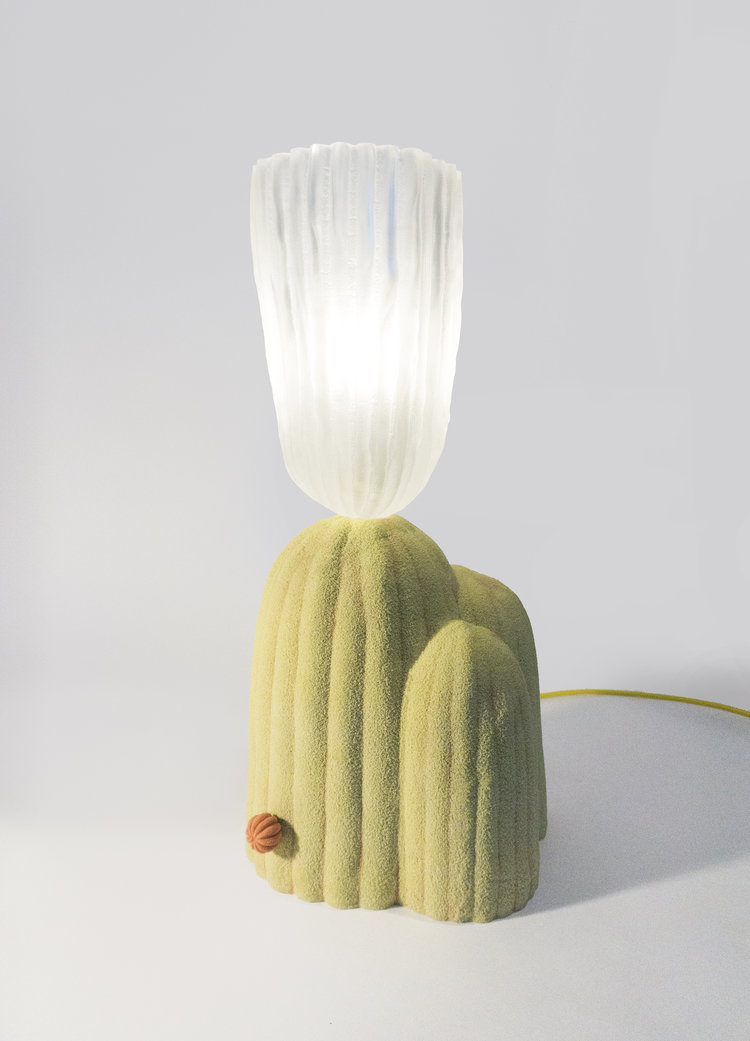 Deeper into the Golden Triangle space, past a jazzy DJ  and a glass icy mountainscape by David Winn, down the hall a continent of crystals come into view. The gems are cultivated by artist and licensed psychotherapist Sarah Raskey. She creates art that she hopes can change the audience’s perception of art—how it can galvanize transformative living and social awareness. Works aren’t simply put on display, they are arranged to create a functioning space. Around the corner, artist Steven Haulenbeek’s sculpture holds court. A two-foot tall sandcastle-cum-side table sits on a platform to expose its interior, which has been carved to look like a rippling ocean floor. Haulenbeek’s simplicity does not belie his talent, receiving worldwide acclaim for his  sand-cast resin furniture. 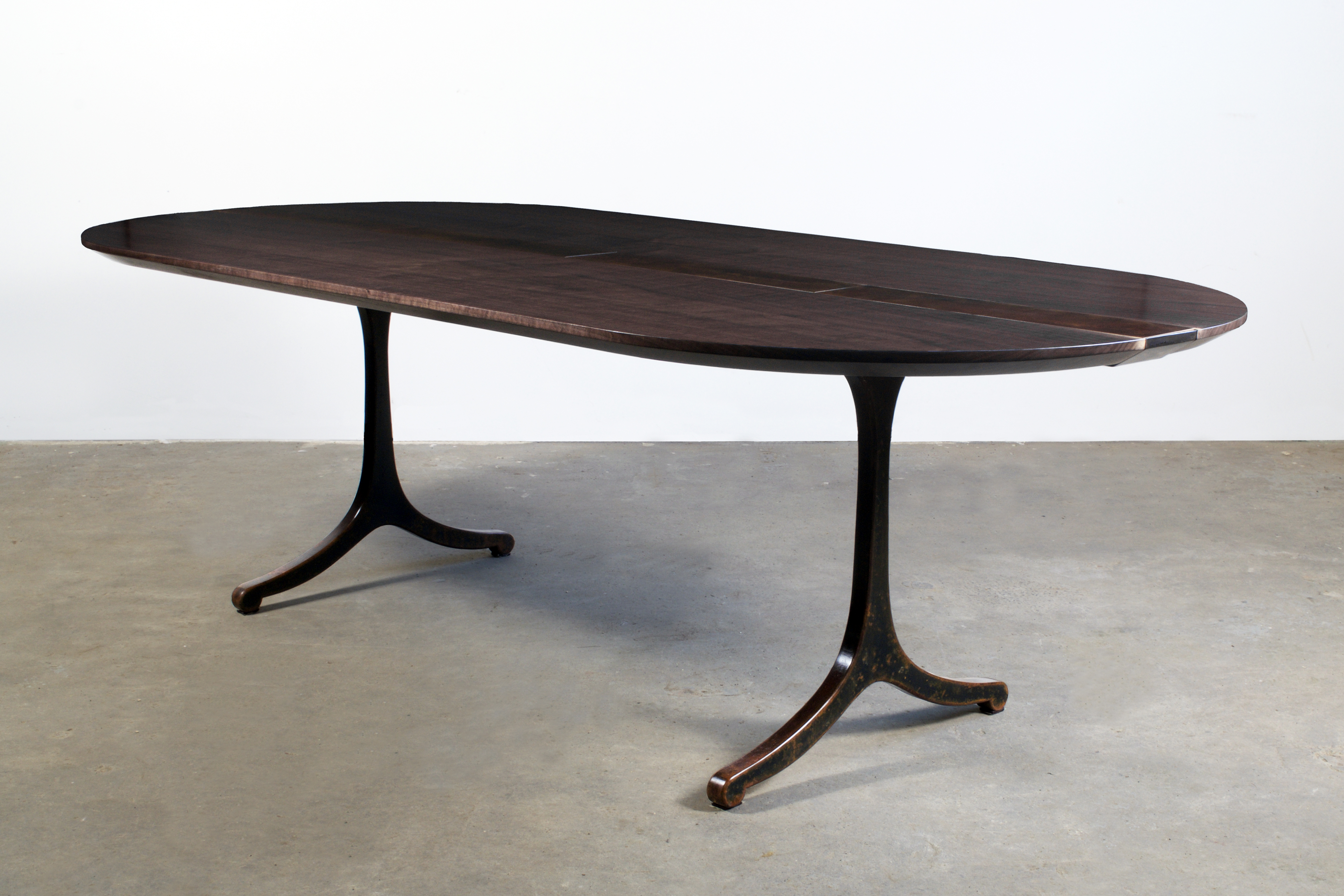 The most understated works of the Global Best are the most awe-inspiring—a rich, luscious handmade walnut table crafted by Jacob Wener of Modern Industry. The oval surface is cut down its length by removable steel panels, lacquered to blend with the table surface. The legs join like a dove’s tail, forming an elegantly squared post. Above Wener’s table hangs a beguiling light sculpture brilliantly soldered by Lucy Slivinski. Arched, rectangular shapes join together as they undulate the length of the table, taking on a burnt, red glow. 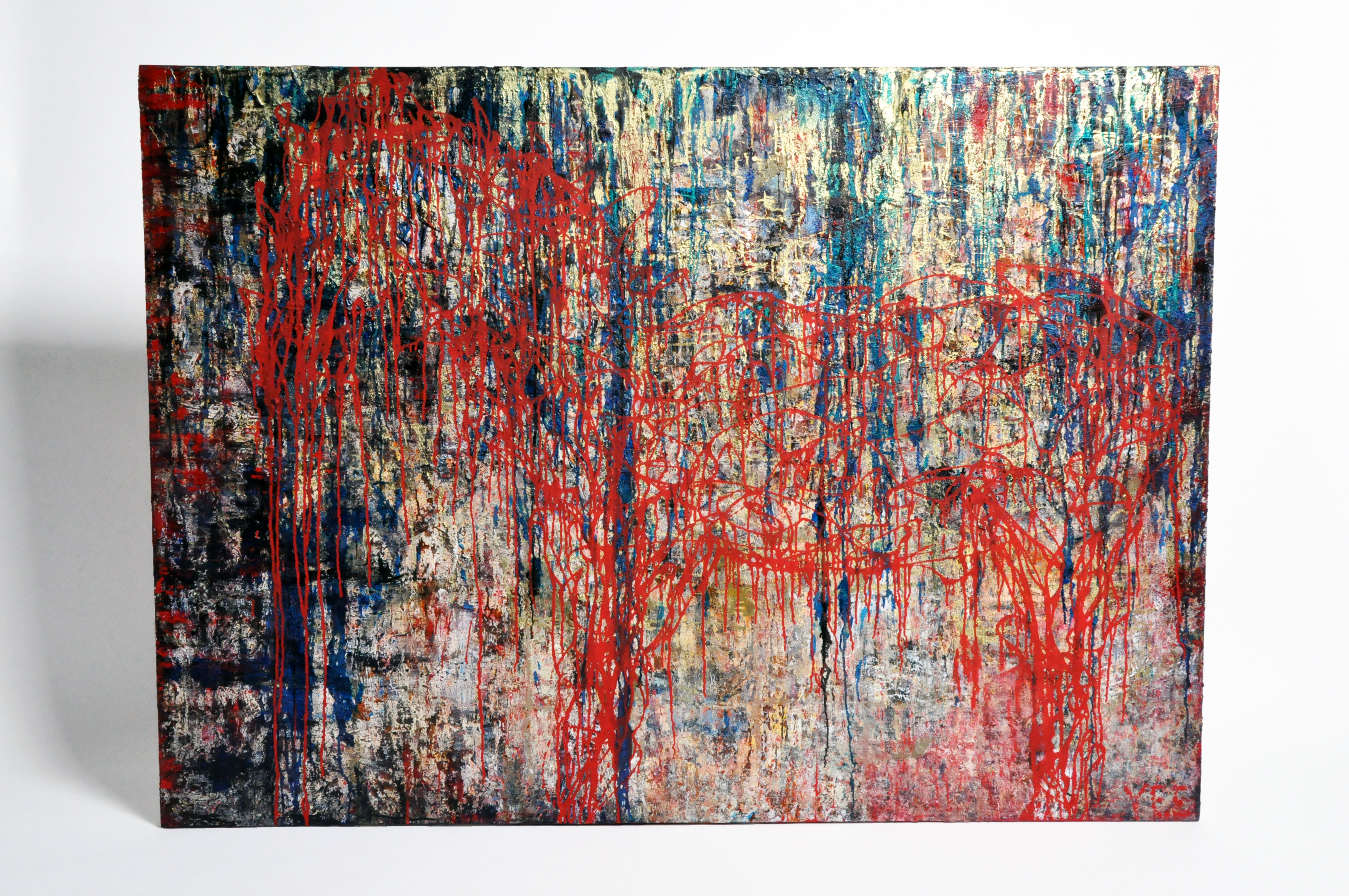 In the adjoining space, a soulful painting by Adam Siegel steals the attention of the room. The acrylic is a piercing ultramarine blue that looks like a chunk of lapis lazuli has been swept back and forth over the canvas. Nearby, Addison Xu, a recent graduate of Grand Central Atelier in New York City, is live painting. Trained in traditional portraiture and still life works, Xu captures the likeness of a nearby model, posed beneath a chandelier and gowned in a golden brocade gown. The fashion presentation was directed by Aldrin Del Carmen to celebrate Asian Pacific Heritage Month. 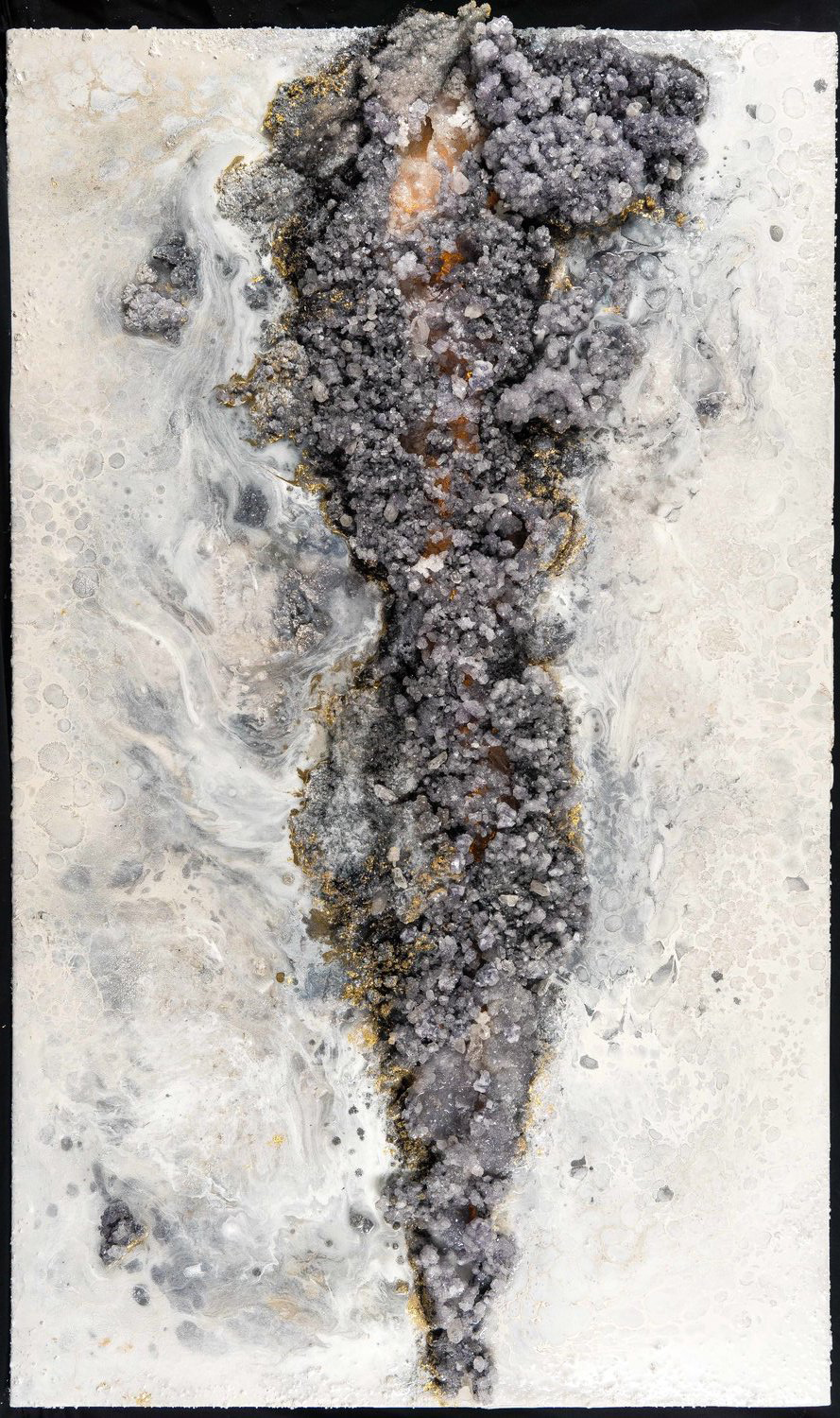 Last but not least are two realistic works. The first, by painter Andrew Ek, depicts a snapshot of a neighborhood, with tire marks burning into the distance as the moon hangs over a frozen hour. Ek views his pieces as visions that have been captured. Second is Laurel Feldman’s photograph, a large glazed print of a purple flower. The founder of her own decorative arts company, her attention to detail is remarkable. 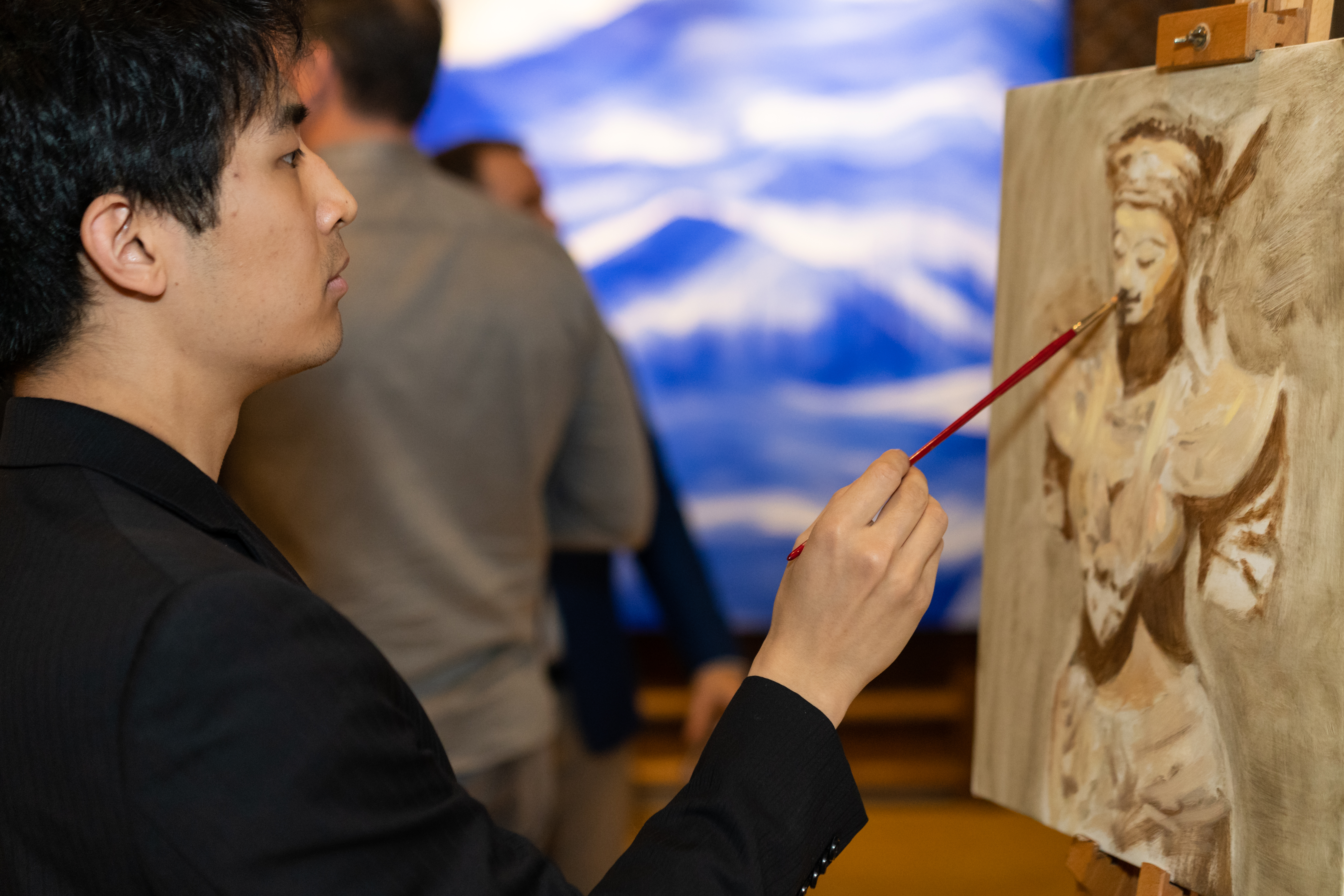