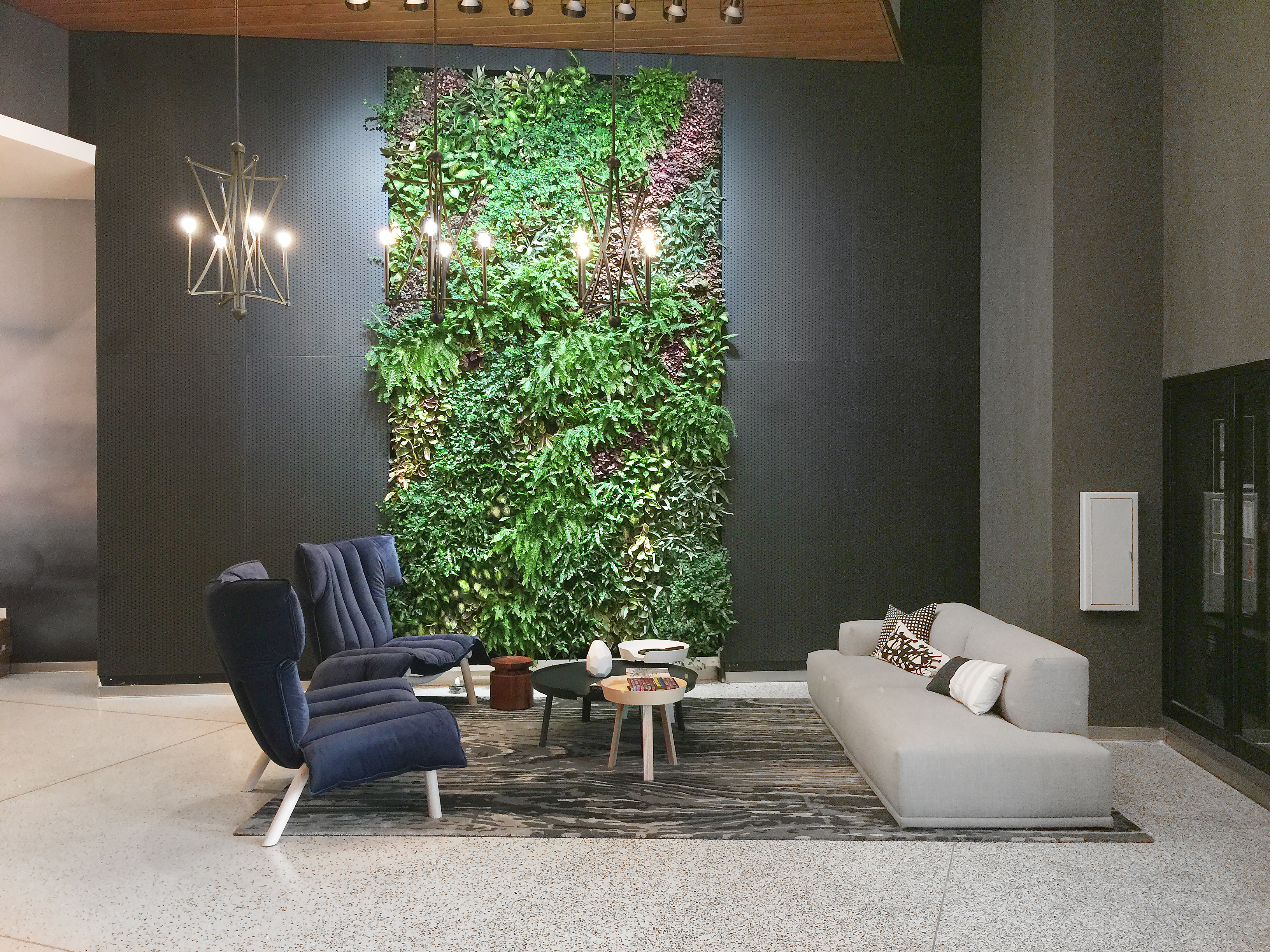 Whether it’s the lush swaths of chartreuse greens and deep purples that make up the living wall in Tishman Speyer or the intricate pattern outside the Advocate Illinois Masonic Medical Center, you’ve seen the work of biophilic design and lifestyle company Sagegreenlife. West Loop-based Sagegreenlife lead horticulturist and plant design manager Nathan Beckner comes by his eye for plant design by way of his grandmother, a talented rosarian, and a twenty-year background in fashion photography. Before he was carefully placing pallets of Philodendron cordatum against Dracena compacta, he was photographing celebrities like Jennifer Hudson.

When Beckner outgrew fashion photography, he turned to the roses that permeated his life and his fascination with horticulture blossomed into a career. From roses to living wall spaces, he’s traded Variegata di Bologna and Chapeau de Napoléon for Monstera Deliciosa, a plant the “Swiss cheese leaves” of which are famous in their own right. The goal isn’t simply to mimic nature, but to infuse it into all of his designs. “I had this passion and started building rooftop gardens with intricate irrigation and bamboo and getting more involved in the horticulture world and it became more than a passion,” Beckner says. “I followed that path and drive and studied what worked and what didn’t work with our harsher climate. The people here at Sage brought me on to design and I became part of the horticulture team and it was all very serendipitous.” 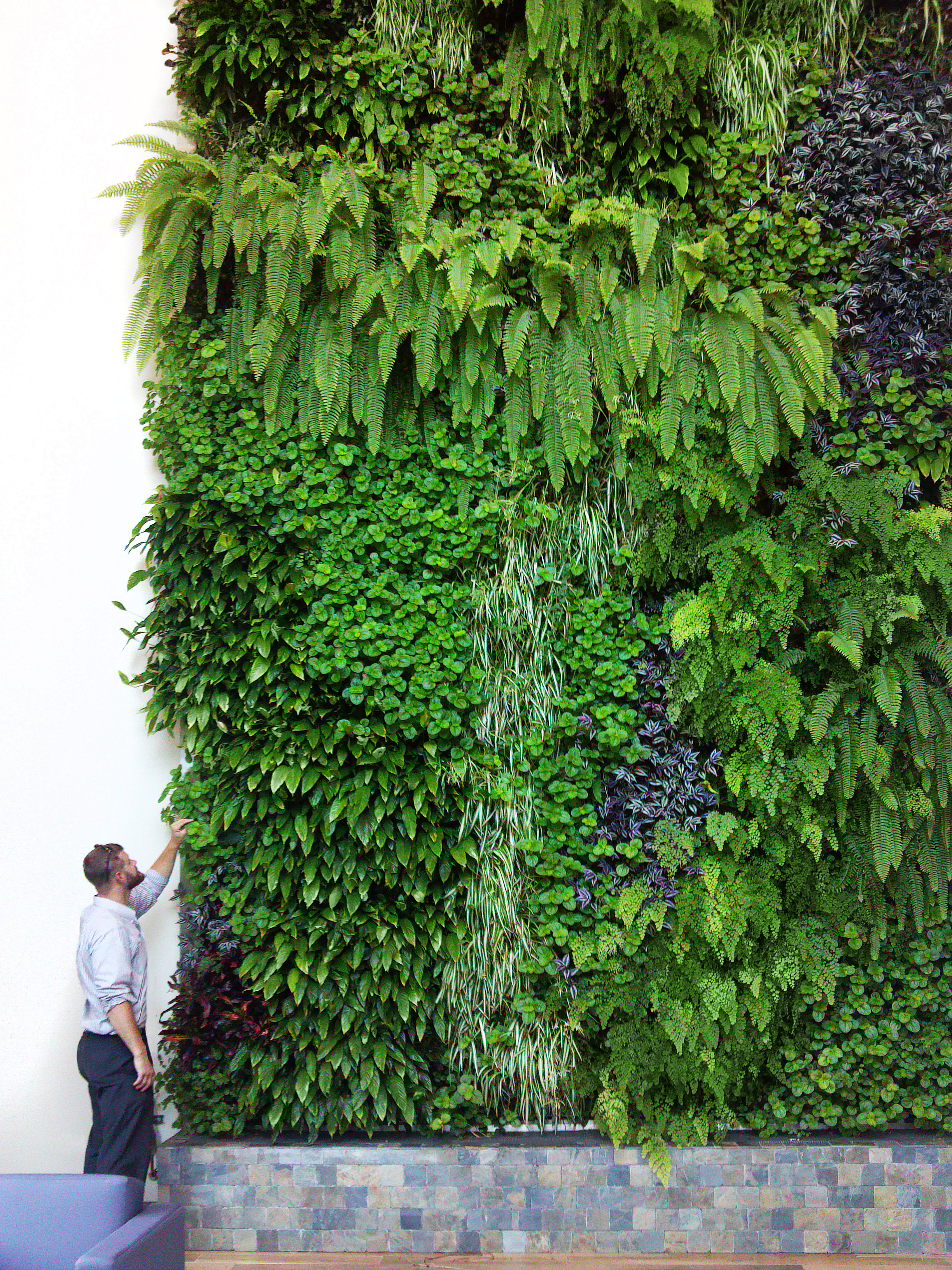 The Sagegreenlife office is as lush and comforting as a place that specializes in designing living walls should be. The open floor plan means everyone is chatting and sharing ideas with one another and, like they say at Sagegreenlife, it’s hard not to smile when you’re surrounded by plants all day. Especially during those harsh winters when you need a little green.

Varieties of their indoor and outdoor structures are placed throughout the office so potential clients can see what might work best in specific industries. Different plants thrive in different environments. Leading furniture manufacturer Steelcase has partnered with Sagegreenlife to rep the self-contained, freestanding walls and movable partitions. Among other considerations, the plants that fill them are chosen based upon client preference and durability. 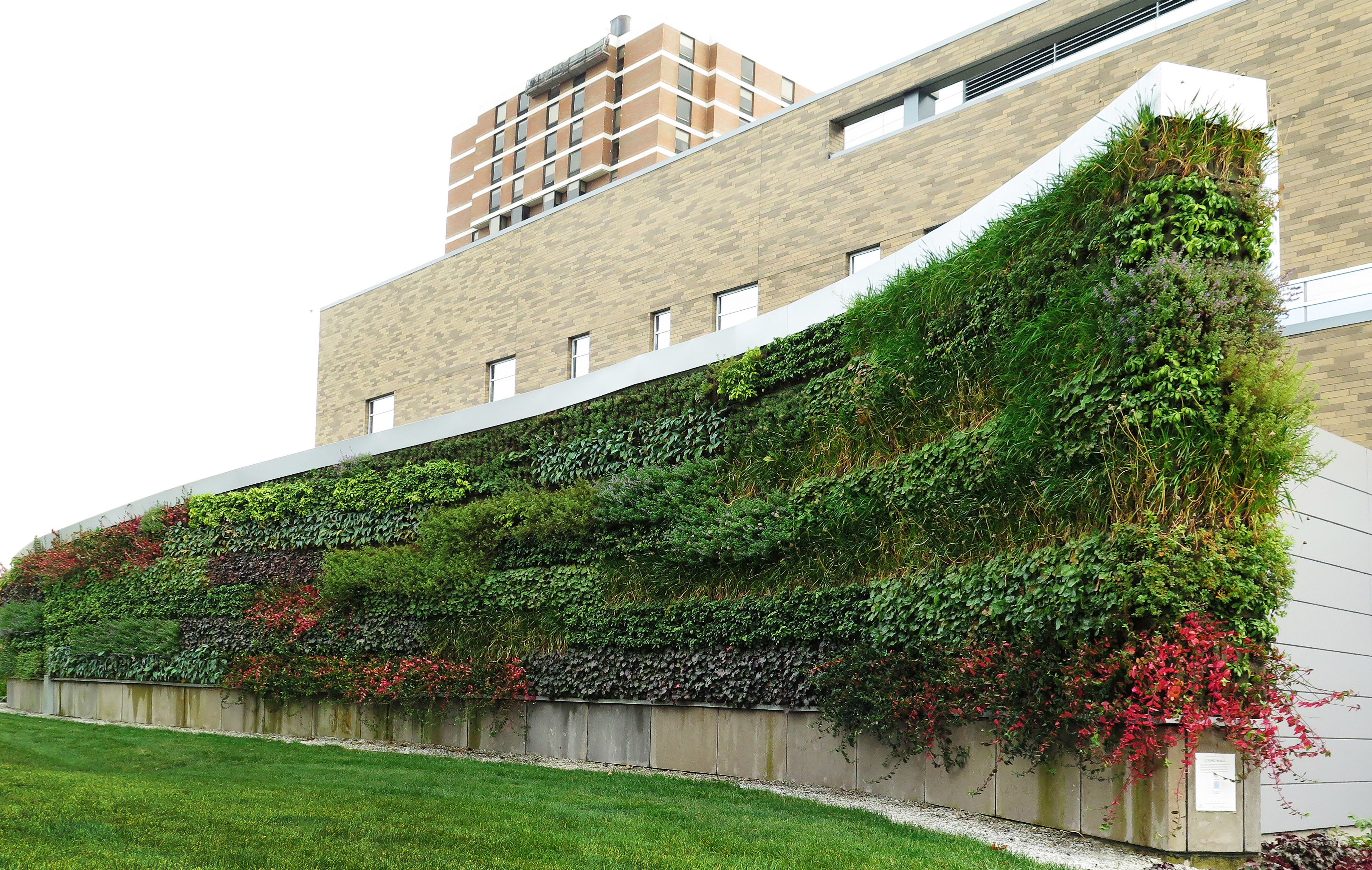 Horticulturists like Beckner know that Schefflera arboricola paired with Philodendron cordatum with variegation and bright chartreuse and neon leaves look better than a dark wall of green without variety. “The challenge was finding a plant that worked well in any space and was durable so with these I was able to get a look that was lush and dense in an office space where there are passersby or people running into things,” Beckner says. “Dark green varieties of plants can suck up a lot of light and look heavy, and I wanted to keep everything a little brighter but maintain that durability.”

Sagegreenlife takes all of the guesswork out of designing and maintaining a living wall by carefully plotting digital designs of the structures and filling them in with the ideal plant varieties. Maintenance is a breeze, thanks to technician teams that check on the walls every two weeks to replenish water reservoirs and take care of grooming. They also check and make any necessary adjustments on the special Kessil LED lights built into their ongoing plant-care program. 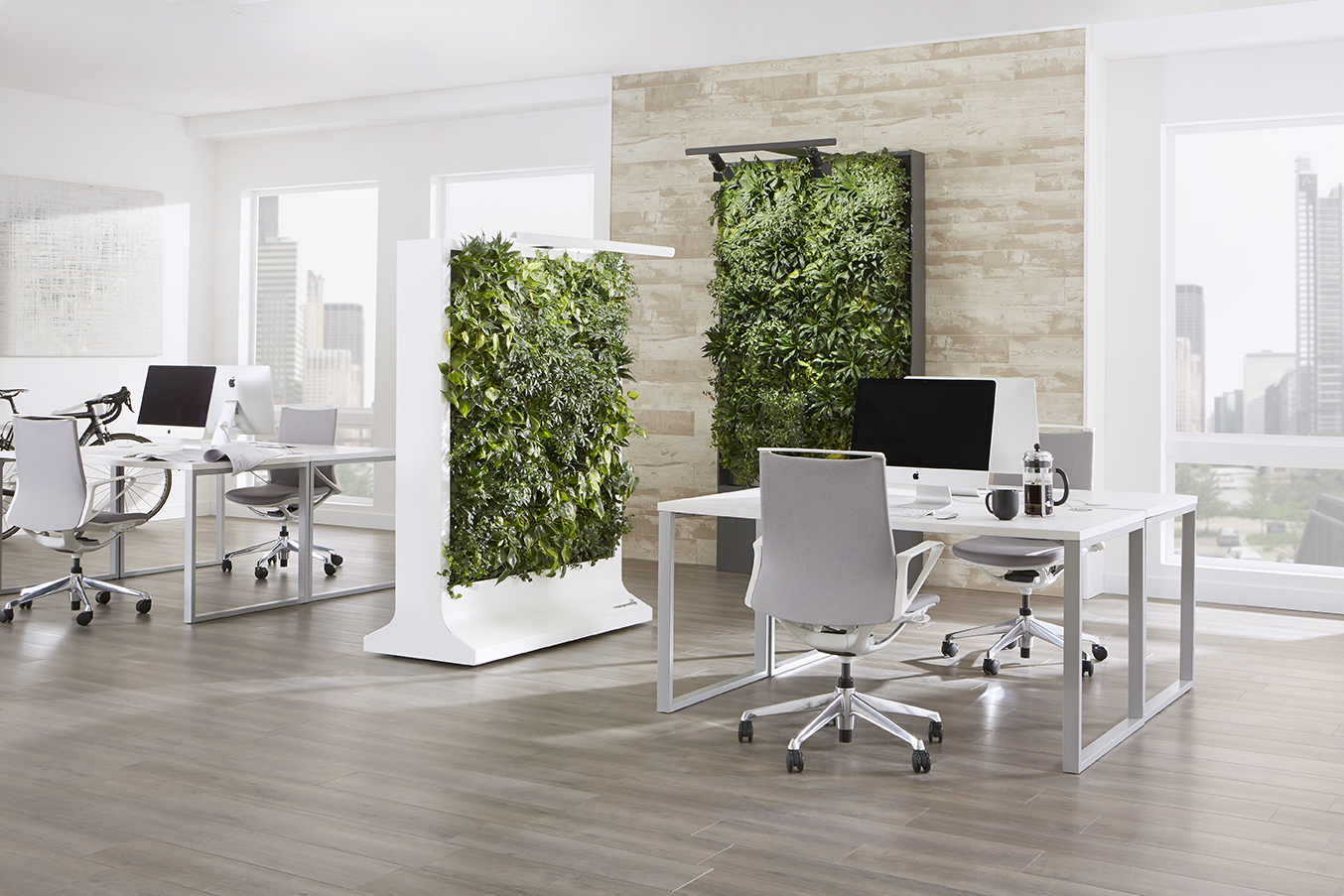 Their custom wall kits like those in their Verdanta Collection are portable and self-irrigating. They feature built-in LED grow lights and plug into the wall. The wall systems work, thanks to Biotiles that use a layered rock fiber, rockwool, which distributes water, oxygen and nutrients and doesn’t decay or break down over time. Because rockwool doesn’t degrade, it can be reused and recycled and won’t change size, regardless of being wet or dry, hot or cold. With control over water, oxygen, lighting and nutrients, plants and herbs like French lavender that would usually require sharp drainage can thrive in living wall systems that never become too wet or too saturated. Pelargonium (scented geranium) and Rosemary Prostratus, which is a trailing variety, survive and thrive in the living walls and don’t suffer the powdery mildew that can plague indoor herb gardens.

Of course, the walls aren’t just beautiful. They’re also good for you. Sagegreenlife studies show increased productivity and mental and physical health benefits from being around plants. “It’s not just about air purification, there’s a variable that isn’t quite understood about the way people interact with plants and biophilic movement that makes people healthier and happier,” Beckner says. “It changes your perception just being next to them and smelling the earthiness and feeling it. It’s a great thing.”

Sagegreenlife living walls can be seen in over twenty cities. Their goal isn’t to mimic nature but to infuse it naturally into all of their designs by incorporating natural elements into people’s lives and homes, just as nature intended.