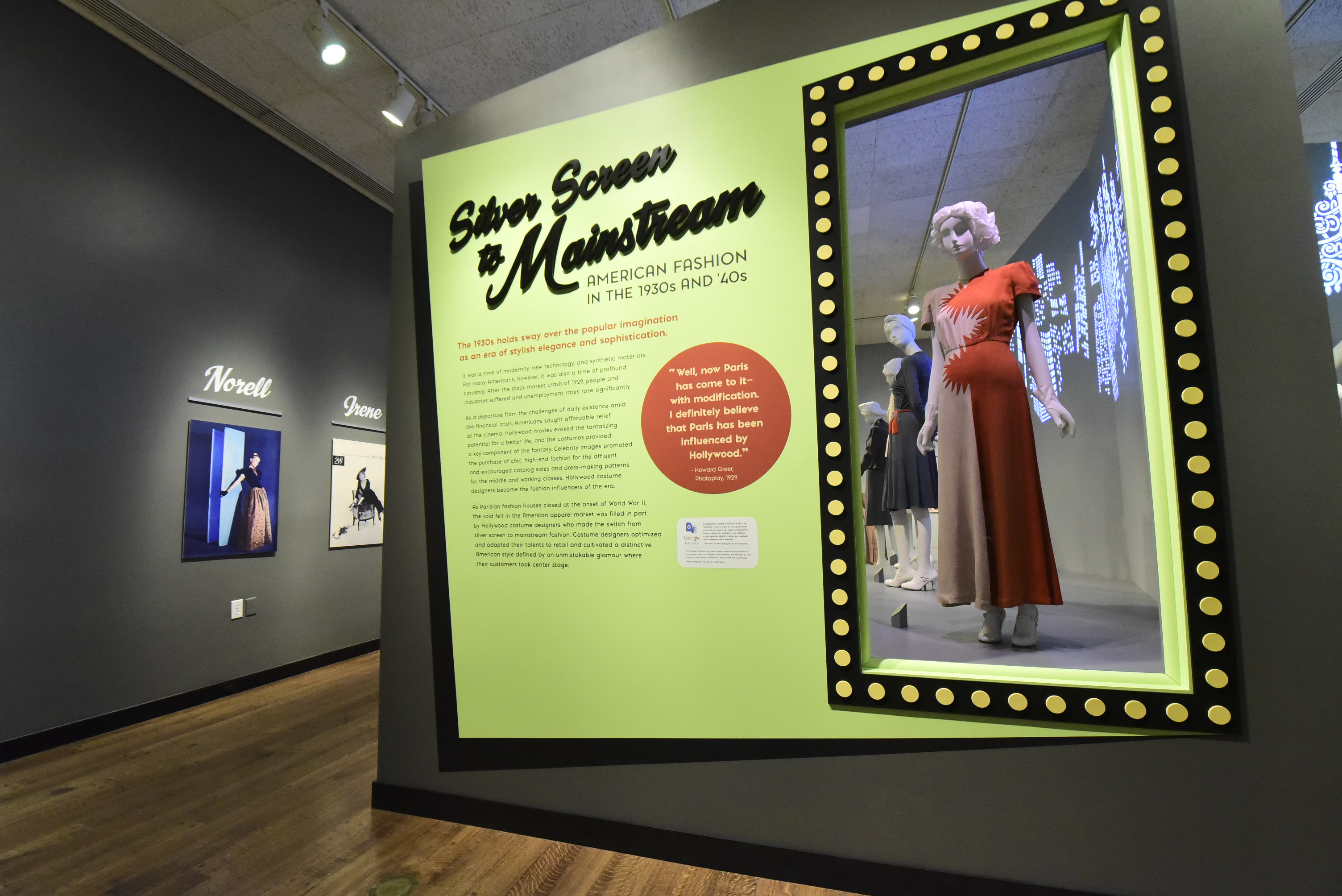 The Wall Street Crash of 1929 marked a dark time in our nation’s history. It kickstarted an economic crisis felt around the world that would last until the mid-1930s and be forever known as the Great Depression. It was a tough year, for sure. But from the ashes rose some of our nation’s proudest achievements. With unemployment rates rising and industry shortages across the market, fashion and style were the mothers of reinvention. It was the year that gave us the opening of the Museum of Modern Art (MoMA), “Makin’ Whoopee” by Eddie Cantor and “Ain’t Misbehavin’” by Fats Waller were hit records, and Hollywood stars like Greta Garbo and Joan Crawford attended the first-ever Academy Awards. The status associated with haute couture designs from Paris soon gave way to a demand for Hollywood-influenced costume design.

Virginia Heaven, guest curator and associate professor of fashion design at Columbia College Chicago, started by selecting over 300 pieces from an existing collection held by the Costume Council of the Chicago History Museum. The final exhibition, “Silver Screen to Mainstream: American Fashion in the 1930s and Forties,” includes garments worn by Chicago women from Parisian designers such as Gabrielle “Coco” Chanel, Madeleine Vionnet and Valentina, and Hollywood costume designers Adrian, Irene, Howard Greer and Omar Kiam. “I started thinking in terms of influences and what the time period was known for,” says Heaven. “Movies had a profound effect, and when I talked to a few colleagues, we all liked the idea, so then it became about how films influenced fashion in the thirties and forties—a profound time in our nation’s history.” 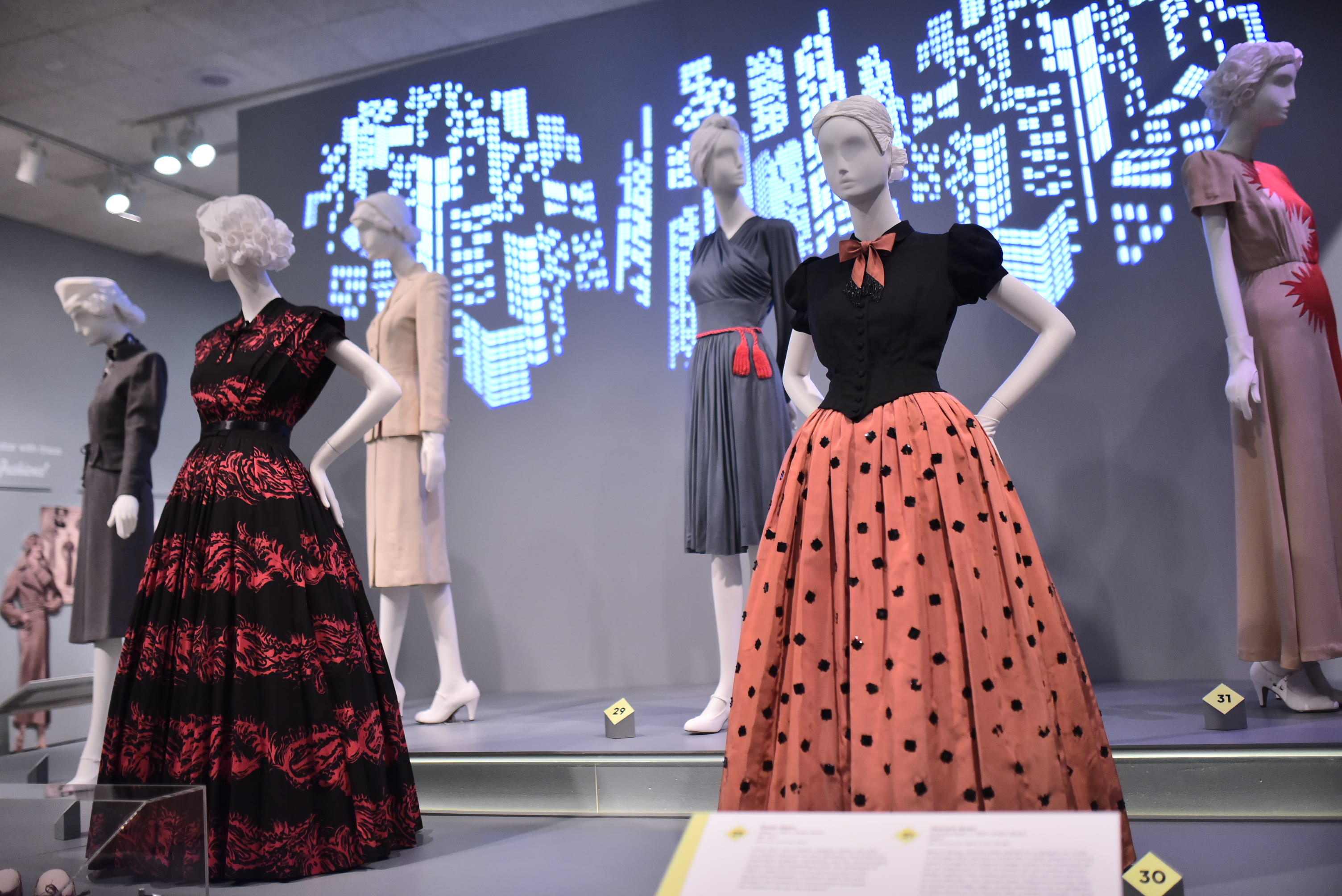 The exhibit opens with an absolute stunner, the crown jewel of the show. A Howard Greer Hollywood evening dress of scarlet and beige crêpe that closely resembles one he designed for Irene Dunne in “My Favorite Wife,” featuring a playful starburst design that snakes across the torso of the gown. Greer got his chops as a designer at Lucille in Chicago and after serving in World War I, he stayed in France where he began a costume-design career that would take him to Hollywood. This particular design is a prime example of silver screen to mainstream. A bit of Chicago history lines the walls leading up to a mini-movie theater showing a two-minute short on America’s economic decline and the public’s growing fascination with the movies. They were an escape, and according to the placard, “afforded a brief respite from hardship and the tantalizing chance to bathe in the flickering glow of good times.”

Some may have been able to afford fine fashions from overseas before the war and before the stock market fell, but Americans began to look to their favorite big-screen superstars for style inspiration. One of the exhibition’s photos shows a crowd of people leaving the Bronzeville Regal Theater in 1941, dressed to impress in fashionable hats and furs after a showing of the James Stewart and Katharine Hepburn film, “The Philadelphia Story.” Further along there’s a striking orange gown on display made of silk, an incredibly expensive material at the time, and designed by Sally K. Greenbaum. Greenbaum was a buyer and stylist in New York City before she opened an apparel store in Chicago in 1932. The sleek silhouette of the dress is reminiscent of many silver screen stars of the decade and displays the experimental combination of plastic and glass used to make the belt. Nearby, it’s impossible not to stop and admire the purple silk evening dress designed by Paul du Pont, a designer for stage, film and mainstream fashion. According to the exhibition, du Pont boasted an impressive high-profile clientele in Chicago including Mrs. Edward Byron Smith and the internationally renowned dancer Ruth Page. 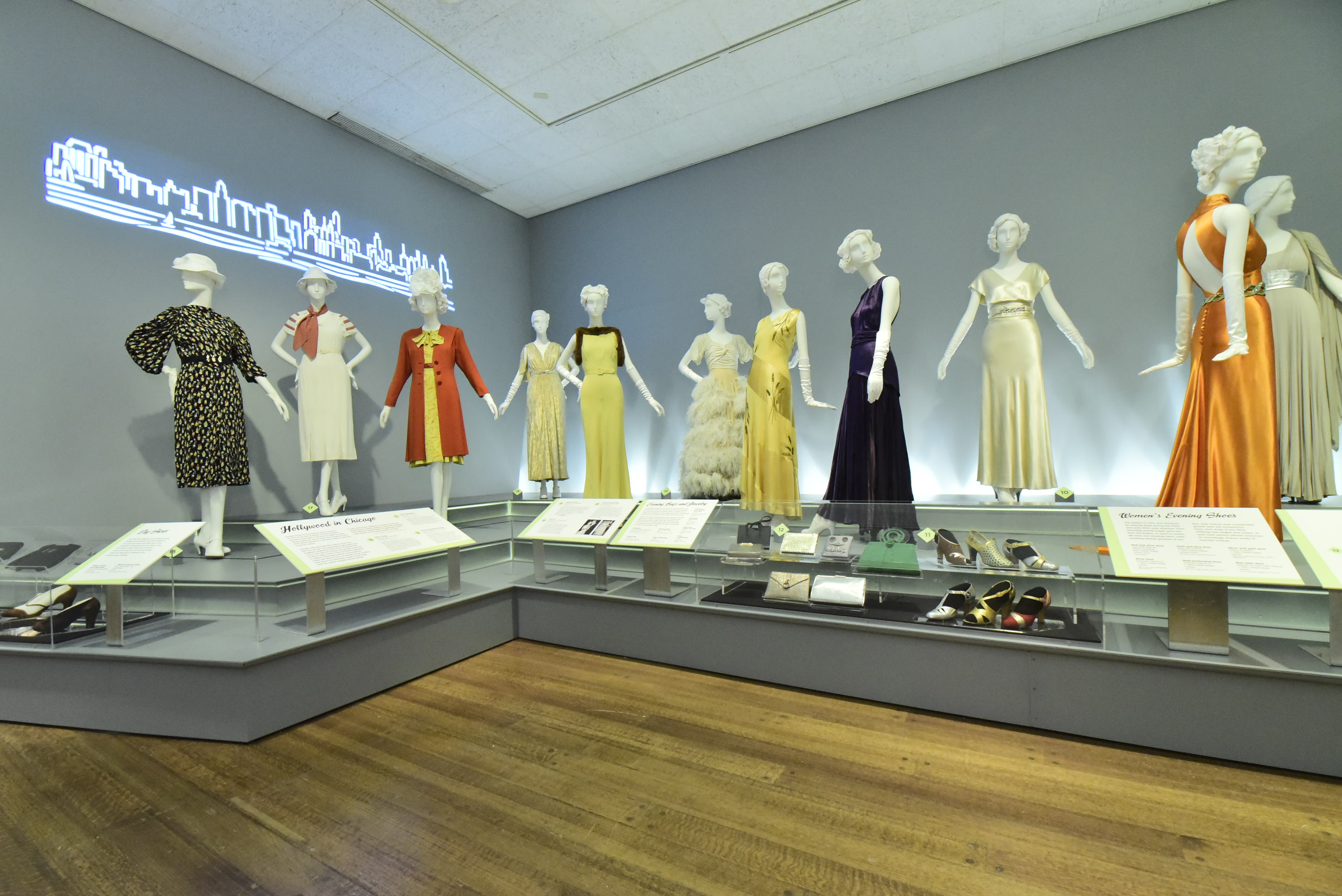 Other pieces from the collection included a tomato red and yellow matching dress and coat set of rayon, wool and leather and sold by Bernice Mottz Distinctive Clothes. Bernice Mottz established her custom dressmaking business in the Chicago suburb of Park Ridge and catered to middle-class women who wanted something fashionable and well-made. The intricate red bird and tree pattern on the mustard yellow dress looks like something you might see at a vintage boutique today.

Necessity is the mother of invention, of course, and women with very little money to spend still wanted to stand out. Not dissimilar to today’s thrifty shoppers, these women used what materials were available to them to make gowns and outfits that rivaled anything high-end designers could produce. Three dresses on display were listed as “maker unknown” and showcased the fine sewing and design skills of middle-class women who relied on department store patterns and a bit of creativity to create their own “silver screen to mainstream” pieces. 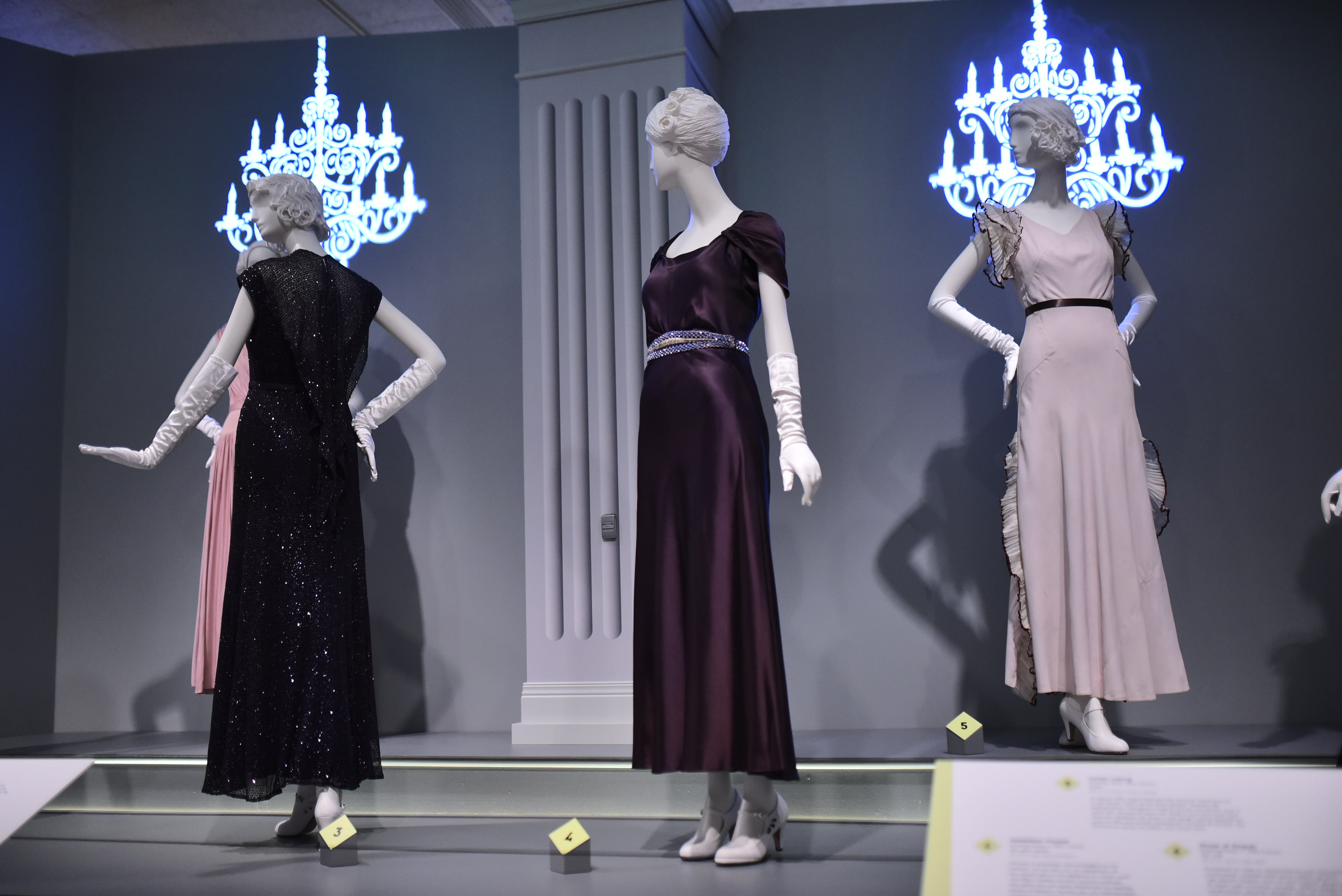 The final frock in the show is a must-see for its intricate details and beaded fringe bowtie that lines the neck of the dress. New York designer Norman Norell co-founded Traina-Norell and designed the rust and black gown featuring black and orange rayon faille, a high neck and narrow collar, short puffed sleeves, and buttons down the front. An advertisement for Norell featuring a model wearing the dress hangs on the opposite wall and adds a touch of surrealism.

“Most of the people who go through the show can see themselves in that style—it’s a classic style that was created in America for American women and the style established itself as a ready for anything, always prepared, beautifully put together look that has stayed the same since that time period,” says Heaven. “These designers created a recognizable style that’s lasted more than a hundred years.”

“Silver Screen to Mainstream: American Fashion in the 1930s and Forties,” Chicago History Museum through January 21, 2020.