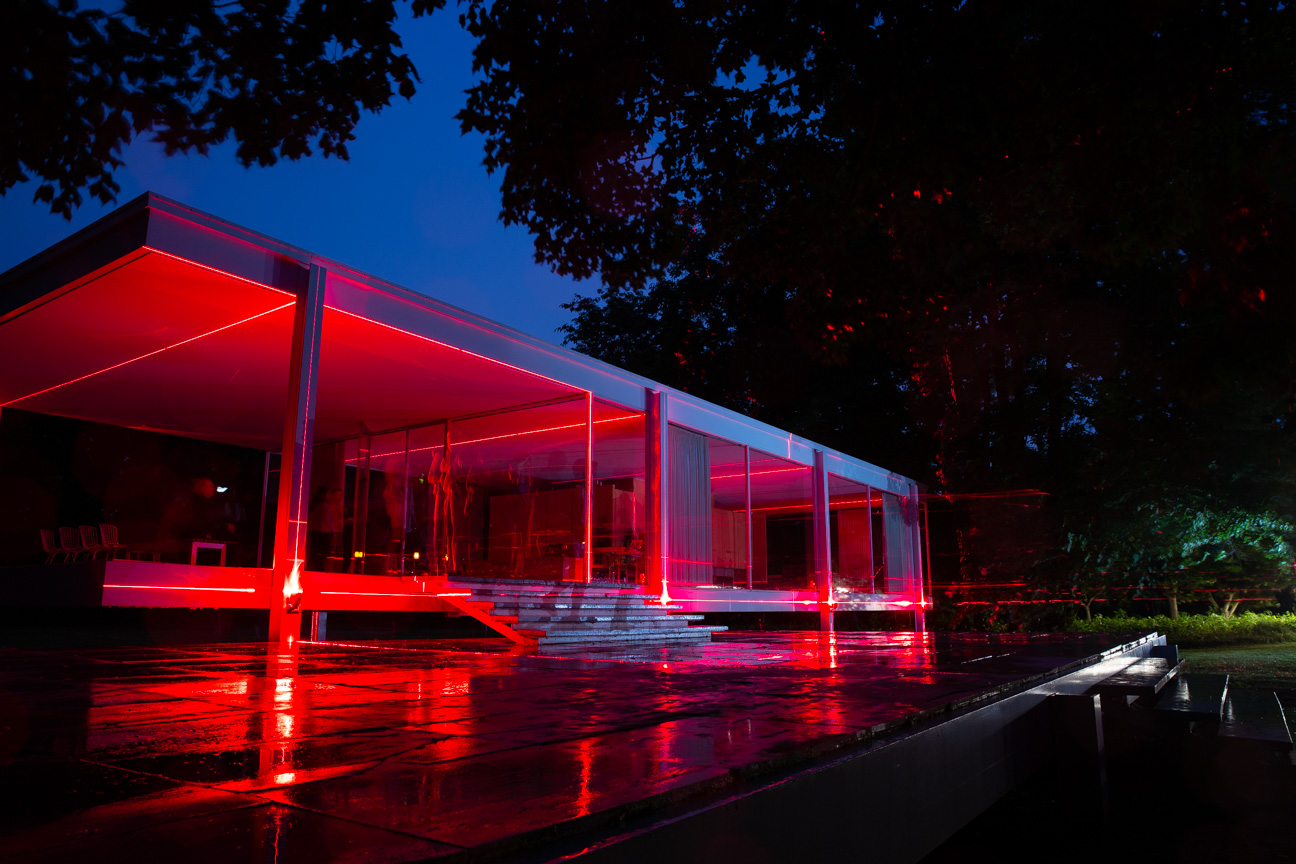 Even without lasers, the Farnsworth House is a significant physical and intellectual journey. With them, a visit becomes more of a spiritual pilgrimage. The iconic home—built by Ludwig Mies van der Rohe in 1951 and designated a National Historic Landmark in 2006—is nestled along the Fox River in Plano, Illinois, about sixty miles west of Chicago. For three nights this October, the structure will be clad with twenty-five bright red Bluetooth-controlled lasers, revealing previously invisible lines along the building, its terrace and the surrounding property. The light will react to a tonal reading made from the pitch of the space, played on speakers, further extending the invisible lines into both time and space.

The journey to the house is as important as the destination itself. It provides context. On this particular rainy drive to a preview of the intervention, an old friend and I eagerly anticipated a new experience. As we talk and drive away from the city, the buildings are smaller and further apart. Eventually, they almost cease to exist. We park, amble along a path of fresh mulch through a winding, rich green landscape, and then walk across a steel bridge over a flowing brook. 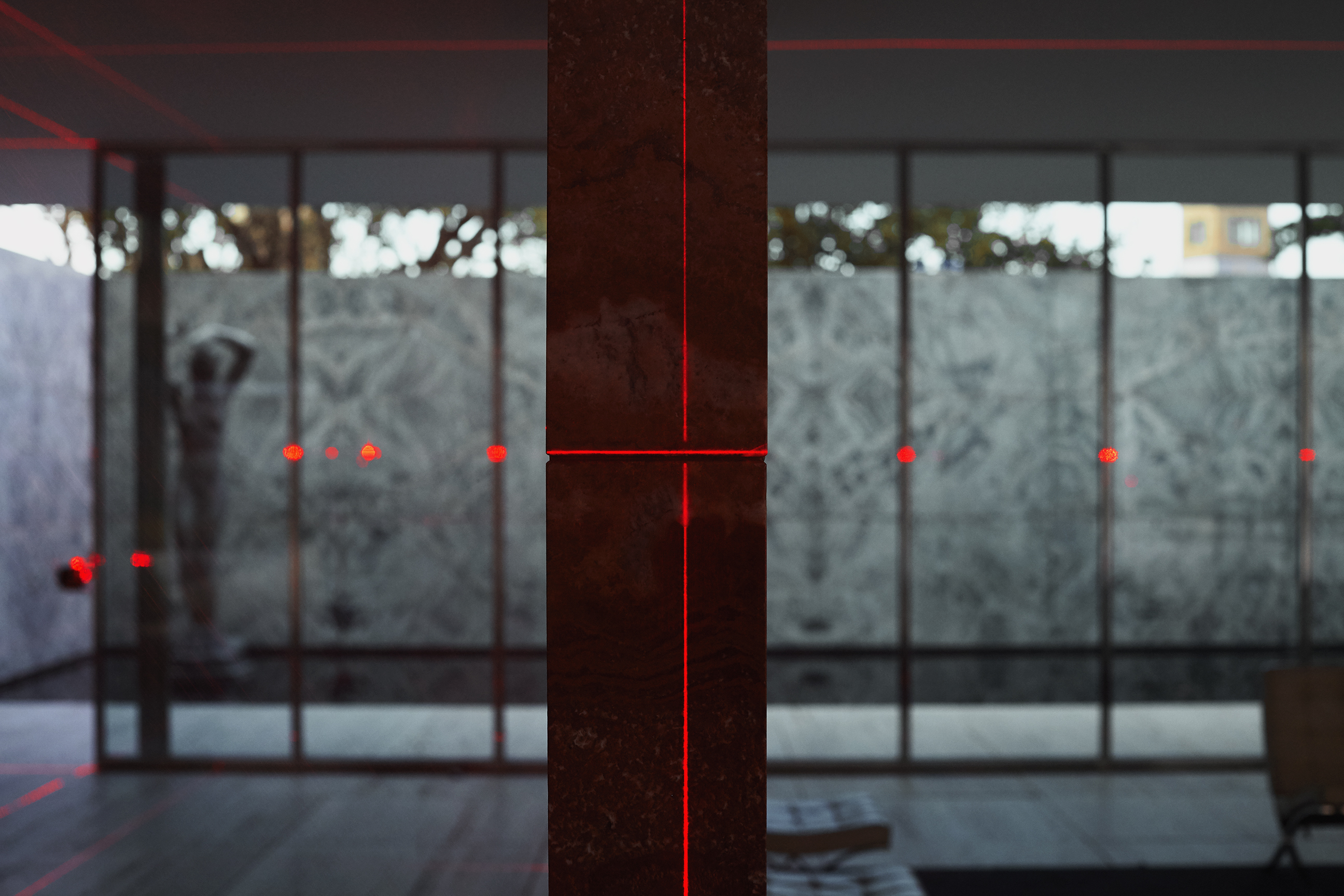 Paces later, Mies steps in. From a distance, the structure strikes as the pure essence of International Style, with every extraneous element removed. The elegance turns ethereal as I approach the house, and a bright red laser extends across my chest.

Geometry of Light is an intervention by the inimitable duo of Luftwerk and Iker Gil, with an accompanying audio experience by Oriol Tarragó. It takes place at, but also, on the historically significant home. The sound and light installation seeks to uncover the site’s forgotten history and lost landscape by revealing how the geometry of architecture relates to flood plains, topography and trees that no longer exist. The project premiered in February 2019 at the Barcelona Pavilion as part of the Fundació Mies van der Rohe’s ongoing program of artistic interventions. The light- and sound-based intervention at the Farnsworth House draws another invisible line, this time between two significant buildings. 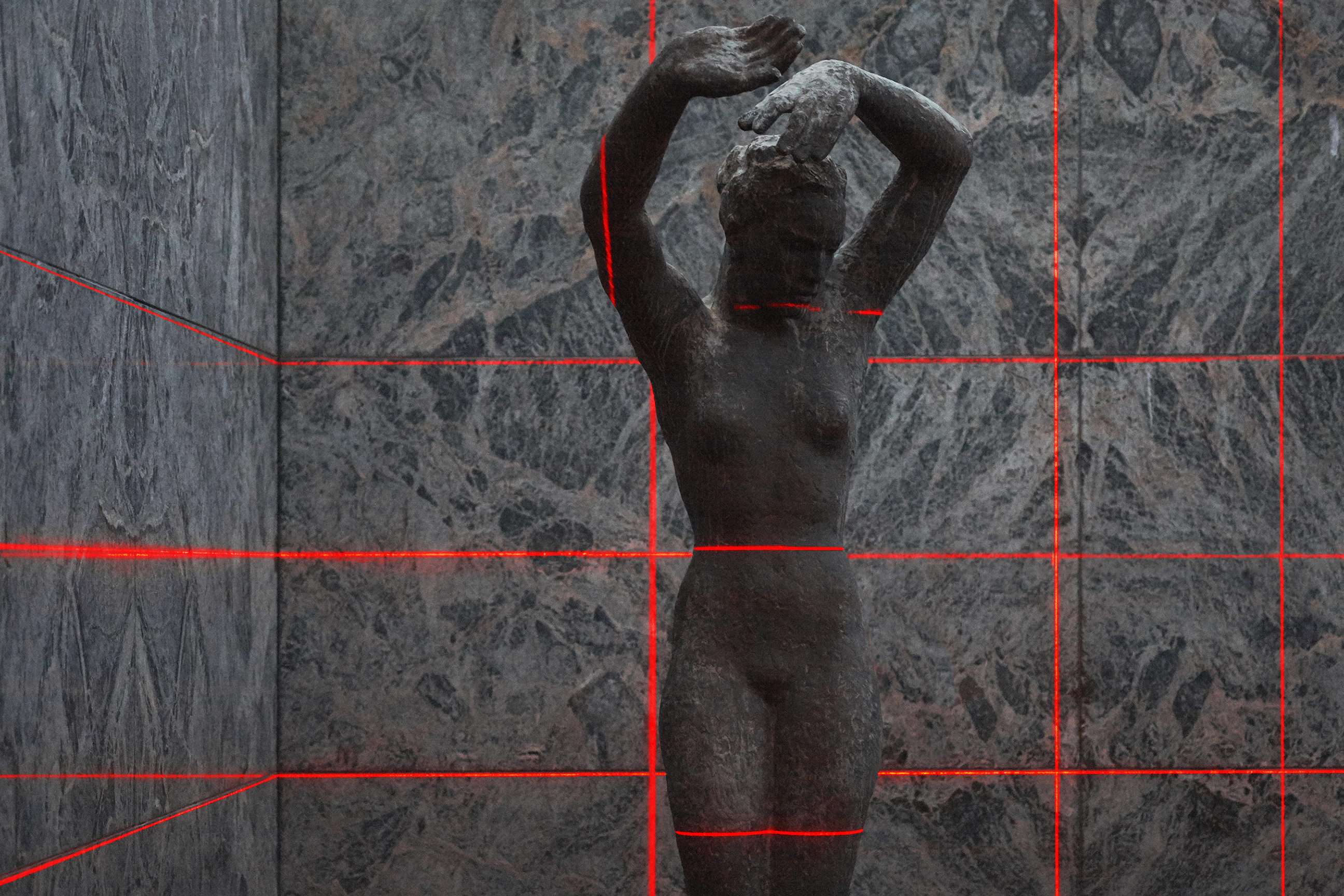 Mies thrived in the details, famously believing an architect should design form, structure and utilities holistically. For the Farnsworth House, he served as both architect and general contractor, which gave him complete control over the project. He used this privilege to create the most honest and minimal interpretation of his ideology I have seen. It is truly the ultimate refinement. The entire structure is composed of three strong, horizontal planes, which suspend glass walls between attenuated and widely-spaced steel columns. The one-story weekend retreat appears to float above the ground. Lasers infinitely extend the figurative space of the hovering planes onto the surrounding site, revealing how high the structure sits comparatively to the trees across the lawn. Under red light, the subtlety of the grid reminds me that this expression is merely a cross-section of a larger skyscraper. It is a piece of the puzzle. 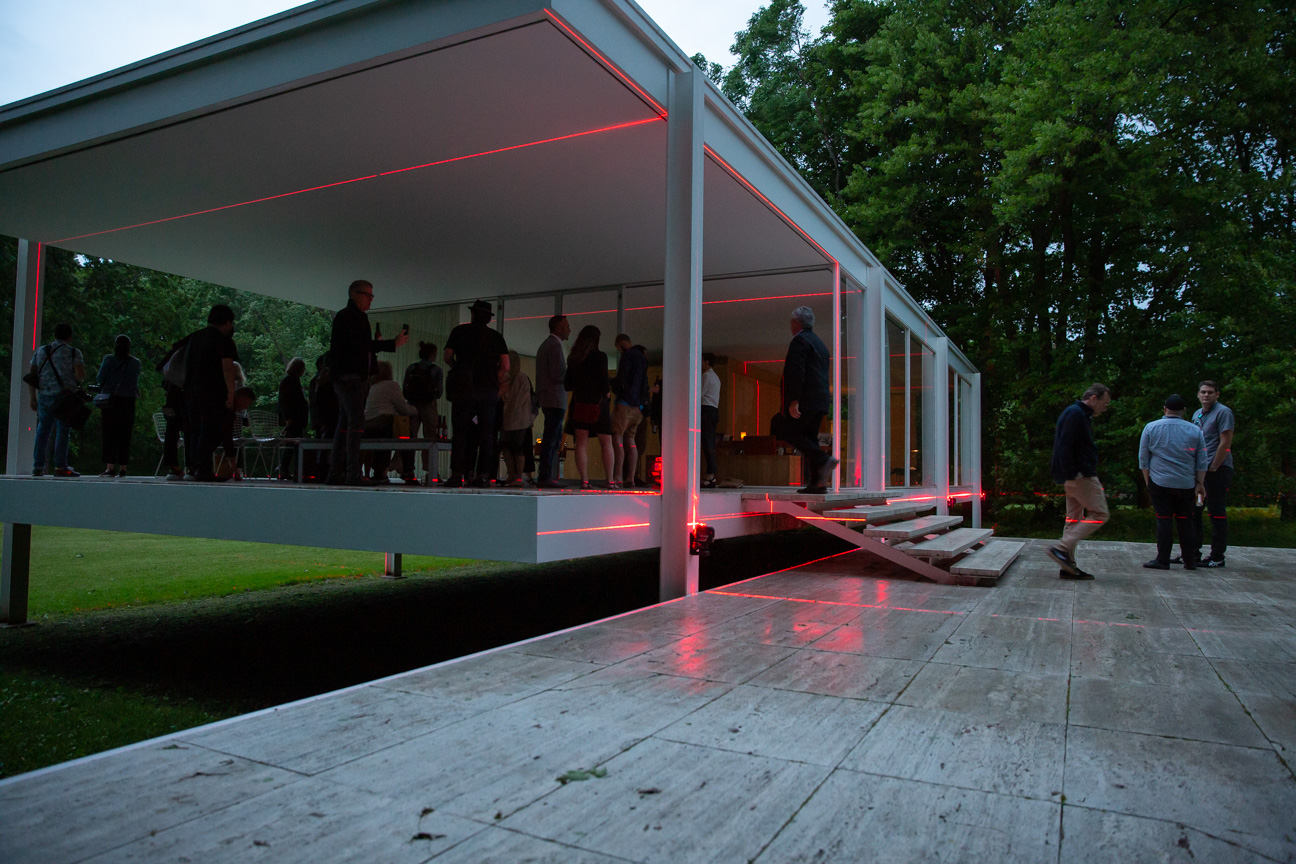 The project has more to do with creating an experience than it does architecture, sound or light. It asks the viewer to see Mies’ work in a fresh way. Standing on the lawn, I notice that one of the laser lines is bouncing up and down, clearly in contrast to the stability of the rest. Eventually, it is revealed that this particular laser is pointed to a five-foot elevation, representing and clarifying the highest flood line, which caused a great deal of damage to the estate. The laser is bouncing to reference running water inside the home. It draws a clear relationship between the house, its history and its landscape. Details like these are too often left between the lines, but headlining them now and again is important in an ever-changing environment. The point is subtle, but appreciated. This is all too fragile.