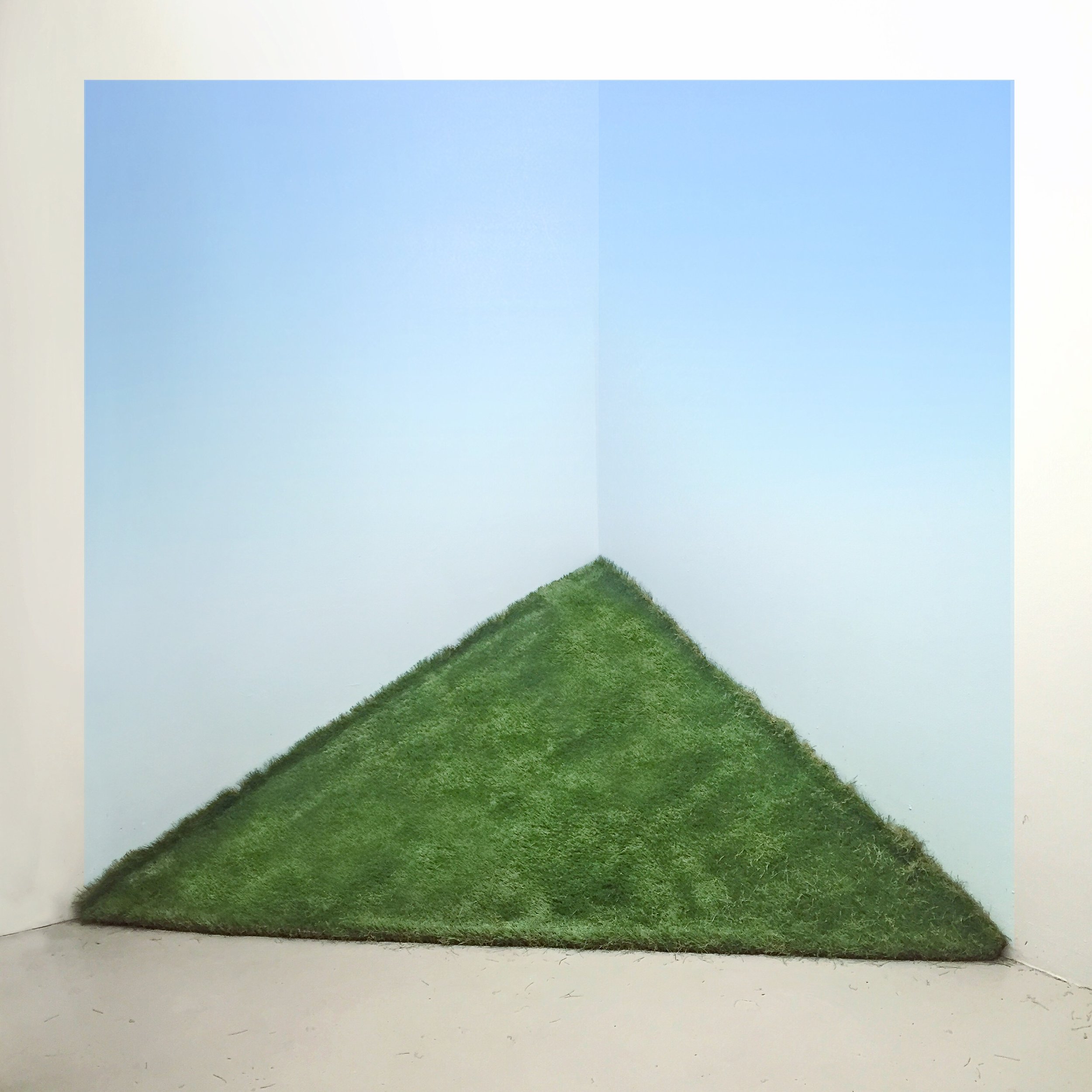 The enormous earthen mounds that constituted the Native American city of Cahokia between 1100 and 1200 A.D. were long thought to be the products of a culture other than Native Americans. Early U.S. explorers and archaeologists credited the Vikings, Welshmen, Hindus and Toltecs, thinking the Native Americans too primitive to be responsible for such sophisticated construction. Moreover, the Native American narrative, as recorded and disseminated by U.S. naturalist William Bartram, that the mounds had been built by “the ancients, many ages prior to their arrival and possessing of this country,” was repurposed as Manifest Destiny fuel. If the Native Americans were colonizers, then newly arrived Europeans had every right to be colonizers, too.

Since then, the mounds have been rightfully attributed to the Native Americans. It’s this history of misattribution and colonialism that self-described Indigenous Futurist Santiago X takes on in “New Cahokia,” V1 and V2. V2 consists of a trapezoidal prism, about eight feet tall, with window-like panels on all sides, onto which films are projected. In one, we see a Native American ritual fading into and out of pure electrical lines. In another, a huge, wide eyeball jolts from left to right, watching you, being watched.

As with much of Santiago X’s work, you can interpret it several ways, and each one makes sense. The eyeball looks alternately imprisoned in the prism and like the eye of Sauron—a symbol both of powerlessness and of power. The Native American ritual is prominent but unstable; it’s what we ought to be focusing on, but it dissolves before our eyes. Power and powerlessness, memory and its dissolution: the paradox of what should happen and what does happen existing in the same space. “My art is an exploration of my cultural identity,” Santiago X told the Santa Fe Reporter. “A reappropriation of misappropriation.”

Santiago X is an enrolled member of both the Coushatta Tribe of Louisiana (Koasati) and Indigenous Chamorro from the Island of Guam (Hacha’Maori). His work often deals with the ways Native American culture has been bastardized in the name of westward expansion. With compelling simplicity, “WANTED x CHRISTOPHER COLUMBUS” recasts the title figure as an outlaw. “Kill Mascots, Save the People” turns the Chicago Blackhawks logo into a symbol of murder, evoking colonial atrocities and the effect such capitalist whimsy has on cultural dignity. 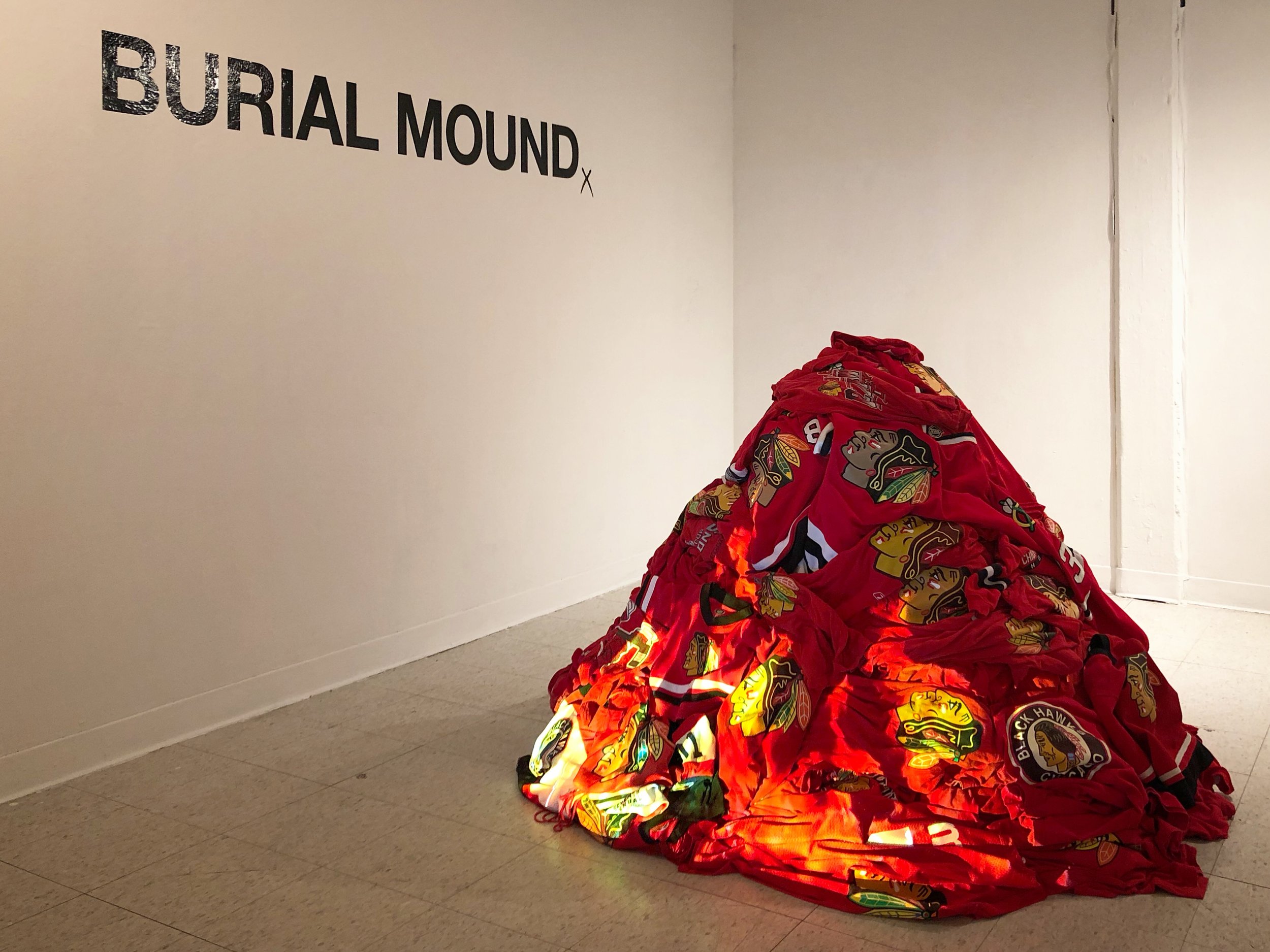 For the Chicago Architecture Biennial, Santiago X is partnering with the American Indian Center of Chicago and the Chicago Public Art Group in constructing an installation designed to “express a vision to construct Indigenous future-scapes,” according to Native Business. “Participating in this year’s Chicago Architecture Biennial is an incredible opportunity for me to contribute to the revitalization of Indigenous landscapes throughout Chicago,” he says.

Santiago X’s vision of the future of Indigenous legacies involves reasserting power, but remembering pain—grief must be processed in order to be overcome. It’s perhaps most powerfully depicted in his piece “Indigenous Survival Act 1,” a figure based on cigar-store Indians. Standing at soldierlike attention, the figure is carved to wear a gas mask that melds with its face. A gas mask is something you wear when you’re under immediate, existential threat. A soldier is someone fighting for a cause greater than themselves—if not always willfully. It’s a symbol of pain and resilience, a defaced caricature thrown into battle.