Installation view, “Weaving Beyond the Bauhaus,” 2019/Photo: The Art Institute of Chicago

Me Too and Time’s Up movements are transforming American culture. They’re part of a new universe in which considering the impact of the patriarchy on our civilization is more inescapable by the minute—requiring us to rethink every aspect of history and society. Which is why two shows at the Art Institute of Chicago (AIC)—“In a Cloud, in a Wall, in a Chair: Six Modernists in Mexico at Midcentury” and “Weaving Beyond The Bauhaus” are well-timed to spotlight the important role women played in the mainstreaming of modernism in postwar American design.

This phenomenon stands as an exception to the not-inaccurate presumption that women in design have faced obstacles as they did in every human endeavor. But there is a counter-narrative here, in which women—positioned in traditional gender roles as weavers and as decorators—acquired status as tastemakers and influencers.

It’s unclear whether AIC planned these shows to run concurrently, but the coincidence provides a chance to appreciate the virtues and resources of an encyclopedic art museum. While it’s nice that the Art Institute can host blockbuster traveling entertainments like the Andy Warhol retrospective, these AIC-curated shows illustrate why the minor departments of the institution are so important as generators of unique, illuminating content which provides a bellwether of prevailing societal norms.

In addition to the focus on the significance of women to the modern movement, “In a Cloud”—mounted by the museum’s department of Architecture and Design—makes us reconsider the position of Mexico as an important incubator of postwar modernist design. Specifically, it takes its impetus from an exhibition at Mexico City’s Palacio de Bellas Artes in 1952, “Art in Daily Life: Well-Designed Objects Made in Mexico,” that featured the work of, among others, the six designers presented in this show.

Of these six women, most—with the notable exception of Anni Albers—would be unfamiliar to all but the most serious design wonk. The most fortuitous discovery for me was the work of Clara Porset, a Cuban-born multitalented industrial designer who assembled the 1952 show. She organized that exhibition to advance her idea that “there is design in everything” and, reflecting the clear influence of the Bauhaus, that good design invariably improves the quality of life and moves society forward. The Art Institute displays several pieces of what Porset called “our own kind of furniture” that, while designed in the 1950s, look so contemporary you would not be surprised to find items like them today at DWR or CB2.

Probably the most visually exciting materials in the show are the colorful rug designs of Cynthia Sargent, an American artist who, with her husband Wendell Riggs, manufactured rugs and textiles in Mexico City under the Riggs-Sargent label beginning in the 1960s. One of the most intriguing aspects of the “In A Cloud” show is the obvious cross-pollination of ideas among designers; the work of these women was often used in the major works of Mexico’s most important architects—specifically at the Camino Real, a lavish hotel in Mexico City designed by architect Ricardo Legorreta, who made extensive use of textiles of the American weaver Sheila Hicks, who now works in Paris but was based in Mexico during the 1950s and 1960s. Perhaps not coincidentally, Hicks’ work appears in both the Mexican design show and in “Weaving Beyond The Bauhaus” in the AIC’s newly renovated textile department galleries. 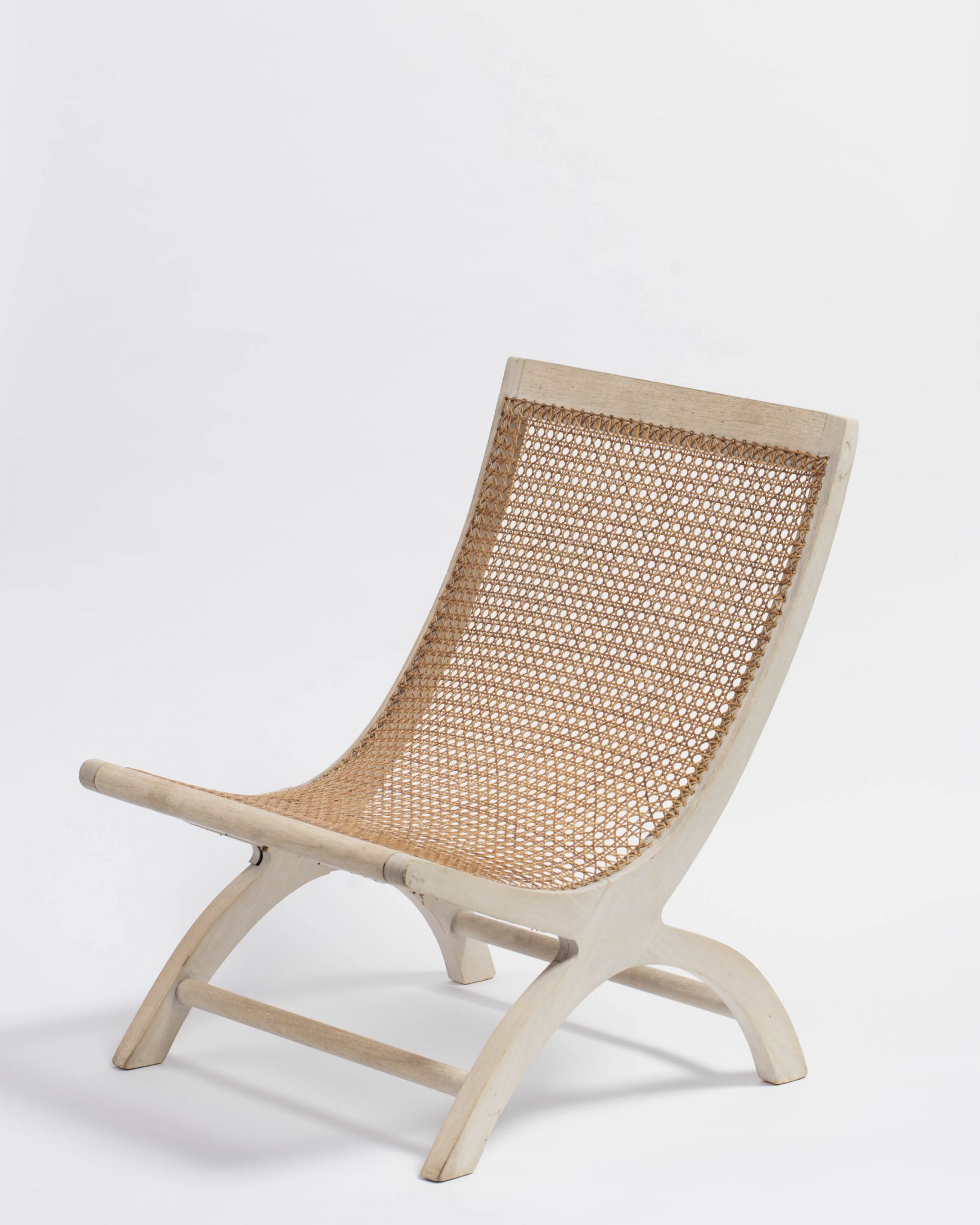 Similarly, since Anni Albers is probably the most celebrated textile designer of the twentieth century, it’s no surprise to find that Porset included her work in the 1952 “Art In Daily Life” exhibition and that it’s featured prominently at “In A Cloud.” And of course her work is central to the “Weaving Beyond The Bauhaus” show. Albers, who was the only woman to chair a department at the Bauhaus school in Dessau, played a monumental role in promoting innovation and artistry in postwar textile design.

The post-Bauhaus weaving exhibition offers an interesting counterpoint to the Mexican design show, in both its curatorial grounding and visual presentation. It’s hard to visit any of the A&D department’s shows without having a major learning experience, and “In A Cloud” is typical of what to expect from the department: a straightforward presentation of drawings, photographs and objects generously augmented with detailed informative materials—all evidencing the impeccable scholarship reflected in the lavishly illustrated catalog accompanying the show. 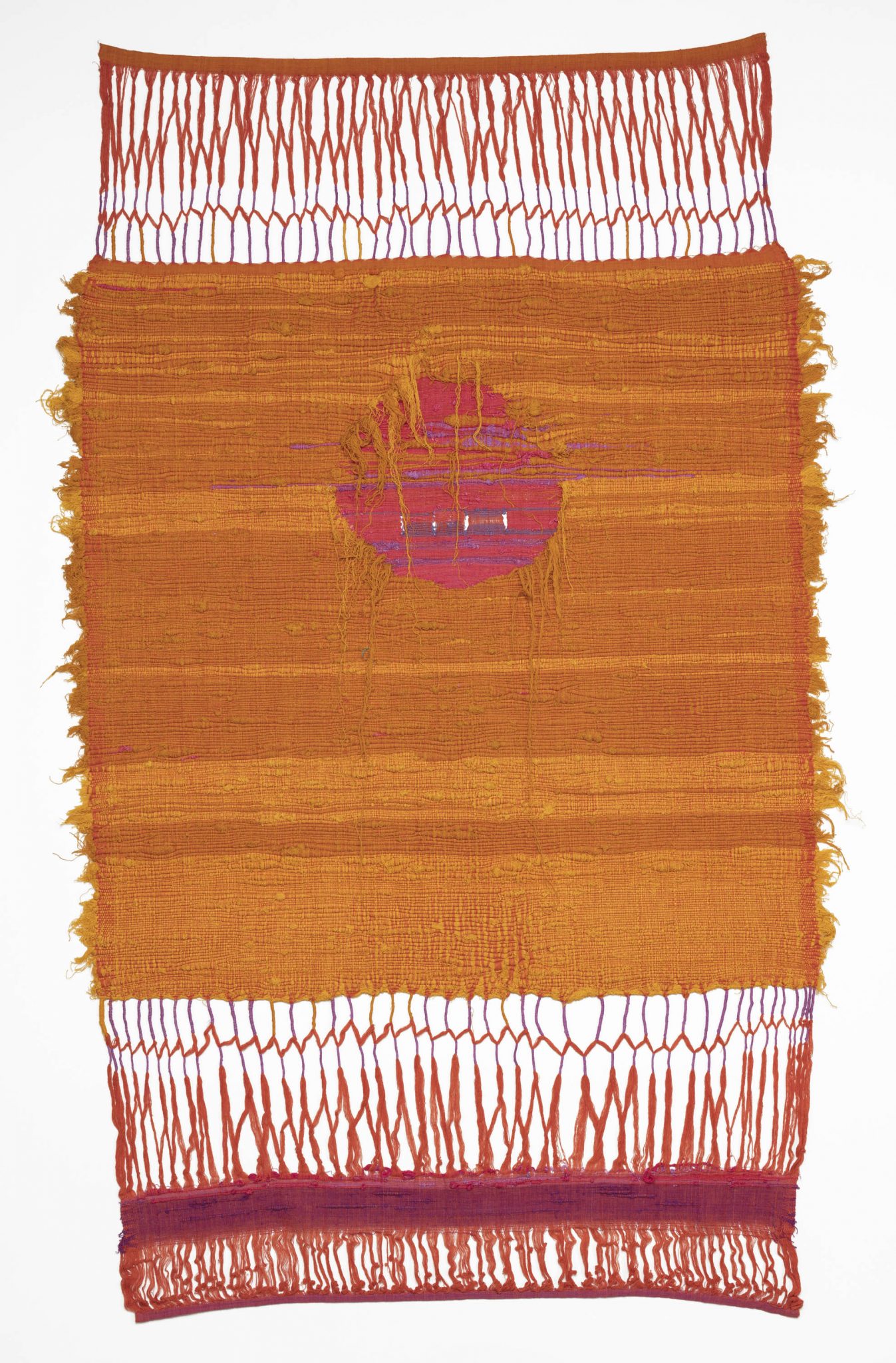 “Learning to Weave in Taxco, Mexico,” about 1960. The Art Institute of Chicago, gift of Martha Bennett King in memory of her brother, Dr. Wendell Clark Bennett. © Sheila Hicks.

“Weaving Beyond the Bauhaus,” in the museum’s newly remodeled textiles gallery, while equally instructive, reflects a different approach to presentation that in some ways requires viewers to connect the dots on their own. While there is some curatorial wall text as part of the gallery installation, it directly tells us the organizers have chosen to limit their overview of the materials and instead have used the artist’s own words to explain their works.

Despite the absence of spoon-feeding, it’s not difficult to draw conclusions simply from the chronological manner in which the weavings are presented. The clear message is that Anni Albers and the artists whose work is featured, all but one of whom are women, fully embraced the Bauhaus spirit of innovation and free expression—to see themselves as useful artists in the world of machines and mass production.

Installation view of “Weaving Beyond the Bauhaus,” 2019/Image: courtesy The Art Institute of Chicago

And while there is a scarce amount of what we might consider didactic materials, what the curators offer is easy to absorb and to draw your own conclusions. Particularly helpful is a kind of org chart of the artists whose work appears in the show and the institutions where they worked and their interrelationships; we see a similar cross-pollination evidenced in the mid-century Mexico show. We discover that Anni Albers fled Germany to chair the textiles department at the progressive art institution Black Mountain College; her Bauhaus associate Marli Ehrman founded the textiles program at the Chicago’s Institute of Design, which was founded as the “New Bauhaus” in 1937.

But it’s in its visual execution that the Weaving show distinguishes itself. The “In A Cloud” show presents itself in a fairly conventional, unsurprising fashion; there’s a lot of monochromatic material and a lot of text. Despite its small size, “Weaving Beyond The Bauhaus” offers far more in terms of the sheer pleasure in experiencing richly textured works of art at close range. This is particularly true of the galleries containing powerful yet contemplative installations of works by artists who worked later in the twentieth century while embracing post-Bauhaus ideals: Lenore Tawney, Yvonne Pacanovsky Bobrowicz and significantly, Chicago’s own Claire Zeisler—who studied with Albers at Black Mountain College and with Ehlers at the Institute of Design and whose powerful “Private Affair I” the museum is displaying for the first time in twenty-five years. It alone makes a trip to the Art Institute worthwhile, but there’s so much more. Plus, of course, there’s the Warhol show.

“In a Cloud, in a Wall, in a Chair: Six Modernists in Mexico at Midcentury” is at the Art Institute through January 12, 2020. “Weaving Beyond The Bauhaus” through February 16, 2020.