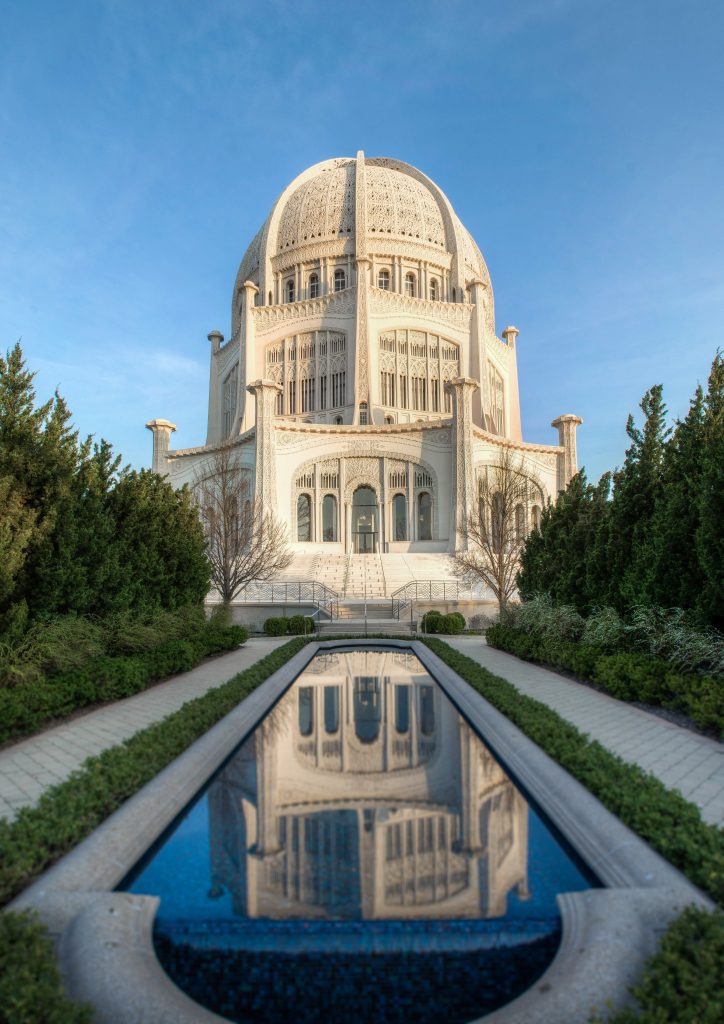 The Bahá’í House of Worship

Everyone knows about the Sears Tower and the John Hancock Center, but who has put the flashy architecture of the Loop to one side and given proper attention to Niles’ Leaning Tower of Pisa replica? Or Uptown’s “Statue of Death,” in the eyes of which you can supposedly see your own inevitable demise? On your next socially distant walk or drive, consider wandering by these Chicago-area gems.

This 1966 public housing project was one of architect Bertrand Goldberg’s stellar sequels to his much-lauded Marina City building complex. Comprised of a community building and four curved residential towers—two at sixteen stories each and two at twenty-two stories each—in Goldberg’s signature corncob-like structure, Hilliard Homes was the Chicago Housing Authority’s last and most successful high-rise project.

Goldberg hoped to create a welcoming, distinctive structure that would offer a novel approach to low-income housing by carefully considering the holistic needs of the community that would inhabit it. Though the complex underwent an extensive renovation, renaming and repositioning as a mixed-income apartment complex almost fifteen years ago, Hilliard remains a spectacular piece of architecture as well as an important marker in Chicago’s socio-political history.

Stone was scarce in mid-nineteenth-century Chicago, while Wisconsin lumber was abundant and viewed as a safe, clean and quiet paving option. Consequently, there was a time when most Chicago streets were laid with wooden blocks. The Wooden Alley between Astor and State, which runs behind the Archbishop of Chicago’s home, was built in 1909 and is one of the city’s last wooden streets. It was restored in 2011 with Pennsylvanian black locust wood and remains a nice stroll.

The monument atop the final resting place of Dexter Graves is a particularly popular Graceland Cemetery destination. Known as “Eternal Silence” or “The Statue of Death,” legend has it that by staring into the figure’s eyes one can visualize one’s own death. Some visitors have also claimed that the statue’s arm is higher or lower depending on the time of day.

Alhough there are more than five million practicing Bahá’ís internationally, only ten Houses of Worship exist. Completed in 1953, Wilmette’s House of Worship is the largest and oldest of the ten, and the only one in North America. The structure includes Islamic, Gothic and Renaissance architectural styles, reflecting the faith’s universalist principles.

One of the Seven Wonders of Illinois, the House of Worship took forty-one years to complete. Nine gardens surround the ornate central building, which was carefully cast in concrete by fifth-generation stone carver John Joseph Earley. Using the wealth of experience passed down through his family, Earley used a material often criticized as unfriendly to create a warm, almost glowing structure that is worth a day trip.

The Leaning Tower of Pisa is a long way away with flights are few and far between; consider spending a pleasant afternoon with your local edition instead. Built in 1934 to conceal a large outdoor water tank, the Leaning Tower of Niles stands at ninety-four feet tall—half the size of the original—and features a 7.4-foot tilt. Following a period of disrepair, a 1991 sister city pact with Pisa, Italy, ensures the icon’s ongoing upkeep. The Tower will soon feature seven bells, brought together as part of a $1 million restoration.

The United States’ first planned industrial town, Pullman was designed to house the staff of the Pullman Palace Car Company. Built between 1880 and 1884 on 4,000 acres, the town of 8,000 employees and dependents was once entirely company-owned and featured Victorian-style homes, a library, a church, and shopping and entertainment destinations.

After mass layoffs and wage reductions that led to a two-month strike in 1894, the Illinois Supreme Court ordered the Company to sell its residential holdings. Now one of Chicago’s seventy-seven official neighborhoods, most of the homes of the original town remain intact, acting as both contemporary housing and living icons of a national labor history.