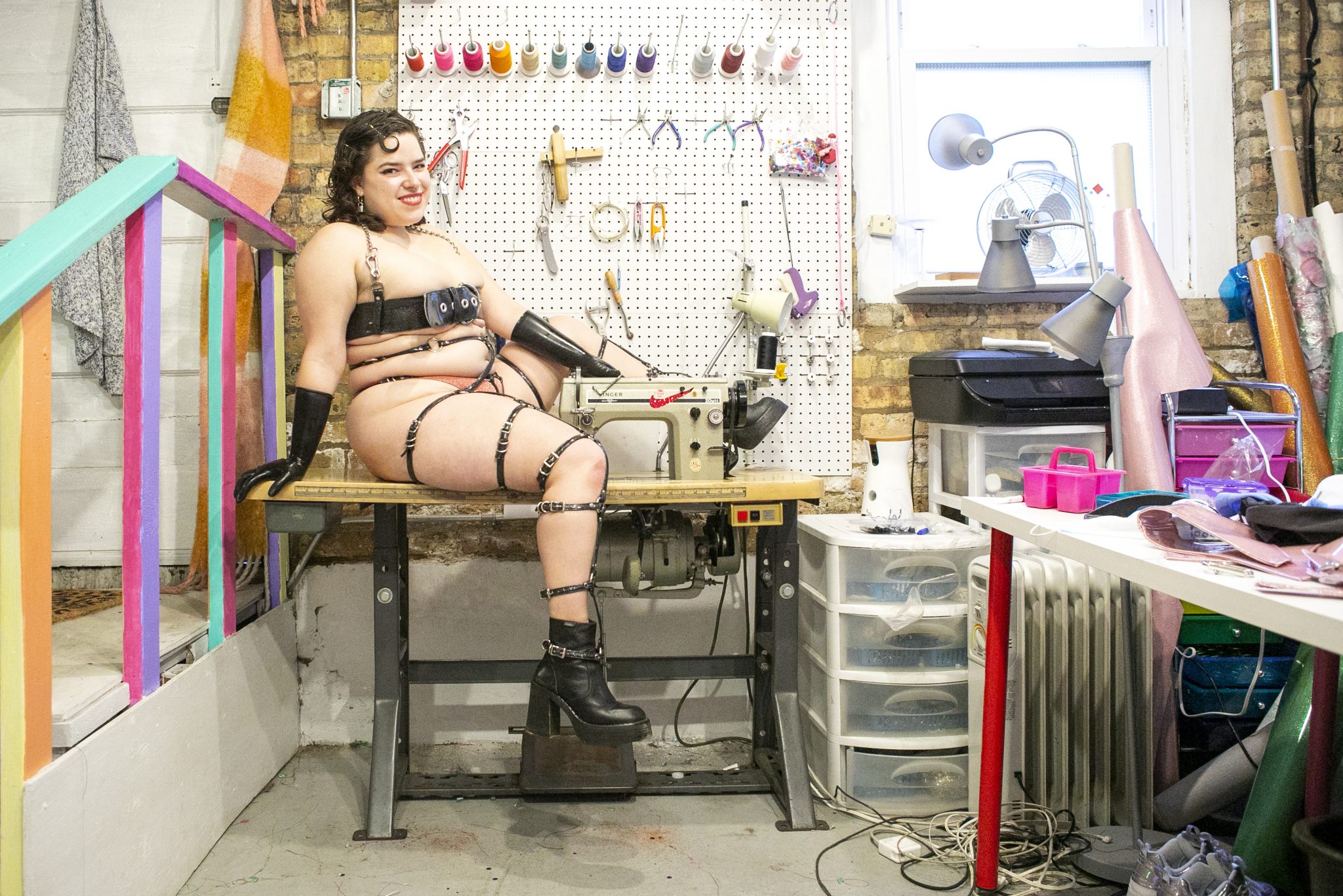 I can only see Gnat Rosa Madrid’s eyes over the rim of her protective mask but they light up when she shows me a gift from her parents—a Virgen de Guadalupe decoupage to put in her brand new studio space in Rogers Park. She tells me how the oval nimbus surrounding the Virgen is like a vulva, the cloak she wears like labia.

“I’m Mexican-American and some people are like, ‘Oh, it’s so interesting that your family is Mexican Catholic and you make kink-wear,’ and it’s like have you seen Mexican art?” says Gnat. “When I was in Mexico City with my partner Chris, we were looking at all the art and it’s just like what I make but different, one even had the same sequins I use glued around the Virgen, so it’s pretty obvious where I get my inspiration.”

Gnat started her business selling glittery vinyl and plastic bondage gear in 2012, a year before graduating with her BFA from the School of the Art Institute of Chicago. She spent a summer working with eclectic German fashion designer Bernhard Willhelm and worked briefly with Belgian designer Walter Van Beirendonck—known for his unusual color combinations and the fashion collective, the Antwerp Six.

“To see the sexuality and wellness industry blow up over the last five to seven years makes me so happy for the world, because I feel like people are getting in touch with pleasure in a way that’s making us happier, more activated people,” says Gnat. “I think pleasure is essential to living your life and connecting with others, and most importantly connecting with yourself.” 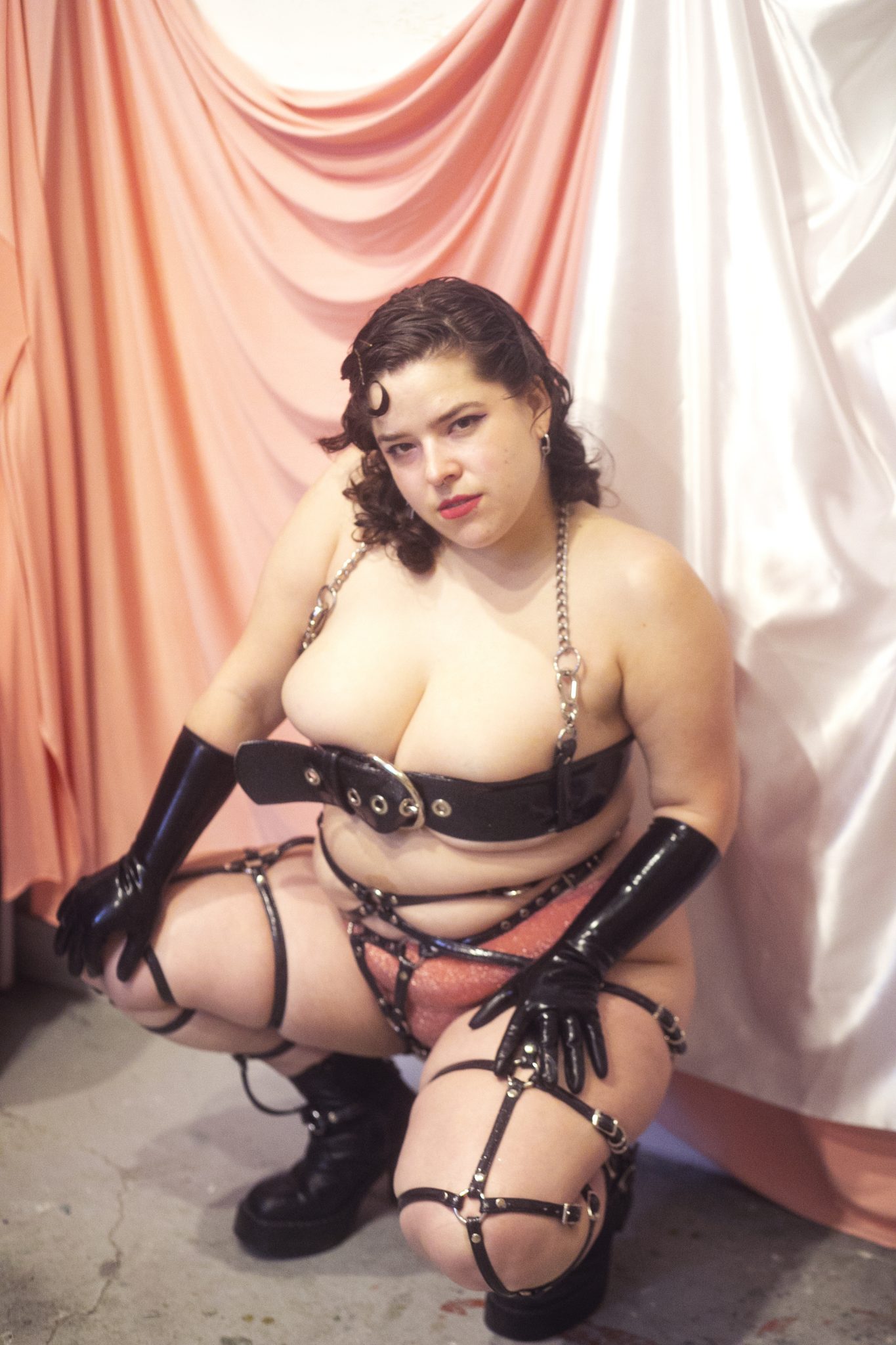 The word “fetish” wasn’t always as closely associated as it is today with sexual expression and gratification. Originally referring to objects or amulets thought to offer protection, that definition later broadened to include objects of irrational devotion or ideas. Fetish fashion is any style, appearance, clothing type, or accessory created with provocative intent. Materials like leather, latex, plastic, spandex and fishnet fabrics are often associated with fetishwear, as are stiletto shoes and stylized undergarments.

While fetish gear might be having a moment, we’ve been drawn to the provocative and taboo for nearly as long as we’ve been wearing clothes. Early fetish designers Nativa Richard and her husband founded their fetishwear company Yva Richard in France just a few weeks before the outbreak of World War I. They started with fetish-inspired hats, lingerie and shoes, and expanded the business by selling bondage photographs and exotic accessories like leashes, collars and whips.

Leather culture and the harnesses, masks and associated accessories are speculated to have grown out of post-World War II biker culture. Chuck Renslow opened the first gay leather bar in the United States in Chicago in 1958, and in the early nineties, he and Tony DeBlase founded the Leather Archives and Museum less than a ten-minute walk from Gnat’s new studio.

“I’ve always been out and queer but when I was younger I don’t think I realized being queer could be feminine,” says Gnat. “I remember buying some gray leather from the textile outlet and making a mock-up of a harness. I didn’t really think it was ‘me’ but then I bought some glitter vinyl and made a harness, some cuffs, and a blindfold for a gallery show. It just hit my freak button and I’ve been making them ever since.”

Gnat’s “Party Gurl Collection” is a holographic, glittery assortment of metallic confetti pieces pressed between clear PVC and fashioned into collars, cuffs, and even a “Kinky Lock & Key Earring Set” with a working lock in silver chrome. The “Lover Babe: Valentines 2020” collection indulges the fantasy with heart-shaped glitter and steel linked chains. 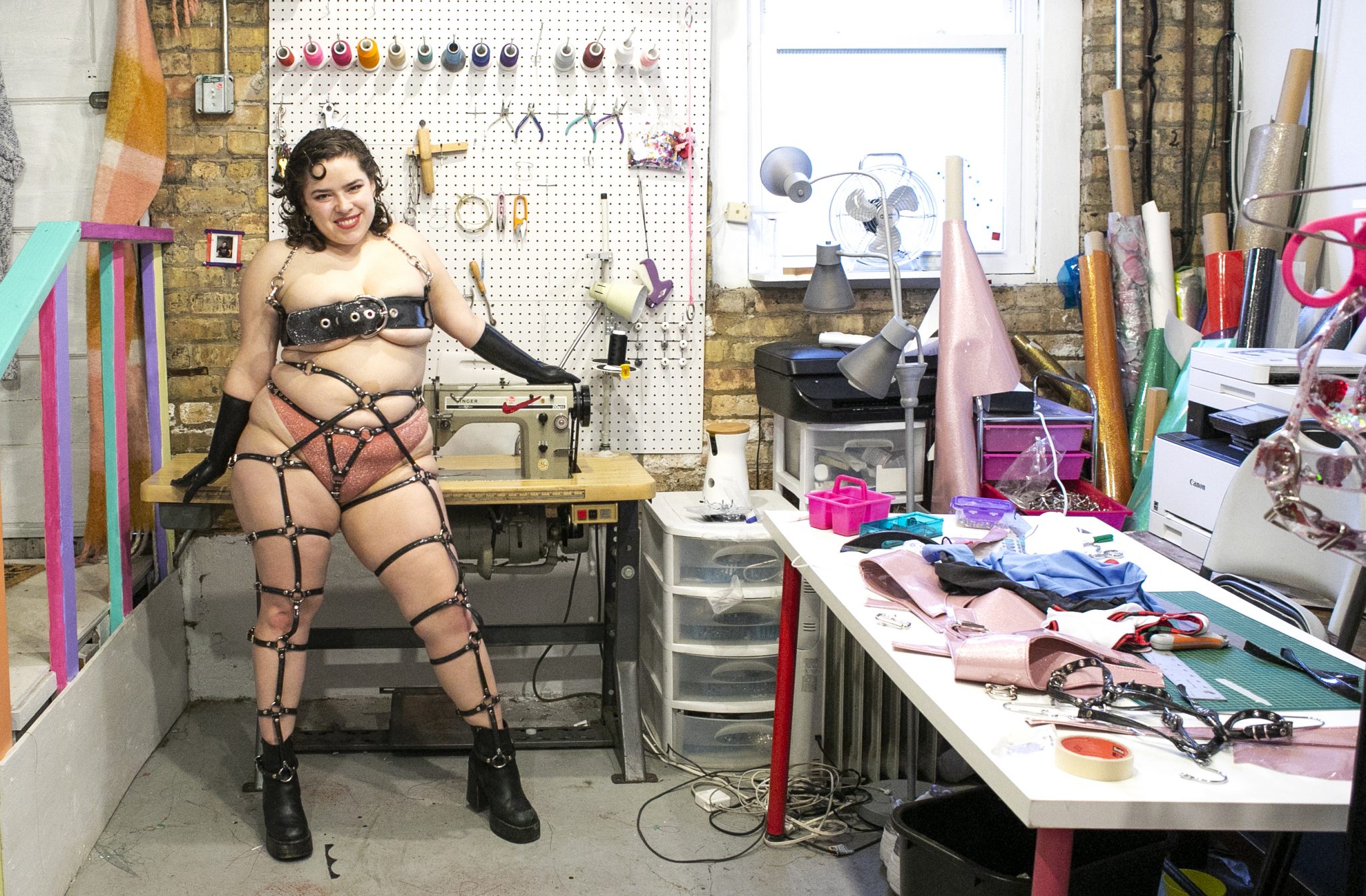 Balancing school, working as a barista in a specialty coffee shop while organizing and hosting regular nightlife events at clubs around the city, and making her femme-centric fetish and bondage gear, Gnat has stayed busy. Her hard work and obvious talent haven’t gone unnoticed—she’s designed one-of-a-kind pieces for performers like Chicago’s Lucy Stoole and last year she designed a full set for Lizzo.

Gnat’s sales boomed when the quarantine went into effect, something she attributes to her customers realizing they might be stuck at home for a while and feeling ready to experiment. “I’ve worked on this business and this practice for so long and it’s amazing to finally be hitting a place where it’s sustainable for me and by some sort of magical preference of people at home, my business has grown during this,” says Gnat. “I definitely feel very empathetic toward smaller businesses where that’s been the opposite, so it’s tricky to want to celebrate my growth while being empathetic and helpful to others.”

Now that Gnat has moved her business into a larger studio, she hopes to eventually be able to provide jobs to queer folks and open it up to the community as a space for workshops. She and her partner Chris, a nurse at Howard Brown, are committed to a better queer, liberated future and also plan to use the space to house donations and medical kits. The goal is to give back to the same community that supported Gnat when she moved to Chicago just over a decade ago. 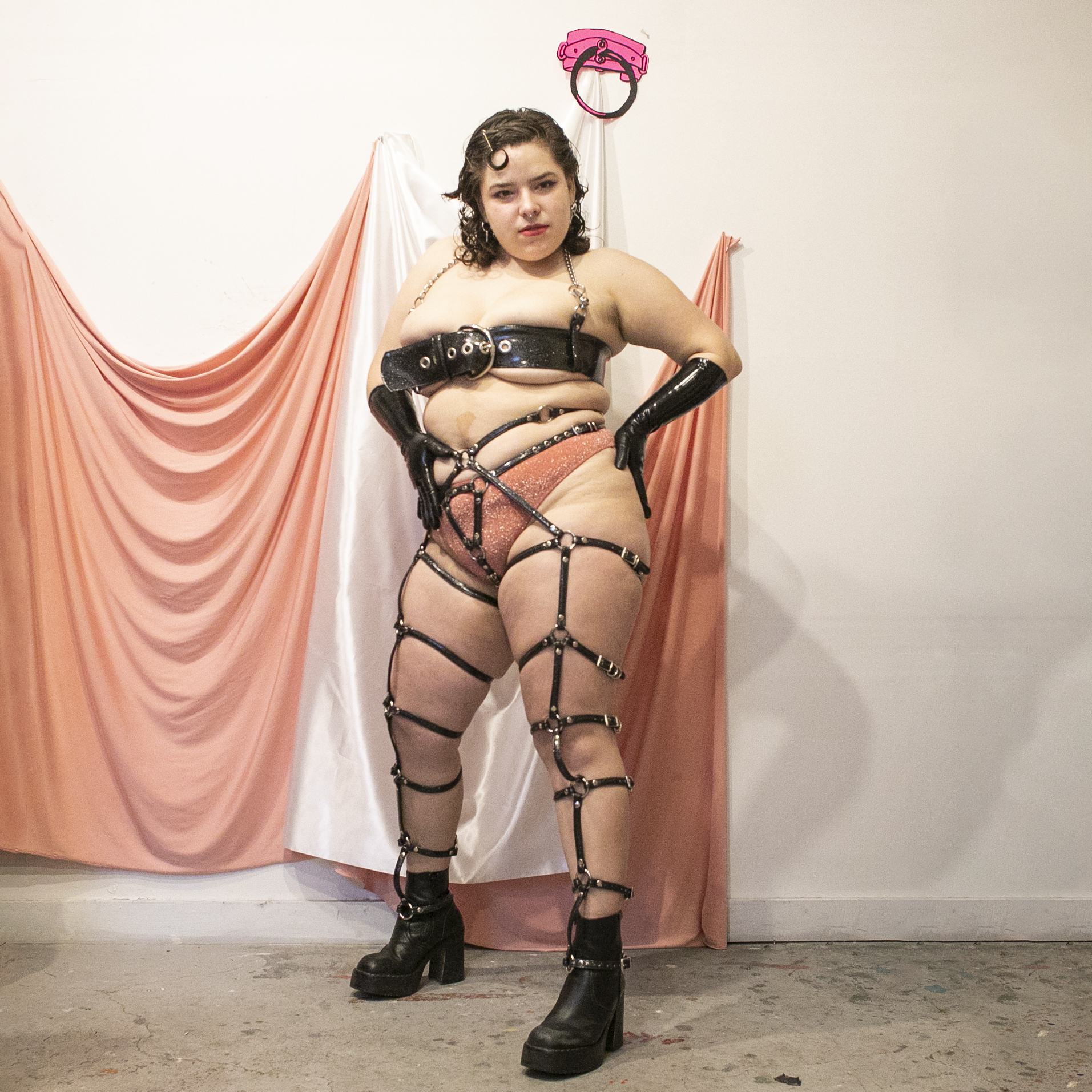 “I feel really lucky that growing up as a queer person in this city, I pretty immediately found groups and communities that I could be part of. One of my first queer parties was Chances Dances [a nightlife collective for queer people from 2005-2018] and they were how I met queer people and discovered queer sex and found my identity,” says Gnat. “Chicago really feels like my home, I became the person I am today here.”

Gnat recently launched a GoFundMe to crowdfund start-up costs of a new workspace and shop. Donations mean she’ll be able to purchase better equipment and supplies that are needed to produces her high-quality harnesses and fetish gear efficiently and safely. She plans to work diligently to generate sales which enable her to continue making investments and donations to Black, trans and minority funds.

“I don’t know what the future of my store will look like. Luckily, until I figure it out, I’m just gonna keep making strap on harnesses and people are gonna keep buying them,” says Gnat. “The world is so fucking crazy, why not do what makes me happy?”