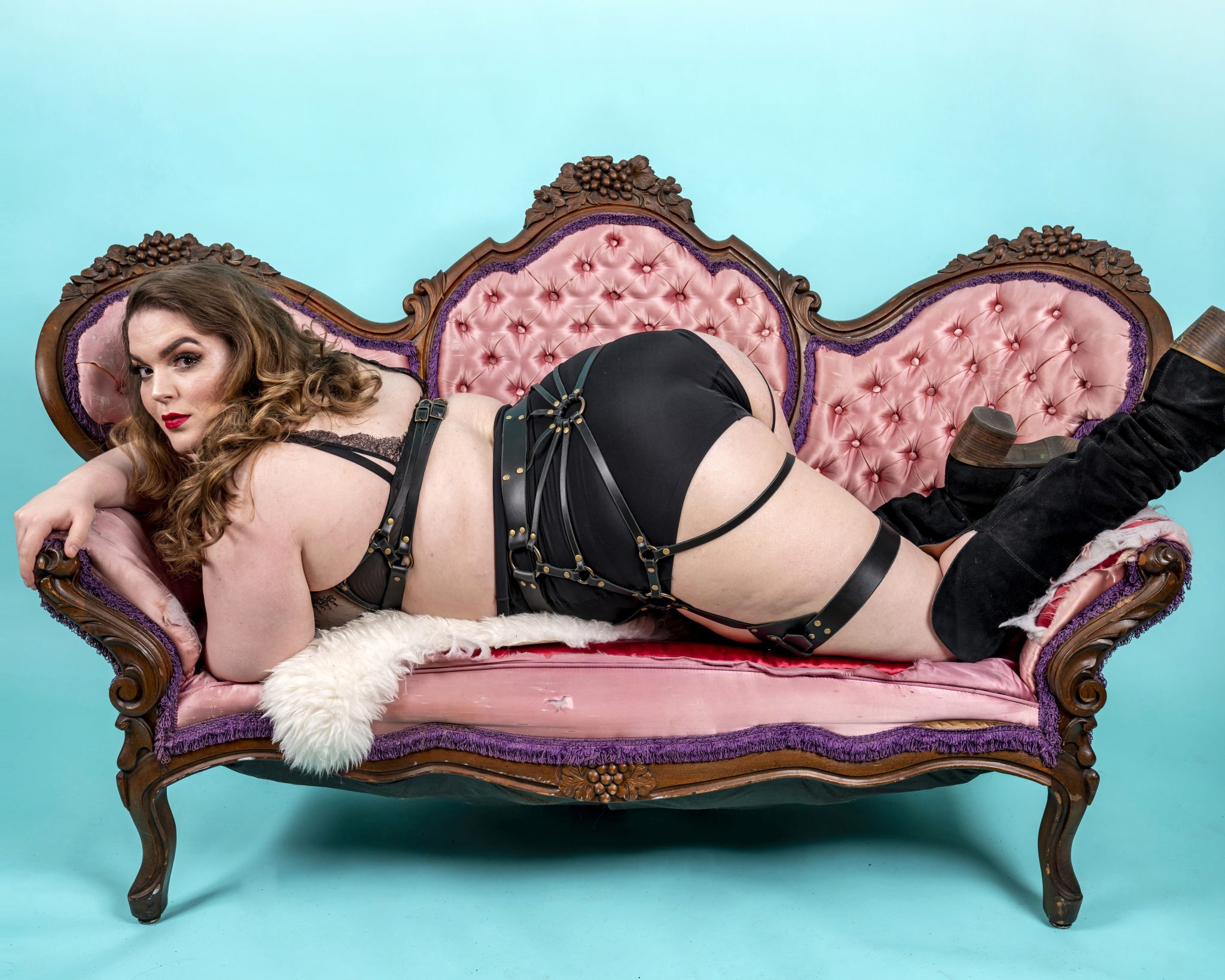 How did you get into leatherworking?

The first leather thing I ever made was a utility belt, which was basically a glamorized fanny pack. It became a staple that I wore every day because I am not a person who can keep track of my wallet and keys and phone; I would lose a purse. So for the past eleven or twelve years I’ve been wearing one of those every day, and I’ve made a few of them but that was with second hand materials I had around. I was a carpenter for most of my twenties, and I got really sick when I was twenty-seven. I have a complicated chronic respiratory illness and I had to stop doing woodworking because of it. People would always ask me about the fanny pack and I was always like “Oh yeah, I’ll start an Etsy store one of these days.” But then when I had to stop woodworking I was like, “Well, I guess I’ll go and do that now.” 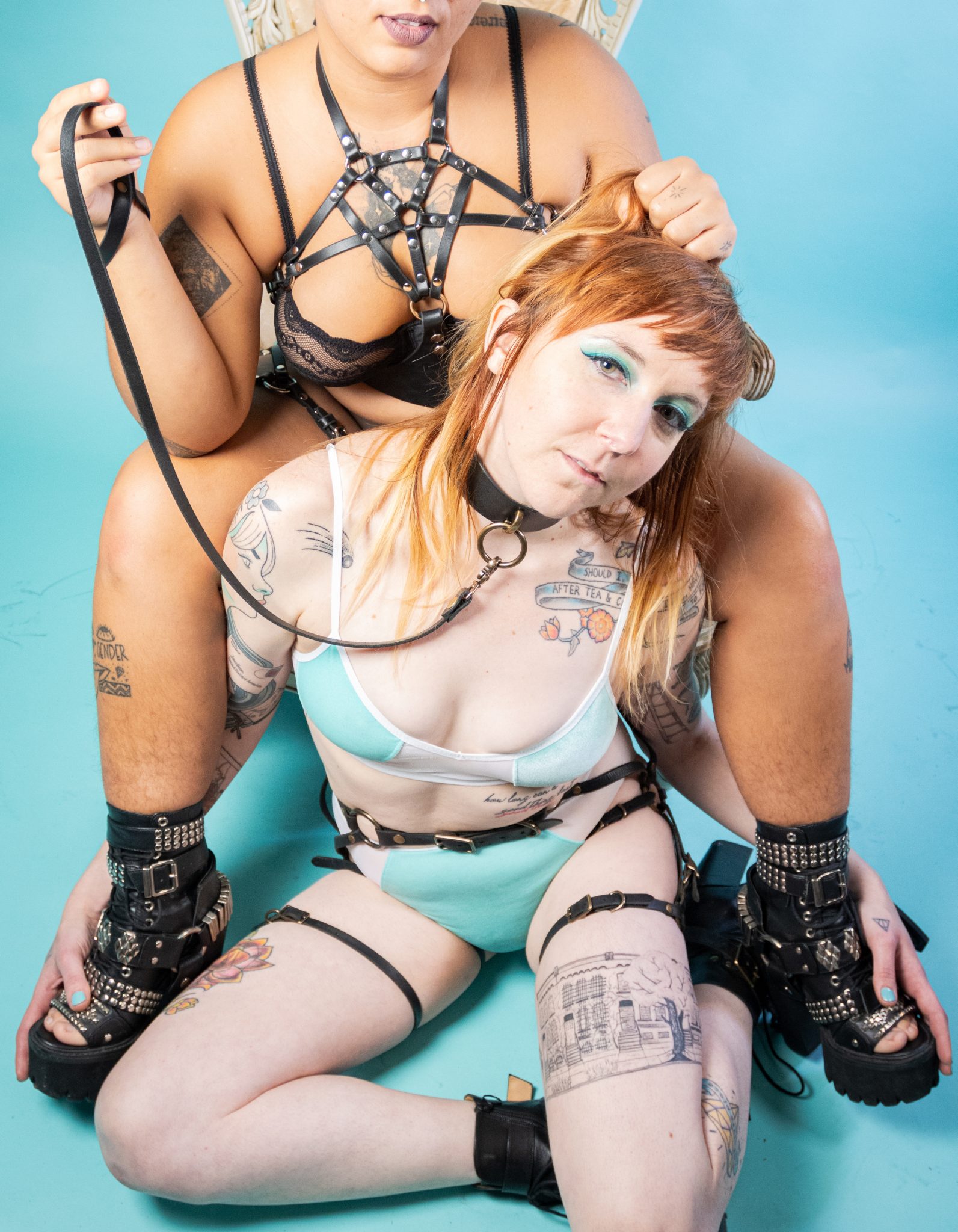 So how did the harnesses come about?

Originally my Etsy store had ten things in it; leather utility belt things, some jewelry. I was playing around with leather and made a boob harness and posted pictures of it online and right away everyone was like “We want this!” So people are much more interested in their sex lives than in jewelry or hipster fanny packs. So I leaned in that direction and the next thing I knew it was pretty much all I was doing. There was definitely a niche to be filled because the vast majority of bondage gear is marketed toward gay men and inspired by that hyper-masculine, thick-strap aesthetic. There’s not a lot of functional bondage gear that has a more feminine energy or is made specifically for women’s bodies, especially plus-sized bodies. 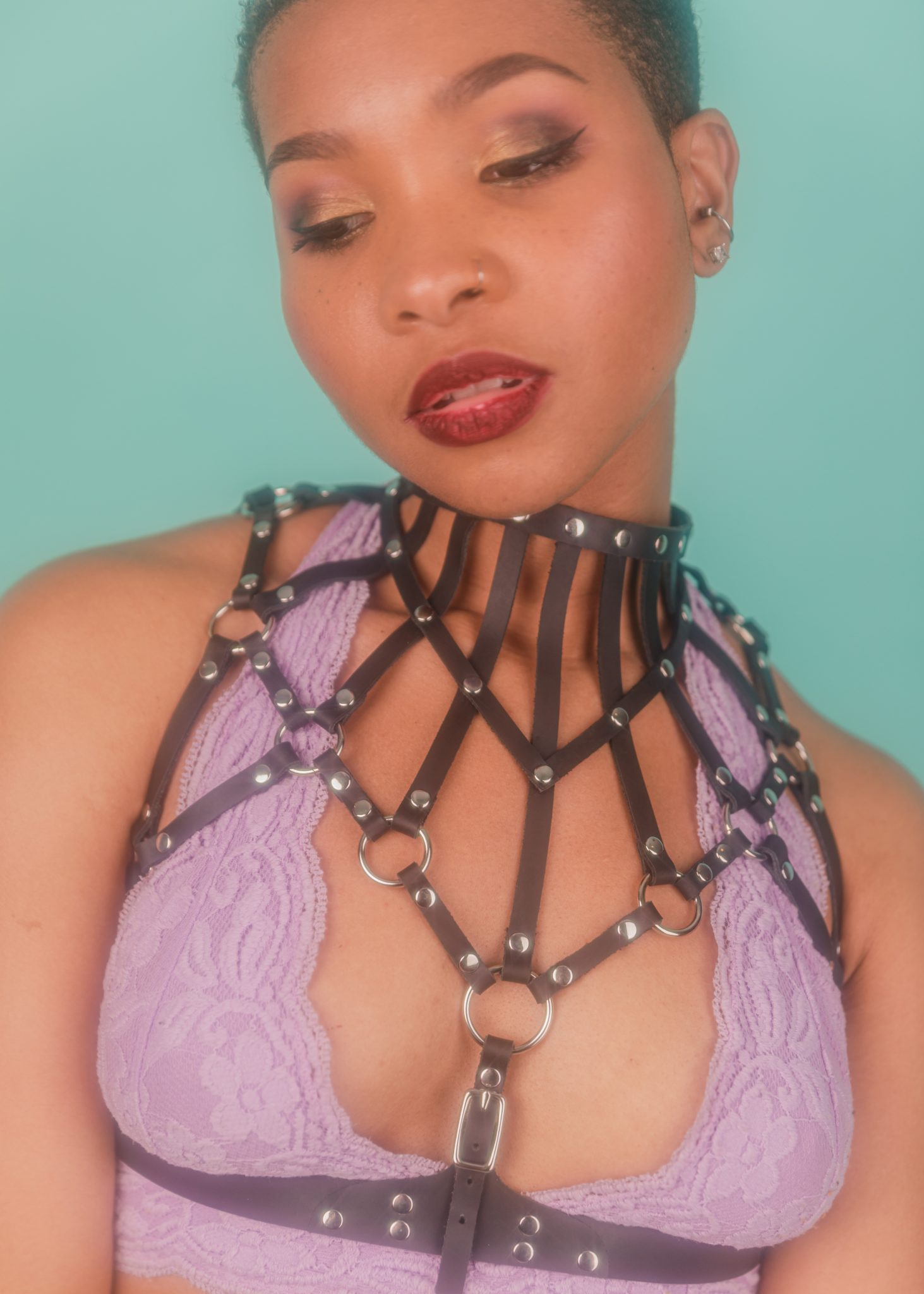 When I was starting out, I made things that I would want or that I would feel sexy in. Then as I started making things for and interacting with more people, you learn how they feel about their bodies and their sex lives. I have a wider perspective when I start designing something. And a lot of it comes from a demand that I’ve heard people say, like specifically, high waisted strap-ons. People want a strap-on that feels sexy, not just for utility, but something that feels empowering to wear. 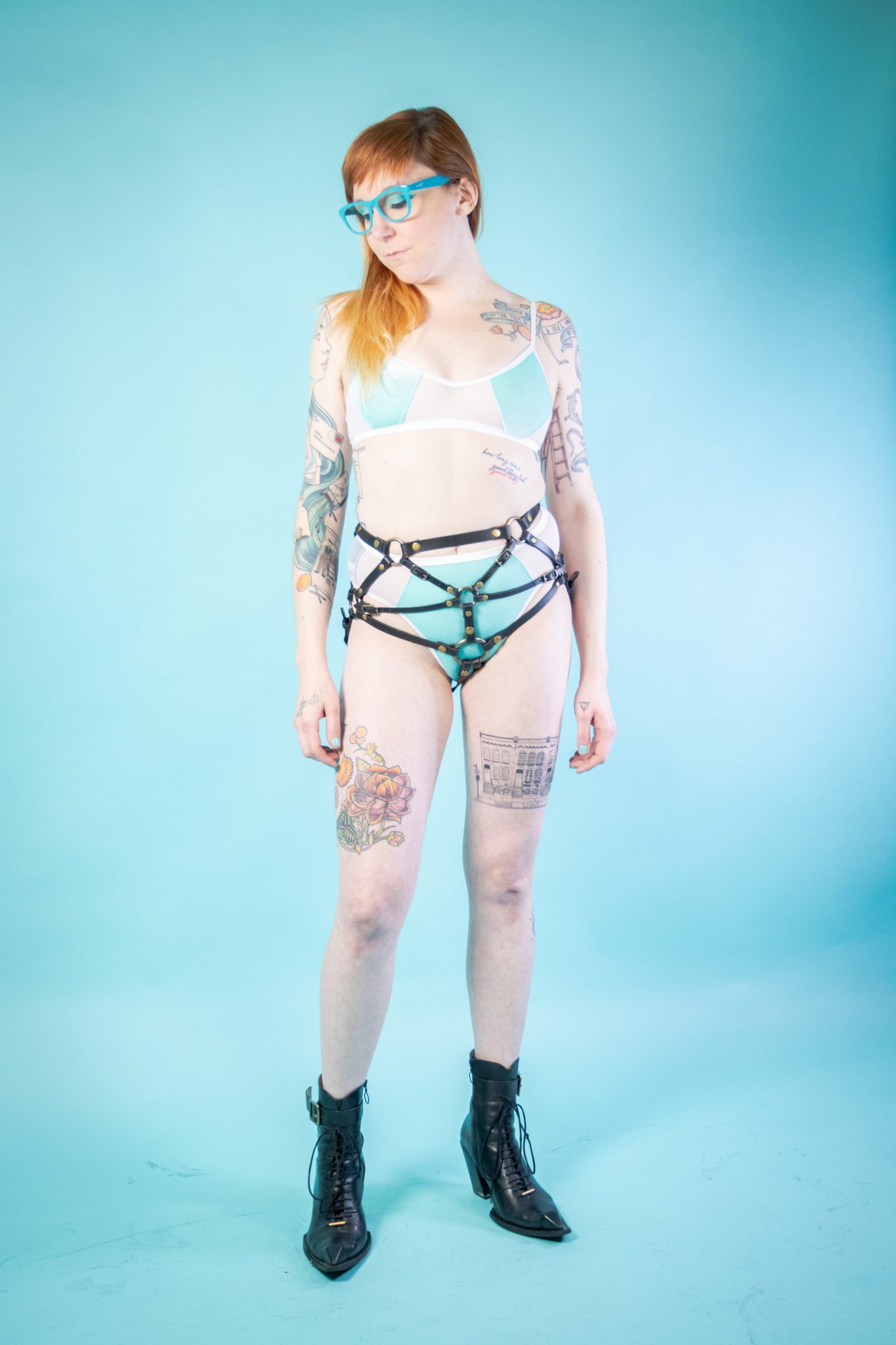 What makes your harnesses different from the others that are out there?

Because my targeted ads are almost exclusively lingerie, or leather-related things at this point, I see so many things from like Savage Fenty—no disrespect to Rihanna, I love her—but brands like that, they sell handcuffs that you can just tell at a glance if you put any pressure on them they would break. They’re really thin and held together by a piece of chain and it’s cute but it’s not at all functional. A lot of my stuff is not bulky, has a strong femme vibe to it, but it’s also functional. It’s not going to fall apart. 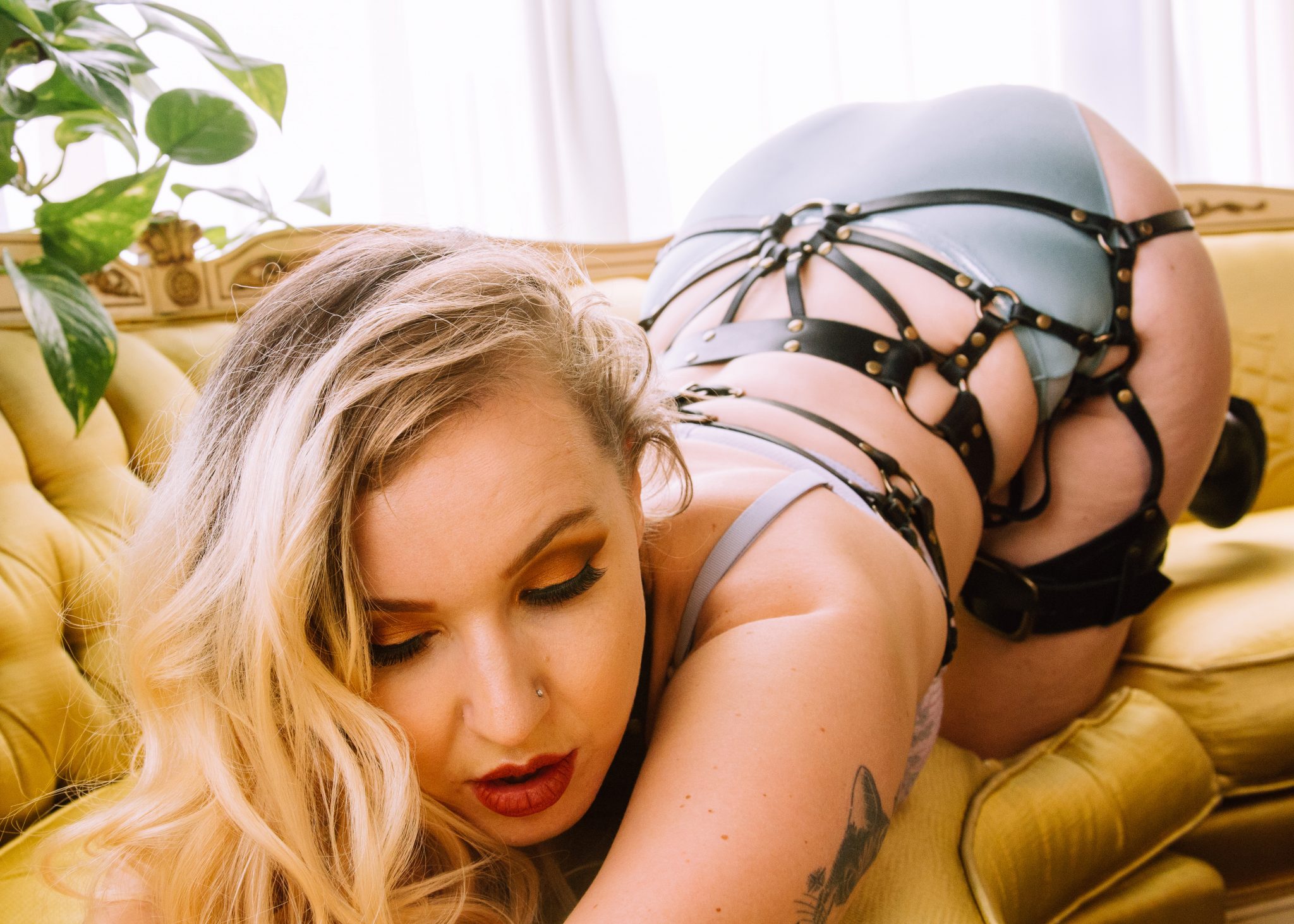 When it comes to leatherwear and kink attire, it can sometimes be intimidating to explore your sexual style. How can newcomers try acclimating to leatherwear?

I have a lot of “beginner” kink stuff because it could be fashion just as much as it is functional. I feel like more people feel comfortable buying something that isn’t as in-your-face bondage-y. Like I said, I have a pair of handcuffs that are fully functional but they’re still pretty dainty and not super intimidating. There’s that gray area where people who are dipping their toes in the water feel comfortable instead of jumping right to latex body suits and whips. Whenever people shop in person, I encourage them to try things on and they are able to figure out pretty quickly what they’re into, what they’re comfortable with, and what they like. Obviously that’s not happening right now, but I do have a few simple harnesses and simple collars that are baby steps into the kink world. 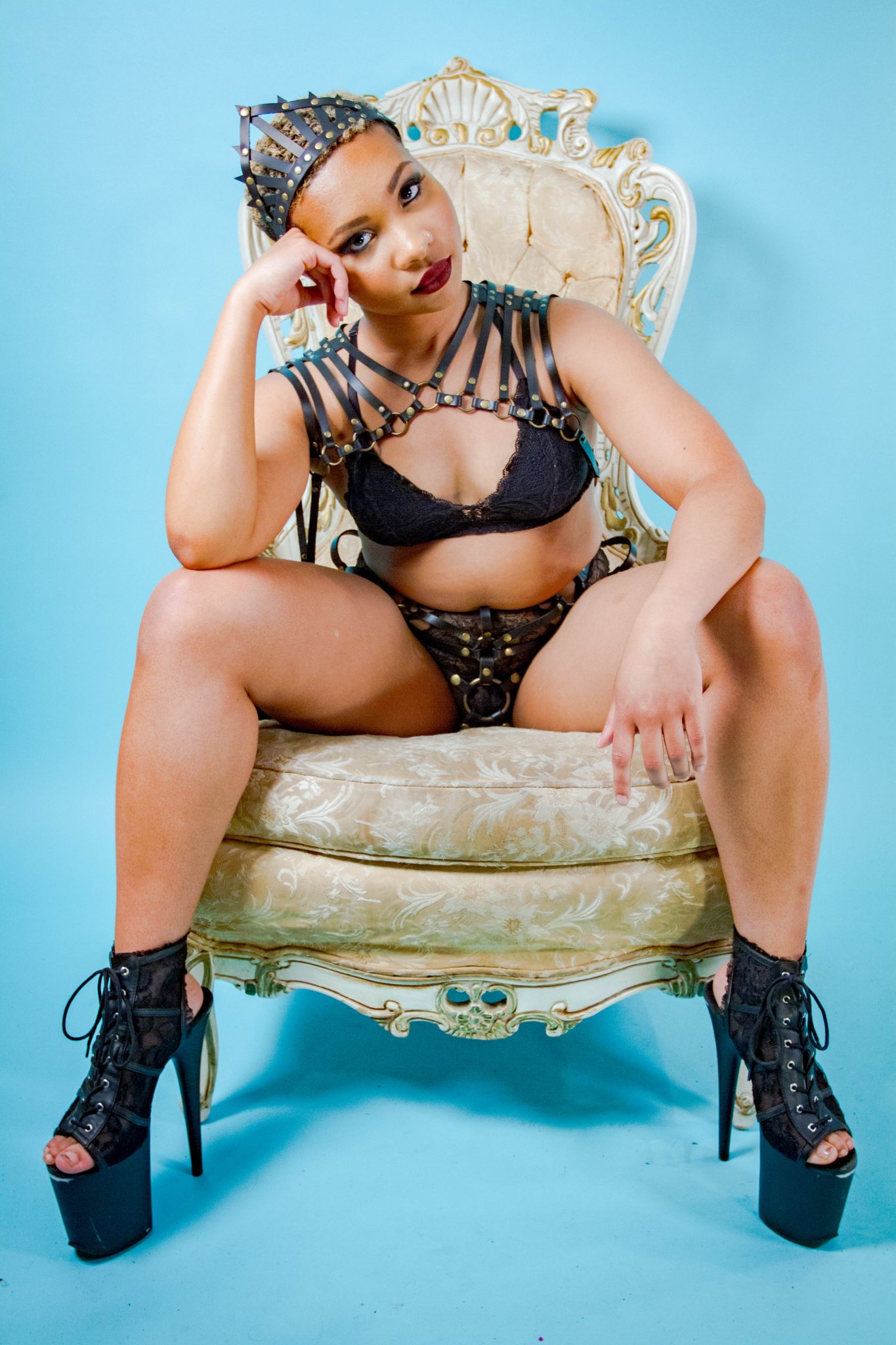 Allowing for sheltering-in-place and safety precautions, how can people at home dip their toes into your designs?

What’s really cool to me is since the quarantine started, my strap-on sales have skyrocketed. People are getting creative and I love that. When quarantine started I definitely didn’t think my business was going to survive this. Prior to six months ago, I did most of my sales in person. I would travel around the country doing different events and conventions but luckily, people are still horny. Probably hornier than ever, so I’ve been able to [make the] transition to online. People who are in relationships are getting much more playful and experimental, which is cool. But mine isn’t the kind of lingerie that men buy for their girlfriends. It’s more the kind of stuff that women or queer people buy for themselves to feel sexy in and I think there’s a lot to that. When I started making stuff just for myself, it was about how hot I feel in this. And not just with plus-sized bodies but with queer bodies, having something that was like made to fit your body can be pretty rare. I’m not plus-sized but I don’t even fit into my own sizing chart. Most women don’t fit into a standard sizing chart, so being able to get something made to your measurements is really nice. I was working on a strap-on harness for a trans woman so it needs to have a higher anchor point, and just different bodies require different things. Bespoke fashion is really cool for that and especially for something like a strap-on, you want it to feel like part of your body.

Find Emma Alamo online at emmaalamo.com and shop at her Etsy store at etsy.com/shop/emmaalamo