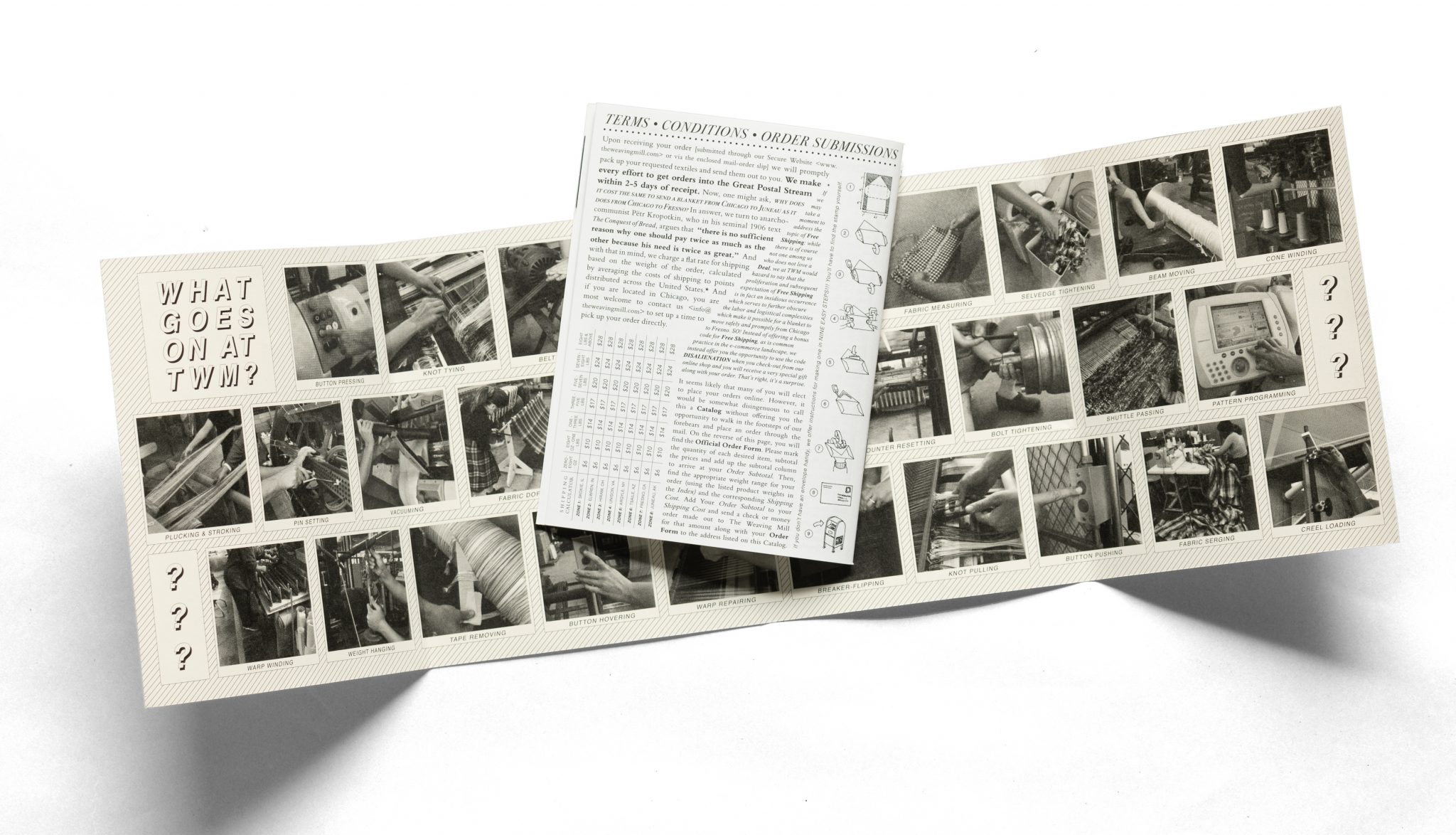 The Weaving Mill is unlike other industrial weaving mills: artist-run and community-oriented, their focus is quality over quantity, humane modes of production over the bottom line, and reuse of discarded materials without sacrifice to style. The way Emily Winter has run the space since 2015 can be seen as an ever-evolving art project in itself. A once-decaying mill operated by the Chicago Weaving Corporation, The Weaving Mill offers programs such as W.E.F.T. (which stands for Westtown Education for Textiles), a partnership with social services agency Envision Unlimited in which adults with developmental disabilities learn how to weave and get sixty percent of proceeds from the sale of their output; and W.A.R.P., their West Town Artist Residency Project, in which they host art workshops and residencies (“warp and weft” are basic components in weaving). Besides those programs, The Weaving Mill carries their own production, sold mostly in-house but once picked up by brands such as Rejuvenation, Unison Home and Ace Hotel.

The catalog The Weaving Mill released this season echoes their unique ways of making things: a pocket-size tome that details the conscientious process of how each object came to be, written in a fun tone that comes off as a casual chat with a fellow design enthusiast. The graphic design by Matt Wagstaffe and Winter herself feels both fresh and old-school. Products like rugs, blankets, pillows, dishtowels, placemats, tops, jackets and bags get the spotlight they deserve, without unnecessary distractions. “I’m interested in un-demonizing things and finding ways of expressing the ways that they hold history and people and labor within them,” Winter says. “As we’ve been branching into more functional home goods and apparel, [a catalog] seemed like a flexible and fun way to think about communicating not only the things themselves but something of the stories behind them.”

Why did you decide to start a catalog right in the middle of the pandemic?

I have been wanting to make a catalog for TWM for some time. As we’ve been branching into more functional home goods and apparel, it seemed like a flexible and fun way to think about communicating not only the things themselves but something of the stories behind them. We got a DCASE grant to support the development of the products as well as a survey series, which I’d been working on in the months leading up to the pandemic. A good amount of TWM’s income in the last couple years has come from in-person sales (pop-ups or open studios or markets), so when the pandemic began and it became clear that wasn’t going to be happening this year, that was a pretty solid impetus to put focused energy into the catalog project to replace some of that lost income. Also, who doesn’t like receiving quality mail? A lot of our projects this year have been about trying to maintain some type of connection with a broader community of friends and supporters in the absence of in-person gathering. We started a print newsletter, distributed indigo seeds, hosted a remote residency—all of these programs were about moving outside the digital realm and trying to create channels for material connectivity and communication. Additionally, I was thinking about how if in ten years, the primary archive of TWM projects was Instagram or digital images, I’d be a bit bummed out. I want to have a broader mode of dissemination and a material record of the work. I feel like the crisis of the pandemic definitely instigated a lot of “if not now, when?” thinking for me when it comes to TWM.

Why did you use this format to advertise your products—especially considering small, independent, local businesses don’t usually have their own catalogs, and bigger companies are moving away from them?

For me, this catalog is both a functional catalog—it communicates about available products, provides opportunity to purchase them, tells you something of the studio producing them—as well as a meditation on the form of the catalog, this ubiquitous piece of graphic design that has its own rules and logics and that has taken all these different shapes over the years. I’m not interested in making print material for print material’s sake. It was important to me that this would be an object that would be interesting, edifying, funny, engaging, regardless of whether or not you want to purchase anything. Of course, I want our textiles to move into the world, but I also want to create opportunities for people to understand something of the ethos and practice and specificity of TWM. Playing with the tropes of commerce is something that I really enjoy about TWM, and is a big part of the graphic and communicative work. 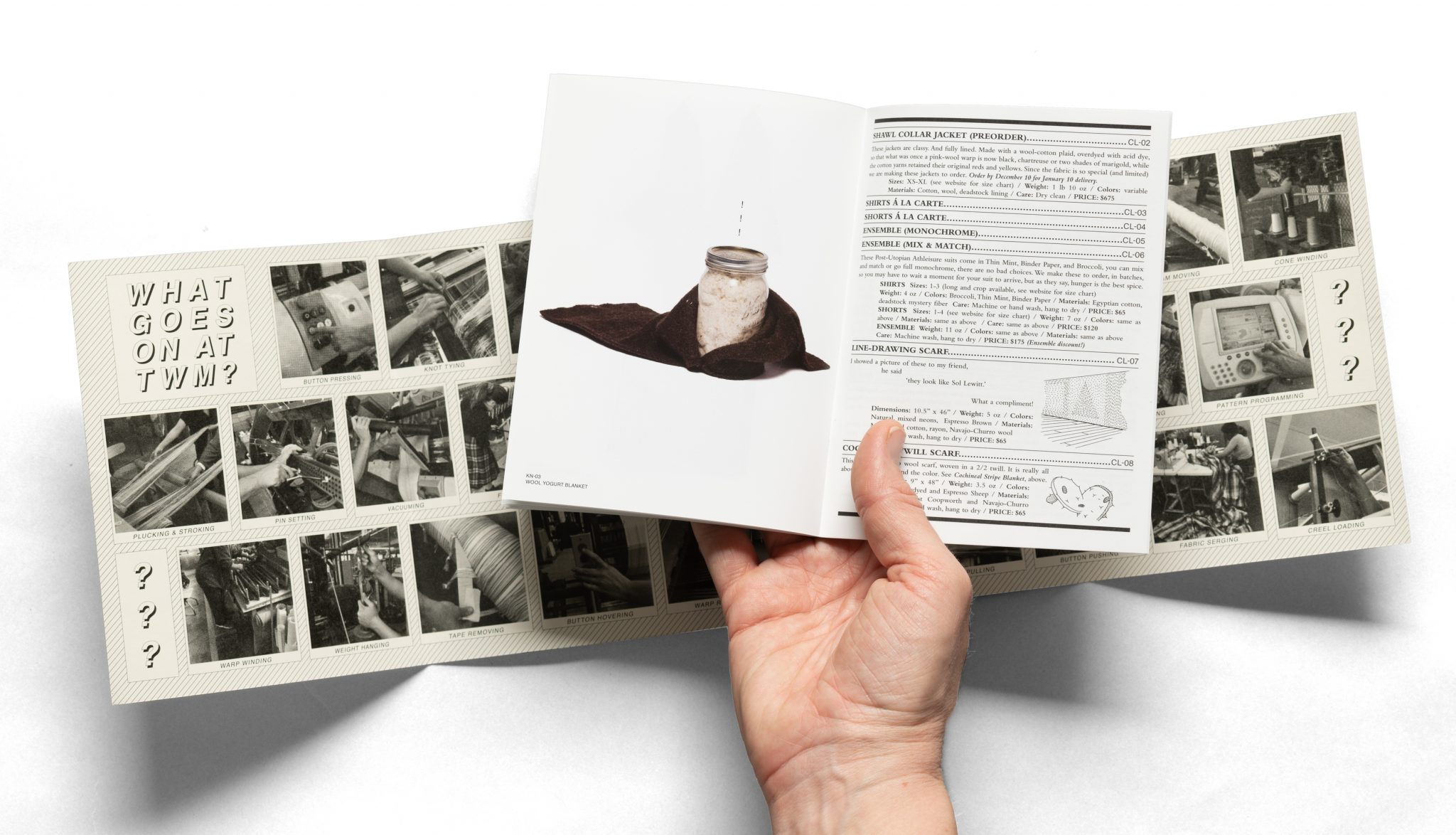 What were the inspirations for your catalog?

I’ve been enamored with vintage Sears catalogs since I first came across them. I spent a really wonderful day at Harold Washington Library about a year-and-a-half ago, looking at examples of Sears catalogs from every decade from the 1890s through the 1960s and trying to map out what their elements are and how the design languages changed over time. Those catalogs are so much about their volume and density—the huge number and variety of products they offered. In working on this catalog, it was clear that we weren’t going to have that sort of variety—I think we ended up with about thirty separate listings—but that we wanted to communicate something of the density of the Sears catalogs in other ways. So that came in with the design language that Matt [Wagstaffe] and I developed. I had a really great day at the Joan Flasch Artists’ Book collection at SAIC, where they pulled a huge range of catalogs and catalog-adjacent publications for me to look at. A friend gave me a stack of old seed catalogs that she had collected—among them Fedco and J. L. Hudson. Both of those were major inspirations, and they incorporated simple and direct text layouts with tender illustrations. American Science & Surplus was a big inspiration in their description writing—you want to read the descriptions even if you have no intention of buying those things. You get the sense that people are having fun working on that catalog. I wanted that feeling to be present in ours, too. For a while, I was asking people what catalogs they liked as kids and if they were still in print, requesting copies of them. Looking through all these helped me come up with some of what I came to think of as a catalog taxonomy. What are the necessary elements of a catalog? I think that a lot of people have sort of nostalgic feelings about catalogs, there’s a sort of possibility latent in them, which is not just about the possibility of acquisition but maybe more so about a sort of access to a world outside of your own, through material and narrative. 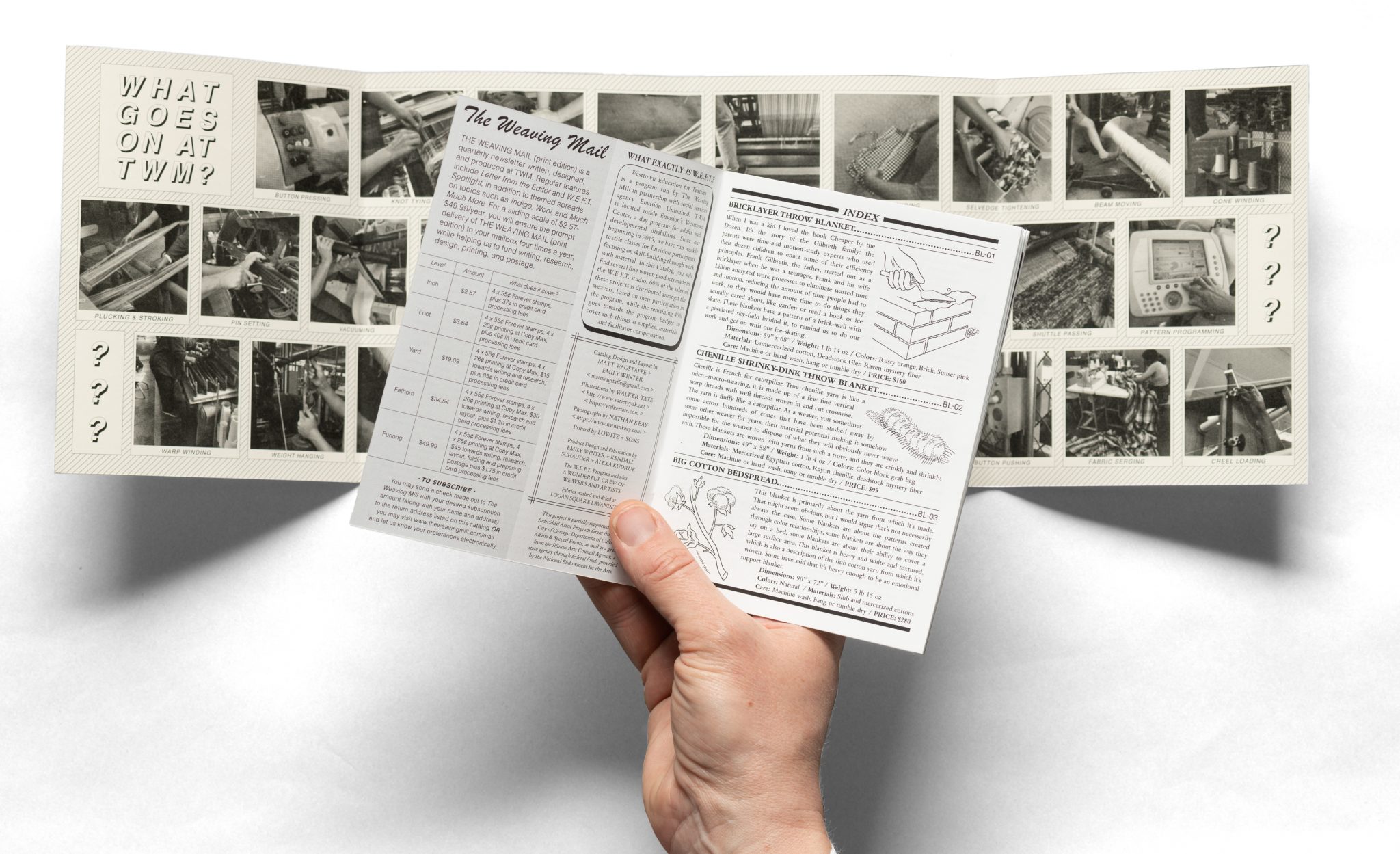 I love the slogan “Materialism you can get behind.” Could you elaborate on that?

Materialism, as it’s used most commonly nowadays, has this connotation of a sort of shallow infatuation with things. I’m interested in un-demonizing things and finding ways of expressing the ways that they hold history and people and labor within them. In the past I’ve been resistant to making functional things, as there was something I couldn’t wrap my head around in terms of the commercial side. But over the last couple years, I’ve let go of that and tried to appreciate the unique capacity that TWM has to be an island of production-methodology in a sea of production-methodology bummers. It’s also a bit of a joke on historical materialism, which in Marxist theory, is the idea that history unfolds in response to material conditions or modes of production instead of people’s ideals or philosophies. Material conditions drive history, not the other way around. That is a way of thinking that resonates deeply with me, and in many ways informs how TWM has taken shape, in response to material conditions.

The Weaving Mill catalog is quarterly and can be mailed via subscription, paid in variable fees to support its making (starting at $2.57). Products can be ordered online or via an order form in the catalog. They can also be purchased at Neighborly in Wicker Park.