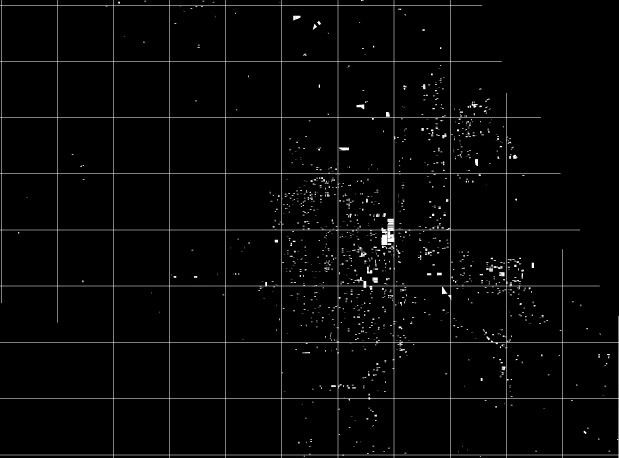 Editor’s Note: The 2021 Artistic Director of the fourth edition of the Chicago Architecture Biennial—David Brown—a designer and educator proposes with “The Available City” that there are more than ten thousand city-owned, vacant sites awaiting transformation. The scale and ambition of his proposal is staggering, and perhaps for many, the rich ideas put forward risk becoming mere abstractions and thought experiments.

And so the question remains: how can you see 125 million square feet worth of vacant land? We asked Heidi Metcalf—an architect, designer and data enthusiast—to help us understand the scope and scale of city-owned land in Chicago. The pictures she created are metaphors—visual tools and frameworks designed to expand our imagination. By expanding the limits of our language, they expand the limits of our world, helping us grasp the scale of the challenge at hand so we make no small plans.

Heidi Metcalf: The Chicago City Owned Land Inventory is a database managed by Chicago’s Department of Planning and Development. This collection provides location, zoning, community area, zip code and other information for each parcel of land currently owned, leased, or sold by the city. While these figures are updated daily, the dataset I worked with was last updated August 25, 2021.

Much like the politics at play in land ownership, the 379,278 elements in this database needed further cultivation. After the process of removing any parcel that did not have a location tag or was not currently or previously owned by the city, 16,779 parcels of the 19,961 listed remained. Using Geographic Information System (GIS) mapping, these parcels were located and used to calculate the overall area of city-owned land across Chicago, which is about 125,789,695 square feet. The City of Chicago thus owns roughly 1.95 percent of the entire city.

Please keep in mind that I am not a data scientist; I am an architect and designer with a love for research that pushes us to interrogate the over-generalizations and redundancies that plague our environments. Therefore, these maps and diagrams are not meant as a tool to divide, rather, they are intended to make visible the scope of what is available for transformation.

We may not physically see the division lines that dictate so much of what happens in our city when we walk down the street, but the invisible infrastructure en masse is hard to ignore. This process and information is full of numbers and data, but its story impacts the neighbors and people whose communities within which we walk by, inhabit and intervene.

What would normally be without light is inverted as city owned land spreads across the city. Depicted within a grid of single square miles, these voids alone are enough to read the overall shape of Chicago. At 2% of the city land, the impact of this availability is explicit. 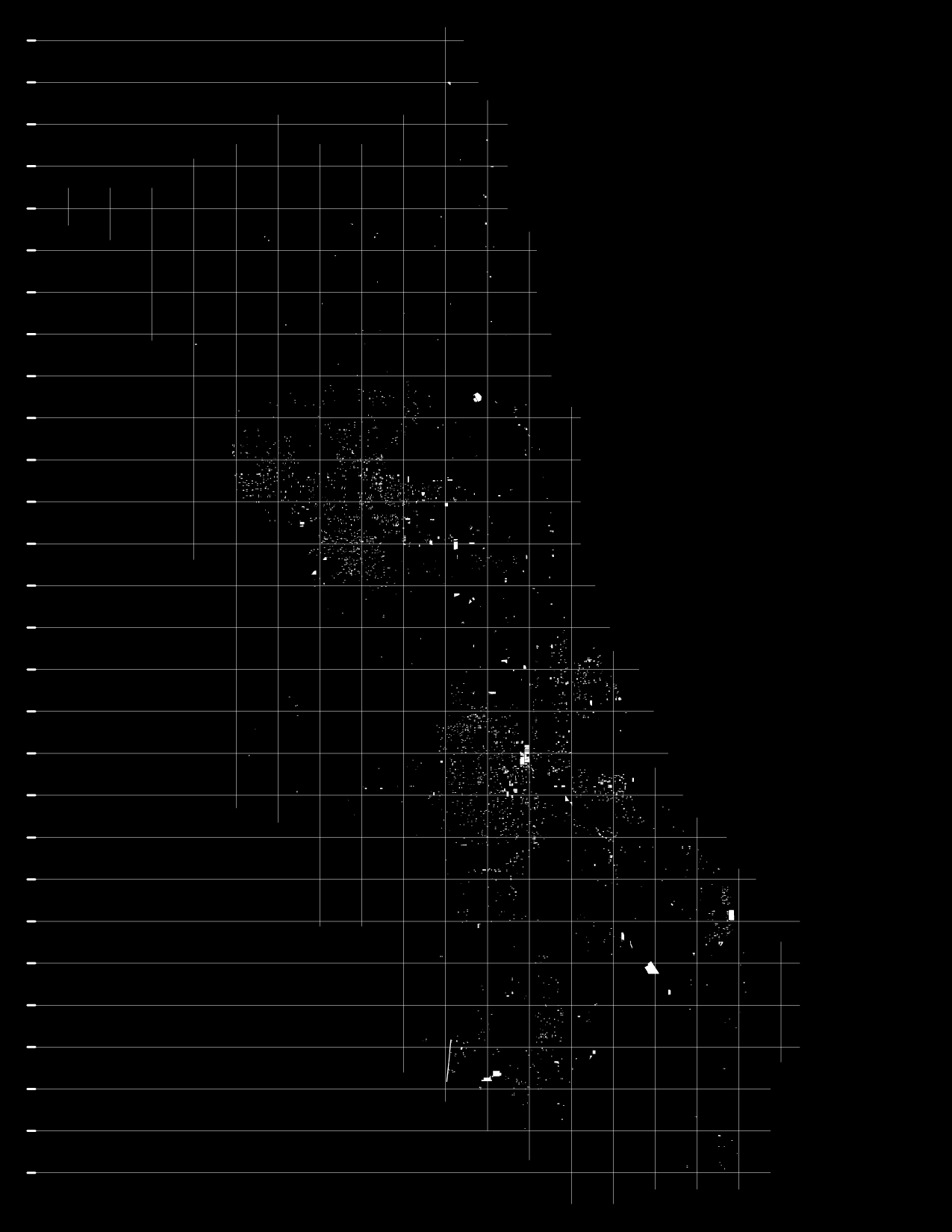 65% of the city owned parcels accounted for in this research are in residential zoning areas. Devalued, isolated and organized from smallest to largest, the parcels shown here are each centered within a single acre field, the average cost of which is $663,000 in Chicago. These potential ownership opportunities thus accumulate to approximately $389,181,000.00 of land value. 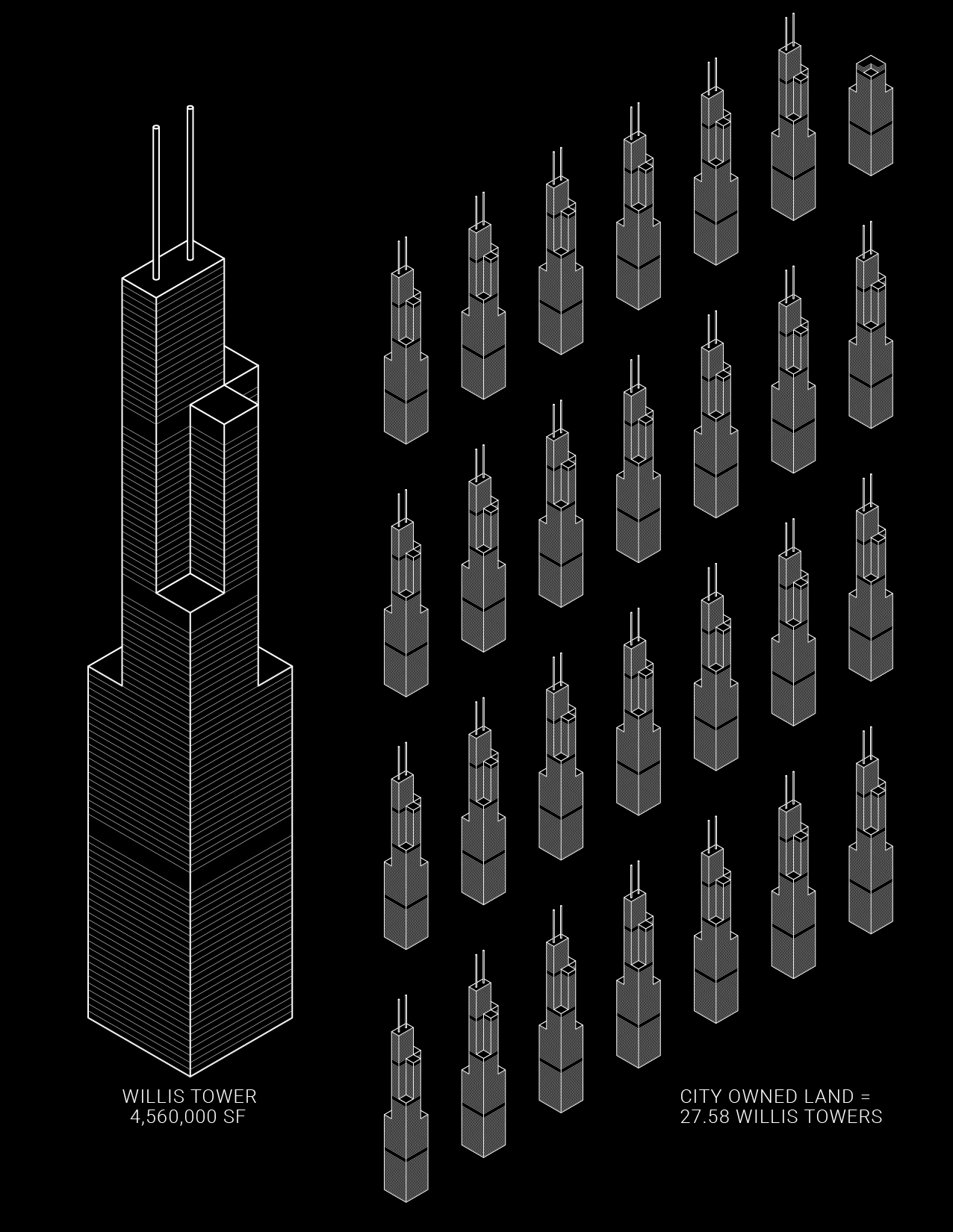