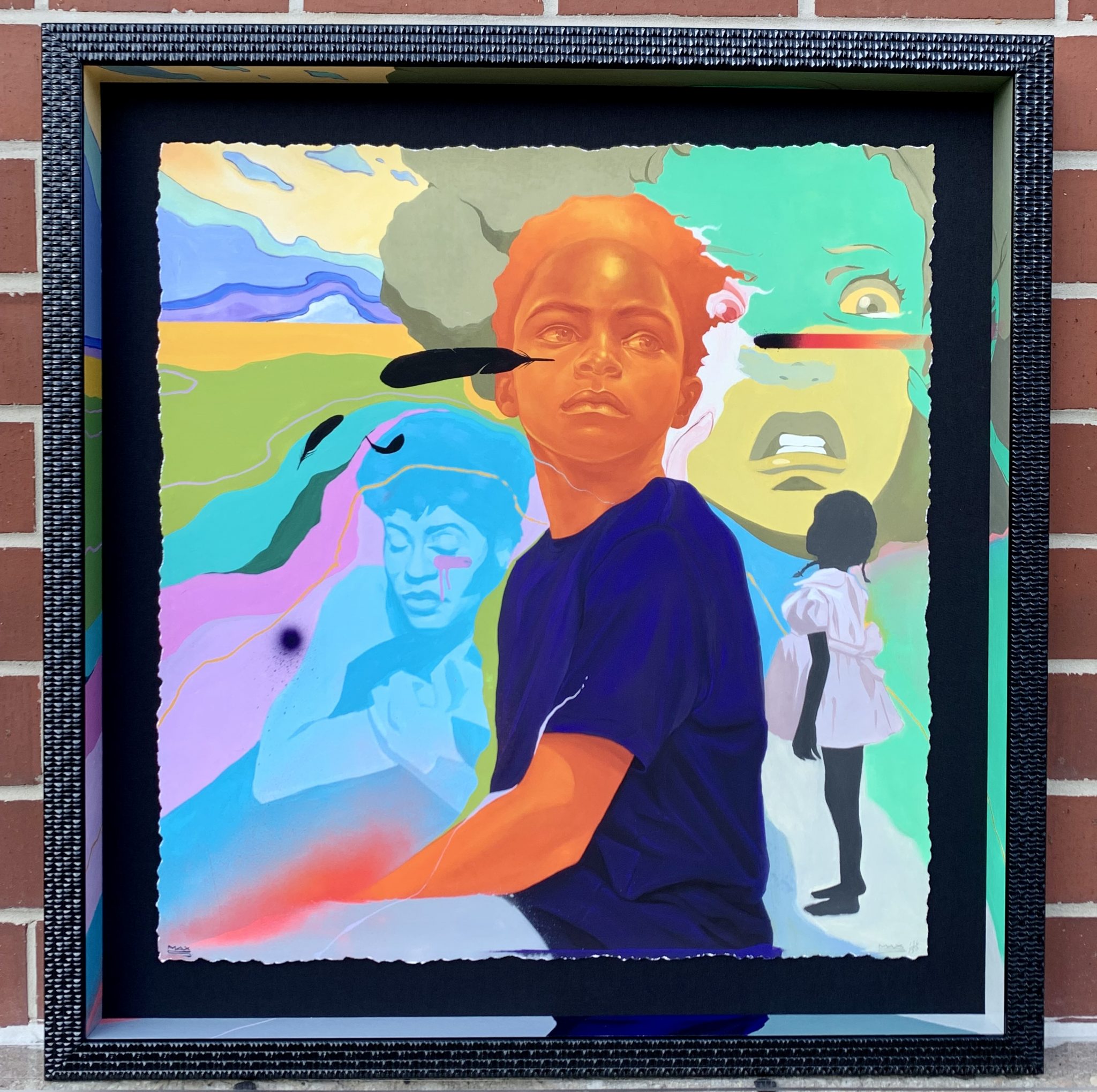 Where’s the best place to view art from Chicago supernovas like Jc Rivera, Hebru Brantley and Kayla Mahaffey? An international art gallery? Nope. A lucky collector’s walls? Not quite. Starting October 1, Frame Chicago’s new store will feature installations by all three artists. Owned by Firoz Rajani and family, this framing shop is doing something different.

The new shop at 1627 North Clybourn will be easy to spot—just a few doors down from their current space, the team plans to feature a mural by Langston, creator of the United Center’s Black Lives Matter artwork, on the brick wall outside. Brother and sister duo Alisha and Shafiq Rajani, both involved in their family business, walked me over to check out the work-in-progress, emphasizing that this shop is, above all, for the community. “It’s just [going to be] Chicago contemporary artists,” says Shafiq, his voice echoing in the bare-bones open space as Brown and Purple line El trains rumbled by. The pair sported Hebru Brand t-shirts emblazoned with the phrase “Buy Art Not Drugs,” and that same phrase will greet customers as they walk through the shop’s threshold. They plan to lay the words in Italian marble tile on the ground in the shop’s entryway. “This wall is going to be a mural by Kayla Mahaffey. She’s taking over the whole wall, and we’re gonna put a huge frame around it,” says Alisha, pointing to a blank wall inside the shop, adjacent to the entrance. I joke that they should be featured on a mural tour of Chicago, and was only half-kidding. 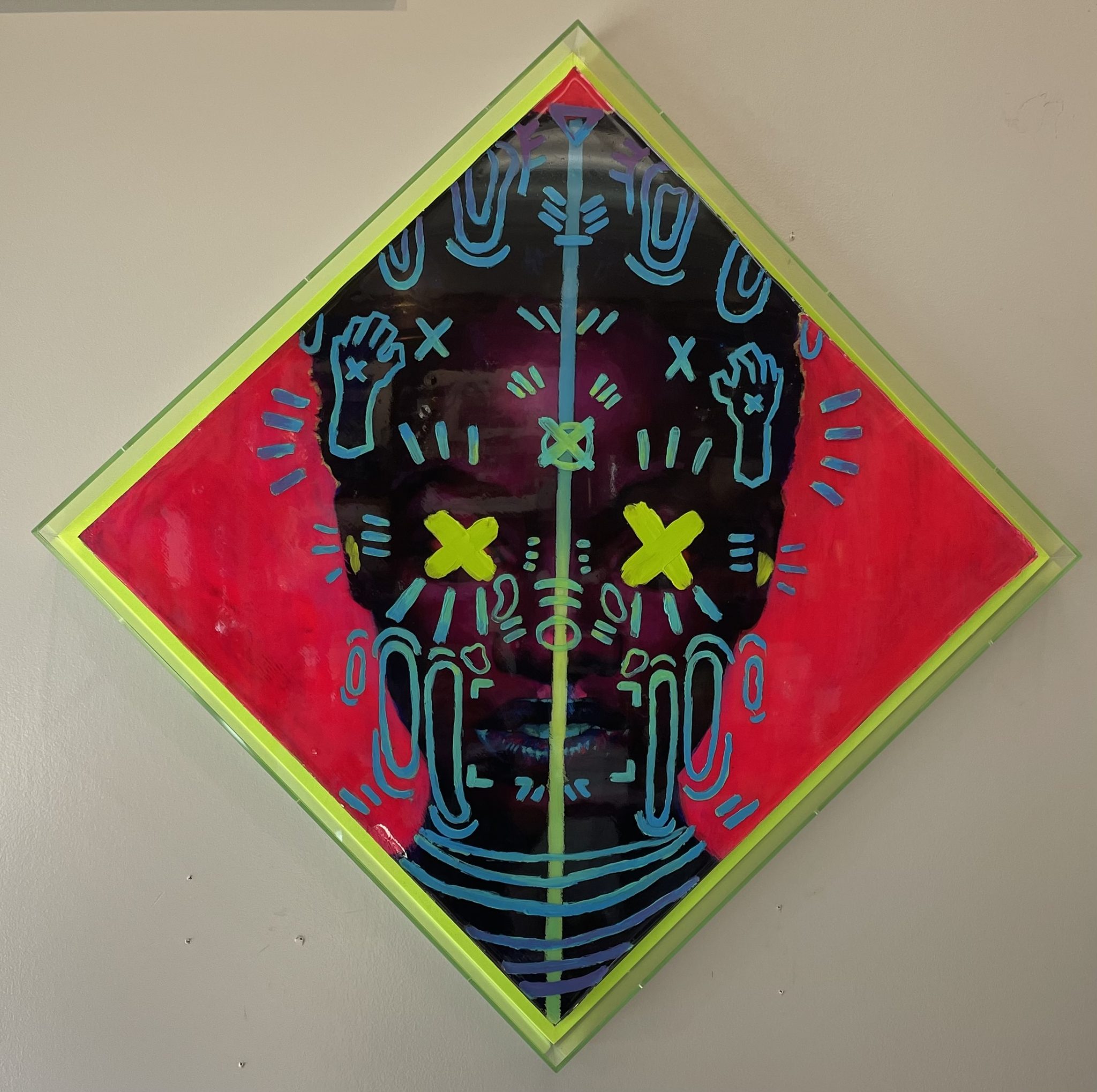 From small-town entrepreneurs to big city mural commissioners, this is a big move for the family-owned business, although they have been modernizing their enterprise for years. Firoz Rajani, a chemical engineer and an artist himself, opened his first framing and engraving business in the western suburb of St. Charles before relocating to downtown Chicago. The family toyed with other locations in the city, but their North and Clybourn storefront stood the test of time. Since then, the store has put down roots at the busy intersection, which they describe as the “center of the city.” “My dad started the business, and just had good customer service so people kept coming in,” Shafiq says, which I later confirm in their Google reviews, which mention friendly and helpful staff. “When Alisha joined, she really got into promoting our work on Instagram and taking it beyond just a black frame and a white mat.” It was from generating an Instagram presence that Alisha began to forge relationships with popular local artists, generating re-posts and even more exciting, upcoming collaborations.

The current shop features a wall filled with work from Alisha’s own contemporary art collection, providing inspiration to customers to think of the way that their art is displayed as yet another layer of artwork itself. I can attest to her design prowess; after bringing in a few Leslie David prints to be framed, Alisha helped me think creatively to affix them with pink-lined white mats and white acrylic frames. “I think of framing as a way to truly enhance the art,” Alisa says and her eyes light up. Amazingly, she was trained formally as a nurse and is self-taught in both art and social media, which she leverages to feature the store’s creations. By way of Instagram and word of mouth, the store has grown its way to a nationwide customer base without spending a dollar on advertising. 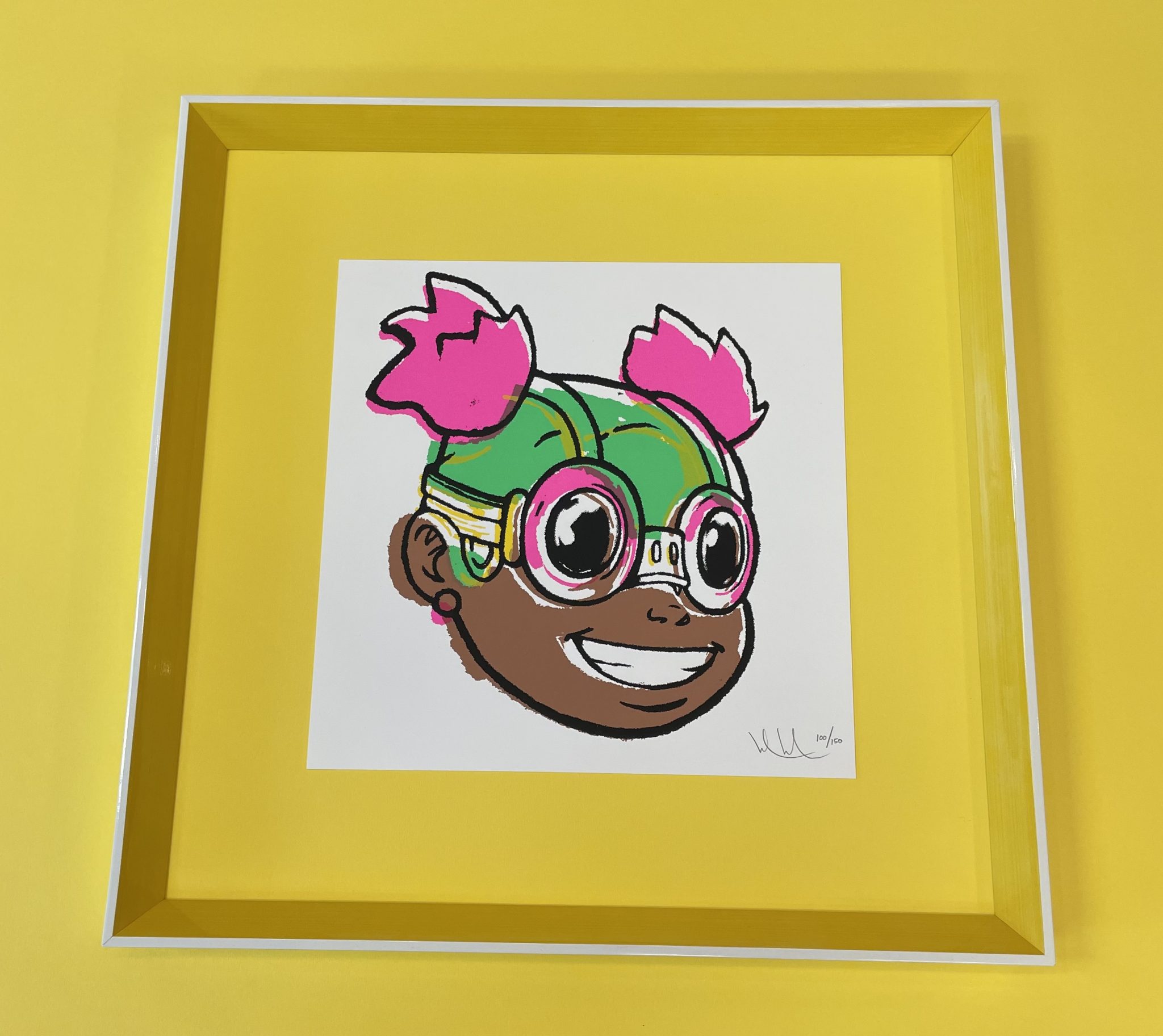 In addition to approaching their marketing and promotion differently, Frame Chicago is an employer of choice, with a team of ten and likely more capacity to expand their team in the new space. “The framers are usually artists,” Shafiq says as we visit the back-of-shop, framers hard at work on a colorful Max Sansing print. He says that employees appreciate learning the craft, whereas other businesses approach framing as an assembly line. This high-skilled labor can drive up the cost of framing, in addition to the high-quality materials used to custom-build each frame. Frame Chicago also reframes how they view competition, especially from the rise of online-only retailers. “Frame is literally in their name,” says Shafiq, referring to Framebridge. His view is that any company driving up customer mindshare of framing is increasing the size of the pie for everyone. The pandemic, too, had a positive impact on sales, as customers leveled up the design of the spaces they were spending oh-so-much time in.

In an age when many businesses are running lean and are more commoditized, Frame Chicago’s success is grounded in perpetual human desires like beauty and connection. Their rally cry of “Buy Art” certainly rings true. In the work they do, Frame Chicago is selling an investment, and the new store is, too, an investment; in their family’s legacy, in Chicago artists, and in the community they hold dear. “This is the last time someone wrote about our store,” Alisha says on my way out, gesturing to a framed article from a 1996 printing of the Kane County Chronicle featuring her father. “’Bout time,” I reply.

Frame Chicago’s new store opens October 1 at 1627 North Clybourn. Until then, find it at 1701 North Clybourn. Follow their Instagram for up-to-date information regarding upcoming events.