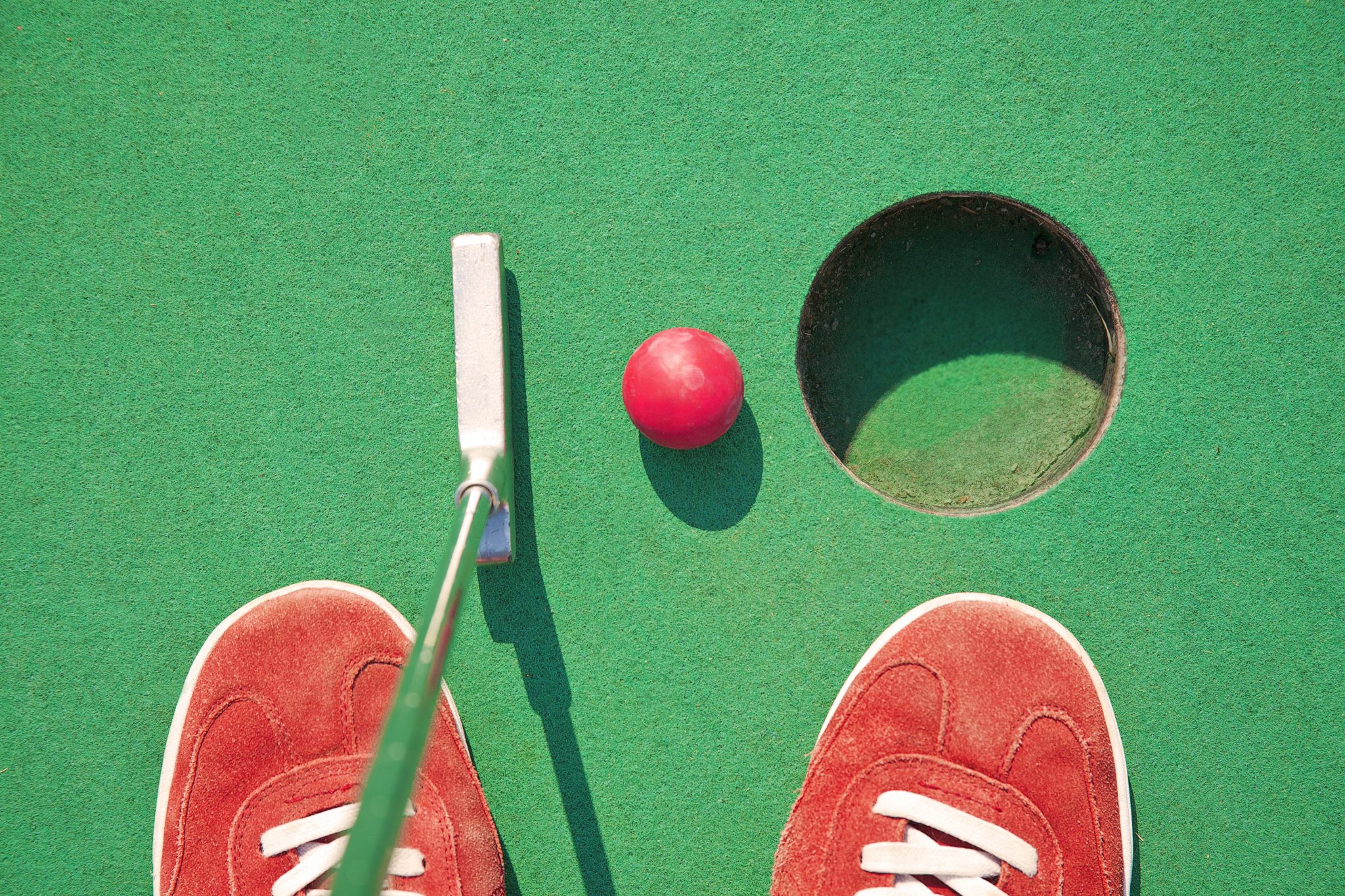 Following “Par Excellence Redux: The Front 9,” the second half of the exhibition, entitled “The Back 9,” pays homage to “Par Excellence” (1988), an artist-designed mini golf course created by sculptor Michael O’Brien and several other Chicago-based artists at the School of the Art Institute of Chicago before it became a national phenomenon. Blurring the lines between art and recreation, the eighteen-hole playable work of art shifts away from a traditional museum visit, instead providing an experience. Christopher Jobson, exhibition curator and Colossal editor-in-chief and John McKinnon, executive director of the Elmhurst Art Museum, discuss the “Par Excellence Redux” exhibitions from concept, to design, to execution. 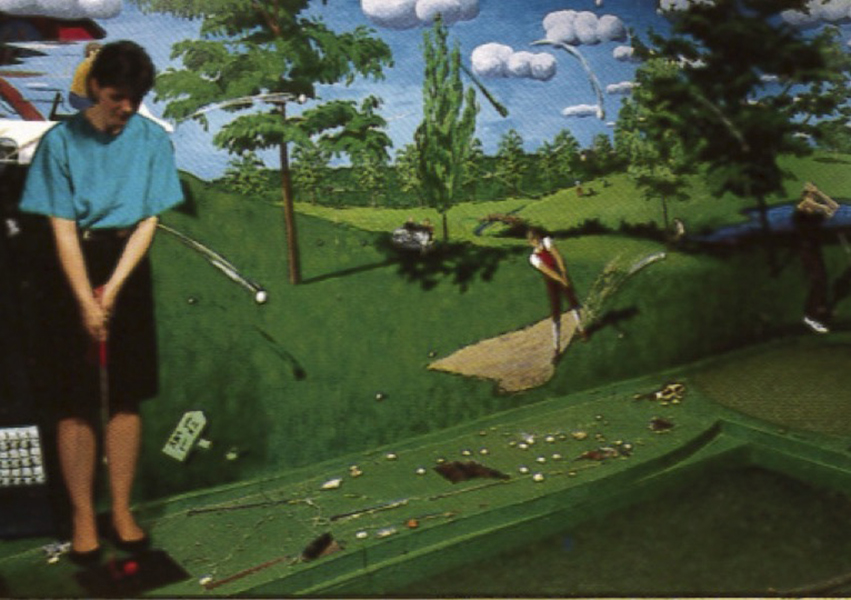 1988 ArtGolf Brochure, via “Par Excellence Redux: The Front 9 and The Back 9,” Elmhurst Art Museum

Tell us about the “Par Excellence” exhibition, then (1988) and now?

John McKinnon: I originally heard about the show about five years ago from Mark Pascale, a curator at the Art Institute of Chicago. He and his wife, Susan Matthews, made a golf hole and many other fellow artists came up with creative spins on the popular pastime. His telling of the original show was so infectious, I circled back a few years later. I learned more about the “Par Excellence” exhibition, which was started at the School of the Art Institute by artist Mike O’Brien, traveled to the Illinois State Museum in Springfield, and then O’Brien continued its run as a business called ArtGolf for about four years. With the Elmhurst Art Museum in mind, Christopher Jobson and I met with Mark, Susan, and several other key organizers of the 1988 course. They shared stories about the course, its warm reception, and we asked their thoughts on what it might look like to reimagine today. They originally held an open call, which made sense to us, too.

Christopher Jobson: One of the first times I visited the Elmhurst Art Museum was to see “Kings & Queens: Pinball, Imagists and Chicago” back in 2017. To see artwork from the Imagists juxtaposed with playable pinball machines struck me as a novel and fun way to stage an interactive art exhibition. Not long after, I connected with John [McKinnon] for the first time and he mentioned “Par Excellence”—it was an instant yes. The show carries the torch across thirty-three years from the Art Institute to the Elmhurst Museum while honoring the curatorial vision of Mike O’Brien along with feedback, inspiration, and help from several of the original artists. 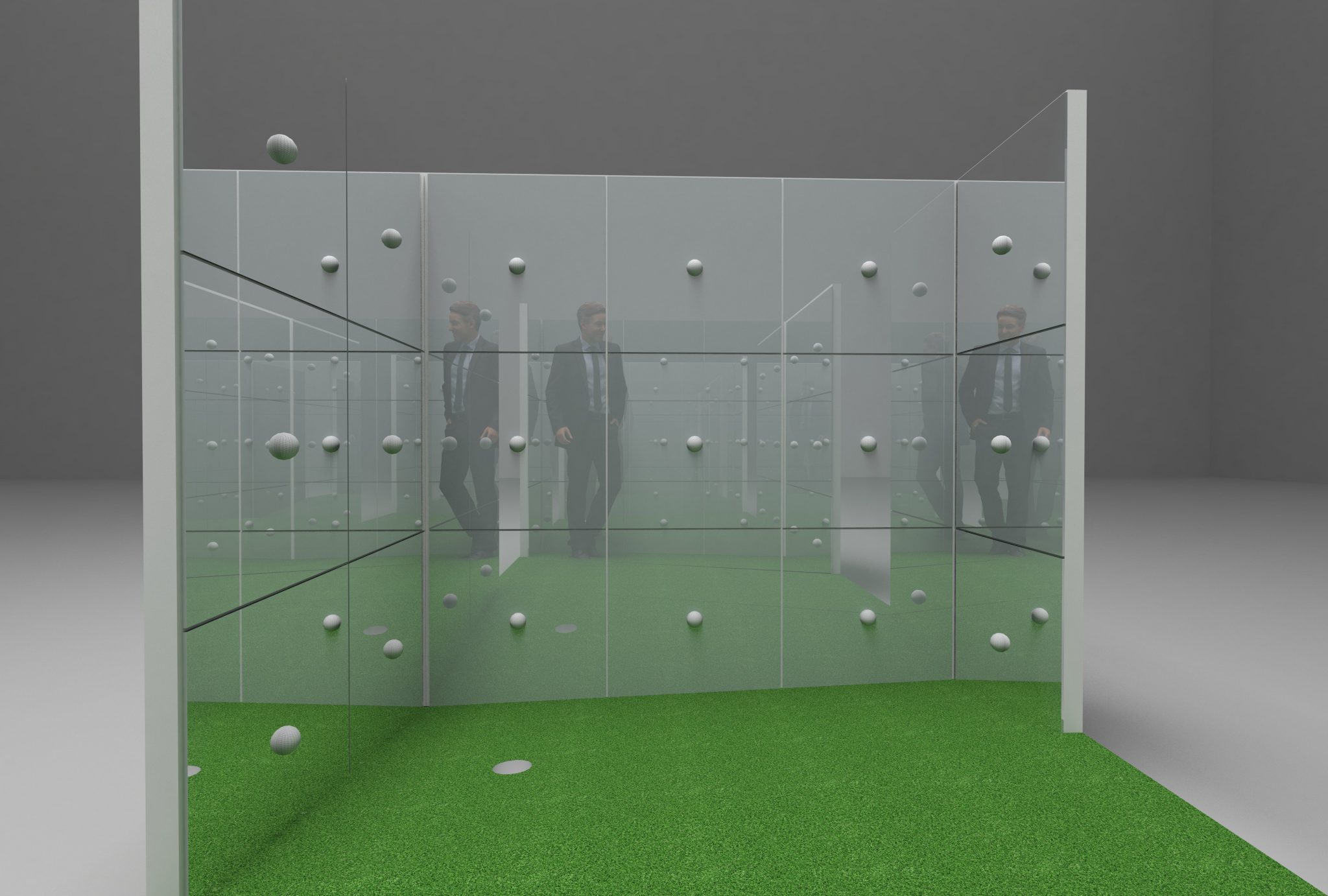 Can you talk about designing the exhibition from a curator’s perspective? What were the biggest challenges you had to face?

CJ: Having never curated an artist-designed mini golf course, we were essentially starting from scratch. Luckily, the open call produced dozens of extremely original ideas, and we were able to reference both images of the previous exhibition while exploring existing work of participating artists to arrive with a selection of work we felt excited about.

JM: The museum has faced numerous challenges for this custom-made exhibition, including a major postponement due to COVID. The course was originally set to open May of 2020 and many artists stopped their planning process in March of that year. When forecasting for 2021, we ran several scenarios with our staff and the artists about possible protocol and logistics. One decision visitors will see is the course split up into “The Front 9″ in the summer and “The Back 9″ in the fall. “The Front 9″ turned out to be a great way to bring people back to the museum after we fully reopened! “The Back 9″ includes more hands-on mechanical pieces, as well as more group and family events. 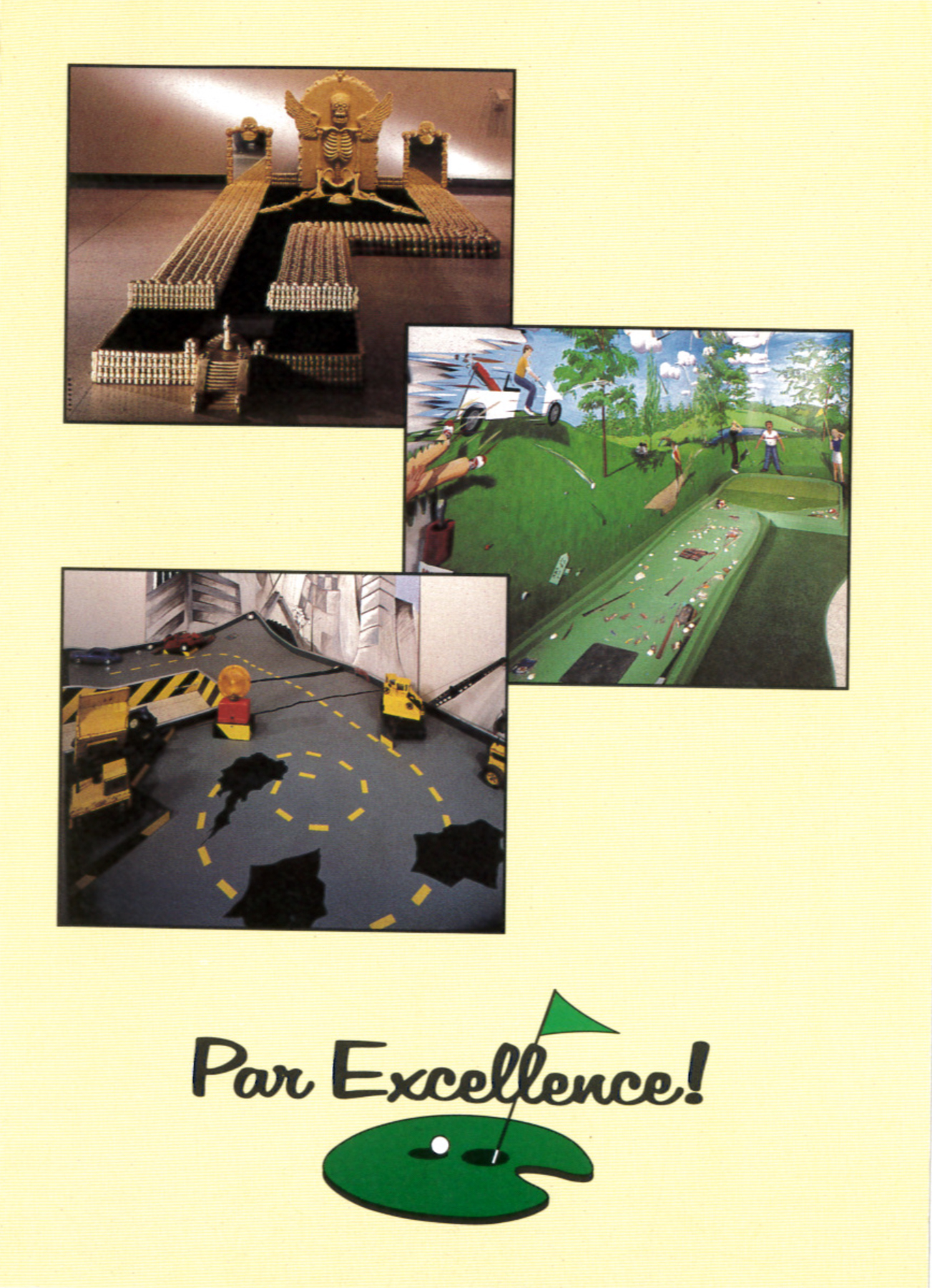 The exhibition is the outcome of a public call for proposals for local artists, designers and architects. Can you talk about the importance of engaging the creative community especially at a time of a global pandemic?

CJ: Many of the designs were partially if not completely built pre-pandemic, so the Elmhurst Museum staff has essentially produced this show twice now due to the abrupt shutdown last year. To offer the community a fun, safe, recreational activity as respite from months of quarantine feels like an added degree of poignancy for the exhibition.

JM: The designs were selected before the pandemic, but that didn’t stop our staff, who self-produced videos all throughout 2020 and 2021 for our “Museum From Home” initiative. It didn’t come to this, but we were ready to instruct kids and adults on how to create their own homemade mini golf holes at home (admittedly I did that with my family when I was younger). 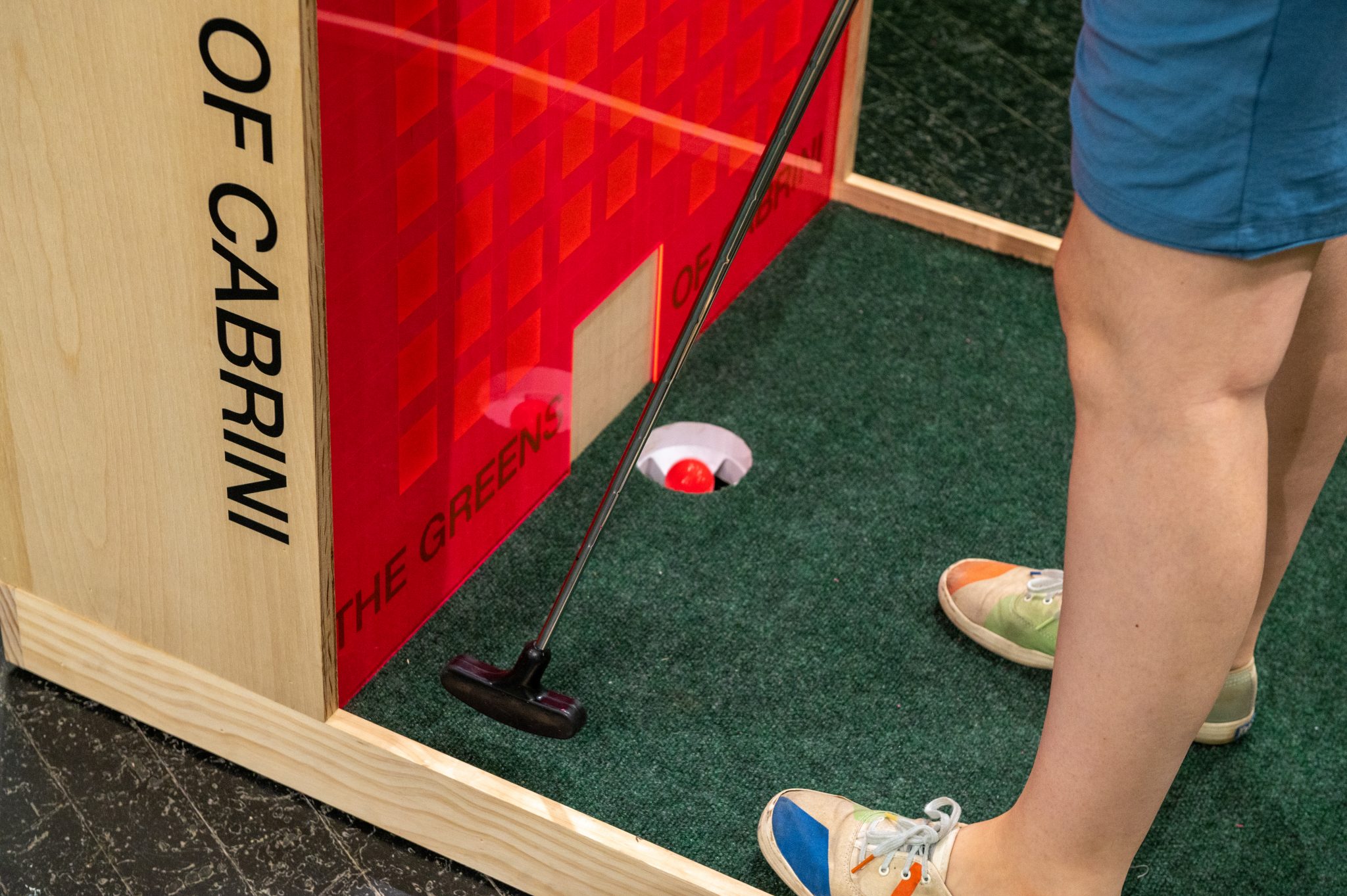 A golf course of playable works of art is the perfect way to bring together recreation and art but also to convey more serious messages—themes range from social justice to the occult. What are you hoping the viewer will take away from this exhibition?

CJ: At Colossal, and if I can speak for the Elmhurst Art Museum, we have a shared mutual value of exploring what art can be—how designers and artists manifest their perception of the world as architecture, in a painting, a sculpture, a pinball machine, or even a golf hole. I hope that by highlighting these unexpected and novel forms of expression, we push viewers to do the same, to question how they can express their own ideas in new and unexpected ways.

JM: This participatory exhibit helps break down barriers we often face when seen as a traditional museum space. Plus, the artist-designed mini golf course is a perfect reason to come together for a group activity—especially away from screens. As people have adjusted their habits in the last year, they may not have visited a museum in some time. So we hope this show will reintroduce us in a strong way and really strengthen our position as a cultural and community hub.