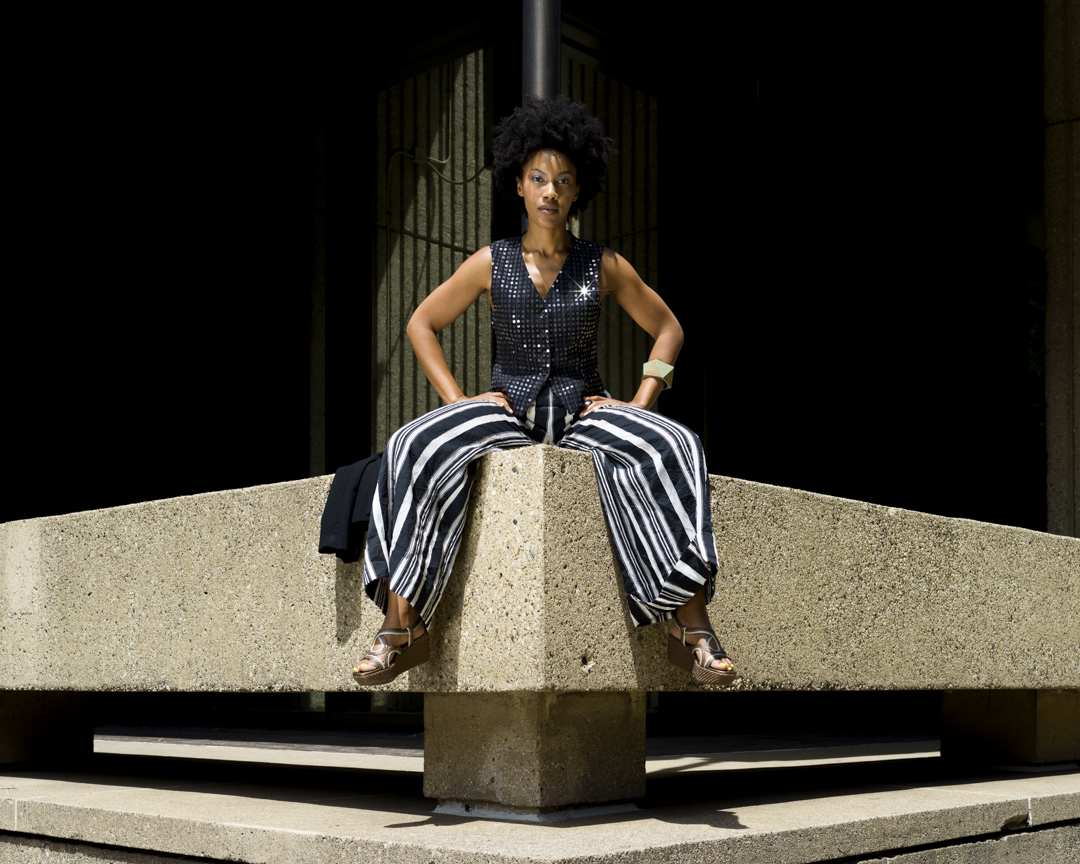 Clarissa Bonet has been exploring urban space in both physical and psychological contexts for over a decade. Turning her lens toward the milieu in which we live, Chicago’s urban landscape, her photographs are proof that there is beauty in the mundane. The widely exhibited artist, whose work is part of the permanent collections of museums nationwide, talks about her latest project: a 1970s-inspired photoshoot that brings together fashion and architecture. Bonet collaborated with Chicago-based actress and model Jessica Gillespie and modern vintage clothing, denim and accessories brand, Some Like Us, to reimagine a woman on the go. The perfect backdrop? The city’s Brutalist architecture. 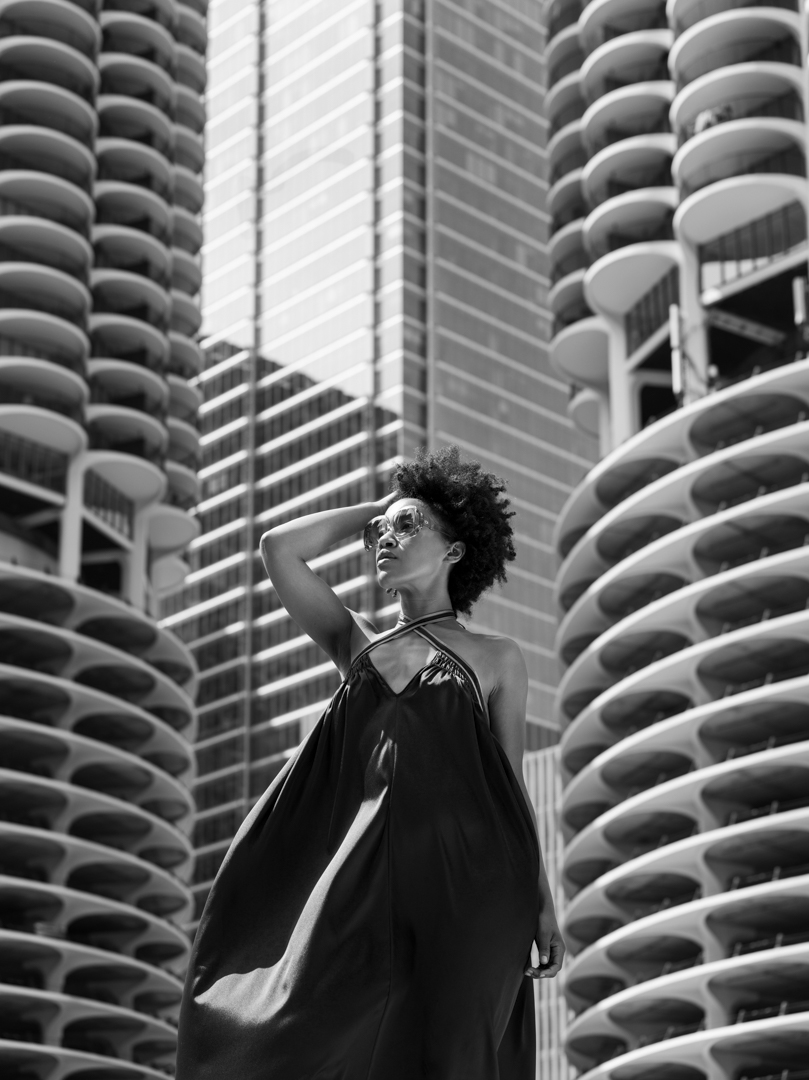 Tell us about your work. Where do you draw inspiration?
Over the past decade, my work has been focused on translating the pedestrian experience of the built environment. Walking and experiencing the city on foot is a big part of my practice and is deeply inspirational. On these walks, I find interesting locations, people and experiences that I record in my sketchbook and through snapshot images using my cell phone. I then pull from these sources in combination with research when I am planning my shoots.

You explore urban space in both a physical and psychological context. Can you talk about the connection between fashion and the built environment in light of the Some Like Us 1970s couture photo shoot?
Fashion, art, and architecture inform each other. For this project, we wanted to shoot on location with local actress and model Jessica Gillespie. After seeing the looks that Some Like Us pulled, I set out to find locations around Chicago that complemented the clothing, beginning with a loose idea of correlating the fashion to be photographed with the iconic styles of the 1970s. Naturally, I gravitated toward the city’s iconic architecture, and settled on Brutalism, which was a prominent style until the mid-1970s. This was a fitting backdrop for the clothing, as there is often a visual correlation between the silhouettes of iconic fashion design of an era and the era’s architecture. In this case, commonalities include a geometrical graphic quality, bearing the structural element as the decorative style. What’s more, the movement has come roaring back and, according to experts, is fashionable again. 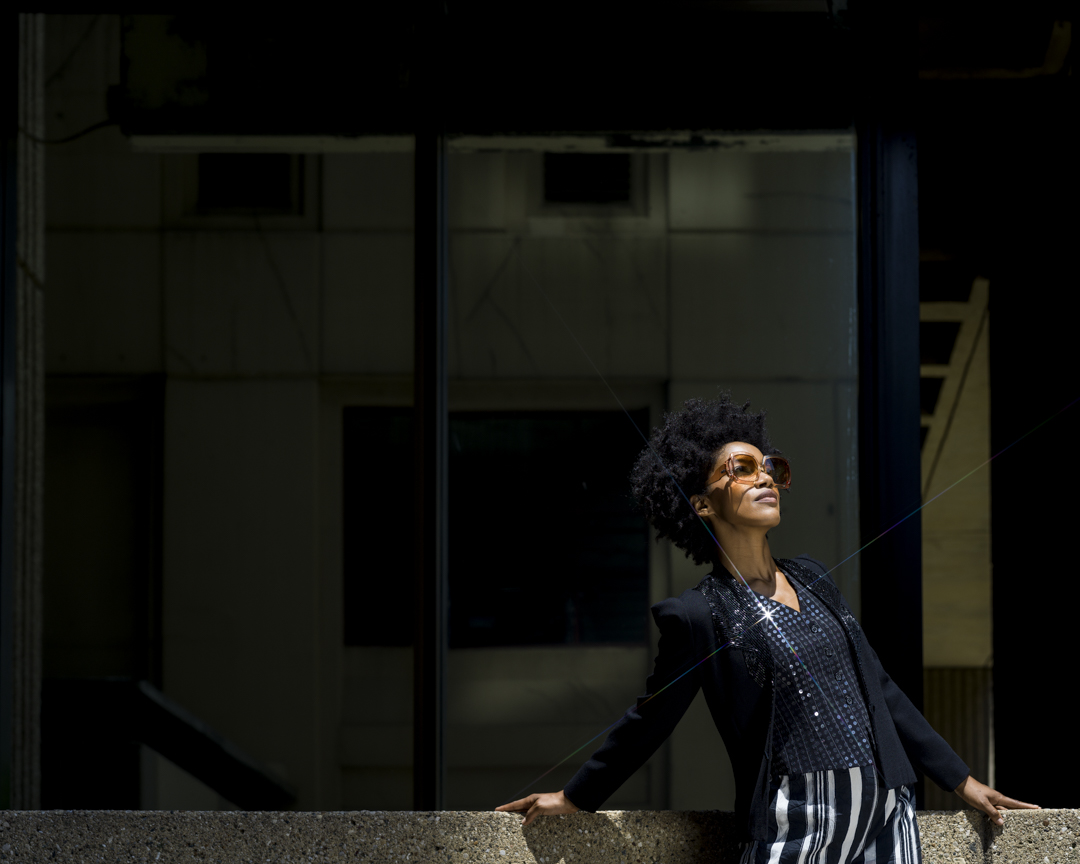 The largest challenge I thought we might face was having an issue accessing some of the iconic buildings. I tried to choose locations where we could gain access via public space, or where we could shoot from a distance so we didn’t have to deal with permits. Thankfully, we didn’t run into any issues and the whole shoot went off without a hitch.

I worked with natural light only for this shoot, which is my preferred way of working, weather permitting. Working with the sun at the right time of day is advantageous, but can also present challenges. I strongly prefer to time the shoot precisely so that the architecture is lit up with natural light, creating a stage-like setting for the images to unfold upon. This enables sequins on clothing to sparkle just right for the photo! 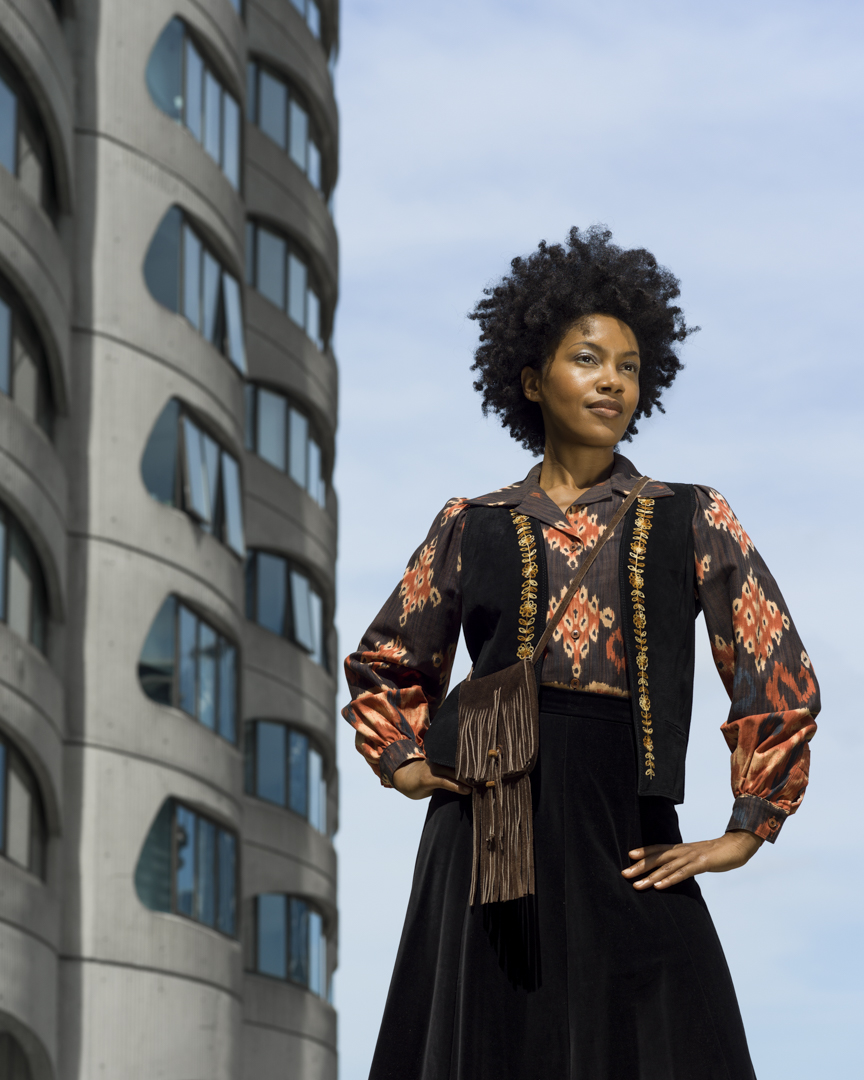 Chicago is a haven for creative entrepreneurs. In what ways has the city itself influenced you creatively?
Chicago has been deeply inspirational to my work and practice as an artist. I moved to Chicago from Florida over a decade ago and was instantly entranced by the city, its people, and the built environment. These were all radically different from my experience living in the lush, tropical environment of Florida. For the past ten years, I’ve used my camera to explore, investigate and better understand the city. In addition to Chicago being a rich source of inspiration for my work, it’s also a relatively affordable city in which to be an artist or creative. I’ve been able to make a life for myself here, whereas that might not have been possible in one of the larger coastal cities because of the high cost of living. 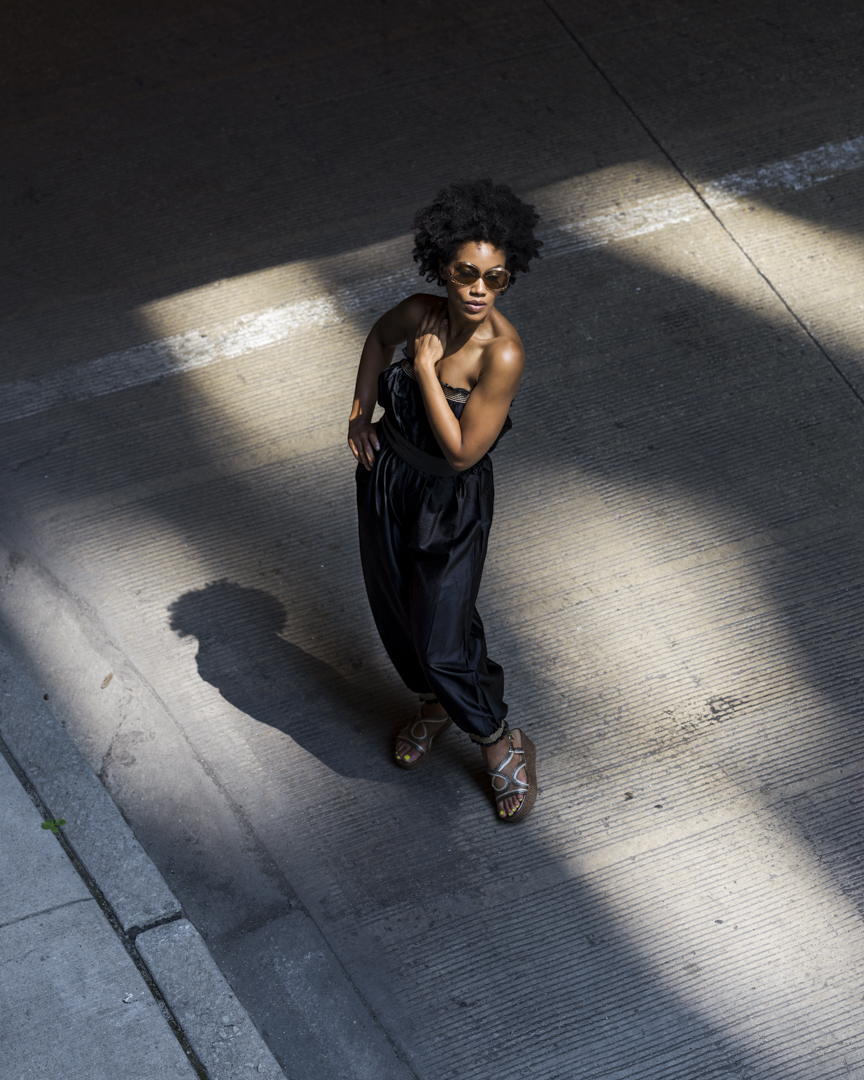 What are you most excited about moving forward?
Artistically, the pandemic disrupted my practice as I was unable to continue making work in public space for much of 2020. This disruption provided the room to experiment with new ways of working, a fresh rich territory to explore. I’m looking forward to continuing to push my artistic practice forward through these new ways of working. Commercially, I’m feeling inspired about an upcoming commission for a well-respected architectural firm. I can’t say much about the project, as we are still in the planning phase, but I’m very much looking forward to photographing their beautiful buildings!