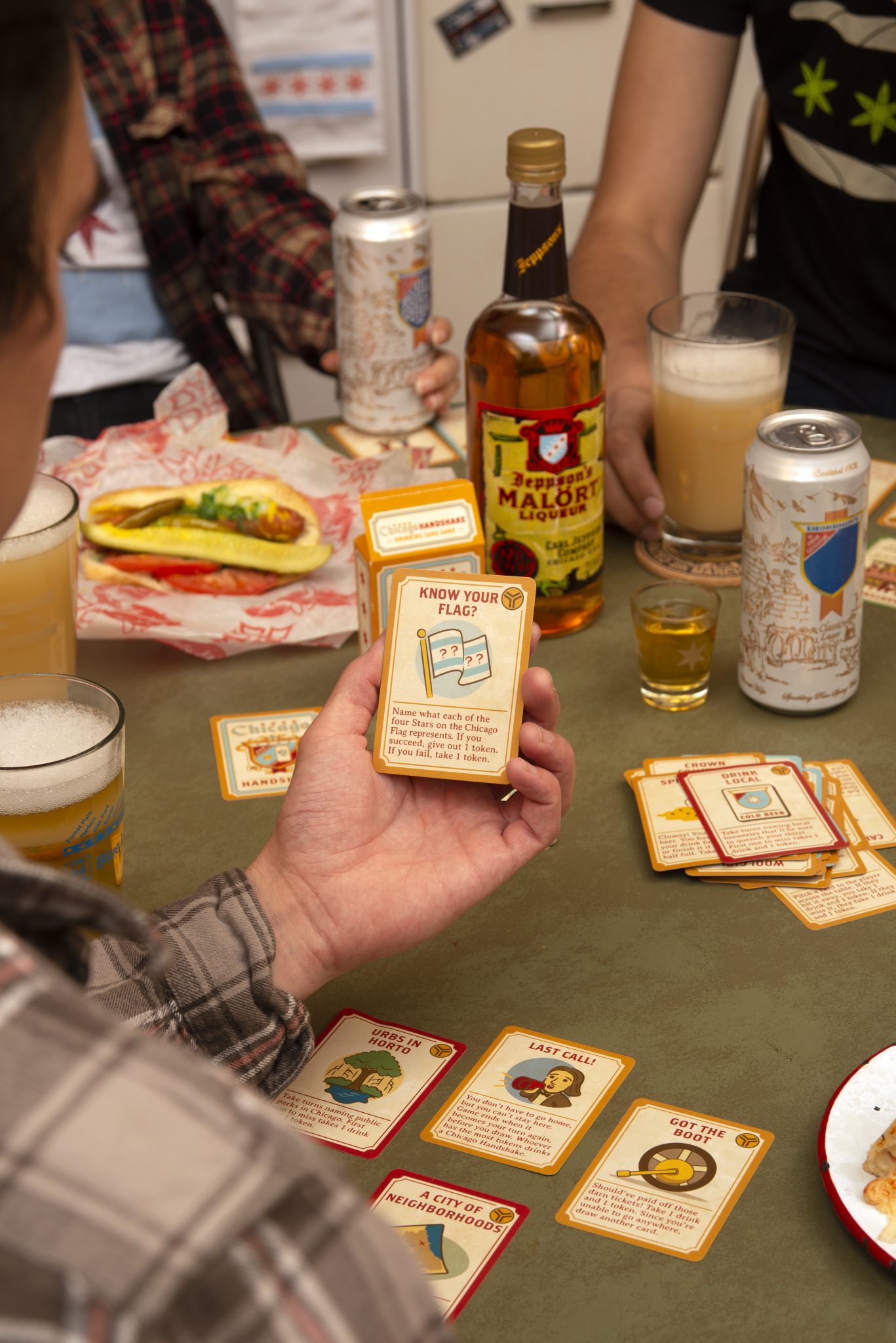 Chicago’s history, culture and the city’s most controversial liquor, the infamously bitter Jeppson’s Malört, all come into play at the Chicago Handshake—a drinking card game that takes its name from a local tradition involving a shot of Jeppson’s Malört and an Old Style tallboy.

More than putting one’s knowledge to the test with trivia questions ranging from food to the blues, to architecture and to booze, the game isn’t simply for locals who wish to sharpen or expand their Chicago general knowledge—it also serves as one of the most genuine ways to get to know the city better. “Indeed,” says Tim Gillengerten, owner of Transit Tees, the boutique T-shirt company and design studio known for Chicago-inspired clothing, accessories and home goods, that’s behind it all. “The cards will not only challenge the players’ knowledge of Chicago, but will help them learn more about the city from their friends. It will be sure to spark up conversations and memories about the city’s history, traditions and local lore.” But most importantly, “The game also serves as a great way to welcome your friends to the city and warm them up before they take their initiation shot of Jeppson’s Malört.” 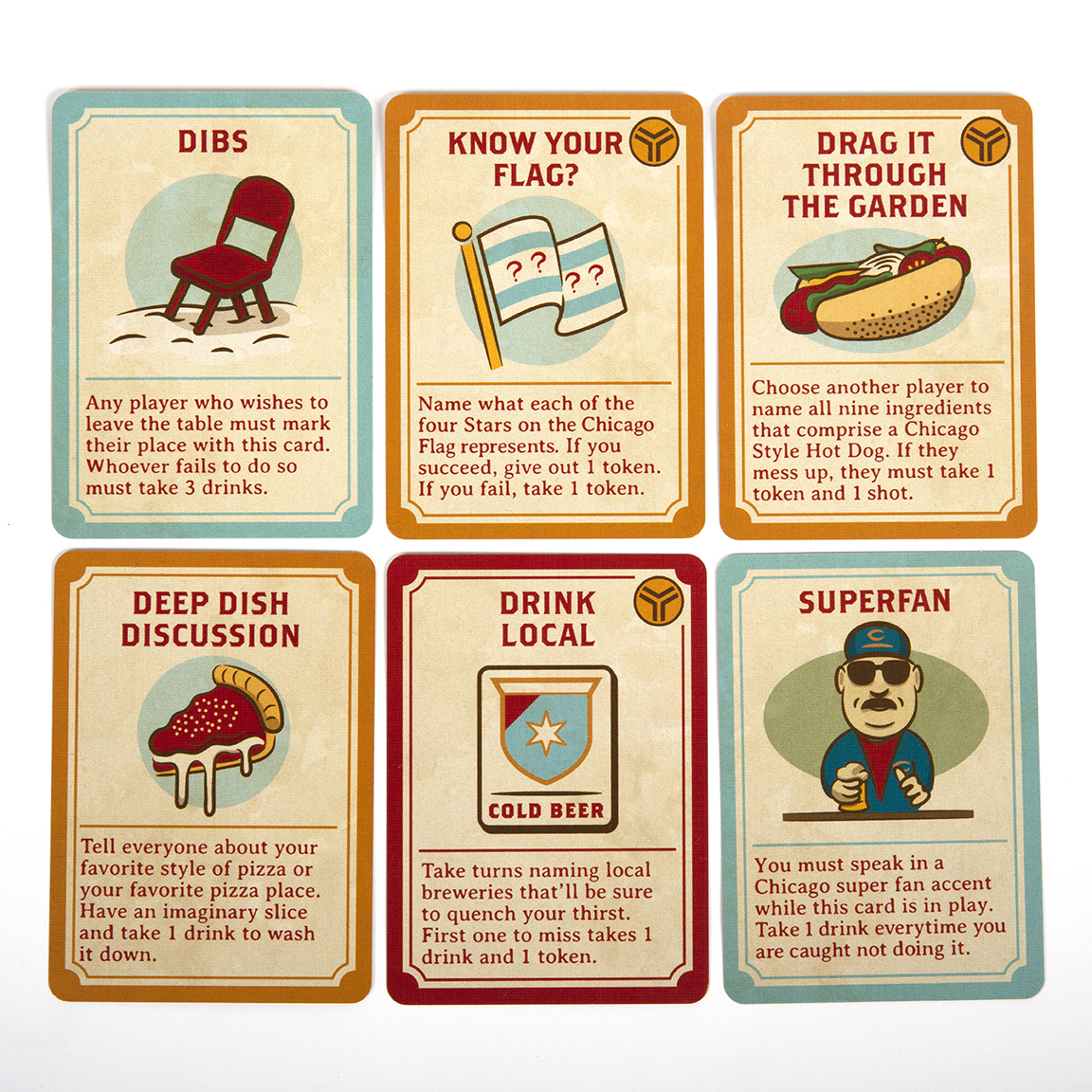 The setup is simple. Step one: Make sure everyone has a beer or something else to drink while they play. Step two: Put a tallboy and a shot of the wormwood-based liqueur (that was sold as a medicinal alcohol during Prohibition) out on the table so everyone can see what’s at stake. Step three: Shuffle the deck and go.

“The game works a bit like the popular drinking games ‘Kings’ and ‘Circle of Death,’ where players take turns flipping over a card and performing the action or challenge stated on the card,” says Kyle John Hollings, art director at Transit Tees, who designed the game. “The cards in our game consist of a mix of card types, ranging from themed categories, varied events, and cards that have a persistent effect on the player who drew them.” Think: “Speak in your best 1920s mobster accent,” “Take turns naming local breweries,” “Name the highways that run through Chicago—by name, not by number.” The game ends when either the “Last Call” card is drawn or when a player collects seven tokens. Said player must then proceed to drink a Chicago Handshake—a curse or a blessing, depending on your drinking preferences. 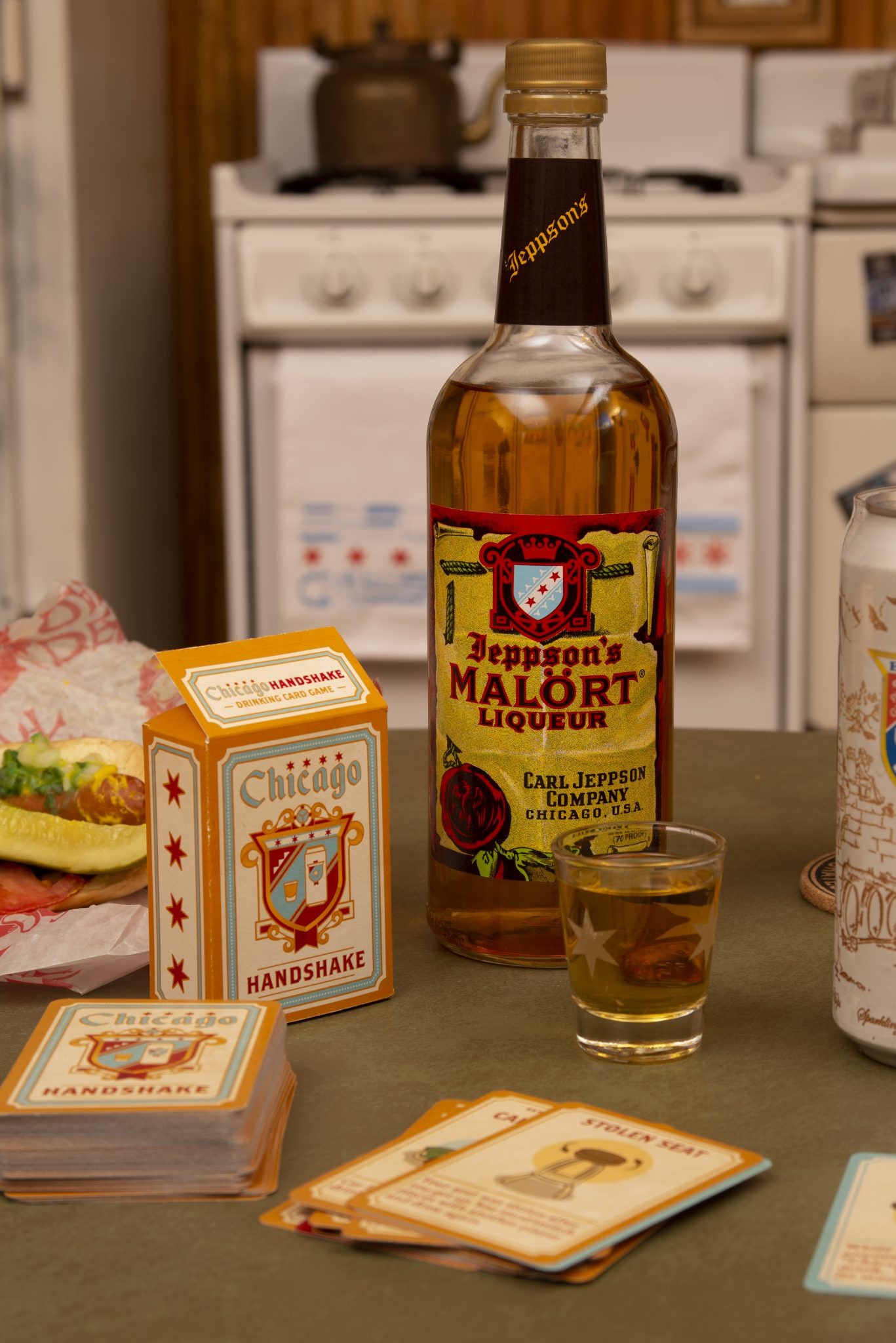 “We are constantly pulling ideas from everything that has to do with Chicago,” says Hollings. “We got inspiration from our experiences at bars and drinking with friends. We also drew on experiences ranging from our memories to our love for everything Chicago. We found fun ways to implement our favorite classic commercials, local food staples, architecture, sports, music, Chicago icons and everything between.” Everything is fair game hence putting your knowledge to the test goes well beyond the ingredients of the Chicago-style hot dog—from your Chicago-themed tattoos, to the philanthropic polar plunge, to our very own “Tamale Guy,” to dibs (holding a shoveled-out parking space after a heavy snowfall by putting chairs, laundry baskets or other items in the street to mark the claimed space), to the legalization of marijuana, to that commercial jingle you can’t stop humming, to the mayor herself. 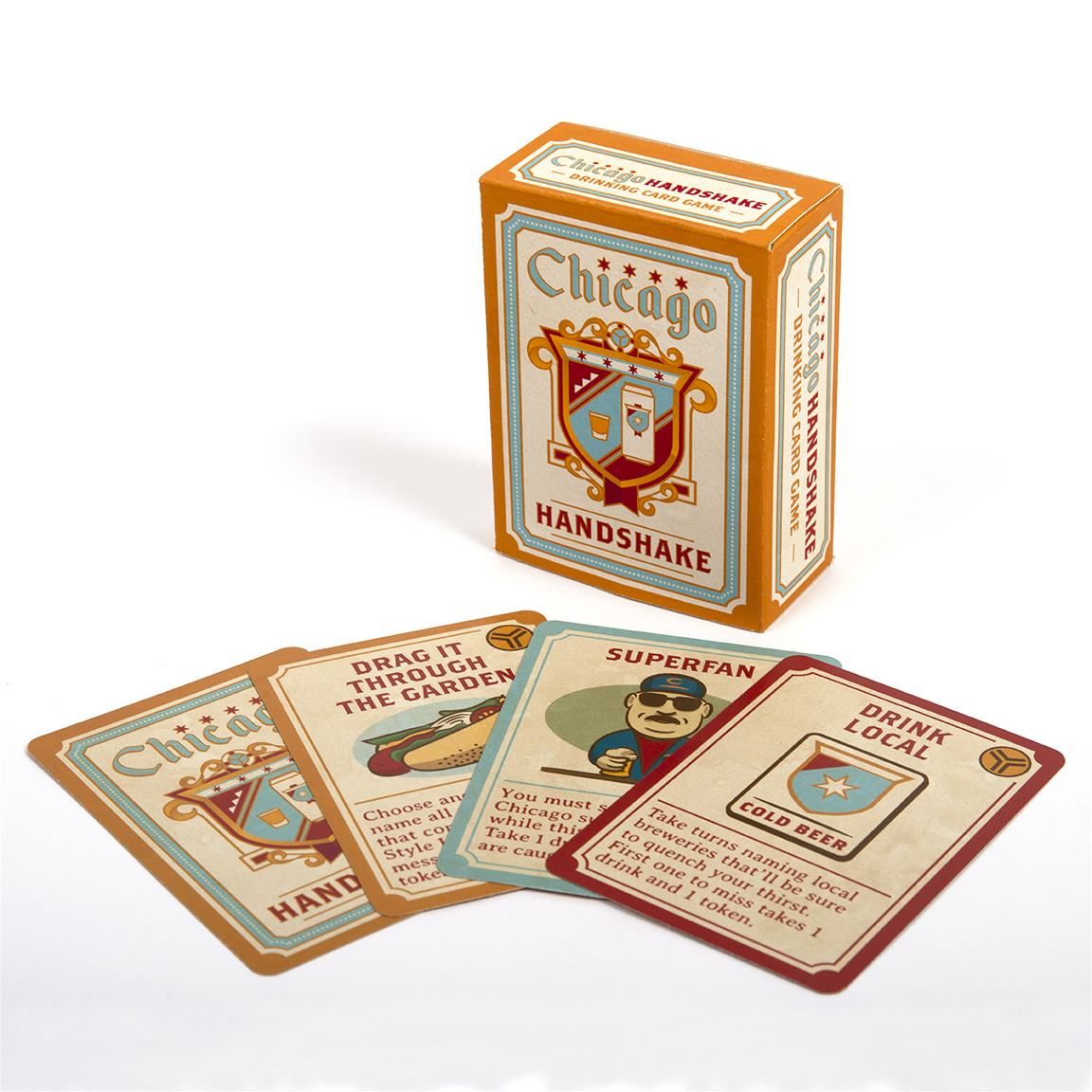 Adding a dash of nostalgia to the playing experience: the game’s retro design style. “I had already concepted and designed a Chicago Handshake graphic after being inspired by the Old Style and Jeppson’s Malört shields,” says Hollings. “It felt like a natural fit to carry over the name and the overall vintage look and feel to our drinking card game concept. I thought the style resonated with the intricate handcrafted wooden bars, mirrors and signage found in old Chicago taverns and bars,” he says, adding that the illustrations were inspired by advertising graphics from the 1920s and 1930s.

Both concept and design make Chicago Handshake a drinking card game that’s practically begging to be played atop a sticky dive-bar table amid cheap beer and empty shot glasses while the decades-old jukebox blares old rock tunes. But alas, the pandemic upended all normal routines in our lives including squeezing into a tiny booth with two or more Chicagoans (or wannabes) of legal drinking age. 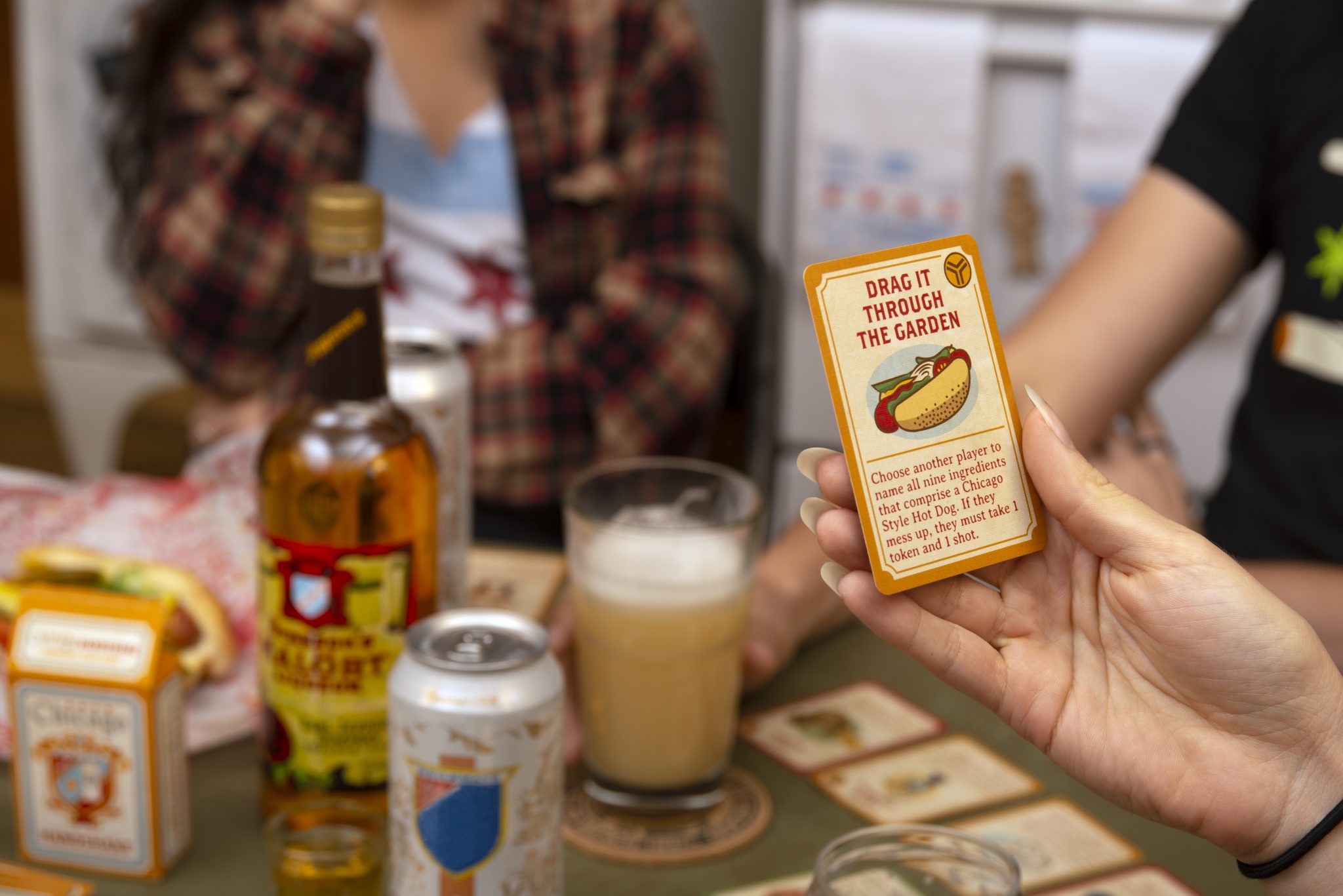 Drag it Through the Garden card from the Chicago Handshake game/Photo: Transit Tees

Gillengerten weighs in: “We created pencil concepts for this game at the end of 2019 and planned on launching it in the summer of 2020 only to realize (in March of 2020) that with the lockdown, we would not be able to launch the game until friends were able to get together again,” he says. “Since then, we continued fine-tuning the concept, play-testing it through Zoom and prepared for a 2021 launch. Finally in October of 2021, with friends and family within our bubbles, we decided that it would be the perfect time to celebrate together again,” he says. “Drinking has been a popular activity over the past year, and now we can do it with our favorite pals, laughing and enjoying Chicago trivia with the Chicago Handshake.”

Beyond that, the game provides a rare opportunity to watch someone you know drink the polarizing absinthe-like local elixir—a taste of legendary Chicago hospitality that whether good or bad, is sure to be memorable. May the real Chicago hardcore fans shine.