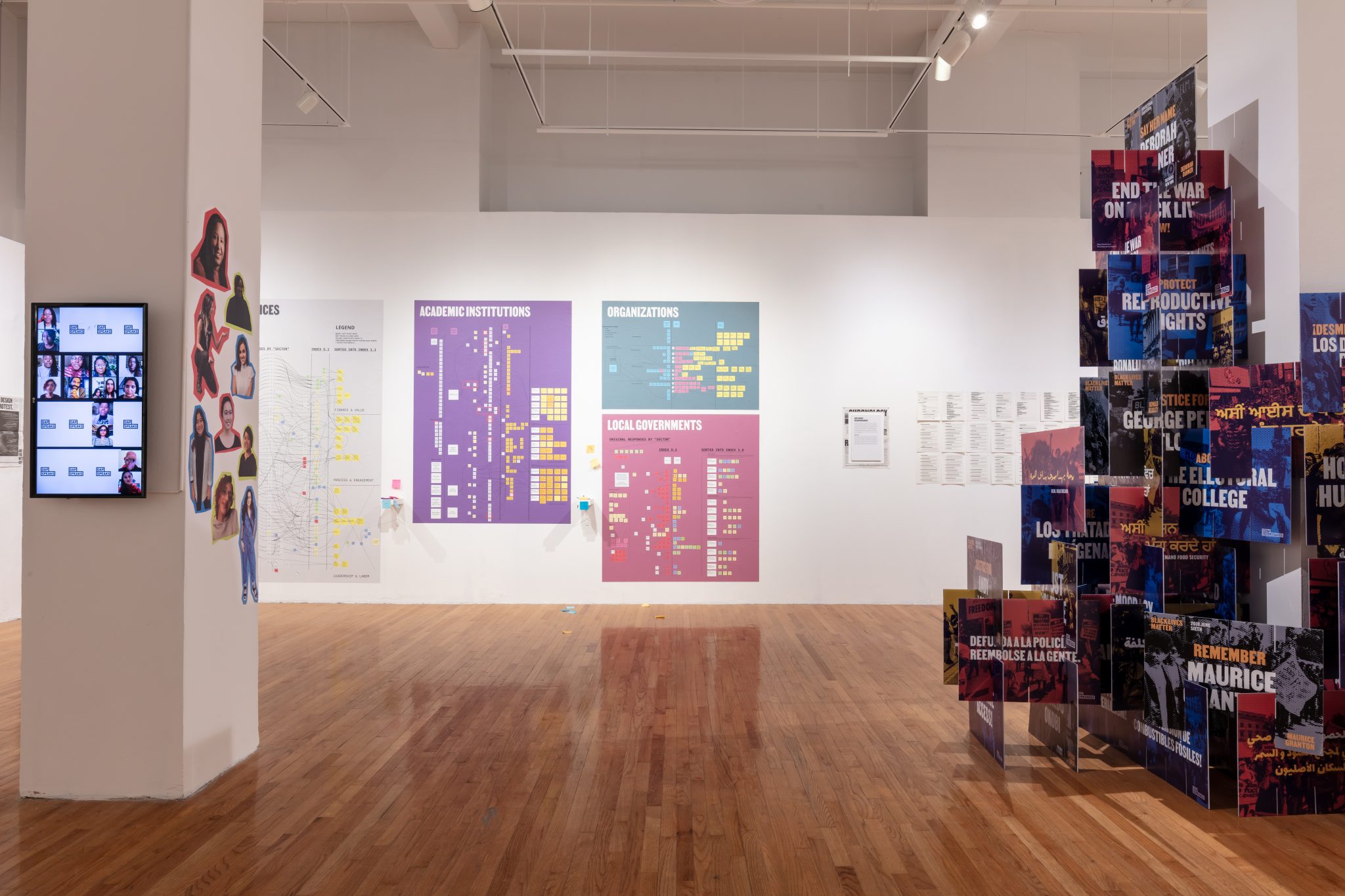 Design As Protest, “YOU ARE A(NTI)RACIST” exhibition, 2022. Glass Curtain Gallery

Built to hold the design profession accountable to reverse the violence and injustice that architecture, design and urban planning practices have inflicted upon Black people and communities—especially those which have been historically oppressed or underrepresented—Design As Protest (DAP) believes in using collective power to bring about change. Co-organized by BIPOC designers, DAP is a nationwide effort meant to dismantle privilege and power structures that use architecture and design as tools of oppression one neighborhood, city, state at a time. Dave Pabellon, assistant professor of graphic design at Columbia College Chicago, whose research explores design labor as a tool for solidarity and movement building, and Michelle Lin-Luse, DAP Collective organizer and landscape architect whose design practice brings together backgrounds in ecology, art and advocacy, talk about creating spaces and places that support, inspire and elevate, operating from a place of hope and joy, and the importance of taking a fearless stance to help designers stand up, fight for and build a more just future for all. 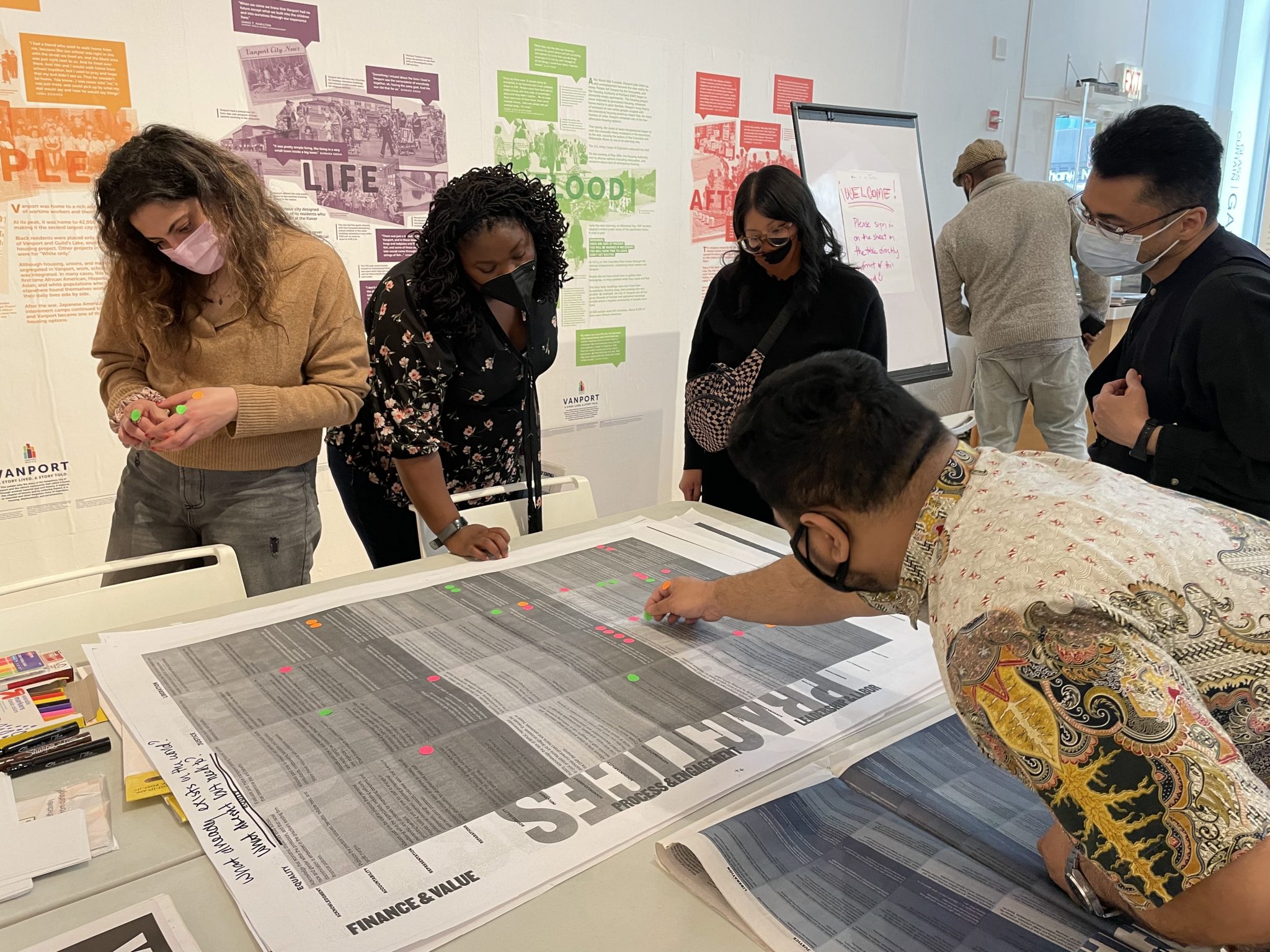 Can you tell us about the work you do within Design As Protest (DAP) and what it means for Chicago specifically?

Dave Pabellon: The DAP (Design As Protest) Collective is a BIPOC-led, anti-racist, non-hierarchical, action-based collective dedicated to advancing Design Justice in the built environment. Started in 2015 and reactivated as the DAP Collective in June 2020, DAP organizers engage virtually and in-person across the United States, the United Kingdom and Canada.

I serve as one of many core organizers in DAP, nationally. Some early contributions in 2020 looked like assisting and contributing in grassroots organizing with the aid of technology. With lockdown in place at that time, our collective was able to work intercontinentally, rapidly and fluidly through the use of online platforms such as Instagram, Slack, Miro, Adobe Creative Cloud and Notion. I utilized my skills and experience as a graphic design practitioner to assist in the design and project management of Anti-Racist Design Justice Index Newspaper, which was produced collaboratively and virtually with over sixty-five Collective contributors and was published in the beginning of 2021.

Recently and locally, I have been representing DAP via curation of our exhibition “YOU ARE A(NTI) RACIST,” hosted at Columbia College Chicago, presenting at professional conferences such as NeoCon, and contributing to community-based architecture and design events such as Overton Community Days. None of these physical events would have been made possible without the network, support and solidarity established online with the greater collective.

Michelle Lin-Luse: The structure of our collective allows flexibility to engage in broad initiatives, such as the ARDJI [Anti-Racist Design Justice Index, Acknowledgement, Accountability, Representation, Reparations, Accessibility and Influence], down to local actions led by designers in specific cities and communities. All scales of actions are guided by DAP’s Design Justice Demands. For example, members based in New York City are investigating the correlation between hostile architecture, homelessness and public health throughout New York City’s public realm in order to advocate for policy changes. Here in Chicago, DAP members joined Families for Justice as Healing (FJAH) to stage a protest in front of the offices of HDR, Inc., an architecture firm that has designed over 275 jails and prisons, during the American Institute of Architects’ (AIA) annual conference, to demand the withdrawal of all of HDR’s new plans to design and construct new carceral facilities. 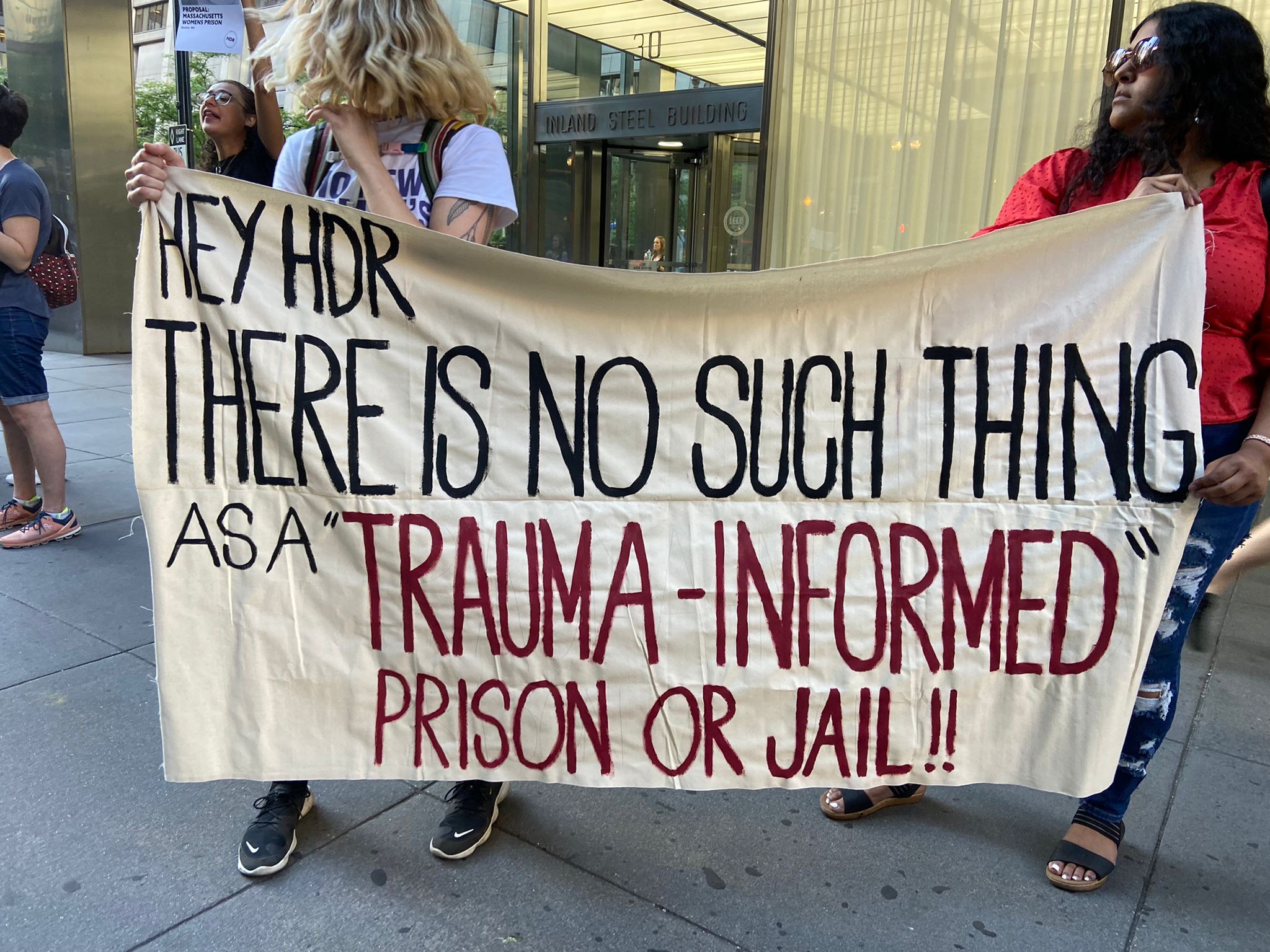 Design As Protest activists protest outside the Chicago offices of architecture and design firm HDR Inc. on June 24, 2022. Two activists are holding a white banner that reads, “Hey HDR, there is no such thing as a ‘trauma-informed’ prison or jail!”

What keeps you motivated?

DP: Although we are in transition as an organization, balancing online organizing and physical action, I’m motivated when I see fellow collective members making work in their geographical areas and arenas. It reminds me that even though I might not practice in the same field or the same city, that there’s support, love and communal energy out there.

MLL: I agree with Dave and am amazed by what other DAP members are doing every day. This gives me a lot of drive to keep pushing, just knowing that folks are out there even if it sometimes feels like our numbers are small. To paraphrase movement ancestor Grace Lee Boggs, movements are born of critical connections rather than critical mass. Grace taught me the importance of being in community with other folks.

What is the greatest challenge you had to face?

DP: I think our greatest challenge is yet to come. We have produced the language, tools, people and even the suggestive steps of implementation to create liberation but we have yet to see it fully activated. For the past two years there’s been a captive design audience willing to listen and absorb to the demands we have set forth, but we have yet to see the integration and acceptance of those demands into our professions, that is and will continue to be the greatest challenge.

MLL: We are in the midst of the greatest challenge. We see folks who say they want to be allies against oppression but we are not there yet. Folks have learned the language of progressives but are they willing to truly relinquish control and power? 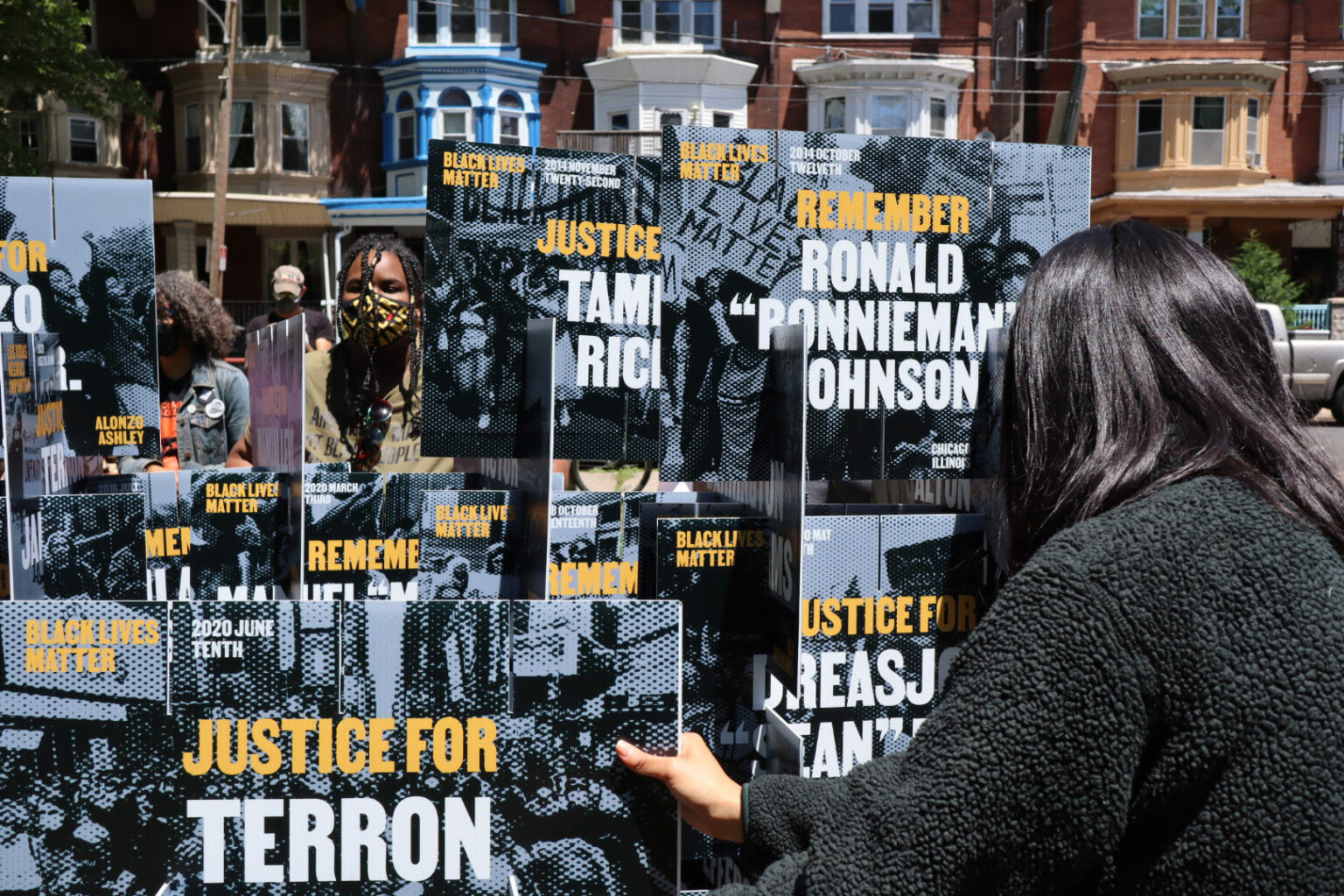 What does a just, equitable future look like and what are some ways one can support DAP and bring change—both inside and outside of the design community?

DP: I believe a just and equitable design future looks like one where the built environment doesn’t celebrate and distinguish a few, but creates spaces and places that allow all to be elevated, especially those that have been historically oppressed or underrepresented.

MLL: I would add that a just future also re-centers and repairs our relationship with the environment. Extractive capitalism and colonialism has convinced us that we are separate from the natural environment, when in reality we are inseparable. The DAP Collective has been drafting an expanded set of Design Justice Demands to include the urgency of environmental justice and climate change.

DP: If you are in the design community, some accessible and tangible things you can do is to go to the Anti-Racist Design Justice Index, open some tabs, locate your specific area of practice, and start holding yourself and place of work accountable. If you are outside of the design community but still want to bring change, go to the DAP Demands (dapcollective.com/demands), click on each, read them, and if you agree with them sign them and hold a standard for yourself as you interface with design, architecture and urban planning moving forward. 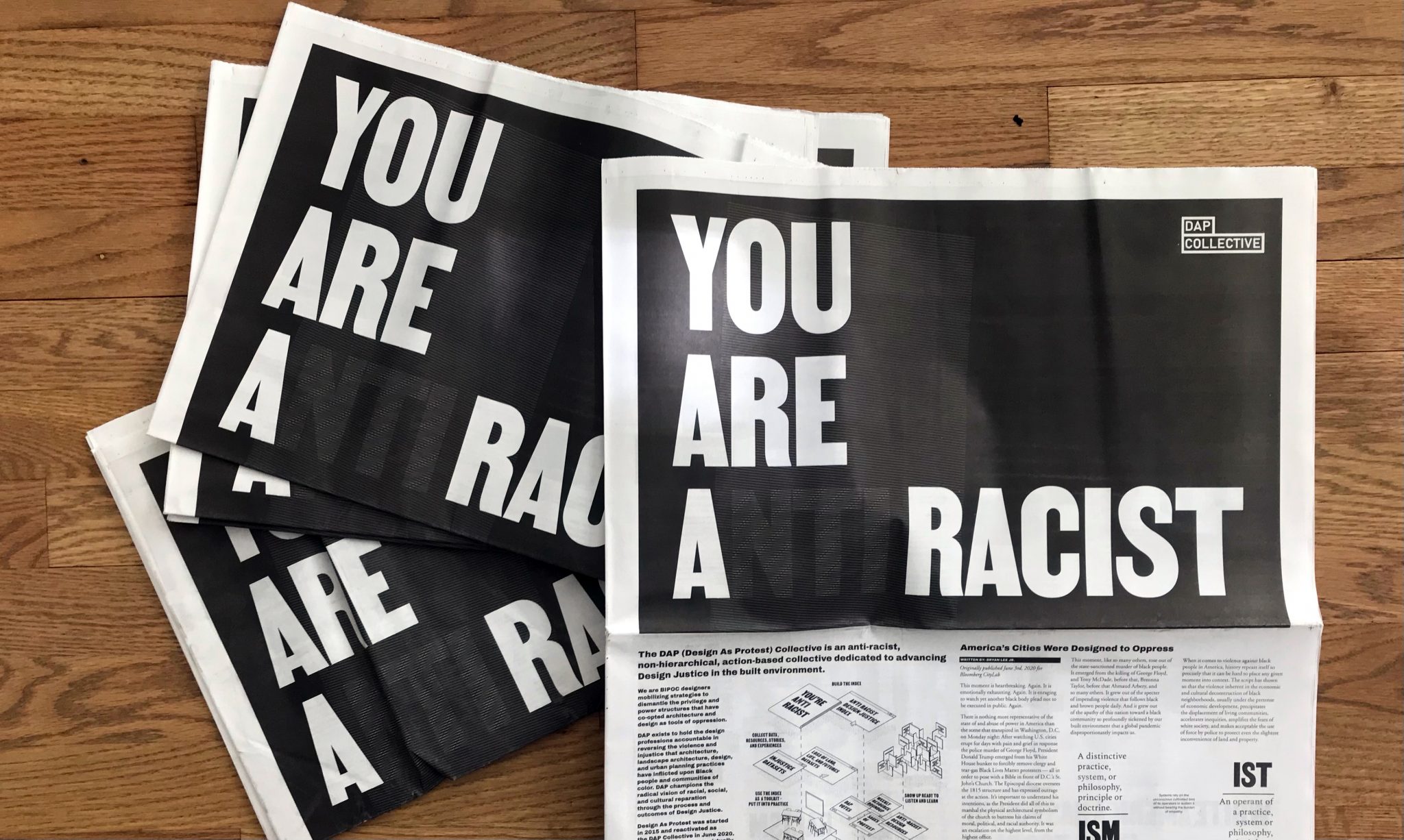 What’s the best piece of advice you can give to designers in order to rise up, overcome fear, and ultimately inspire others to do the same?

DP: I want to start by answering this question by addressing the topic of fear and our inclusion into the subject. Although Design As Protest may sound aggressive, I believe we operate and are organized from the antithesis of fear, that being hope and joy.

With that said I want to take a quote from a book that I found on a CTA train years ago, whose title is fitting, “Hope Dies Last,” by Studs Terkel.

“In all epochs, there were at first doubts and the fear of stepping forth and speaking out, but the attribute that spurred the warriors on was hope. And the act. Seldom was there a despair or a sense of hopelessness. Some of those on the sidelines, the spectators, feeling helpless and impotent, had by the very nature of the passionate act of others become imbued with hope themselves.”

MLL: I’ve learned that fear does not have to define who we are at our core, nor is it something that needs to be figured out on how to overcome. But this requires an active consciousness to see how fear is dictating reactionary responses, and that is a constant work in progress for me. In many ways, our society has created many walls in the built environment (literal and figurative ones) based on fear, resulting in misguided (at best) attempts for “safety” and “control.” Perhaps we need to unlearn our relationship with fear as part of our collective path to liberation, and I think creatives and artists have an idea of how to do this. As designers, if we actually succumb to every single one of our fears we simply wouldn’t be dreaming up anything new to begin with. So let’s use our skills and talents to build communities based on care, justice and healing—not perpetuate the status quo based on fear.