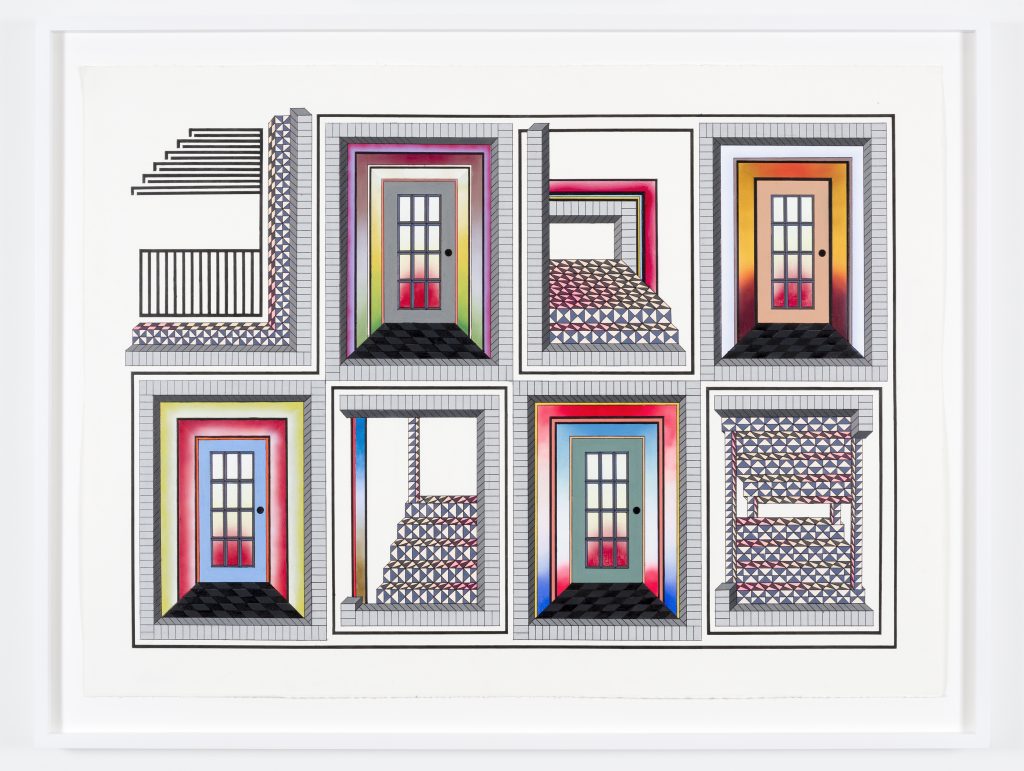 “Comics are woven into Chicago and its art history,” says comic historian and curator-at-large, Dan Nadel. “Newspapers nurtured the medium and some of its most profound practitioners in its early years, was a center of the underground comics world in the 1960s, and has been a hub for teaching and learning comics since the 1990s. Over the last few decades it’s really the city in the United States that has the greatest concentration of forward-thinking, skilled, and adventurous cartoonists,” he adds. Nadel, who brought to life the Chicago Comics: 1960s to Now exhibition at the Museum of Contemporary Art, is looking back at more than fifty years of comics history approaching the medium and the artists behind it: more than a way to entertain readers, comics are meant to engage them in the relevant social and political issues of their time. 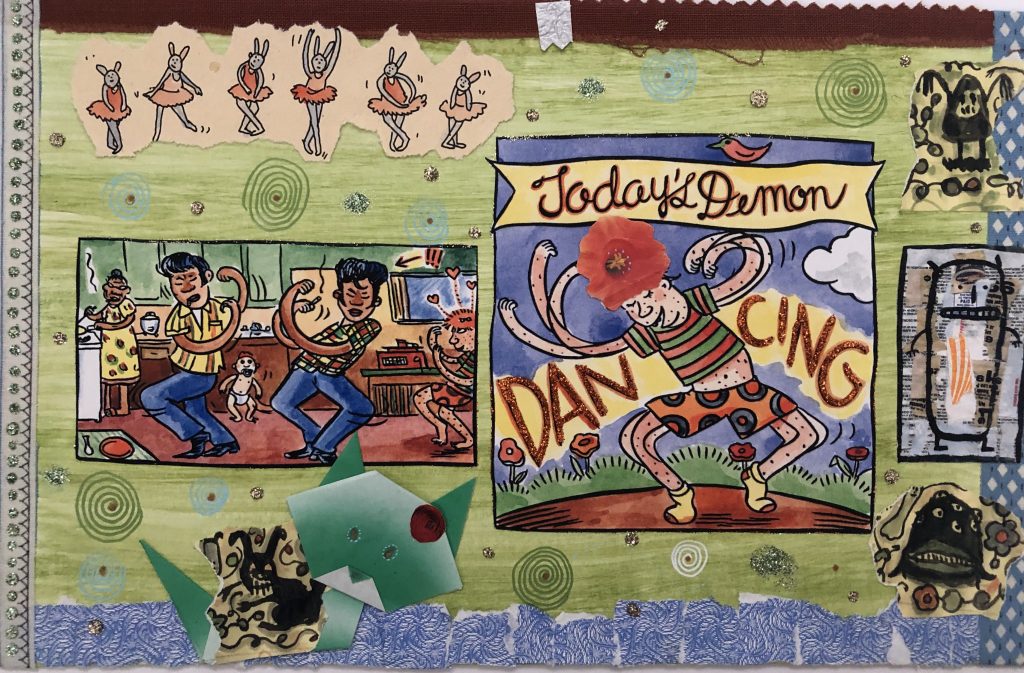 Bringing together an extensive lineup of more than forty artists—from celebrated to overlooked to up-and-coming—Chicago Comics: 1960s to Now has a focus on rediscovering the work of BIPOC and women comic artists. Comics, graphic novels, zines, original drawings, dioramas, films and installations intertwine. The exhibition is organized around four major sections: 1960-70s: The Underground; 1980-1990s: Alternative Weeklies (including Newcity), Comic Books and Zines; 1990-2000s: Graphic Novels and Community; and 2010-Now: Chicago Rising. There, works by Chris Ware, Lynda Barry and Kerry James Marshall appear alongside Ivan Brunetti and John Porcellino, and contemporaries such as Emil Ferris and Lilli Carré. 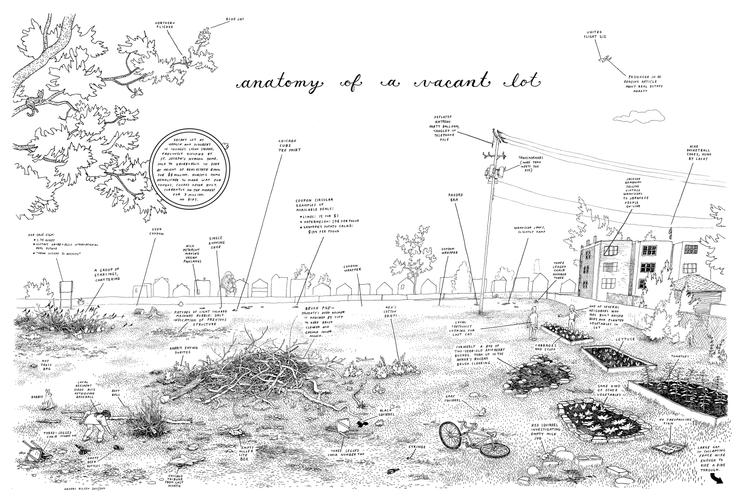 Anders Nilsen, “Anatomy of a Vacant Lot,” 2010-11/Image courtesy of the artist

“The show wouldn’t be truly representative of Chicago comics if it didn’t account for cartoonists of color. For most of the making of comics history they’ve been left out of the narrative. It’s self-evidently important to give a true accounting of the history of comics, asking why it’s remained mostly white for so long, and working to correct that,” says Nadel. To him, it’s important that viewers come away with a sense of how many different forms, subjects, styles and genres comics can encompass, how accessible the form can be, and how deeply embedded it is in Chicago itself. 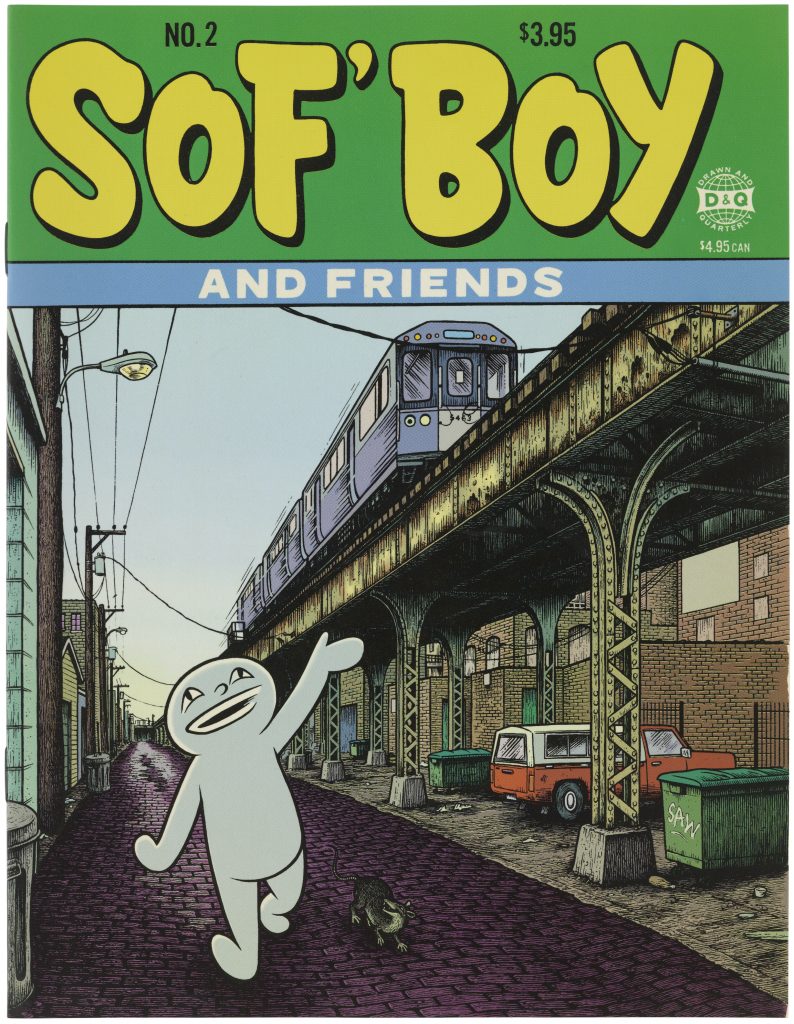 Archer Prewitt, Cover of “Sof’boy and Friends No. 2,” 1997, published by Drawn and Quarterly/Image courtesy of the artist

“I hope they enjoy the incredible amount of visual expression on display,” he says—and rightfully so. More than a piece of Chicago comics history, the exhibition has a design element that is impossible to disregard.

Enter Chicago-based architecture and design collaborative Norman Kelley, who re-imagined the space for visitors to feel like they are walking through a comic strip. The gallery space becomes a thought-provoking journey of rooms, gates and portals ready to be explored. This interactivity is integral to the narrative. Norman Kelley should know—through their work, they have re-examined architecture and design’s relationship to vision, prompting observers to look closer for years.

“Collaborating with designers Norman Kelley [Carrie Norman and Thomas Kelley] to create an environment and display mode that would bring to life so many diverse kinds of drawings and printed objects was a real treat,” says Nadel, who calls the exhibition a real feast for the eyes. “Aside from them being great collaborators sensitive to the needs of viewer and artwork alike, the process allowed me to really think about the different ways comics can exist in a museum, and to undertake unique site-specific projects with certain cartoonists, such as Edie Fake’s tremendous mural.” 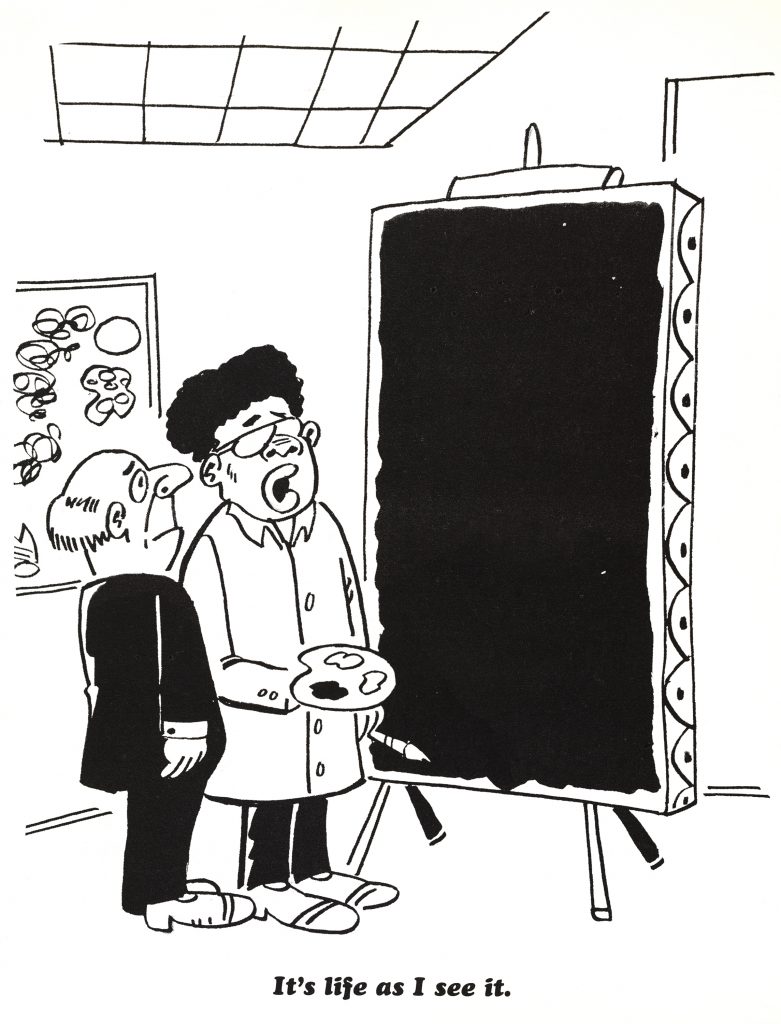 Thomas Kelley weighs in: “From the beginning, we were compelled by a mutual attentiveness to the art of drawing,” he says. “As architects, drawing is our primary communicative tool. So, naturally, we feel a kinship with cartoonists who, like us, draw to tell stories and build worlds. In addition, the scale of drawings at which cartoonists typically draw (by hand sometimes) is intimate—many of the original drawings in the exhibition are at a scale no larger than a letter-size piece of paper. This degree of intimacy is key to comics because they are also haptic objects: they require you to hold, leaf, and get as close to the work as possible to inspect every narrative detail. We were gifted with an opportunity to design an exhibition around content that spoke a similar language to our own and also required you to pay close, and proximate, attention. Therefore we believe our exhibition design serves less as an intervention to the MCA’s fourth-floor galleries, and more of an alteration of its existing scale.” 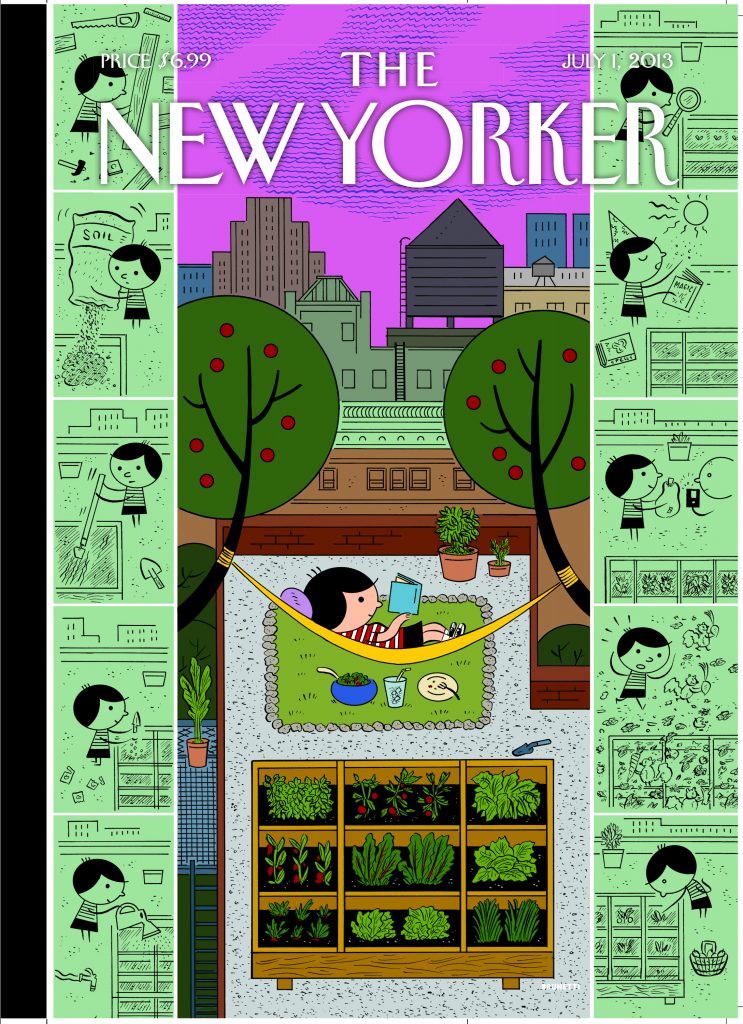 But the design process didn’t come without its own set of challenges. “There are approximately forty different artists in the exhibition. Some of the artists have had long careers, and some are just starting out. Some artists draw by hand, some draw digitally, while others use alternative media (maquettes, animation, costumes) to make their art. While place is the thing that ties everyone together, the work is truly varied. Difference was something we had to both contend with and embrace. Among other design strategies, we worked closely with a majority of the artists to construct specific proportions of space around their bodies of work, as well as devise color palettes that were specific to the art, as well as to the curator’s chronological and historical timeline,” Kelley says. 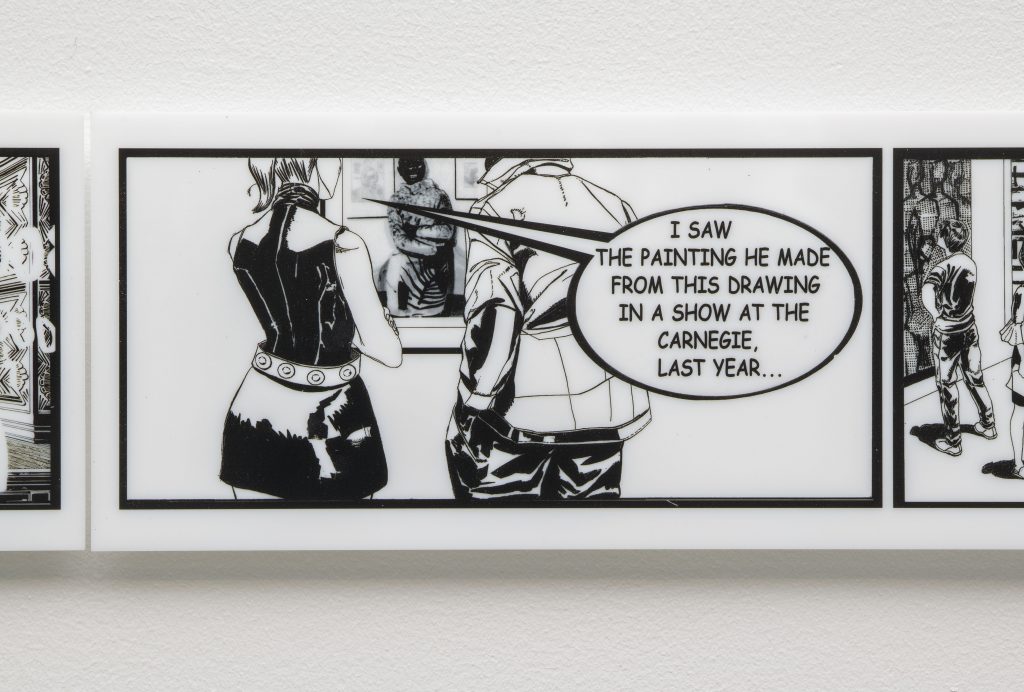 For Nadel, the biggest challenge was the obvious one: “I organized this entire exhibition almost entirely remotely,” he says. “So, in most cases I was not able to see the objects in person, visit the cartoonists, or any of the usual modes. Lots of Zoom, lots of emails and so on, but given the quantity of cartoonists and objects in the show it also meant far less contact with the cartoonists than I would have liked. That general remoteness has been a challenge,” he says. But the outcome made it all worth it. “It’s a real feast for the eyes, and one in print, rather than on screen, and moreover, a feast that can be continued at home via the books themselves.” 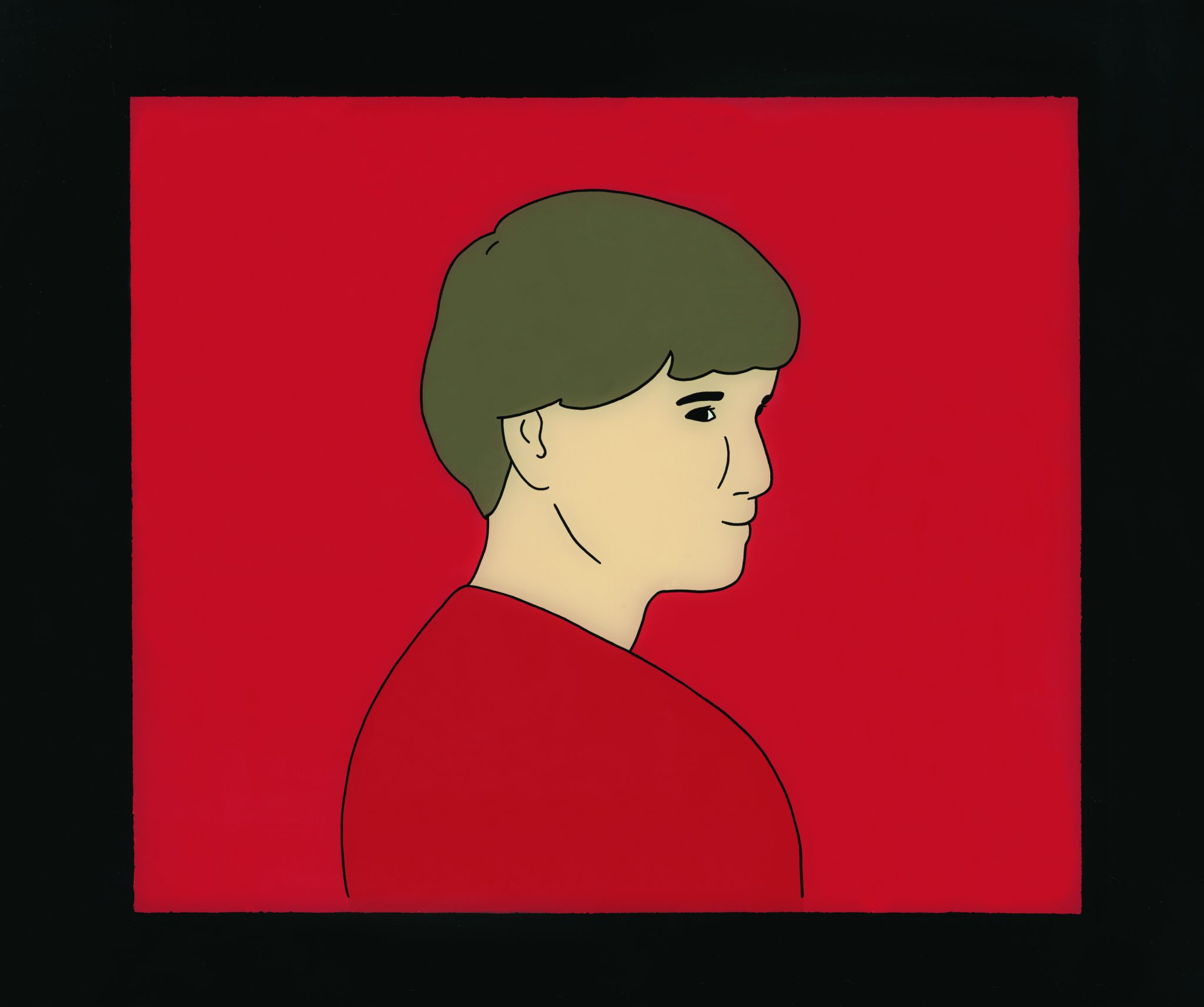 As for the takeaway of this exhibition, Kelley has an anecdote of his own: “When we first spoke with the curator, Dan Nadel, about the culture that surrounds comics we realized that the medium was never meant to be read in libraries or art galleries, but usually in transit, or in more intimate domestic settings, like smoky basements,” says Kelley. “We hope that the viewer is provided with a comfortable background to actually read the comics and become absorbed by the extensive lineage of Chicago’s contribution to comic history,” he adds. “Like music in a Hitchcock film, we hope that the space we’ve designed is secondary to the storyline.”

Chicago Comics: 1960s To Now: Through October 3 at the Museum of Contemporary Art.