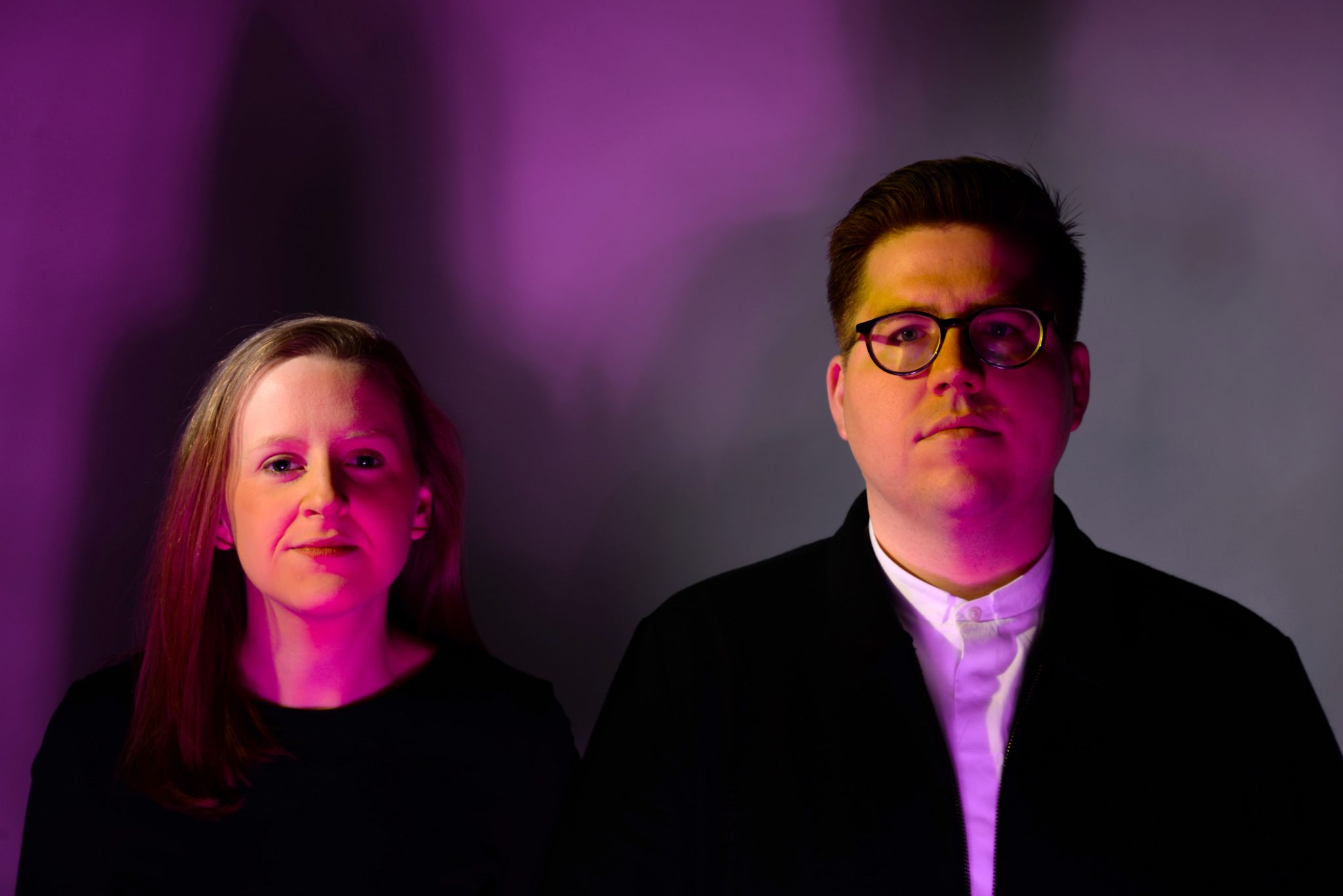 Editor’s Note: Sarah Herda, director of the Graham Foundation, spoke with Ashley Bigham and Erik Herrmann of the Columbus-based practice Outpost Office, whose eclectic output is characterized by experimentation, invention and open-ended speculation. Herda and Outpost Office discuss how design can open opportunities, the influence of Midwestern landscapes on their contribution to the Biennial and what a group of students had to say about their urban-scale paintings in North Lawndale. This interview has been edited for length and clarity.

Sarah Herda: To begin, please share a bit about your practice. Where did the idea for Outpost Office come from? What were the early projects that kicked off this collaborative exploration?

Outpost Office: Outpost Office is a small design collaborative based in Columbus, Ohio. The practice varies in size, but never less than two. We were living abroad when we started Outpost Office. We have some shared background, but we’re very different and Outpost Office was a way to explore overlaps in our divergent interests. We wanted to acknowledge the potency of living and working on frontiers, both literally and figuratively. It’s a disposition we try to bring to all our work.

The practice’s early work has focused in two areas: experimental platforms for gathering and speculations in and about the American suburbs.

Our earliest built project was Another Stack, an environment for hosting events, lectures, workshops, and everyday gatherings in a large commons space. The design included large-scale platforms, a circular projection drum, plants, and integrated lighting. The environment was rearranged on an almost-daily basis by users sitting, working, talking, eating, meeting, and even sleeping. We had a modest budget and very little time to be precious. In many ways, Another Stack was our first lesson in how architecture might be inexpensive, temporal and open-ended.

The project’s large platforms were fabricated with SIPs, insulated panels used in residential and commercial construction. At the conclusion of the project, we shared a few images with the panel manufacturer. We didn’t think much about it, but a few months later we were on their website and noticed our little project in their case studies catalog. There, amidst a series of conventional residential and commercial projects, was our funny little furniture system of clunky shapes and loud colors. With a fraction of the budget, we had somehow managed to expand the catalog, producing the unexpected from off-the-shelf tools and industrial-grade materials.

This reappropriation has continued in our work, such as our projects for CAB, which appropriate robots used for sports field marking to create colorful, architectural-scale installations. There’s something very satisfying in the misuse and misappropriation of tools. 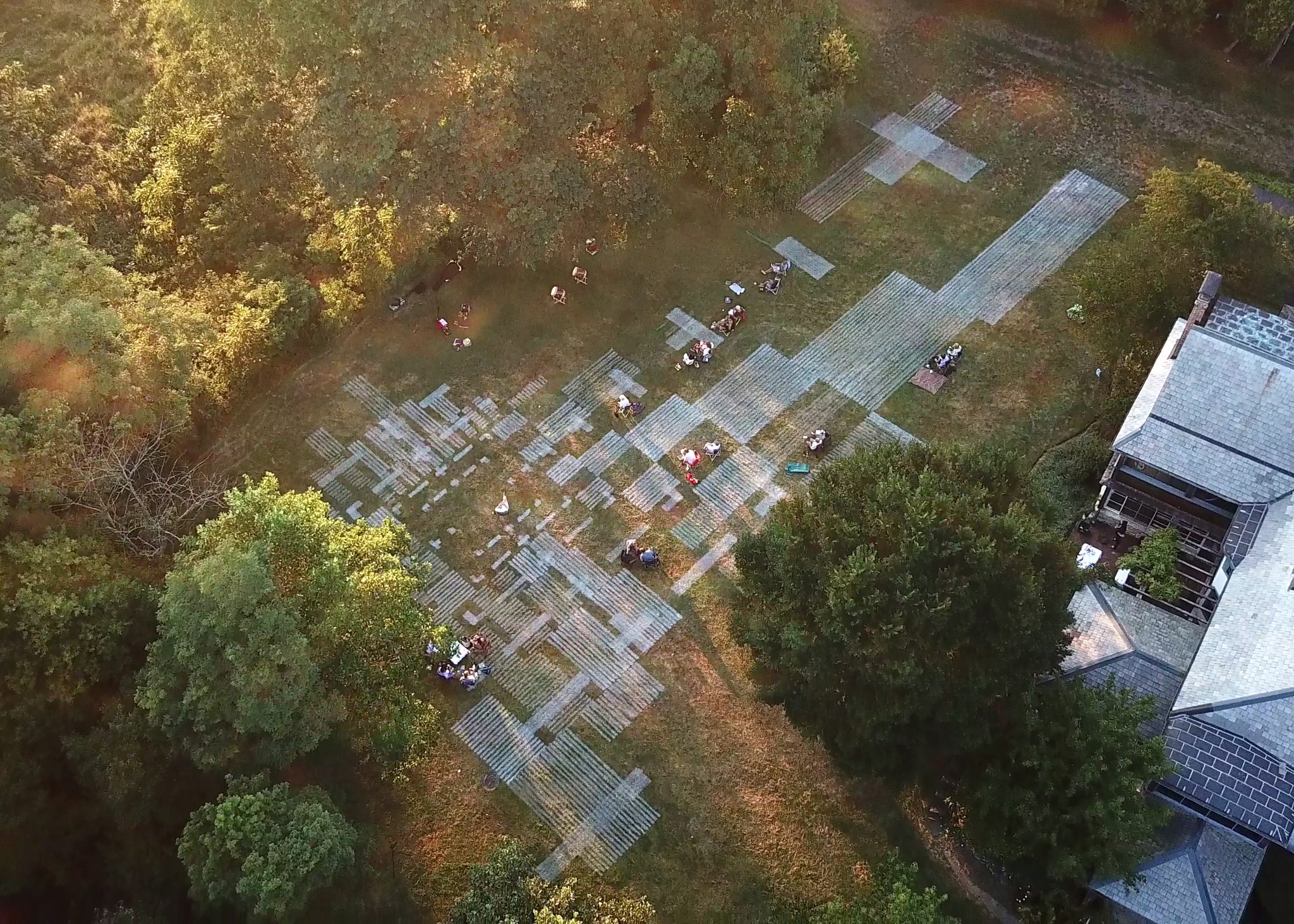 SH: Given that you are based in Columbus, Ohio, would you speak about the way the urban landscape of the Midwest inspires your work? How has this translated to your projects for “The Available City,” the fourth edition of the Chicago Architecture Biennial?

OO: We’re both from the American South. One of us grew up in the suburbs, the other in a rural farming community. We’ve always been interested in abstractions and patterns that organize our productive landscapes. When we drive our little robot into Chicago from Columbus, it’s striking how open and empty so much of the landscape is. You forget the rural and pastoral places that make living in such density possible.

It’s a bit difficult to imagine a project like “Drawing Fields” happening without the influence of Midwest landscapes as both a resource and inspiration. We both teach at Ohio State University, where we have access to sites like Waterman Farm, an agricultural and natural resources laboratory where we’ve secured a few modest plots to experiment with our drawing robot. At Waterman Farm, we’re experimenting with a lot of techniques for future work, while also working alongside colleagues exploring the impact of climate change and the future of farming. It’s cutting-edge research in our own backyard. We’re also lead researchers on a grant through Battelle Engineering at Ohio State that brings together experts in architecture, geodetic engineering and cognitive psychology. This context has already inspired a lot of our thinking for the painting at El Paseo Garden in Pilsen, which will focus on agricultural patterns and the colors of productive landscapes. 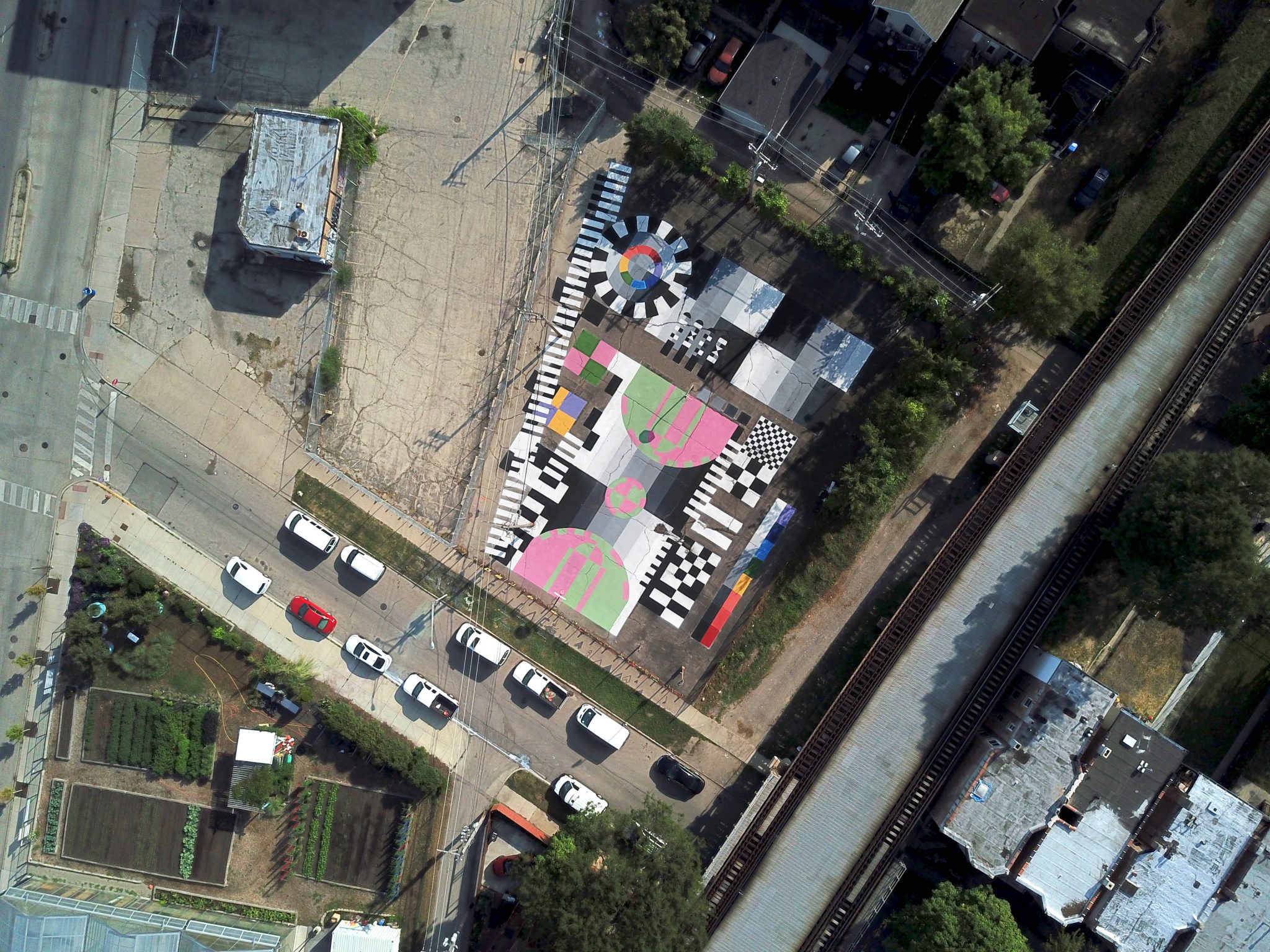 SH: Your work for the Biennial seems to respond to many aspects of urban design and culture in Chicago—from the grid layout to the prevalence of hard-surface playlots. How did the city itself translate into your “Cover the Grid” project installed in Bell Park, North Lawndale and El Paseo Community Garden, Pilsen? And what are your hopes for the future of these projects in Chicago? And how might communities around the world adapt “Cover the Grid”?

OO: David’s “Available City” project encourages an understanding of cities as “living, breathing, ever-changing, mutable and full of possibilities.” We were certainly inspired by the physical features of the city, but understanding the culture and context of these “available” spaces means working closely with partner organizations like Under the Grid and the WACA (Westside Association for Community Action) in North Lawndale and El Paseo Community Garden in Pilsen. These conversations introduced us to the history of these sites and stories of their possible futures. The WACA Court, for example, is already used by a local church group for weekly block parties and there are long-term plans to eventually resurface the lot for safe play in partnership with the WNBA. It’s a special place and already functions as a commons in the community.

One of the things we spoke candidly about with our hosts in North Lawndale is that we were there to continue the conversation… not start or end one. We’re fortunate to be working on these two sites and each of our proposals had to find its place in the community’s evolving visions for the space.

Our installation at Bell Park (or The Lot or WACA, depending on who you ask) in North Lawndale, for example, is based on calibration patterns and color-checker charts… all the tools a photographer uses before any action takes place. Our team spoke a lot with the community about how this urban-scale prototype might be understood as an initiating act with less focus on conclusions or finality. In other words, how can a design open more possibilities than it closes? Our urban-scale painting is there to test how the site might be used in the future. We worked with students from the Spark Arts design camp to understand how the site is currently used and get their input on everything from programming to patterns and colors. We brought our first design to the students last month and they were tough! They pointed out, for example, that the basketball court was the most important community asset and had to be visible from the train. They were, of course, correct and the design is better for it. Our paintings are installed with a VOC-free, temporary paint that will gradually fade away with exposure to sun and rain. This work plans its own obsolescence and as it fades away we’re hoping the conversation about the site’s future only intensifies. David’s metaphor of choice is jazz improvisation. We’ve had our chance to perform, so we’re thinking of the site as waiting for the next solo. 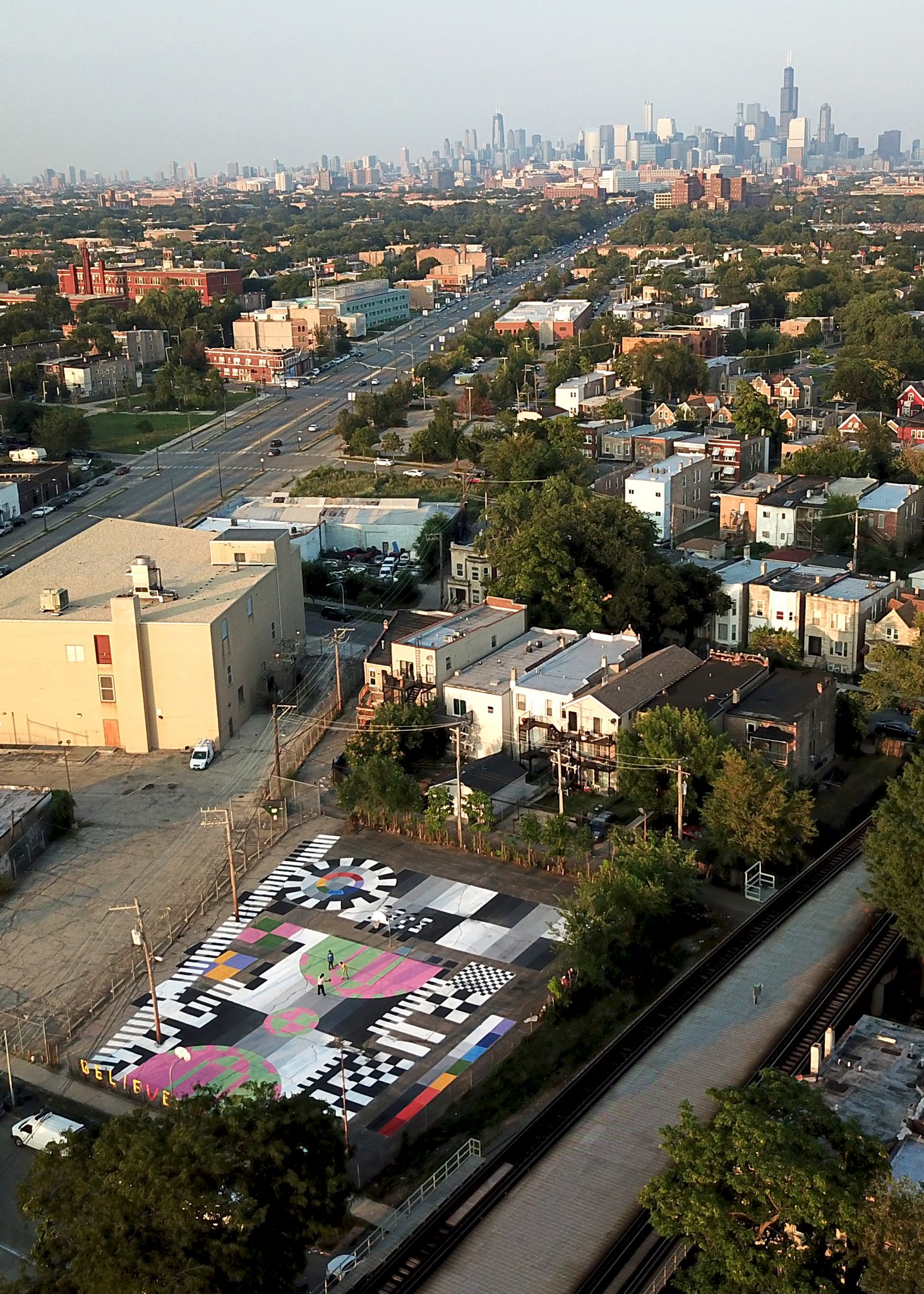 SH: With “Cover the Grid” you create architectural-scale paintings on vacant land using GPS-guided robots that are typically used to paint temporary sports fields. This technique, one that you have used previously in your work, is an interesting variation on the themes within “The Available City.” Are there new approaches for this specific work that were prompted by working with the Biennial on this project? What is it like to watch one of the ground paintings be created? I’m envisioning a robot ballet.

OO: Our practice has been researching color for the past few years, particularly the way architects typically use color. In addition to the robot, we’re also using a large sprayer to apply generous regions of color. The desire for maximum saturation and color patterns was a request we heard early on in our sessions with local high school students. Typically in architecture, color is used as a kind of coding. You might distinguish between rooms by painting them different colors. Or perhaps you’ll paint your shutters and trim one color and the siding another. We didn’t want to use color in this way. We didn’t want to saturate the court with one color and distinguish between the commons and the neighborhood. We wanted the color to create a kind of openness.

To do so, the design highlights existing colors around the context with a prismatic cacophony of colors. The patterns’ gray tones, for example, pick up on the proliferation of gray around the site, while also bringing attention to the yellowish, almost ochre tone of the actual asphalt. We hope this dramatic range of colors produces moments of synchronicity between the design and life in and around the commons, like a pedestrian walking through the site in a red shirt or dribbling a bright orange basketball.

The ground paintings are indeed really fun to watch. The robot attracts a lot of attention from passersby. We’re hoping people make plans to join us for the opening Block Party on September 18. We’ll bring the robot and paint some additional elements on the site. 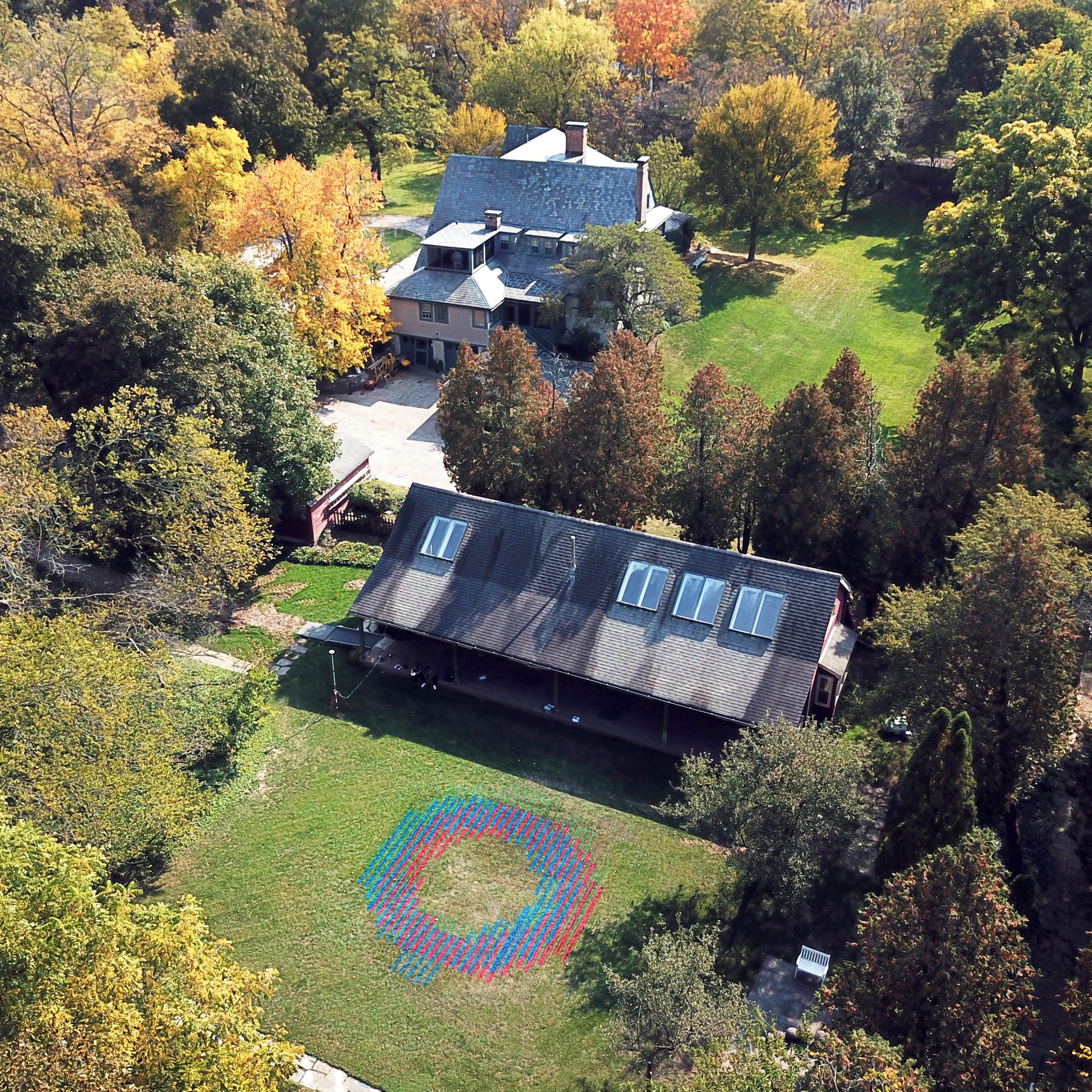 It’s funny you mention the balletic qualities of the robot. Our previous project with robotic drawing, “Drawing Fields,” took place at Ragdale, just north of Chicago. We thought of our Ragdale paintings not as installations, but as performances. On softscapes, the paintings only last a couple of weeks, so we returned three times to paint new patterns. At that time, we actually had the privilege of working with a number of dancers, including contemporary performer Sara Zalek. Sara was very eager to perform with the robot and adjusted her performances and movements to the idiosyncrasies of the robot’s movement and syncopations. Her duet with the robot was pretty extraordinary.

SH: As a key part of the Biennial’s mission is to create an international forum on architecture and urbanism, what are some topics you would like to see in future editions?

OO: David has set a template for future editions of the Chicago Biennial to more directly engage the city and we’d love to see that legacy continue. We’ve been spending breaks during the installation exploring the North Lawndale neighborhood, learning more about its residential areas, including the extraordinary greystones. There are so many ways architects could engage existing residential infrastructure while speculating on ways to live in America today. How will we live in the future and who will be able to afford it? How do we make architecture more accessible to all?