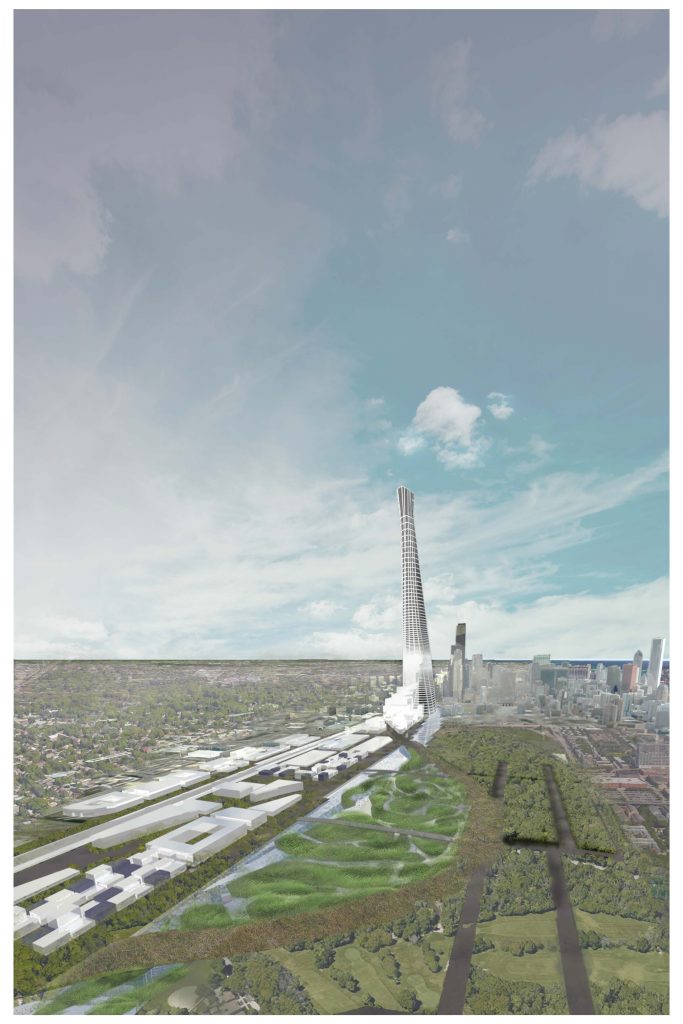 Every year, architecture firm Perkins+Will, known for its commitment to sustainability and innovative research and design, hosts an annual competition where emerging talent and tested experience meet in a love-fest-cum-merciless-critique of ideas and plans.

Now in its thirteenth year, the competition, overseen by the firm’s Design Leadership Council (DLC), is open to young architects across its twenty-four national and international offices. This year, the competition takes on added value and visibility as part of the Chicago Architecture Biennial, in an exhibition titled “The Second City’s Second Coast: An Intervention Along the Chicago River,” in partnership with the MAS Studio exhibition, “BOLD: Alternative Scenarios for Chicago.”

The DLC competition challenges young architects to devise plausible solutions to real-world design problems, with the larger purpose of creating a vehicle for ideas, promoting a culture of design, and enhancing the firm’s legacy of innovation.

The challenge this year was to design a plan for one of the largest remaining parcels of undeveloped land along the Chicago River: 200 acres of abandoned, contaminated land, south of the old Main Post Office and north of 18th Street and Chinatown—an unusual site that spans both sides of the Chicago River. Perkins+Will is currently working on a residential development project just south of the area, near Bertrand Goldberg’s River City.

A total of sixty-two entries were submitted from nineteen offices, including Chicago, Dallas, Los Angeles and Minneapolis; Dubai, London, São Paulo and Toronto.

The jury praised the “convincing, credible and beautiful” architectural expression of the design, which incorporates a light-rail system linking green technology higher education institutions; mixed-use development, including mixed-income housing; wetlands infrastructure with pedestrian bridges; and tree-lined, pedestrian friendly walkways for community gatherings, all with an elegant economy of space. A central structure that houses a mechanism for decontaminating river water, using a surrounding network of wetlands, is an ingenious proposition. But the structure, a 3,000-foot-tall financial center that would enable Chicago to “reclaim [the] title of hosting the world’s tallest building” left me thinking that I surely cannot be the only one who is over contests sizing up whose is biggest. 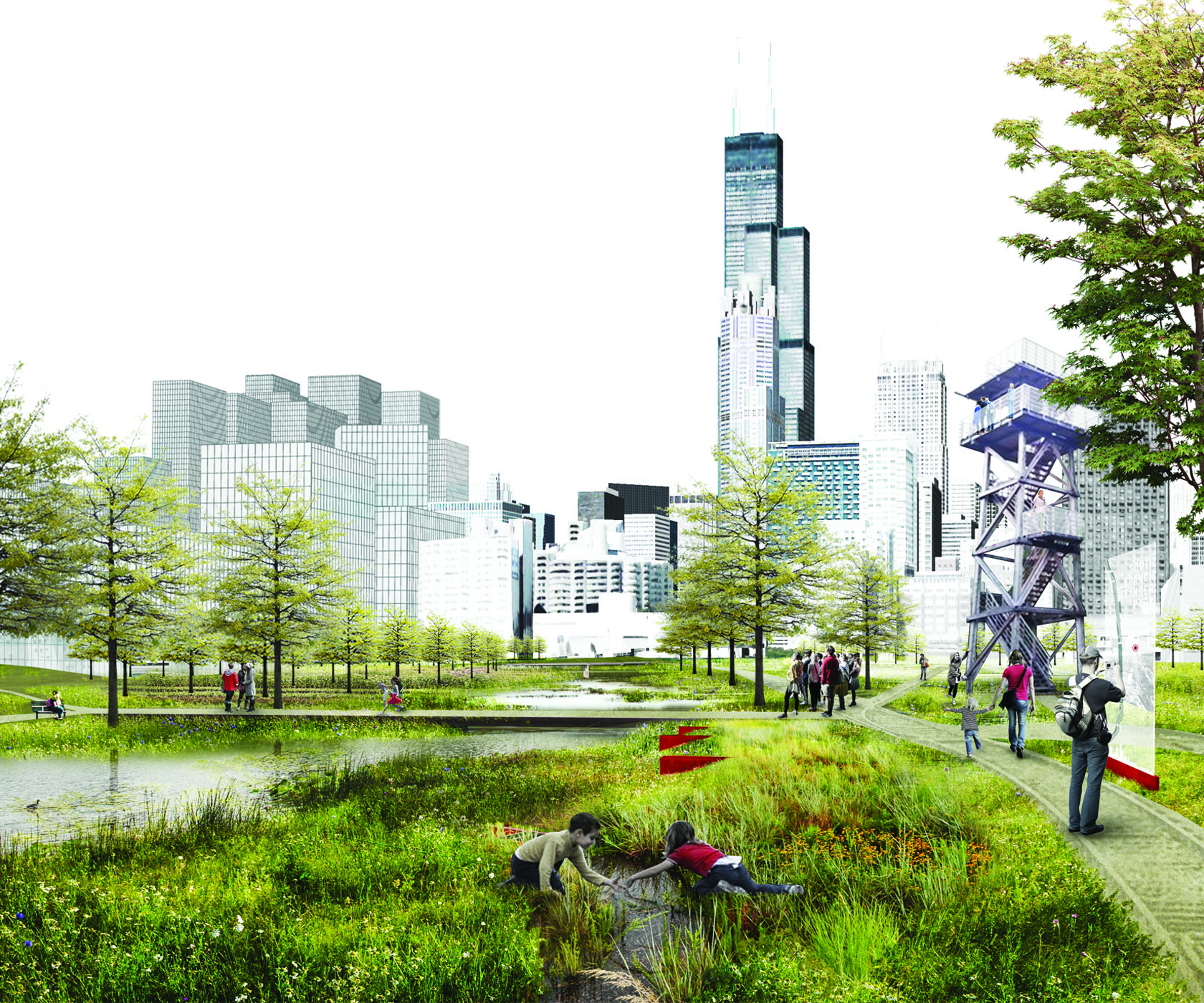 The second-prize winner, “South Branch Succession: Reconnecting People + Revealing Place in Anticipation of a Resilient Future,” by Chris Loyal and Lauren Fraley from Perkins + Will’s Atlanta office, had an inspiring design premise. The design incorporates elements of the city’s history and topography and weaves them into a dynamic landscape of mixed-use development, including commercial space and artist studios. The design includes an extended riverwalk, an amphitheater and pedestrian bridges, bioremediation wetlands and phytoremediation gardens, and repurposed warehouses, in a way that allows for diverse perspectives on the site and the city. Using the concept of a “tell” or “tel,” an Arabic/Hebrew term for a type of archaeological mound found throughout the Middle East, created by centuries of human occupation and abandonment, the design concept allows the land to reveal its own layered history and meaning.

Third-prize winner, “Switchrail,” by Scott Hefner, Ian Zapata, and William Sendor, from the Research Triangle Park office, proposes a repurposing of old rail lines to create a movable network of programs and amenities, a “massive transformable park in which rail cars outfitted with trees, benches, band shells, restaurants, kayak rentals, all move along the network of rails.”

Like the B-side of a forty-five record that has the most amazing tune you never heard, a few of the designs that didn’t make it to the finalist stage were intriguing. 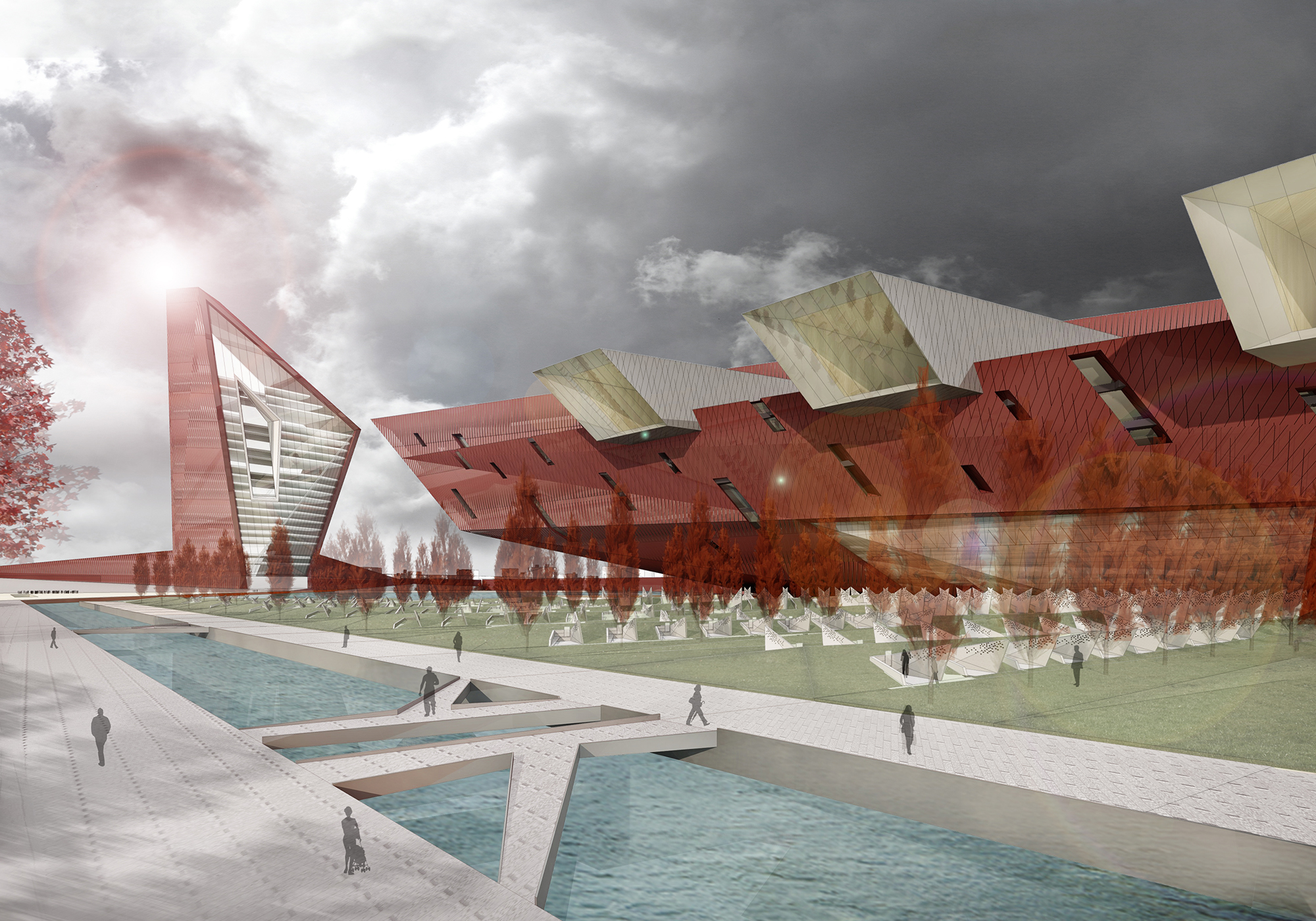 One, “Death in the White City,” by Edwin Harris and Billy Askey from the Research Triangle Park, certainly the most provocative project on the shortlist, takes its title from Erik Larson’s bestseller, “Devil in the White City.” Two ungainly red structures loom like elevated gashes on the landscape, spanning the Center of Violence trauma center, Garden of Tragedy burial grounds for victims of violence, Tears of the City reflecting pool, and Center for Community Action. One panelist called the text “salacious.” Metter, jury lead and moderator, judiciously mediated the discussion with a reminder that participants were asked to address a specific issue “endemic to a city’s development,” and that for many people, the city they live in is a city where the danger and consequences of rampant violence dominate people’s lives, and the landscape, twenty-four-seven. That this is awful to read and imagine tells us something about the real-life world we have created and that many thousands of people are forced to inhabit.

And the project asks an important question: “How can we focus on mixed-use development, on the intersection of commercial and public values, when we cannot protect our most precious resource—human life?”

One of the motivators for Perkins+Will in selecting the site and publicly promoting the competition is the desire to see this land developed as a nucleus for next phase growth of the city—a kind of grand, experimental project, on the scale of, but at the other end of the spectrum, from the fun, flashy, artistic gorgeousness and cultural glamour of Millennium Park. Something more earthy, practical, exploratory and reflective, that nurtures, on a deeper level, human beings and the earth on which our lives depend, as well as the vitality of the urban center we inhabit.

On Monday, November 9, Iker Gill and Perkins+Will will host the program, “Bold Studio Visit: Perkins+Will,” as part of the Chicago Architecture Biennial. Ralph Johnson, global design director, and Todd Snapp, design principal, will discuss key research and speculative projects in architecture and urban planning of the firm. Click here to be added to the waitlist for the event.

For more information about the Design Leadership Council competition, the shortlist and finalists, visit dlc.perkinswill.com.