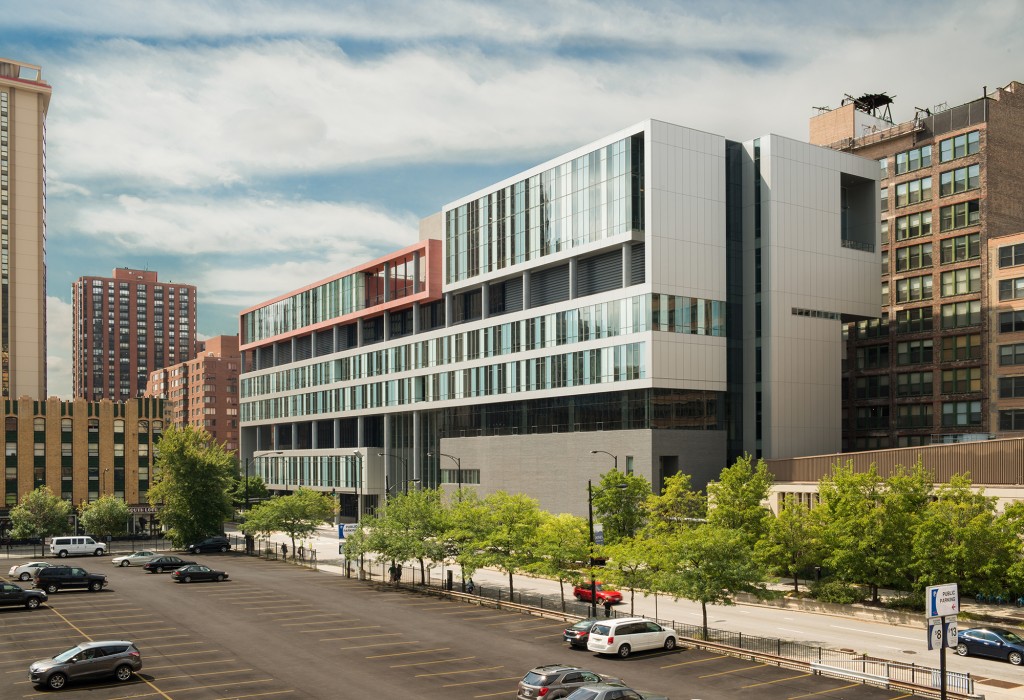 Jones College Prep at 700 South State is a selective enrollment high school and a top academic performer. The Chicago Tribune ranked Jones College Prep as the fourth best high school in the Chicago area in 2012. Since 1967, Jones College Prep was housed in a Brutalist, bunker-like building in the South Loop that was originally designed as an office building. This changed with the completed construction of a massive addition, which opened August 26 to 1,200 students for the 2013–2014 academic year. The new building has state-of-the-art-facilities of both education and recreational uses that will undoubtedly enrich the academic experience for the student body. However, not everyone is pleased, especially the local South Loop community, which has long advocated for a neighborhood high school, only to get snubbed again because Jones College Prep is a selective-enrollment high school.

The local architectural firm Perkins+Will, a company with an extensive portfolio of educational buildings, won the Jones College Prep commission. A primary challenge was to include all needed facilities on a small site. The solution was to build up, to seven stories high, in addition to the school’s campus extending over an entire city block. Nearby, Roosevelt University’s “vertical campus”(their branding phrase), at thirty-two stories tall, suggests that we’re seeing a new trend for skyscraper schools.

On the new Jones College Prep building, the halfway-exposed gray pillars give the building an upward lift while three rows of blue windows spread horizontally. Despite a welcome splash of red, the gray, white and blue color palate of the building is unfortunately uninspiring. The façade has visual interest with a series of cubic depressions that break up the mass. In its entirety, the building comes off as playfully tectonic.

Upon entering the building, you are greeted with an airy three-story lobby awash in natural light coming in from the wall of windows. In the center of the lobby are metal detectors and backpack screening machines. The 278,000 feet of space have been fitted for maximum capacity and uses. On the first floor is a 450-seat theater. On the top floor is a stunning gym and swimming pool. In between are the classrooms, art studios, science labs and a library media center.

The architects created green spaces with landscaped, semi-enclosed terraces where students can grab some fresh air. From seeing the facility’s impressive, modern design, it is difficult to grasp that this is a Chicago Public School and not a tuition-based institution.

Although Jones College Prep is located in the South Loop, it is not of it. The selective-enrollment high school accepts students from throughout the city based on academic achievements, not geographic proximity. With the population growth of the South Loop, the community has long advocated for a neighborhood high school due to limited educational alternatives. Second Ward Alderman Bob Fioretti, speaking on behalf of his South Loop constituency, was quoted on Chicagotalks as saying, “CPS has failed to give them an adequate school” and that “middle class families are leaving the area.” Jones College Prep has agreed to set aside a small block of seats for students from the South Loop.

It took ninety one million dollars to realize the new Jones College Prep building. The money came from a South Loop tax increment financing (TIF) district. This is a public financing method based on using future gains in taxes to fund current improvements. In theory, the modernization of Jones College Prep should generate more tax dollars through secondary effects such as increased real estate prices in the school’s vicinity. However, Jones College Prep is not a neighborhood school where students of the South Loop are guaranteed enrollment and its benefits. Thus, it is difficult to see how South Loop real estate values will rise from a school they cannot use.

The new Jones College Prep addition is a dramatic upgrade for the school. Students lucky enough to be enrolled will have the opportunity to learn under conditions the majority of Chicago Public School students can only dream of. Meanwhile, the South Loop continues their advocacy for a neighborhood high school.