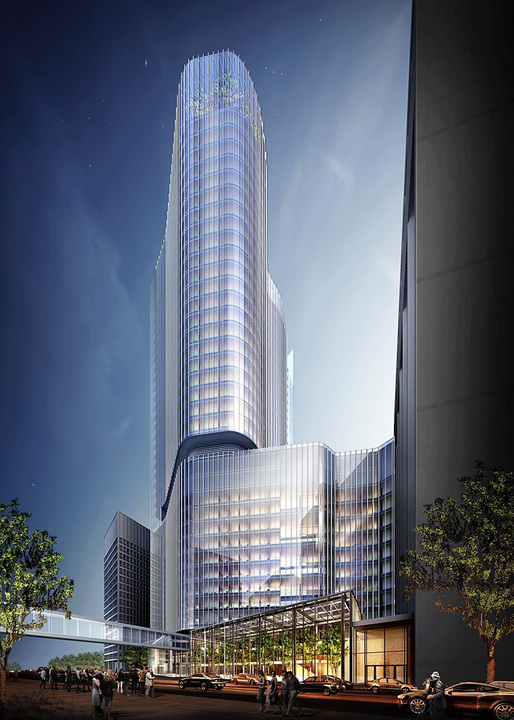 Buildings are born and buildings die. Prentice Hospital was born in 1975 as Bertrand Goldberg’s innovative (for its time) housing for women’s healthcare, and is now undergoing a slow death by demolition. Northwestern University has selected the final design for the building that in 2015 will start to rise on the Streeterville site, in a demonstration of architectural reincarnation. The design, selected from among three finalists, for the Biomedical Research Building delivers both drama and disappointment.

Chicago-based firm Perkins+Will, led by design director Ralph Johnson, won the commission. Johnson has a long healthcare-project portfolio, including the monumental (and Prentice-inspired) Rush University Medical Center in Chicago. Northwestern University desired a building of the highest standard of both function and form to give it an architectural identity and to represent the quality of healthcare by the institution.

At the same time, Johnson understood that the target audience for this project is research professionals. Johnson’s design approach was driven by the building’s function. Quoted in a Northwestern press release Johnson said, “The generator from day one was the lab plan for the building,” and that’s when “the shape of the building starts to happen.”

The building takes cues from its surroundings. The height is similar to its neighboring skyscrapers. The glass is a conservative light blue. The building faces north onto Superior Street, Northwestern University’s research corridor. An inviting lobby is airy with a variety of seating and indoor landscaping to promote interaction among staff.

The façade consists of two contrasting elements. To the west, the building has a curvilinear setback that creates a floor-by-floor connection with the Lurie Medical Research Center. To the east, the façade becomes more angular, concluding with a pronounced razorblade-like form. The Biomedical Research Building, with its fluid design, makes it one of Northwestern University’s most attractive buildings. Construction of the initial building is expected to be completed by 2019.

A later tower addition, to be constructed after the completion of the main building (although no timeline has been proposed), approaches something iconic or monumental. The cylindrical tower is set back to allow for a green space on the roof of the other building. The angular element on the east side looks powerful, like a knife slicing the air. The tower symbolizes Northwestern University’s expectation of growth, progress and expansion. Nonetheless, the Biomedical Research Building will not be completed for at least a decade.

The visual focus is on the dynamic north side of the building, and for good reason. In striking contrast the south facing façade consists of a disappointing blank stare, as if the building had turned its back to the south side. The generic and banal presentation, designed for both the initial building and tower expansion, is a design fault that weakens the otherwise bold design of the building. There are no architectural elements to describe here. Worst of all, the curtain wall blocks off all the drama occurring on the other side of the building. Gordon Segal, Northwestern’s chairman of the educational properties committee described in a Northwestern press release that the building was, “a work of beauty” with “a poetry of design.” He must not have seen the southern façade.

In this project and its predecessor, architecture has become deeply intertwined with healthcare research. With inflexible plans for labs, Johnson designed a building of both efficiency and conflict. Among the building’s east-west balance, the north-south facades unfortunately cannot be resolved. Still, the Biomedical Research Building should provide advances to health and science within a worthy building. (Paul Kulon)